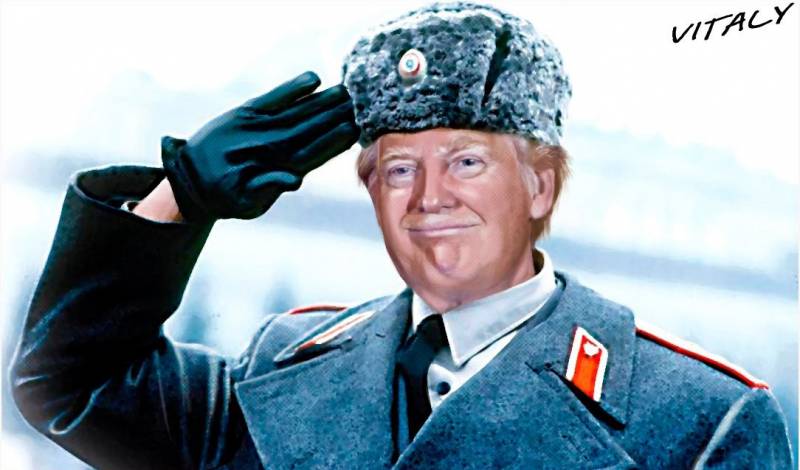 In America, something like this happens that it was impossible to imagine yesterday, our Americanists sigh, and even America’s patriot Nikolai Zlobin cannot argue anything and only grit his teeth in anger: “America plays for a long time” ... “In America, there is a political war” - other Americanists open the secret of Zlobin and sigh again: the whole world will feel bad. This is why the world will be bad if America finally lags behind the world with its fake democracy and homosexuality?

Donald Trump, joining the White House in Washington, did one great thing for the world, and Russia, dubbing the American media the world fake news, and rightly so, defending his honor from their lies. With this he protects the whole world and Russia from the world fake news. For this, he will someday be erected monuments throughout the world, as the most honest president of America. In all other matters, including the love of the Pentagon, Donald Trump is the usual American billionaire.

Of course, we used to know about the world of fake news, and talked about it, but Donald Trump told America about it, and showed by his example how they lie: even the president of America is not protected from their attacks, because powerful patrons and US special services 17. So, the fake news can even label the “agent Putin” label on the US president! This is the visible part of the political war in the United States.

Translated into Russian, with the arrival of Washington’s Donald Trump in the White House in America, Perestroika began. The pillars of society are falling: CNN, the Washington Post and the New York Times, and everything related to them: they lie to society. The entire American media main stream is lying - this has become a fact of American public life, and will have serious consequences. By analogy, this is tantamount to publicly announcing the newspapers Pravda, Izvestia and others as liars by General Secretary Mikhail Gorbachev, with a subsequent political war between them, which was not even in the Perestroika USSR.

In such a situation, the US is not important to interfere, even the RT channel in America, with the staff of American journalists at 150, becomes a log for the Congress in the eye, and it is repressed. Because these 150 Americans are on the air enough to destroy the entire US media empire. Why? Skinny fame news fame does not run, but flies! The empires are destroyed only from the inside, this is an old truth, therefore all the countries of the world go towards America, except North Korea.

Our political analyst in Washington, Dmitry Simes, remarked: "So far there has been no painful response from Russia for the United States." Although the Congress is provoking Russia, as it may, with sanctions, have outraged even the national flag of Russia, President Vladimir Putin is not provoked so that the US will not be distracted from its political war.

Anyway, Donald Trump resisted under the onslaught of Congress and fake media, and the latter lose their reputation. While the attacks on Trump continue, the threat of impeachment is frozen. Power in America is in a state of stalemate, which was manifested at the APEC forum in Vietnamese Da Nang, where the US could not offer anything to the world. Secretary of State Rex Tillerson seems to have lost control of the State Department, and he failed the meeting with Putin announced by Trump. The political war in the United States reached Danang.

The anonymous neocon elite ruled the United States, escorting their presidents through the media, by continually brainwashing society. On Hillary Clinton, this powerful imperial machine was jammed by Donald Trump, the propaganda media machine was stuck with a fake news about “Trump - Agent Putin”. The usual hypocrisy of the world American media has stopped working. Here's how now the anonymous rulers of “American democracy” rule America, not to mention the whole world?

Our director and political scientist Karen Shakhnazarov noted that the hybrid war that started between the US and Russia, with all its acuteness, is not perceived as scary as the former cold war between the US and the USSR. Why? Because now in the US - Perestroika. But Russia, albeit in strategic defense, has already been restructured, has become another country: Russia has different faces, mood, intellectuals and media than in the USSR, and they successfully resist the United States even on their territory! Finally, Russia has Vladimir Putin: for a long time “we were unlucky for kings” and finally we were lucky.

Ctrl Enter
Noticed oshЫbku Highlight text and press. Ctrl + Enter
We are
Results of the week. “If I am leaning against a warm wall in a quiet place, then I’m still nothing at all!”Reports from the militia of New Russia for 27-28 September 2014 of the year
Military Reviewin Yandex News
Military Reviewin Google News
69 comments
Information
Dear reader, to leave comments on the publication, you must to register.