How insidious Russians made Catalonia a “new Crimea”

November 15 2017
14
Madrid is discussing with the “European partners” another “Russian intervention”. It is clear what: the Catalan events "provoked" the Kremlin. Already it came to comparison with the "annexation of the Crimea." Apparently, Spain will soon face the "green men." 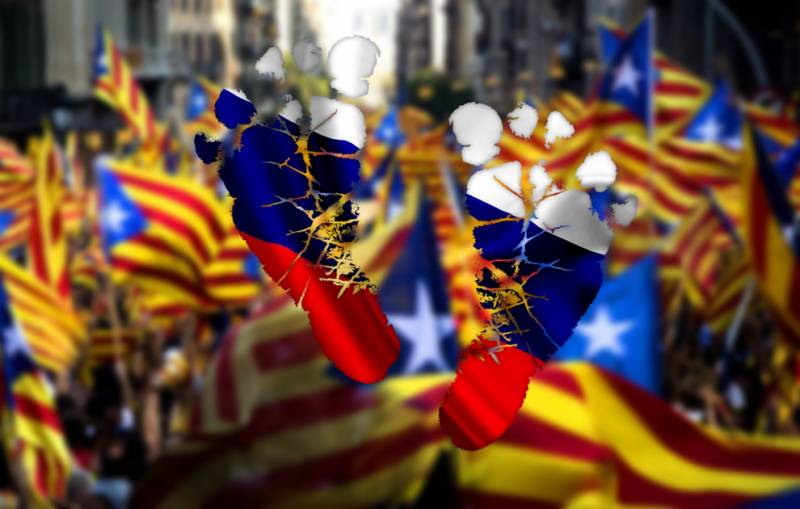 What was said in the announcement of the material is not a joke at all. More precisely, not quite a joke. Indeed, Alfonso Dastis Quesedo, the Spanish foreign minister, announced at the meeting of the foreign ministers and defense ministers of the EU with the EU partners about the “interference” of Russia in the affairs of Spain. The statement was very formidable. We are even talking about defense!

Mr. Quesedo made his speech immediately upon arrival at the meeting of European ministers. According to him, Madrid wants to discuss with the European partners the issue of “disinformation” that has developed around the “Catalan crisis”.

“We will discuss many issues, the most important is the launch of structured cooperation in the field of security and defense,” the head of the Spanish Foreign Ministry quotes. TASS. “I will touch on the topic of intervention, or how questions about disinformation, manipulation around the referendum in Catalonia and the subsequent course of events developed ...”

In the Russian embassy in Madrid, reports TASS, noted that reports of other Spanish media about the presence of a “Russian trace” in the Catalan crisis do not contribute to the discovery by readers of the press of the true causes of problems in the named region. “In Russia, as in Spain, journalists have the freedom to formulate their own opinions, but our journalistic culture does not allow for the dissemination of fake news"- commented on the latest Spanish" reports "in the diplomatic mission.

This rebuke of diplomats appeared, of course, not from scratch. For her were the most compelling reasons.

The aforementioned Alfonso Dastis said last week in an interview that “there are very convincing reports,” and their data “testify” to the fact that “certain actions” addressed against Spain are “Russian sites or hackers”. These actions can "destabilize" the entire European Union. According to the minister, who leads the newspaper "El Pais"“Russia has already been interested in such processes for some time, because it feels“ uncomfortable ”against the background of the“ unity ”of the project of a united Europe.

In view of this assessment of the Kremlin’s strategy, Mr. Dastis said that the actions of the “Russian sites” would be targeted: they would be “studied”, and not only in Spain, but also at the EU level. The result of the “study” will be the elaboration of a “opposition to propaganda” strategy that Russian hackers “lead against the EU.

In another material of the same "El Pais" gentlemen "students" pointed to an even greater number of "facts" indicating the actions of not only Russia, but also ... Venezuela. Hackers who are interested in the freedom of Catalonia, are found there.

The Spanish government stated: “intervention” in Catalonia is organized by “hackers” from Russia and Venezuela. This is reported at the very beginning of the material, and in the title too.

According to members of the Spanish government, the version of the intervention of hackers, "prescribed" in Russia and Venezuela, is "convincing". It was the hackers that caused the “institutional crisis in Catalonia”. There are no specific arguments pointing to traces of hackers leading from somewhere in the suburbs of Moscow.

Nevertheless, according to government spokesman Iñigo Mendez de Vigo and Defense Minister Maria Dolores de Cossedal, the topic is serious. “This is a serious topic,” said Mendez de Vigo, “because democracy must face the challenges posed by new technologies.” Such technologies, the government spokesman added, “know no boundaries,” and therefore “the problem must be solved at the level of the European Union.”

It is strange that this lady did not stamp her foot.

True, a softening clause followed. They like to “make a reservation” in the West when there is no evidence.

“This does not necessarily mean that we [the government of Spain] are already convinced that this is the government of Russia. Therefore, we must act with maximum caution. It should be with the utmost clarity determine what their [hacker attacks] origin. They come partly from the territory of Russia, and partly from other [territories], for the European Union they are also outsiders. Now this is being clarified. ”

Here it was, again, without specifics, an indication of Venezuela. These are not the words of the Minister of Defense, but the message of the newspaper. According to the publication, “later” some “sources in the government” revealed that one of these “outsiders for the EU” territories is Venezuela. Why Venezuela needed to "break" Spain, getting into the affairs of her and Catalonia, is not specified. Maybe Putin ordered? There is no information on this account. And probably will not. There is no mention of how the Spanish specialists revealed the “Russian trace”.

Even in the USA, no one is still sure about the 2016 elections of the year: have the Kremlin-hired fighters of the invisible front "visited" there? No real facts and arguments simply do not exist. Also, it has not yet been proved that Mr. Trump was involved in some kind of “conspiracy with the Russians”, about which they wrote a lot in the large (not yellow) American press. Trump's other opponents have already agreed to impeach the president, but no compromising evidence has yet been found. But the vigilant Spaniards proved everything in a matter of days. Doubtful? Impossible!

What do Russian experts think about this?

According to Art. Lecturer of the Department of Foreign Regional Studies and Foreign Policy of the RSUH, Vadim Trukhachev, who answered questions "Free Press", the external factor in the Catalan events is important, but it comes down not to Russia and not even to the EU, but to internal reasons.

“The role of Russia is approaching zero here, the role of the USA is minimal. Hackers here can not affect anyone for anything - even from Mars, even from Venus, ”the expert says ironically.

“The EU, naturally, could not stand aside here, because Spain is part of it. But I would not exaggerate his role. What is happening in Catalonia is determined primarily by internal causes, many of which are not one hundred years old. ”

As for the “structures of Soros”, about which they wrote earlier that they allegedly could support the supporters of the branch of Catalonia with money, and also collected data on the “pro-Russian” journalists and political scientists of Spain, the expert said on this subject as follows: “To collect information about and political scientists of the structure of Soros, of course, could. As well as to assist the supporters of the independence of Catalonia, they too could. In the end, the international adventurer Soros (as it seems to him) seems to be easier to deal not with relatively strong and big Spain, but with smaller Catalonia and weakened Spain. But this, too, the grandmother said in two: it’s absolutely not a fact that the Catalan authorities will dance to his tune ... ”Well, the European Union itself, whose role they are also told to rock the boat, brings the matter to bloodshed, there is no sense: its territory. " And yet the forces in the EU "are multidirectional," noted Trukhachev. There are also opponents of the reshaping of borders, there is also such a stratum of European bureaucracy, which believes that dealing with a strong state is worse than with two states weaker. Therefore, the expert does not exclude that “within European officials there are forces that play up to the Catalan separatists”.

The instructions on the “interference” of Russia are an attempt by Madrid “to drag the EU leadership to their side, to receive from them the mandate of approval for any actions of the authorities”. The Spanish leadership, the expert notes, knows who and what the European bureaucracy is afraid of. And now the discussion of this topic in the EU "can be used by frostbitten russophobes who want to tighten sanctions against Russia."

Finally, we add, Madrid and international experts strongly hinted at the identity of the “annexation of the Crimea” and the situation in Catalonia.

The goal of the Kremlin is to "legitimize the annexation of the Crimea" (legitimar la anexión de Crimea), wrote a newspaper in a special box. "El Pais".

The “machine” of Russian propaganda, watching the struggle of the “Catalan separatists”, saw its chance, namely the opportunity to impart “legitimacy” to the independence movement to the “advantageous Kremlin”. Speech in the article is not about Catalonia, speech about Crimea!

According to the Spanish newspaper, the Kremlin intends to “legitimize” the “annexation of the Crimea and the Donbass” (la anexión de la península de Crimea y el Donbás), which occurred during the 2014 conflict of the year. (How the Russians managed to “annex” the Donbass is not specified.)

Expert Donara Barojian from the Atlantic Council boldly stated that “the separatist media that had entrenched themselves in eastern Ukraine made an attempt to use the Catalan crisis to legitimize the illegal annexation of Crimea.” Barojian is convinced that the Catalan crisis made it possible "to re-manifest to the arguments of the Russians, as well as the leaders of [Donbass] separatists." These are the very arguments that were already used in the 2014 year in Ukraine.

Well, if it is so, dear Brussels, then shake your mustache: while the Poles, Lithuanians and Finns were waiting for the attack of Putin's military machine, the Kremlin took Catalonia without a single shot.

Observed and commented on Oleg Chuvakin
- especially for topwar.ru
Ctrl Enter
Noticed oshЫbku Highlight text and press. Ctrl + Enter
We are
Europe's Disintegration: Are National States Waiting for Disintegration?Madrid will not stop Barcelona
14 comments
Information
Dear reader, to leave comments on the publication, you must to register.