Why Belarus today is too tough for NATO?

November 14 2017
62
On the eve, President of the Republic of Belarus Alexander Lukashenko hosted the governor of the Kaliningrad region, Anton Alikhanov. The main subject of the meeting: Russian-Belarusian cooperation is mainly interregional cooperation. During the conversation, the President of Belarus made several statements that could not but draw attention to themselves.
One of these statements concerned the borders of the Russian Federation and the Republic of Belarus. According to Alexander Lukashenko, he does not divide Russia and Belarus across borders. From the statement given by the Belarusian news agency "BelTA":

We are not strangers, we have one Fatherland. We do not divide Russia and Belarus across borders, but are trying to build something in common - we called it the Union State.

Another statement by the President of Belarus was associated with the mention of threats, which, according to the Belarusian leader, are the same as in the Republic of Belarus, in the Kaliningrad region.

Lukashenko:
What is happening on the borders with Belarus is a mirror image of the border with Kaliningrad. We are face-to-face, head-on with NATO activization. And concrete facts show that we have no one to count on, we, Belarusians and Russians, need to see our interest, the interest of our peoples. You can always count on Belarus. In a difficult moment, we will always give a shoulder. 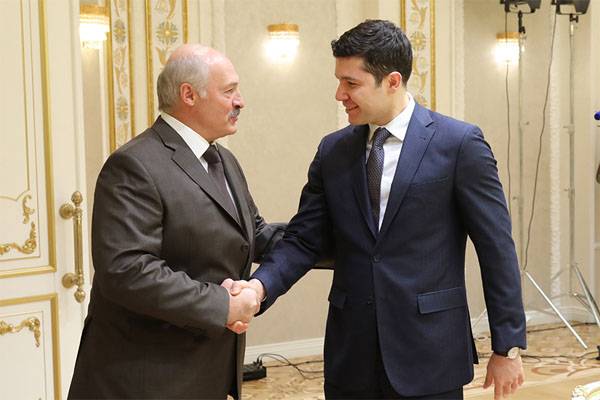 Probably, for many Kaliningradians it was a real revelation that Belarus, as it turns out, “always was responsible” for the Kaliningrad region, even during the Soviet era. Anyway. He said and said ... Here is another thing - it turned out that But father once again frightened his Baltic neighbors, for whom completely different people and public entities are now “responsible”.

As soon as the statements from the head of the Republic of Belarus during the conversation with the Kaliningrad chief regional head became public knowledge, including the western one, comments from the series appeared in the European media environment: “Lukashenko speaks about the Kaliningrad region of Russia as a neighbor. What would it mean, because Belarus and the Kaliningrad region do not have a common border? ”They immediately recalled the main horror story for the Baltic countries and Poland, the horror story called the“ Suwalki corridor ”. It should be recalled that this is a section of the Polish-Lithuanian border about a hundred kilometers long, which purely geographically separates the Kaliningrad region from the "points of contact" with Belarus. They say that between the Republic of Belarus and Kaliningrad is the “democratic” Polish-Baltic “expanse”, and Lukashenko “hints at something anti-democratic”.

The frightened story about “the readiness of Russia and Belarus to cut through the Suvalki corridor with their armies” becomes another informational occasion for the West to develop its own fake that Russian soldiers allegedly remained on the Belarusian territory after the end of the West-2017 exercises.

In general, the statements of Alexander Lukashenko’s Baltic neighbors stirred and they habitually began to wind themselves up. Well, what can you do if they practically “wake up” at any mention of the words “NATO”, “Kaliningrad” and “Belarus” in a single context. Their problems...

For us, problems are more important than our own. One of the main ones is the continuous expansion of NATO mentioned by Alexander Grigorievich. Belarus is in fact the last state of Eastern Europe neighboring Russia, in which the NATO military, including instructors and staff officers, are not present. The Baltic states are entirely NATO. In Ukraine, the US special services manage, on a so-called rotational basis, soldiers of the US and Canadian armies train Ukrainian military de facto methods of civil war and provocative actions against the Russian Federation. Poland, Norway - members of NATO. Finland de jure does not belong to the North Atlantic military bloc, but recently the “hilling out” of the Finns by the American “partners” about the need to join the military bloc “because of the threat from Russia” has become more and more intrusive.

The territory of Byelorussia among NATO staff tacticians and strategists evokes an obvious “sporting” interest precisely because this is actually the last (albeit loudly enough) Russian outpost to the west of the borders of the Russian Federation. For NATO, the Republic of Belarus is a white spot on the map of the states of Eastern Europe, for which there are too serious views, but at the head of which a person continues, despite all his “multi-vector” character, he continues to express a definite and well-known opinion about NATO expansion. Once again, this opinion was expressed by Lukashenko in a conversation with Alikhanov.

To solve the "white spot" for NATO in the frontal - by military means - no one in the headquarters of the military bloc, of course, is not going to. But try to turn Belarus into an instrument of pressure on Russia, using for this purpose, if I may say so, alternative forces and means — please.

What has NATO in recent years been preventing Minsk from undermining? Several factors at once. Firstly, the Belarusians have their own example of attempts by well-known provocateurs to carry out a color revolution, which the President and the law-enforcers, who fully protected the rule of law, stopped in time. Secondly, it is the background of the Ukrainian Maidan, intelligibly explaining to the Belarusians (as well as to us, the Russians), who eventually turns out to be at the head of the protest, which seems to begin with the quite understandable demands of the representatives of the common people. Explaining and that, whose ears grow because of any “Maidan” of modernity, and for how many years (and even decades) back “colored” shocks are able to throw away a single country. Third, the economic factor also plays its role. If one of the tasks of the NATO bureaucracy is an expansion for further raising funds for growing demands, then the business tasks are different. For the same large European business (and for Russian too), Belarus has become the most convenient market for avoiding many trade and economic sanctions and counter sanctions. And Belarus itself does not mind playing this game, considering also the fact that the game, as practice shows, is worth the candle - brings a tangible income.

And therefore, one of the main factors of why Belarus today is too tough for NATO is Alexander Lukashenko himself. He already sat out in the presidency of all Euro-Atlantic “democratizers”, without exception, including those who called him “the last dictator of Europe”. That is why the experience of building a position with respect to gray evroshvili is enormous. Lukashenko’s experience of no less experience in working effectively with the inner Belarusian, forgive me, is a crap who is trying with all his might to strike at Belarus, at the Belarusian-Russian relations from the inside.

Understands But father, that no guarantees can be taken seriously from anyone, for they will merge, as even those who have tried to prove their pro-western loyalty have already merged. And the "partners" are by no means stupid to consider the possibility of setting up the Belarusian leader against Russia with the usual methods. Therefore, on the “Belarusian front” at NATO, there is still “local movement on duty” with a simultaneous glance at whether Minsk will make a fatal mistake that can be used.

Ctrl Enter
Noticed a mistake Highlight text and press. Ctrl + Enter
We are
Situational analysis of the death of the MH17 flight (Malaysian Boeing 777), made on the basis of engineering analysis from 15.08.2014Results of the week. "God forbid to see Russian revolt, senseless and merciless!"
62 comments
Information
Dear reader, to leave comments on the publication, you must to register.