November 13 2017
86
Russia began to develop a light multi-functional aircraft carrier (LMA) with a displacement of 40 thousand tons, reports Flotprom with reference to a source in the Krylov State Research Center (KGNTs). 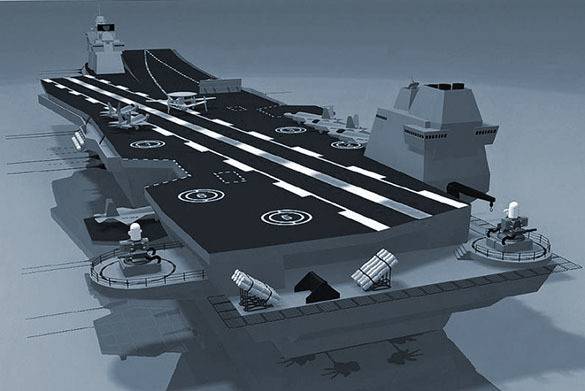 The layout of the new ship has already been developed and will be presented in December 2017. A light aircraft carrier is a kind of addition to the project developed by the heavy aircraft carrier Storm, but its production will cost several times cheaper.

“The new ship will have quite impressive technical characteristics, considering no more overall dimensions. With a displacement in 30-40 thousand tons of LMA will be able to take on board up to 50 units of various equipment. At the moment, it is planned to use Su-33 planes as part of the air group, which are the sea version of the Su-35, as well as the MiG-29K, ”the material says.

According to the developers, the use of the MiG-35 is not yet envisaged, since the manufacturer has not yet begun to develop the ship version of the aircraft.

In addition, “to increase combat effectiveness aviation the groups will use radar patrol aircraft and modern Ka-27 helicopters. ”

New aircraft carrier can be built at the Kerch plant "Zaliv". The company has the necessary experience and technical equipment for the project.