Project "ZZ". The world, intimidated by Russia. The collapse of Russia will solve all the problems of the world

November 13 2017
88
Former people of the CIA and the National Intelligence of the United States are convinced: Vladimir Putin intimidated Donald Trump. In major American publications, they write about Putin’s outstanding “trolling” aimed at the entire West. Some European experts have suggested that Russia is not a modern state, and its disintegration would contribute to the formation of truly liberal states on the ruins of an “empire”. 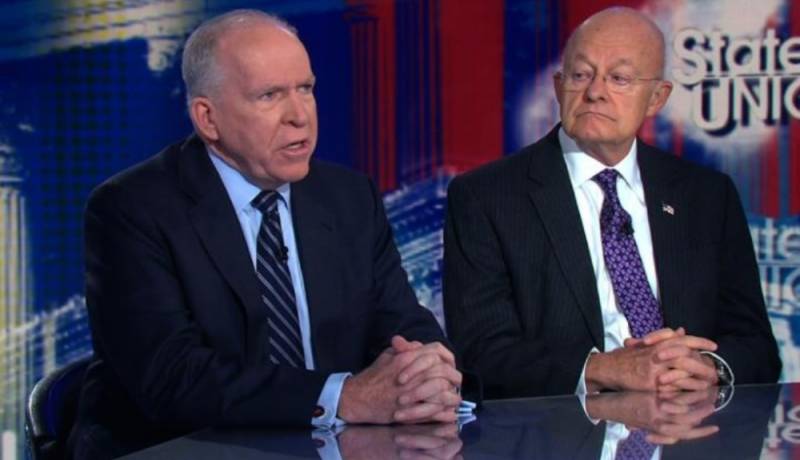 James Klapper has no doubt that President Trump is played like a puppet, "both Chinese and Russians." At least, both those and others are sure that they are doing so.

Where did such harsh statements come from? It turns out, reminds CNN, over the weekend, Mr. Trump "ambiguously" responded to the "interference" of Russia, thereby belittling former officers of the American intelligence services.

In response, two former intelligence leaders turned against the president. It happened on Sunday, when Trump was still considered a hot topic of conversation with Russian President Vladimir Putin.

Former National Intelligence director James Klapper said that Mr. Trump's understatement of the threat of Russia's interference in last year’s elections is dangerous for the US national security and allows countries like Russia and China to “play the game.” In turn, former CIA director John Brennan said that Trump gives Putin the opportunity to shirk responsibility.

Speaking in a transmission with Brennan, Mr. Klapper said: “The threat created by Russia, as John noted, is both clear and obvious. The attempt to portray it in any other way, I think, is striking, and in fact represents a danger to this country ”[for the USA].

Clapper agrees. He said that not only Russians, but also the Chinese believe that they can "beat him" [Trump].

It is quite easy to beat him: you just need to flatter. In addition, Mr. Brennan is convinced that Putin’s obvious success with Trump is due to intimidation: the current US president may be “intimidated” by Putin. “This is either naivety, or ignorance, or fear, judging from the point of view of what Mr. Trump is doing towards the Russians,” commented the situation with the “intimidated” American president D. Brennan.

Regarding Trump’s claims to US intelligence, Brennan views Trump’s attack as an attempt to undermine the credibility of the intelligence community. Clapper in this regard said that he now knows much more about the "indirect issues" concerning the potential ties between Trump's partners and the Russians.

If the former people of the CIA and the National Intelligence Service of the United States are convinced that Putin intimidated Trump, other observers tell how Putin “troll” the whole West. 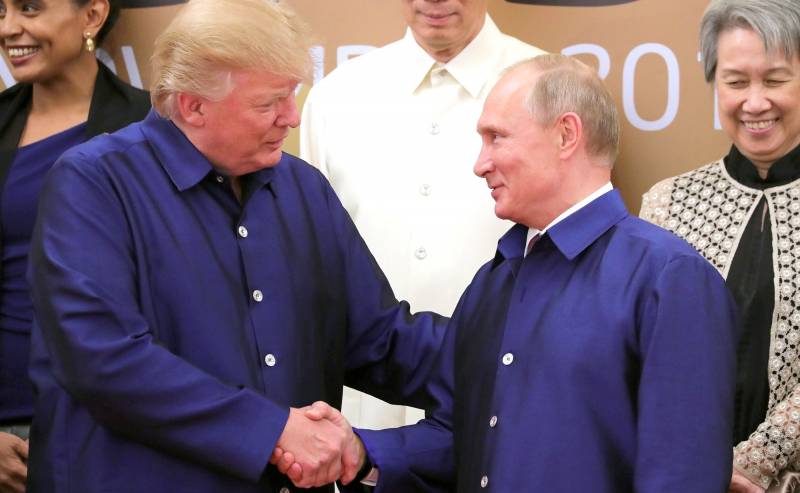 Putin’s “trolling” journalist considers “not just a tactic.” Intervention in the Western elections looks like a mistake, but in reality it is an episode of the “dark and long game of a loner”.

A few days ago, the White House insulted Russian President Vladimir Putin. On Friday, it was announced that President Donald Trump would not officially meet with him at the Asia-Pacific Economic Cooperation Forum in Vietnam, although the Kremlin has repeatedly said that such a meeting would take place. It is clear that the dialogue between the United States and Russia has broken even more. Maybe Putin made some kind of strategic mistake? Smart people say yes, the browser indicates.

Leonid Bershidsky quotes the words of one such intelligent person. It is the former President of Estonia, Toomas Hendrik Ilves. “Tactically, this is a great job,” he said. - However, strategically, what they have done is a failure. They [Russians] managed to push away many of the largest states of the West, and these are the same countries in which they launder their money. ”

Marc Galeotti, “one of the most astute Western scholars” who write about modern Russia, brought out the same thought. If Putin himself was previously mistaken that his “campaign of hacks, disinformation, secret political donations and other gambits” would allow him to form a political agenda in the West, now he should think hard. "Putin’s horrible passion for subversion seems to be a poisonous product stories KGB, ”the expert believes. Its premises originate in the “nationalist anger” that was formed due to the “decline of the superpower” and the inability to promote the “Russian agenda” in the world in any other way. Therefore, Putin is pushing "his spies, trolls, diplomats and lobbyists" to the strategy of "divide and conquer." Putin’s team uses every opportunity to "divide, divert attention and destroy the West." But such a tactic, the scientist notes, leads to the transformation of Russia into an outcast.

Western experts on Russia “have been arguing for many years about Putin’s fort: strategy or tactics,” says a columnist. If you believe that a campaign is underway to create chaos and promote populist candidates for power in other countries, then Putin is a tactician.

However, Bershidsky himself is not so sure. In his opinion, the Russian leader tried to play two different long games.

During his first term as president, he tried to follow the rules of Pax Americana, striving for economic efficiency, forcing his government to increase production and to strive for the best places in international ratings. He even spoke about the possibility of Russia's membership in the North Atlantic Treaty Organization.

In the second term, Putin tried to put Russia “on an equal footing” in negotiations with the United States and the European powers. In those years, Russia received an unexpected bonus in the form of a rapid increase in world oil prices. This period ended with Putin’s speech in 2007 at the Munich Security Policy Conference, in which he accused the United States of excessive use of force in international relations. However, Putin "was still in partnership with the West": Russia participated in the G8 and waged a joint war against terrorism with the West.

Putin did not act erratically and unpredictably during most of his rule, the author believes. He is probably a far greater strategist than any Western leader of this era. He didn’t even have to worry about winning the election. And he was hardly "suddenly turned into an opportunistic tactic during his third term."

"It's just that his current game is a dark journey into the unknown, and it seems that from time to time he scares his subordinates - and, perhaps, scares Putin himself."

All that he has done “since the invasion of Crimea in 2014,” the observer considers “a chain of reactionary, opportunistic, ultimately erroneous steps”. He "captured the Crimea because he could capture"; he “provoked a separatism war in the east of Ukraine, because it was easy”; he “went to Syria because there was a vacuum”; he “conducted campaigns of propaganda and" active measures "in the UK, the USA and other western states, because they were not ready for this." Yes, Putin "influenced people and the results, but did not make friends - in fact, he seemed to create enemies at every turn."

Such, alas, is the third Putin’s supposed long play, concludes Bershidsky. Putin "does not believe that there is an opportunity for cooperation with the West." Putin’s demonstration is intended only "for the rest of the developing world." It is assumed that he "called on Asian, Middle Eastern, and Latin American countries to challenge the hegemony of the United States and to view the West as a colossus on clay feet." He has got fans in some places: for example, in the Philippines this is President Rodrigo Duterte. Putin’s demonstration of the “weaknesses of the West” may even work for China, who seems to have refused to continue liberalization.

The path of the “global troll, the world joker, the eternal pretender is the path of a loner,” the observer bitterly ironizes. The evolution of Putin’s views is “irreversible,” the journalist is convinced. Putin clearly finds that he is higher than Western opponents believe.

The best Western response to “Putin’s game” is proof that “democratic institutions are still working, that they still reflect what people want from the government.” And the West "can be an example and a moral compass for the developing world and ultimately for the Russians."

But in this field, both the United States and Great Britain are still defeated, Bershidsky is sure. Continental Europe "works better," although its flaws are obvious to the world. Putin’s strategy is to file the failures of the West "as an existential crisis." And in this Putin "does not necessarily lose."

How to be the West? One hope - the collapse of Russia!

Some experts suggest that Russia is not a modern state, and its disintegration would contribute to the formation of such states on the ruins of an “empire”.

“Russia's economic strength, as well as the political and military might associated with it, depend on the export of minerals. The country cannot offer anything more, - Vit Kucik writes in the Česká Pozice publication (the source is translated from Czech - "InoSMI"). “Therefore, the pipeline network plays a crucial role for Russia, and control over them guarantees Moscow the preservation of the integrity of the empire. If Moscow stops controlling them, then it will immediately lose power, and then the Russian Federation will fall into three types of regions. ”

These are the three types distinguished by the expert: 1) regions with mineral reserves that would get rich in mining and export, while the energy resources "would be sold based on criteria different from the current Kremlin principles"; 2) regions with a strategic position, competing for transit fees from the supply of minerals; 3) regions that would have to "buy minerals at market prices." This group includes, for example, Moscow.

In which case could Russia establish a long and honest cooperation with Europe, without being a potential threat to it? Here is the answer of Vita Kuchik: “Only then [I could have adjusted] when Moscow no longer needs centralism, which keeps the empire from falling apart. It is cruel, but logical. Russia will cease to be a threat only when it falls into smaller formations. The collapse of imperial centralism will allow successor countries to build a more efficient economy and depend less on mining, thereby stimulating economic growth. ”

Here and the tale is over, and who listened, that fellow.

Consequently, the West has the only way to get rid of the Russian "intimidation": to split an outdated "empire" into many "regions" that will compete with each other. The first in the competitive race for survival will be the raw materials territories and regions, the second - the transit ones, since the resources will go all the same to the West, the third and closing ones - those who have no minerals. Here, other analysts, as they say, sum up the base for Moscow, where power is now concentrated: Moscow simply does not have rich resources, as a result it will weaken. True, this territory will have a chance to “build a more efficient economy,” to a lesser extent dependent “on mining”. The Moscow region, apparently, will turn into some kind of special “country”, from where former Muscovites will run to other regions, richer. However, maybe they will not run, but they really build a “more efficient economy”. It will be built outside of oil, gas and other raw materials and beyond the question of increasing military power, since the latter hardly makes sense in a single conventional Muscovy.

Such a picture of the future, apparently, means the long-standing historical desire of a certain "friendship" between Europe and the USA with the Russians. The present Russia seems to the West to be very big!