Contradictory interaction: where did Russia and the United States come after almost seven years of the war in Syria 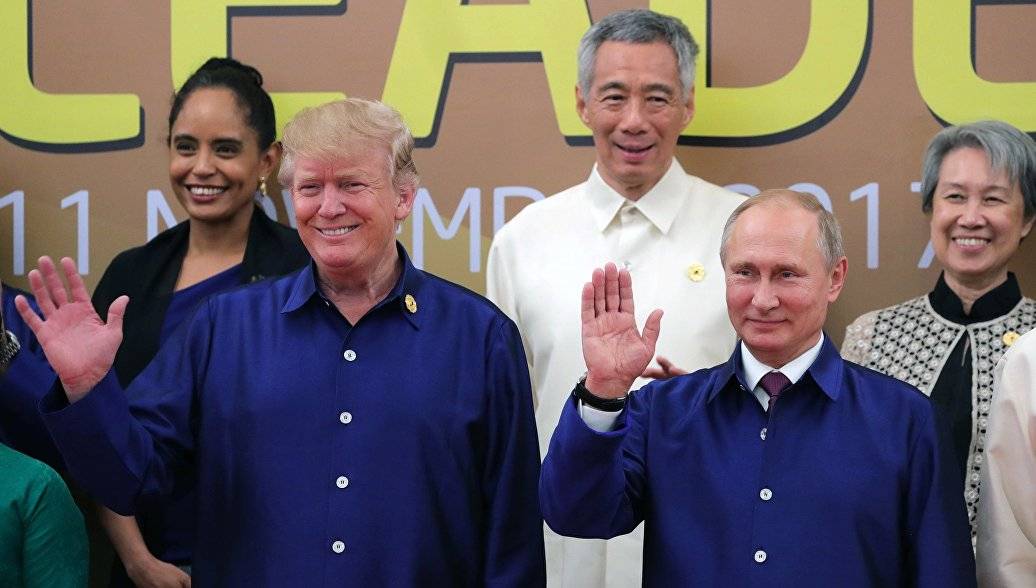 The other day, Russian President Vladimir Putin, speaking at the final press conference in Vietnam, said that "the military work to eliminate the terrorist center in Syria" is nearing completion. This means that the IS terrorist organization in the Syrian cities is over. But what we have in the bottom line, looking back almost at seven years of fierce fighting with terrorists? Half a million dead among both Alawites and Sunnis. Several million refugees, large-scale destruction of settlements, the restoration of which will take more than 80 billions of dollars and how much time is unknown. Many UNESCO World Heritage sites are lost forever. This is the result of "investments" of Western countries and Sunni monarchies. Such is the price for the “freedom and change” that had to be paid to prevent the next “project of the West”.

The operation to destroy the Islamic State terrorist organization banned in Russia is at the final stage. In many ways, this was facilitated by the recent successful actions of government troops, their allies in the east and southeast of Syria. The liberated Meyadin, Deir ez-Zor, Abu Kemal deprived the radical Islamists of power in the last Syrian settlements and finally buried the hopes of Abu Bakr al-Baghdadi to build a self-proclaimed caliphate.

However, despite all the courage and courage shown in the battles by the Syrian military, it is hardly appropriate today to speak of a complete cessation of hostilities. In Syria, there are still groups of illegal armed groups. However, the fight against the remnants of bandit formations is a matter of time, and the fact that there are no settlements left in the Arab Republic, where Igilovites dominate, is obvious.

At the same time, on the sidelines of the APEC summit in Vietnam a fleeting dialogue took place between the heads of Russia and the United States. The conversation of Vladimir Putin and Donald Trump, which, though passed, is on its feet, has already been recognized by leading news agencies as very important. It is assumed that the short-term meeting of the two leaders demonstrates the readiness for the interaction of the two powers in the fight against international terrorism and gives hope for joint efforts in a political settlement of the Syrian crisis.

Approving the joint statement in Vietnam, the Russian and American leaders came to the conclusion that the conflict in Syria has no military resolution. “The final political settlement of the conflict must be found in the framework of the Geneva process in accordance with the UN Security Council resolution 2254,” the joint document says.

At the same time, the question remains as to how conscientiously the American side approaches the implementation of the agreements reached at the Asia-Pacific Economic Forum in Vietnam. Indeed, in many respects precisely the efforts made by the Western allies laid the foundation for the aggravation of the internal political crisis and its transformation into a full-fledged armed conflict.

The whole scale of the Syrian tragedy has yet to be assessed, but even now, looking back almost seven years ago, it becomes clear that the struggle against the "bad" and "good" terrorists for the USA was given to the Syrians very hard.

According to statistics provided by leading news agencies today, during the years of armed conflict in Syria, 470 thousands of people died, 117 thousands - are considered missing. The population of Syria has decreased by 15 percent and, unfortunately, continues to decrease.

The report of the Syrian Center for Political Studies, published at the beginning of last year, speaks of nearly two million people injured, about 14 millions of unfortunates, deprived of their sources of income. During the fighting, almost half of the Syrians (45%) were refugees who were forced to leave their homes because of the threat to the lives of their loved ones. The figure in 470 thousands of dead in the conflict, the Syrian center cited a year ago.

According to Russian media, Syria has lost a huge number of state and general education institutions: three thousand schools, about 400 hospitals. The number of qualified doctors decreased by 7 thousands of people, and the spread of serious diseases such as cholera, children's paralysis, on the contrary, increased.

Was this what the opponents of the current regime wanted when in March 2011 of the year they went to anti-government rallies demanding cardinal reforms throughout the country and the resignation of Bashar al-Assad? Hopefully not.

As for the external "well-wishers," everything is obvious. The support of the anti-government opposition on the one hand by the governments of Turkey, Israel, Sunni monarchies, and on the other - by Western countries, such as the USA, France, and the United Kingdom, undoubtedly played a decisive role. The desire of the latter at all costs to get rid of the unwanted Assad led to a full-scale armed conflict, the funding of the armed opposition on a permanent basis, and further training of the militants, allegedly to fight terrorists, but in fact with government forces.

As a result, the number of illegal armed groups did not decrease even with the presence of military contingents of foreign countries on the territory of Syria and during the actions of the international coalition led by the Americans. Their number was several dozen, but the contradictions between the militants did not weaken the onslaught against Damascus. In addition, pressure from the West has increased, and the fight against terrorism of the international coalition overnight turned into open confrontation with legitimate authority.

While foreign tabloids accused Damascus of the presence and use of chemical weapons, government troops controlled no more than a fifth of the entire territory of Syria, most of the population, exhausted during the terrible war, lost their homes and their loved ones.

The meaning of the armed conflict in Syria was that it was a tangle of very different interests, ranging from rival IAF groups to foreign allies, among which there were often misunderstandings, to put it mildly. To agree in these conditions is extremely difficult.

And yet, attempts to overcome disagreement are repeated again and again.

Who knows, perhaps the Russian-American statement on paper will initiate practical actions and help “consolidate the cease-fire regime and create conditions for the start of a political process” in practice.

Ctrl Enter
Noticed oshЫbku Highlight text and press. Ctrl + Enter
We are
Interview of V. Putin to Channel One and the Associated Press AgencyWhat you didn't want to know about England
Military Reviewin Yandex News
Military Reviewin Google News
16 comments
Information
Dear reader, to leave comments on the publication, you must to register.