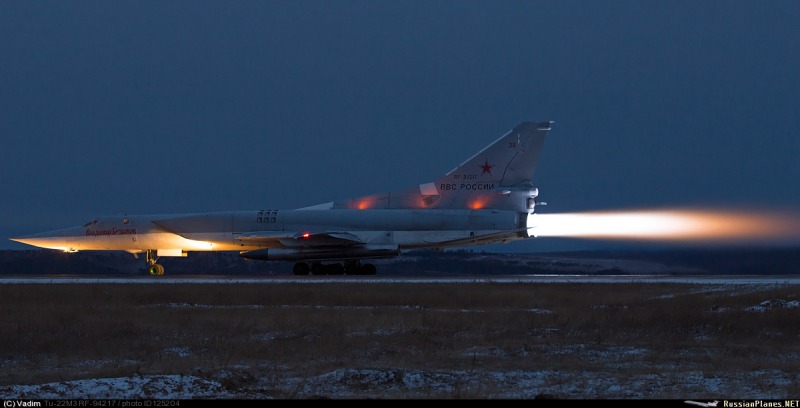 X-22 causes fatal injuries even without the use of a nuclear charge. With the approach speed in 800, m / s, the breach area was 22 sq. m, and the internal compartments of the ships were burned with a cumulative jet to a depth of 12 m.

The cumulative charge leaves deep, but small in size gaps, while the diameter of the holes left does not depend on the mass of the charge. It is determined by the caliber. In order to leave the “hole” area 22 square. m, you need a cumulative warhead with a cross section of tens of meters. And to launch such a rocket would have to Baikonur.

The second remark - the cumulative jet does not burn anything. The temperature there does not matter. The CC literally “washes out” the hole, like a jet of fluid under high pressure. And after overcoming the obstacle, the explosion products turn into fine powder with a temperature several times smaller than the melting point of steel.

The internal compartments of the ships were “burned” not by a cumulative jet, but by a directional high-explosive explosion. Regarding the size of the hole - nothing surprising for a warhead containing 630 kg of explosives.

Of course, all these “burning out” are minor inaccuracies found in articles on military equipment. Essentially it does not change.

The warhead of the X-22 missile can drown any ship. But can at least someone launch such a rocket?

Below are the data from the article “Backfire rockets” from a famous historian aviation, writer Viktor Markovsky. Chronicle of the combat service X-22 with a detailed description of the episodes of its maintenance and practical application in parts of long-range missile aircraft. Figures and facts.

Based on this information, it becomes obvious that no X-22 cruise missile existed as a weapon. Its components separately lay in warehouses, and dummies periodically lifted into the air. But the ability to proceed with combat missions in accordance with their mission in a given time frame was out of the question.

Task. Deliver a one tonne warhead to a range of 500 km at a speed close to four sound speeds. The use of tube-jet or direct-flow engines is excluded, they are not “drawn out” in energy. Only a two-component LRE with a flow rate of up to 80 kg of fuel and oxidizer per second. And high-impact - 250 kgf thrust on 1 kg dead weight of the engine.

To ensure these characteristics, four tons of dimethylhydrazine (TG-2) and concentrated nitric acid (AK-27I) were pumped into the tanks of the rocket. If, during the refueling process, a leak occurred, the spilled acid had to be neutralized with no less caustic alkali. Leaks were commonplace, because concentrated nitric acid had an important property - high aggressiveness, leading to rapid corrosive destruction of metals.

As for asymmetrical demethylhydrazine, it is also the poison that can trap all tens of meters due to its considerable toxicity and volatility.

Unfortunately, the designers did not guess to cover the inside of the tanks of each rocket with a layer of gold. Therefore, the storage of X-22 missiles in the filled state turned out to be impossible.

In theory, the combat readiness of aviation regiments that had X-22 missiles on board was achieved by means of a continuous cycle of operations. Several rockets were put into a refueled (combat) state, then, after a certain time, the fuel and oxidizer merged from them, the warhead was removed, the tanks were washed with a neutralizing solution, dried and the missiles surrendered to the storage, while the new rocket was undergoing refueling and took up combat duty.

You do not need to be a rocket engineer (in a gas mask and rubber boot covers, thick with a finger) or the commander of an aviation regiment to understand the absurdity of such a “carousel”.

In practice, everything looked simpler - the Tu-22M missile carriers always and everywhere flew with unfilled missiles. The full cycle of refueling was worked out only when performing valid start-ups, which were carried out at best 1-2 times a year. In describing such episodes, Markovsky uses the word “extraordinary”.

Then came into force the laws of survival in the military environment.

The number of stars on the epaulets depended on the shooting results. Therefore, only the most trained crews who already had similar experience were allowed to take-off starts. While most of the pilots had no experience with the X-22 at all.

Preparation for the test run took at least a month, with several rehearsals. They always went to start-up as a pair in which the backup crew insured the lead in case of failure.

As a result, martial fiction about the three aviation regiments required for the destruction of one AUG, gave way to harsh reality - a pair of missiles that had to be fueled and prepared for launch for a whole month.

In this case, even a tucked rocket had a chance to stay on the ground. The process of introducing the 6-ton “blanks” under the bottom and wing of the aircraft and then the suspension in a semi-submerged state in the load compartment on the DB-45F holder required certain efforts and skills. Due to the rarity of such events, the technical staff also did not have extensive experience in handling these weapons. 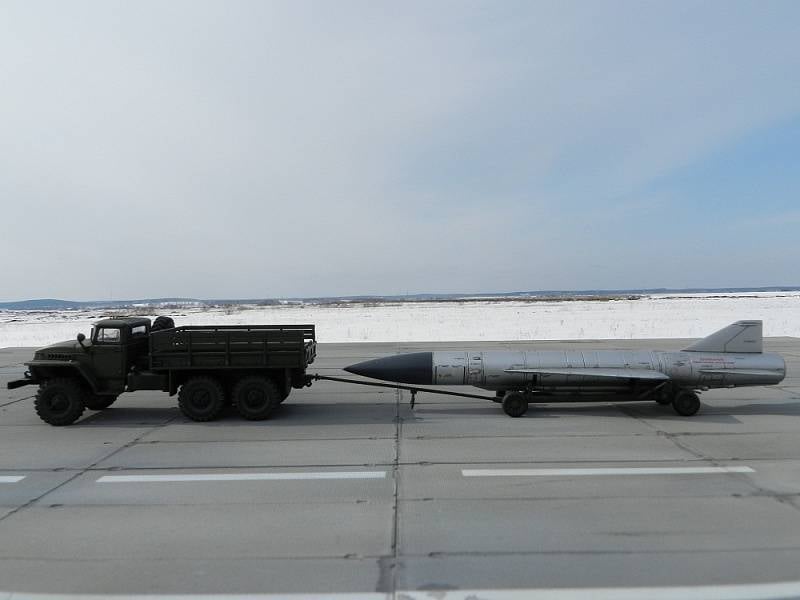 Therefore, the take-off of three regiments of rocket-carrying aircraft for an attack by an aircraft carrier group could take a little time.

Markovsky rightly notes that the American “response” to the threat from the Soviet missile carriers had similar drawbacks. 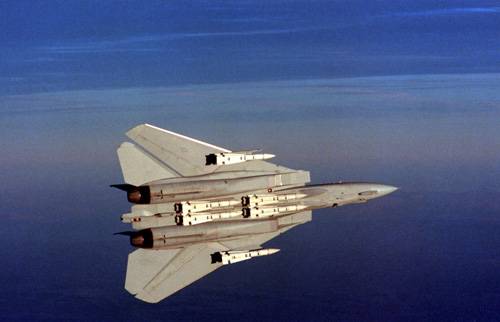 15-inch projectile with a starting weight of half a ton and a launch range of 180 km. With marching speed 5M, 60 kg warhead and unique for its time control system "Hughes" AN / AWG-9, installed on board the fighter. Able to simultaneously accompany up to 24 targets.

Now, after decades, it turned out that the F-14 could have flown out on full-armed patrols (six Phoenix missiles), but could no longer land on deck. Therefore, the experience of piloting "Tomcat" in this configuration, none of the pilots did not have.

Do we need to clarify the cost of these missiles in comparison with other conventional EIA (Sparrow, Sidewinder)? It turned out to be such that most US Navy pilots fired them only on paper and simulators.

Returning to the domestic "vundervaffe." In addition to low operational suitability, the X-22 cruise missile had a number of other “positive” qualities.

The size and weight of the missiles limited their number on the carrier, and the external suspension worsened the flight characteristics and increased the visibility of the missile carrier. If with one KR Tu-22М2 had a range of 2200 km, then the suspension variant of two or three rockets was already overload, and the range had thus decreased to 1500 km.

According to some reports, under the wing holder Tu-22М3 is the X-32 rocket (an upgraded version of the X-22)

Such a goal - the perfect gift for enemy air defenses. Single, large, flying at an altitude of 20 + km, with an ESR sufficient to detect the missile at the time of its separation from the carrier.

As for the high marching speed (3,5 — 4,6М) and height (22,5 — 25 km), it is vulnerable to the ship's air defense weapons of the “likely enemy” at all stages of its flight. Modifications of the ship's standard-2 missiles had a max. 100 nautical miles launch (180) and interception height over 80 thousand feet (24 + km). At the same time, anti-aircraft calculations had much more experience in shooting and actual use of weapons than among missile carrier pilots.

Modern "standards" have even higher performance. For example, the SM-6 with an active GOS hits air targets at 240 km and reaches 33-34 km. For higher-altitude targets, there is an extra-atmospheric interceptor SM-3.

Weapons should not be frightened by their complexity and cost. During the naval exercises RIMPAC-2010, the Americans “drove” into the target ship (formerly the helicopter carrier “New Orleans”) at least 10 of the harpoon anti-ship missiles. 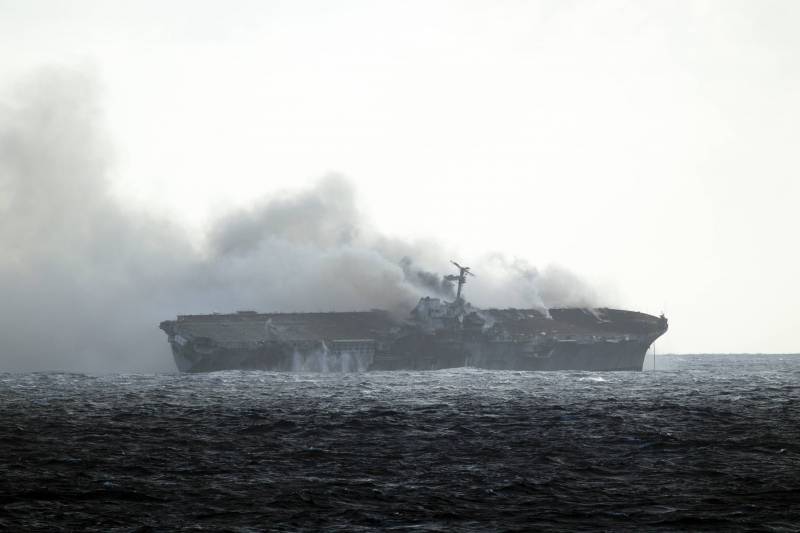 Similar exercises are held regularly fleets different states. In another photo - the sinking frigate “Sarhad” of the Pakistani Navy, hit by the harpoon anti-ship missile launched by the frigate “Alamgir”. 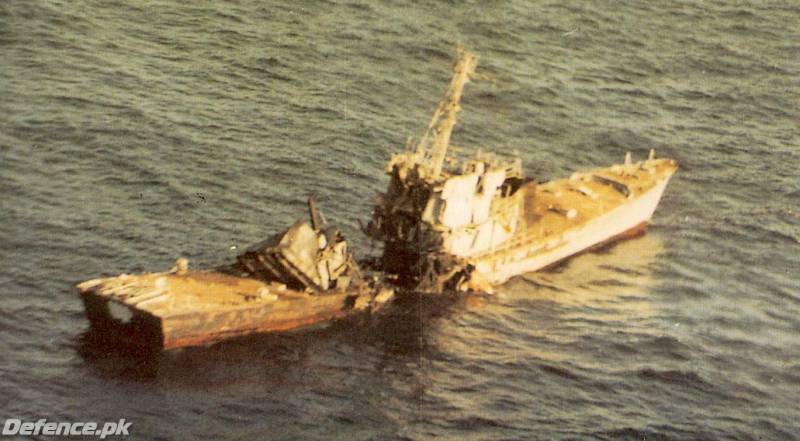 Below is a decommissioned destroyer shot by three anti-ship missiles during the RIMPAC-2000 exercise. 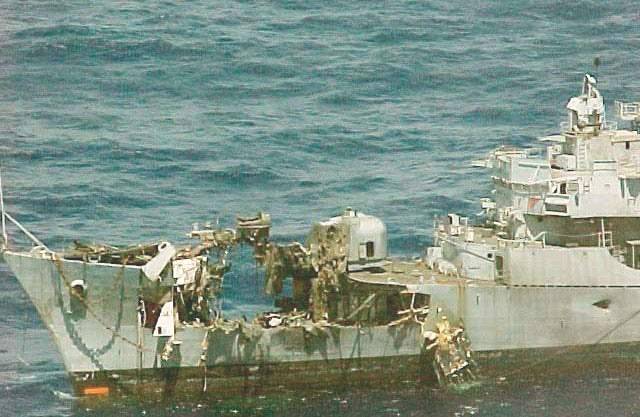 Mass subsonic anti-ship missiles are the most realistic and in fact the only anti-ship missile of our time. These missiles are placed on thousands of carriers: ships, aircraft, submarines. And military units have experience with this weapon. Sufficient experience, which allows us to hope that in a combat situation the rocket forces will be able to launch a rocket at the right time, not forgetting to turn off all the fuses and designate the correct flight task.

Finally, group low-flying targets with low ESR and visibility (due to the limited size of the missiles) pose a greater threat than single targets at high altitudes.

As for monster rockets, decades of development and testing usually end in an unclear and at the same time logical result. Where is the aviation variant of the P-800 “Onyx” three-sweep missile, which has been talked about for the third decade? The only photo is a model of a rocket under the fuselage of the Su-30MKI made in 1990's.

The Indians have 10 years promise to adopt the aircraft "Bramos-A". Need I say that it does not exist? Frankly, among the Indians, even the ship version has not yet reached operational readiness.

The Yankees, having taken on the development of a promising RCC, immediately “abandoned” the project of a supersonic LRASM-B, switching to a simpler draft of a subsonic rocket with a much lower cost and less operational problems.

Another monster rocket RATTLERS has not gone beyond the layout on the scale of 1: 2.

It is worth noting that the systems listed are childish babble against the background of the cyclopean X-22. Truly, one can be surprised at the technological and industrial power of the USSR, which was capable of embodying 11-meter monsters “in metal”. Even without achieving real combat readiness in combat aviation regiments.

History with the X-22 rocket is closely intertwined with the new sensation - promising hypersonic anti-ship missile “Zircon”. Delivery of the warhead (300-400 kg) to the range 400 km at speeds up to 6M. All this - with the use of ramjet engine and in dimensions, allowing to place the rocket in the standard cells of the UBC “Caliber”. Those. with a length of less than 10 m and the launch mass of the rocket is only about 3 tons.

Unlike the X-22, which was launched from the Tu-22M flying in the stratosphere, the fantastic “Zircon” has yet to independently climb and accelerate to a speed at which it can turn on the main propulsion ramjet (obviously, due to the starting solid-fuel accelerator, which should weigh as polrakety). Plus a mandatory layer of thermal protection.

The use of ramjet instead of a liquid jet engine should have a positive impact on the operational suitability of the Zircon. On the other hand, the analysis of the performance characteristics of other rocket systems of a similar purpose (having a large mass and dimensions at a much lower flight speed) suggests that the creation of the Zircon anti-ship missiles with voiced characteristics is impossible.

This is the conclusion from the point of view of existing rocket technologies. But who said that Russian science can not make a breakthrough?