November 15 2017
6
In addition to the construction of the "Decembrists", "Lenintsev" and "Baby" the plant named after Andre Marty before the war was engaged in the construction of cruiser submarines of the type "C". A certain successful experience of building Soviet submarines of the first series of the “D” and “L” types allowed to proceed to the development of larger and more complex ships. However, at that time there was a technical lag from the leading shipbuilding powers of the West - it was necessary to overcome this lag caused by the devastation and the Civil War. 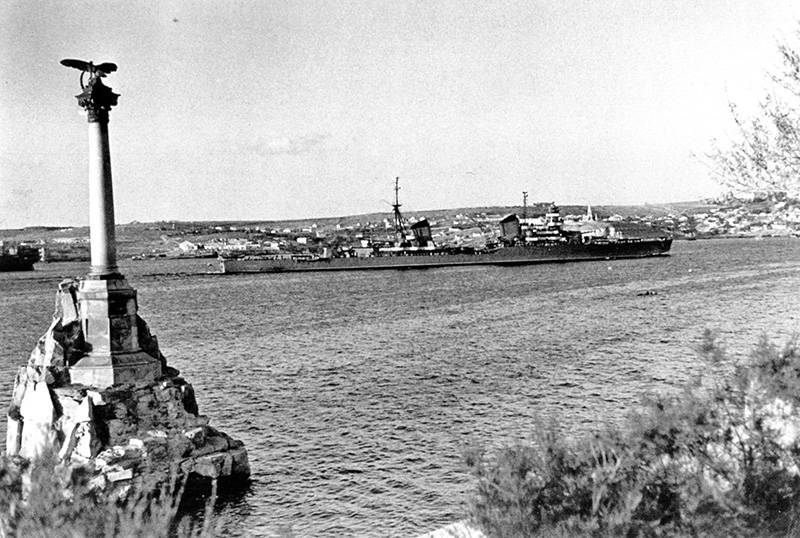 The cruiser "Molotov" enters the raid of liberated Sevastopol

All the “traditional allies” of Russia still on the Entente, such as England and France, did not consider possible cooperation with Soviet Russia. I had to look for other ways to gain knowledge and technology. The most suitable country in this respect was at the end of the 20-x - the beginning of the 30-x. Weimar Germany. In the Western world, it was in fact a rogue state, which made it solely guilty of unleashing World War I. The economic development of Germany was greatly undermined by the Versailles Peace Treaty, which imposed bans and restrictions on entire industries and sciences and provided for the payment of huge reparations.

Diplomatic relations between the USSR and Germany were established in 1922, their result was the conclusion of the Treaty of Rapall. At the beginning of 1930, a group of Soviet technical specialists was sent to Germany to establish cooperation with German firms in the design and construction of submarines. However, the Germans, still constrained by the harsh restrictions of the Versailles system, were forced to refuse the Soviet delegation - Germany had no right to either design or even build its own submarines. The German side showed no interest in the creation of a submarine design center in the USSR.

The situation was saved by establishing contact with the IvS design bureau, who worked in the Netherlands and is part of the German concern Deshimag (DeSchiMAG). Despite the Dutch “registration”, the bureau staff consisted mainly of Germans who had extensive experience in designing submarines for the Kaiser fleet back in the years of the First World War. In November 1930, IvS received from the Soviet side the terms of reference for the design of a submarine with a displacement of 700 tons. In 1932, all the documentation was ready and handed over to the customer.

In addition, the company representatives offered to inspect the E-1 submarine under construction for the Spanish fleet, which was so liked by the specialists from the USSR that it was decided to take it as the basis of the project. In April, 1933 between the Soviet side and the Deshimag concern signed an agreement to create a project for a submarine of the E-2 project. In Soviet documents, these submarines were called as "H" - German, and then as "C" - medium. The first boats of the IX series were laid in Leningrad at the end of 1934.

The next series, in which numerous technical improvements were made, was called IX-bis. Boats were built for all fleets, including the Black Sea. The C-31, C-32, C-33 and C-34 submarines were laid out at the André Marty plant in October-November 1937. They became part of the Black Sea Fleet at the end of 1940 - the beginning of 1941. 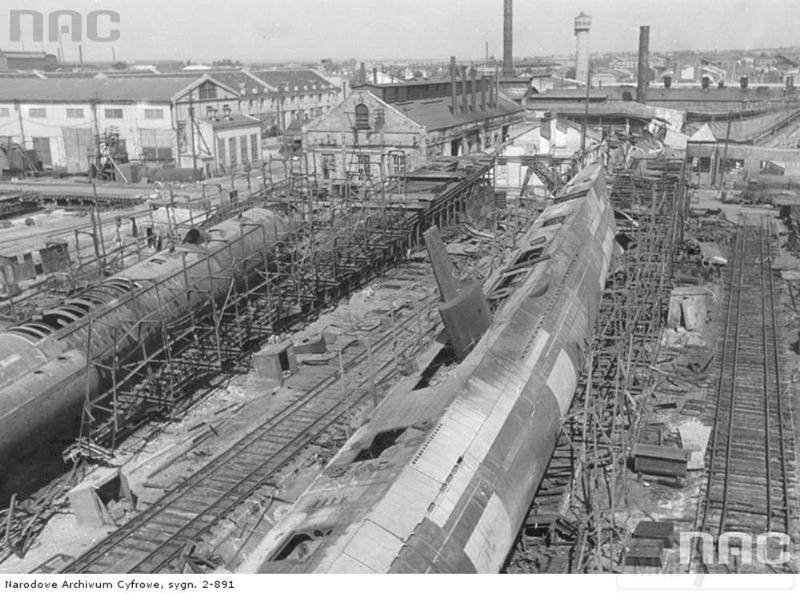 In parallel with the construction of submarines of the “L”, “M” and “C” series, at the plant named after Andre Marty (in the documentation it was listed as Plant No. XXUMX), the surface ships were also commissioned. In addition to the leaders of the "Leningrad" type, work was carried out on the construction of destroyers of the 198 project. By the beginning of the 7's. The Soviet fleet included 1930 squadron destroyers of the Novik type (of which 17 was on the Black Sea) and its improved versions, which was frankly inadequate.

In 1931, it was decided to design and build modern ships of this class. In 1932, a delegation of Soviet specialists was sent to Italy to study the experience, which managed to establish contact with the Ansaldo concern, which, among other things, was engaged in the construction of light cruisers and destroyers. After reviewing the drawings of the Italian Mistral-type destroyers that were then built, the Soviet delegation chose it as the main prototype of promising ships for the Soviet Navy — they received the designation “7 Project”. In December, 1934 was approved. 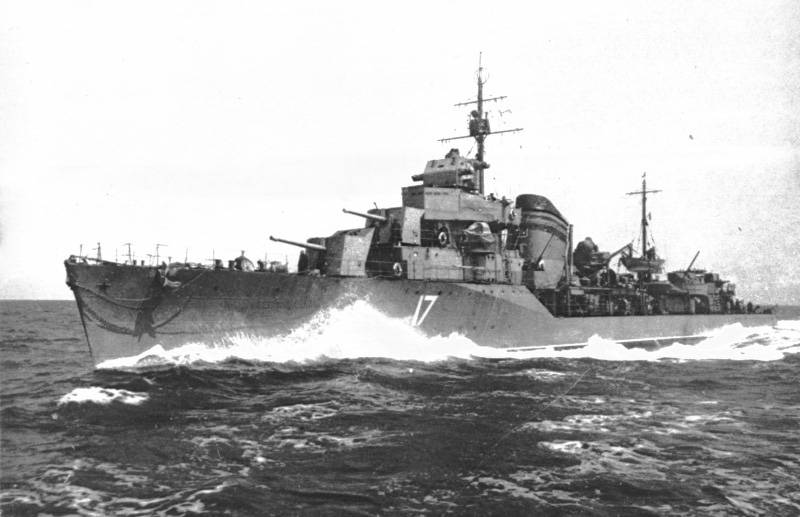 The destroyer "Merciless" in a combat campaign

Large ships for a large fleet

In 1930's light cruisers of the 26 and 26-bis projects began to be part of the Soviet fleet. In 1932, the terms of reference for the development of a new light cruiser project were signed - the three pre-revolutionary Svetlan and the more gray-haired Comintern (Memory of Mercury) were available. In 1934, all the documentation for new ships called the 26 project was approved.

As in the case of the destroyers of the project 7, it was not without strong Italian influence, in particular the cruisers of the “Duke d'Aosta” type. Unlike the “Italians,” Soviet ships carried more powerful weapons from nine 180-mm guns in three three-gun turrets. The standard displacement of the 26 cruisers was 7700 tons.

In October, the Kirov was laid down in Leningrad on 1935, and the Voroshilov plant was established at the Andre Martí plant. In 1940, the latter joined the Black Sea Fleet. Given the experience of designing ships of the 26 project, a number of changes and improvements have been made to it - this is how the 26-bis project appeared. In 1937 in Nikolaev at the same plant, the light cruiser "Molotov" was laid on this project, which was handed over to the fleet in June 1941. Both Black Sea cruisers took an active part in the Great Patriotic War. In August, the Molotov 1942 was damaged (a torpedo had a part of the stern torn off), and an unfinished 68 cruiser, the Frunze, acted as a donor to repair it. 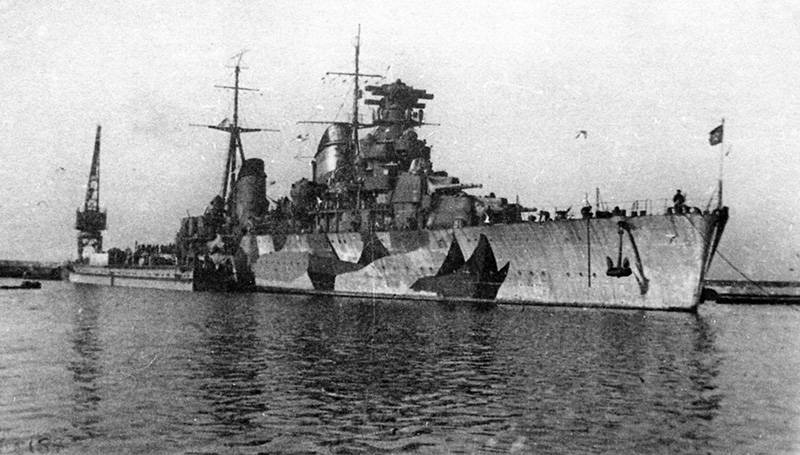 The cruiser "Molotov" in the floating dock during the stern recovery, 1942

In addition to warships before the war, the company carried out tasks for civil shipbuilding. In 1935, according to the 51 project, the construction of two icebreakers of the type “Joseph Stalin” - “Lazar Kaganovich” and “Anastas Mikoyan” was started. Construction of the first was successfully completed by 1938, and Kaganovich went to the Far East. Mikoyan was in construction longer and left Nikolaev in the summer of 1941, without acceptance tests.

In November of the same year, an icebreaker was sent on a special expedition to the North by a special order to assist in guiding caravans. "Anastas Mikoyan", having no weapons on board, independently passed through the Bosphorus Strait. In the Aegean Sea, a lone icebreaker was attacked by Italian torpedo boats, and later by torpedo bombers, but escaped with minor damage. Help from the valiant allies was expressed in the small-caliber gun of the time of the Tsushima battle, generously allocated during the stay in Suez. Despite all the obstacles, the icebreaker “Anastas Mikoyan” safely made the transition to the Gulf of Anadyr by August 1942. 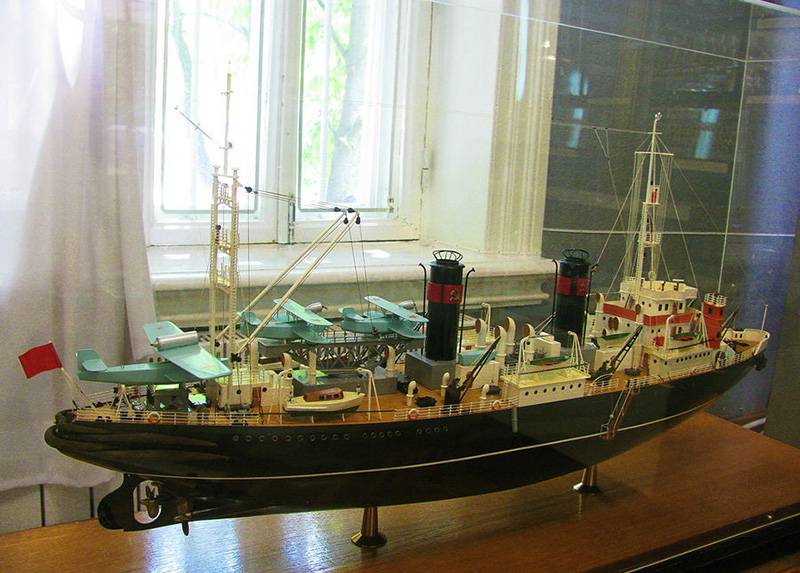 By 1938, the André Marti plant, in parallel with the construction of military and civilian ships, was intensively modernized and reconstructed. New workshop complexes were created, the erection of the topside part No. XXUMX was completed. All this complex of works was carried out before the construction of the ships unprecedented for the plant in terms of the displacement size - this is a battleship of the 0 project, called “Soviet Ukraine”.

With a total displacement of 65 thousand tons and the length of the 269,4 corps meter, the battleships had to be armed with nine 406-mm guns and numerous auxiliary and anti-aircraft artillery. The construction of new battleships, which were to become one of the strongest in the world, was part of the construction plan for the Big Fleet, after which the USSR would be one of the leading maritime powers. 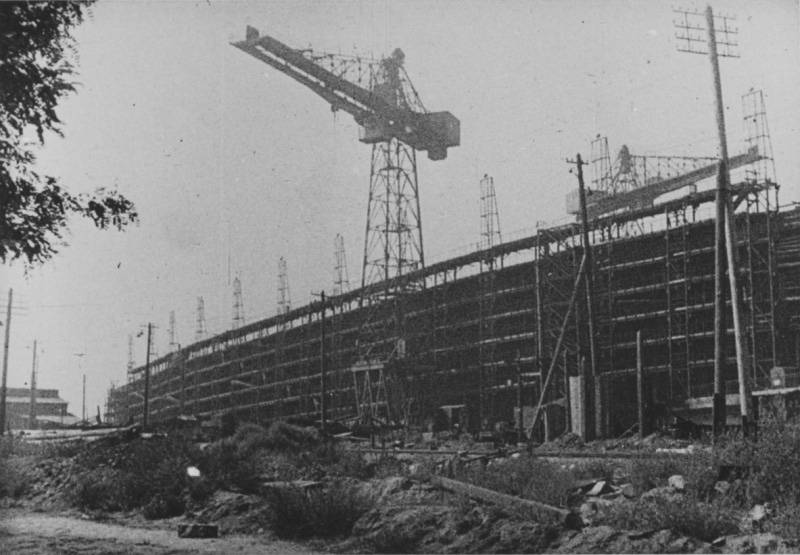 The case of the battleship "Soviet Ukraine" on the stocks of the plant, autumn 1941,

The head battleship "Soviet Union" was laid in Leningrad in the summer of 1938. In October, 1938, at the plant named after Andre Marty, laid the second ship of the series - the “Soviet Ukraine”. The construction of two more battleships unfolded in Molotovsk. The construction of such a large and complex ship was carried out slowly - due to lack of experience, a delay in the supply of materials and equipment. The outbreak of war caught “Soviet Ukraine” in 7% readiness. During the occupation, the Germans tightly managed the factory, taking more than 4 thousand tons of steel to Germany. Before the Germans left Nikolayev, the body of the battleship was blown up and dismantled after the war. By the way, the compartment of the “Soviet Union” type battleship built for field tests was converted into a floating anti-aircraft battery under the unofficial name “Do not touch me” in Sevastopol during the war years.

Author:
Denis Brig
Articles from this series:
CSY: destroyers leaders and submarines
CSY: recovery after the Civil War
CSY: the first years of Soviet power
CSY: development and decline at the beginning of the 20th century
CSY: foundation and first ships

Ctrl Enter
Noticed oshЫbku Highlight text and press. Ctrl + Enter
We are
Black Sea Shipyard: destroyers leaders and submarines"Svetlana". History of creation
6 comments
Information
Dear reader, to leave comments on the publication, you must to register.