Galicia will be Polish or deserted 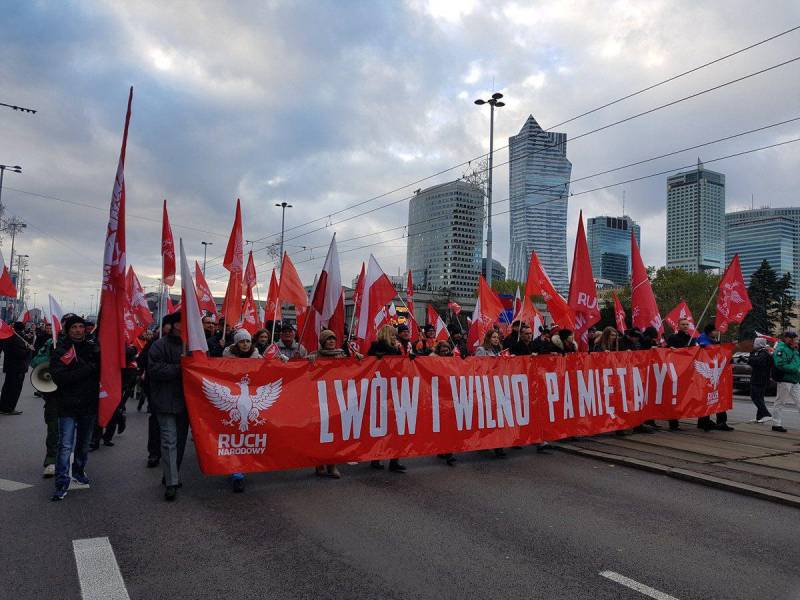 It is no secret that nationalists are in power in Poland. The point is not in the name of the ruling party and not in the program documents - the point is. In the country, nationalist hysteria is deliberately intensified from year to year. At the same time, it must be remembered that Poland is one of the most mono-national states in the world, managing even to press out not only Jews, but also Ukrainians, Lithuanians, Belarusians (not to mention Germans) even at the time of their socialist past. And the march of nationalists in Warsaw is a clear testimony to this.
Timed march to the celebration of the Independence Day of Poland, fell on Saturday, November 11. Even the Air Force was forced to state that "the march of extreme right-wing nationalists, in which, according to some estimates, about 60 thousands of people took part, this year eclipsed all state and other patriotic events ... The march became one of the largest such demonstrations in Europe. .. ".

The Air Force calls the minimum figure. A number of media outlets estimated the number of participants in 100 thousands. And this is despite the fact that the ruling conservative party did not participate in the march and held a lot of official events and ceremonies. 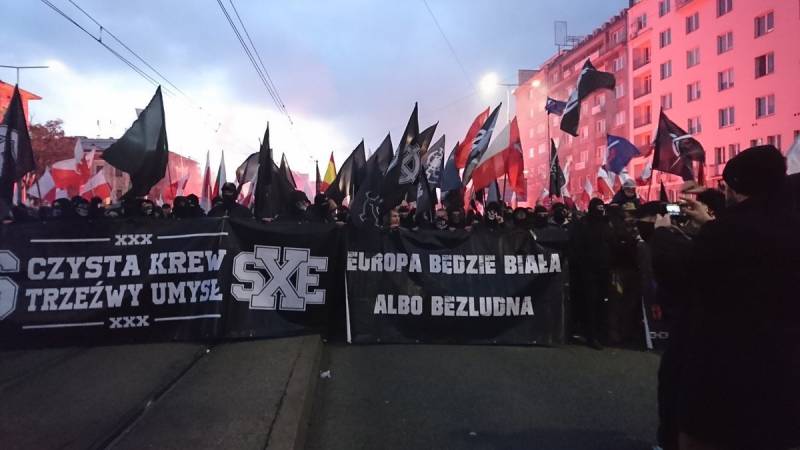 But the Polish state television company TVP, which covered the march, called it "the great march of patriots."

You can add - frank patriots. Who directly and honestly wrote on their posters that Lviv is a Polish city. However, like Vilna. The latter greatly complicates the coexistence of Warsaw and Vilnius in the European Union and NATO, but it also gives Lithuania hope that in the foreseeable future neighbors ’claims to half of their already tiny state will be curbed. Moreover, the Poles have something to do in the East.

And here there are very interesting changes. All 5 years of being in power Yushchenko, Poland in the focus did not notice the Bandera ideals. Although it was precisely after the first Maidan that the efforts of official Kiev and various activists throughout Poland poked memorials, crosses, caches et cetera. True, the local people broke it regularly under the guise, but the activity continued, Warsaw even detained the Vandals and continued to applaud Yushchenko even after assigning the titles of heroes to Bandera and Shukhevych.

They shackled the second Maidan. Yes, in fact, the Poles participated in it. The same Jaroslav Kaczynski spoke from the tribune of the Maidan 1 of December 2013 of the year: "The EU needs you." 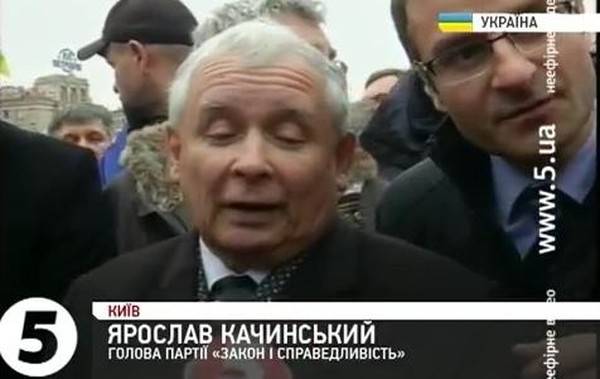 And all the past years, Warsaw did not stop praising Poroshenko’s regime, calling itself the best friend of his regime and “a conductor of Kiev’s interests in Europe”. At the same time gradually preparing public opinion in Poland itself in order to legally recognize Volyn massacre as a genocide of the Polish people. Accordingly, recognizing Polish citizens to Bandera, Shukhevych and all Ukrainian nationalists as criminals. Prohibiting at the same time their organizations OUN and UPA. Warsaw was not even embarrassed that here they were in solidarity with Moscow.

On the contrary, Warsaw is very calm and consistently annoying Kiev. In April of this year, another monument to the UPA was demolished in the Polish village of Grushovitse. And now the demolition is authorized by the authorities, and not shares of nationalists.

At the same time, Warsaw, without ceasing, declares his patience. how сказал Polish Foreign Minister Vashchikovsky: "We still have patience, but other European countries, like Hungary and Romania, are already beginning to act against Ukrainian interests. For example, in December there will be no meeting of the NATO-Ukraine Commission at the level of foreign ministers because of the Hungarian veto."

In fact, very frankly. Poland deliberately did not participate in the well-deserved persecution of the Kiev regime after the adoption of the odious law on education. Putting in their place Romanians and Hungarians, the Poles quietly support and threaten. The same Vashchikovsky advised "to explain to the Ukrainians that they may have real problems, not necessarily created by Poland ...".

What kind of “Ukrainians” the minister was talking about, it became clear after Vyatrovich’s ban to enter Poland. This civil servant actually heads the institute of national memory from the time of Yushchenko - the office for rewriting originally created by the SBU stories.

Marek Zapur, vice-consul of the Polish Consulate General in Lutsk, echoes his minister. He directly called Lviv a Polish city. Moreover, after the outbreak of scandal, Mr. Zapur clarified that there was a view of Lviv in 1918, but he also added that most of the inhabitants were then Poles. Diplomatically without specifying how Bandera under the command of Shukhevych cut them after the city was captured by the Nazis.
Against the background of these scandals and statements, the main thing is not striking - Warsaw officially condemned and called criminals those persons and organizations that the regime relies on. Echidnye advice of the Poles to honor the "heavenly hundred and heroes of the ATO" is no more than a smoke screen - everyone understands that just all the "heroes" are just different nationalists and are enough to recall the OUN battalion and the gang of pravosek. 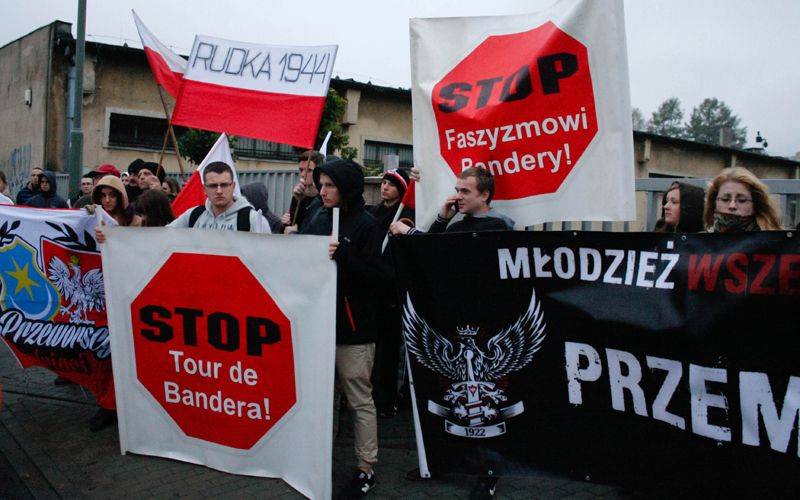 In fact, the Poles create a motivation base for themselves that will allow them to dissociate themselves from the ruling regime in Kiev at any time. At the same time, they also deliberately weaken it. I am well aware that it is the extreme right-wing neo-Nazi groups that are today the only ones who actively oppose Poroshenko, who has been elevated to the throne. This is where Poland beats, by inciting the Nazis against the head of the regime itself or by somebody else’s hands.

But it was from Poland that Saakashvili came to organize the next Maidan. Although just the Poles could easily wrap it. And the circus arranged by Mishiko suits them precisely with its sluggishness - at the right moment you can always organize another “heavenly top ten” and fit a couple of hundred militants with weapons. Everything is possible, the main thing - there is a reserve for the designation of "popular protest."

If we recall that there is a Lithuanian-Polish-Ukrainian brigade ... The political decision was made again under Yushchenko, and in 2014, the next regime rushed into the arms of its "best friends." Who happily agreed. 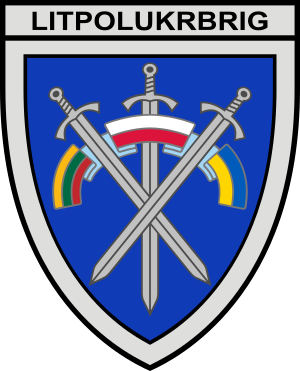 As a result, today the team is formed. The headquarters is in Polish Lublin. But only if Yushchenko planned equal proportions from each country, then in fact it turned out that the composition of the brigade included about 3,5 thousand soldiers of Poland, from 150 to 350 gave Lithuania and the entire 560 - APU. At the same time, of these, only 15 officers joined the brigade headquarters. With more than a hundred officers in the headquarters! So even the question is not, who commands the brigade and whose orders it will carry out.

At the same time, the Poles will still look like peacekeepers, heading to Galicia "to protect civilians whose lives are threatened by bandits and nationalists who have fled." And Warsaw knows that the days of Poroshenko are numbered. Six months or a year later, but the Kiev regime will live to see the next traditional Maidan, with the next coup (and all neighbors will help this Maidan as much as possible).

Then Warsaw will immediately remember hundreds of thousands of people living in Western Ukraine with “Pole's cards”. And suddenly he will announce how many Polish citizens live in Galicia. And Lviv residents will meet LITPOLUKRBRIG as the Wehrmacht once met - only this time they will not write "Glory to Bandera" on the posters.

As for the Ukrainian nationalists themselves, Poland has the richest experience. In addition, the local population for the opportunity to "move directly to the EU" itself will crush any overly fanatical ukronacii.

And for the sake of joining the “primordially Polish lands”, and for its “Cresy voskhodni”, Warsaw will spit on the opinion of Brussels and on the opinion of Washington. Moreover, the support of Bucharest and Budapest is guaranteed to them.

Today, we see the preparation of the motivating part, which will allow quite a European way to chop off a piece of fatter from a collapsing Ukraine. Volyn can also be regained, having paid for that very massacre ...

Ctrl Enter
Noticed oshЫbku Highlight text and press. Ctrl + Enter
We are
Polish claims to Ukraine. Will Warsaw decide to “bite off” Galicia?Situational analysis of the death of the MH17 flight (Malaysian Boeing 777), made on the basis of engineering analysis from 15.08.2014
Military Reviewin Yandex News
Military Reviewin Google News
27 comments
Information
Dear reader, to leave comments on the publication, you must to register.