New WAC47 machine for the army of Ukraine

November 13 2017
86
Back at the beginning of 2017, information appeared on the rearmament of the Ukrainian army. It is about replacing the Kalashnikov with a new WAC47, which is a version of the M4. Given the country's desire to become as “westward” as possible, this phenomenon is quite natural and something similar could be observed in the countries that were once part of the Warsaw Pact and now are members of NATO. Let's try to get to know the new machine and find out why and how it claims to be the new main manual. weapon for the army of Ukraine.


Reasons for upgrading and prospects for the WAC47

The main reason for the rearmament is quite obvious - the need to use single ammunition with new Western partners. However, the situation in the country is somewhat different from, say, the same Poland, where at one time this question also arose. 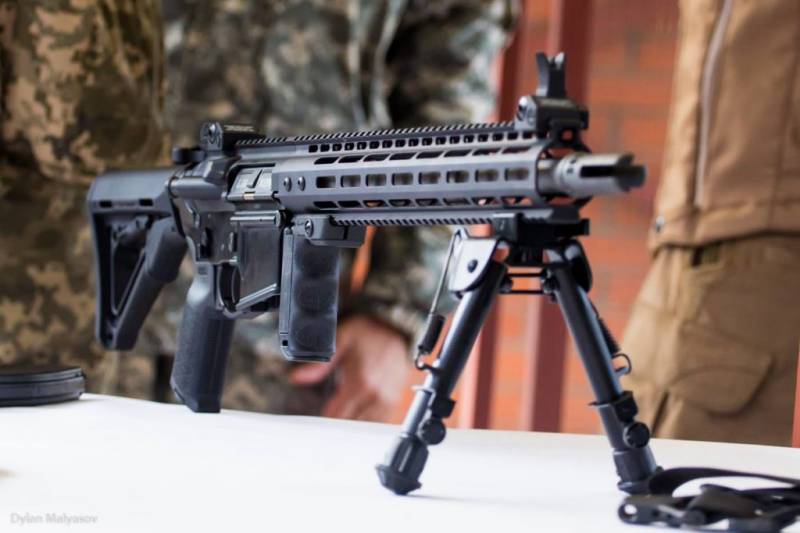 At the moment, the main ammunition of the Ukrainian army is our domestic 5,45x39. The patron is massive, there are many in its warehouses, but with account of the conduct of hostilities any “many” ends sooner or later. In this regard, there is a need for regular replenishment of the stocks of this cartridge, and the only large cartridge plant is located in Lugansk. That is, the country’s own production of ammunition is no longer there, at least on the necessary scale. By itself, the 5,45 x39 cartridge is inexpensive, in principle, as a temporary measure, you could consider buying ammunition abroad, but in the west 5,45х39 is present nominally in the market, but clearly not in the quantity and price that it would suit. It remains only to buy in Russia, which even sounds, at least, strange.

There is, however, an option to get ammunition from countries that are friendly with Russia, but, firstly, no one wants to spoil these friendly relations, and secondly, intermediaries want profit from resale, which will significantly increase the cost of ammunition for Ukraine. No one wants to risk just for a meager fee.

It would seem that such a situation is an excellent catalyst for the transition to new ammunition of the NATO standard, and in principle it is so, but in the current situation this transition needs to be done urgently, while there are no factories that could be simply refitted at the moment. no, actually nothing. Everything has to start from scratch, starting with the foundation of the same plants, and all this had to be done yesterday, and even better the day before yesterday. 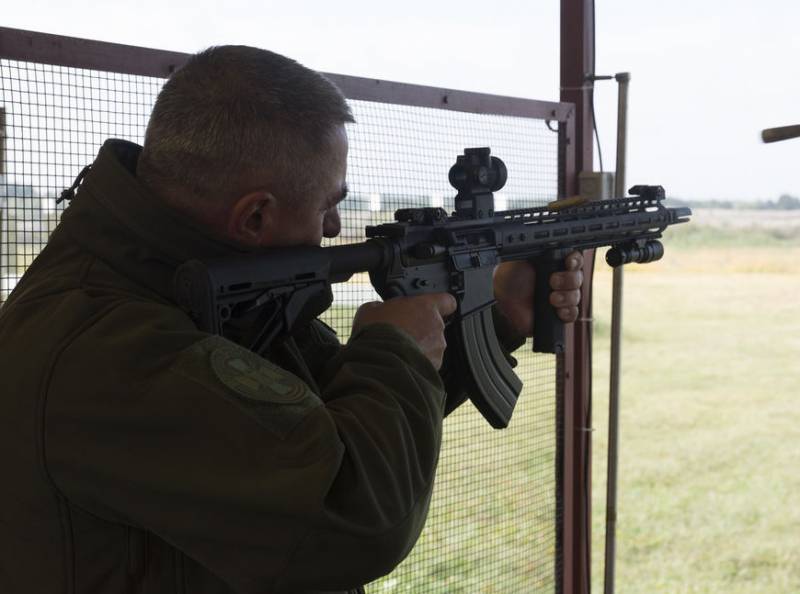 Provided that in the near future a transition to NATO standard cartridges is expected and the problem must be solved with the production of not only ammunition, but, ideally, weapons, then it is logical to make this transition right now than to spend money on retooling new plants.

For example, the same Poland was not so limited in time for the transition to a new ammunition that it even managed to develop its own weapon under 5,56х45, by the way, initially based on a Kalashnikov, one could even say an alternative branch of weapon development.

Thus, Ukraine, at the moment, is forced to cling to any help in the process of transitioning the army to a new cartridge and weapon for it, as well as deploying production in its territory.

This assistance was unexpectedly decided to provide the American company with Ukrainian roots - Aeroscraft. This company began its journey in the city of Lviv, but in the year 1994 moved to the United States, where to this day it has been developing tracking systems based on airships. The company does not have its own developments in firearms, based on the information presented on the site. Nevertheless, Aeroscraft offered assistance to Ukroboronprom at the start of production of the new WAC47 machine gun, which is essentially M4, of course, under license.

October 5 2017, a demonstration test of new weapons was carried out, after which the first trial batch of new machines was transferred for use in the army.

The design of the machine WAC47

As mentioned earlier, the WAC47 is a very close relative of the M4. A distinctive feature of this product is the implementation of its modularity, allowing not only to change the length of the barrel of the weapon, but also to adapt it for various ammunition.

The machine itself was originally designed under the chambered 7,62x39, which in the current situation is a very fortunate combination of circumstances. If we consider that the 5,45х39 cartridges are running out, then before the start of production of new ammunition, it is logical to use up the Soviet stocks 7,62х39.

In principle, the design can not focus on, given its similarity with the M4.

The main problems of the machine WAC47

If the WAC47 machine gun were considered in the context of just a new type of weapon, then the requirements for it, of course, would be softer. However, in this particular situation, a number of variables are added that raise questions and make you draw certain conclusions.

First of all, I propose to consider in more detail the “multi-caliberity” of weapons in the context of financial expediency.
In order to change the used ammunition from 7,62x39 to 5,45x39, only the barrel and the weapon shop need to be replaced. Provided that such a replacement can be made on the spot in a military unit, then this is only a plus for weapons. However, we are interested in the transition to the cartridge 5,56х45. In order to switch to this cartridge, it will be necessary to change: the trunk, the gate larvae, if not the entire bolt group, as well as the lower part of the receiver (in a fashionable lower receiver), as the other store will be used, respectively, and the receiver of the store will be different. It turns out that when moving to a new ammunition, you will need to replace half of the parts, and those that were removed will rust somewhere. In the event that a change of ammunition was achieved not by replacing individual parts, but by changing weapons, the old machine guns could be realized even within the country, depriving them of the possibility of automatic fire. In this case, there will remain a large number of trunks, parts of the receiver and gate larvae, which are not needed by anyone and for nothing.

Another interesting issue is the reliability of the machine with our domestic cartridges. It's no secret for anyone that our weapons are very good, so good that they work great with the most ... not the best cartridges. However, the automation system with the impact of powder gases directly on the bolt carrier is very sensitive to ammunition, in particular to the powder composition. Whether all this will work with domestic cartridges, which are designed entirely for other weapons, and whether it will work reliably is a moot point. 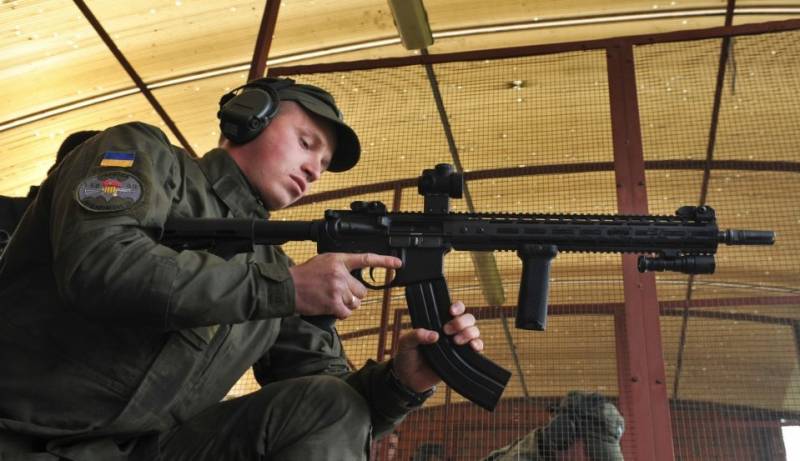 Of course, this statement can be contrasted with the experience of civilian weapons, among which there are a sufficient number of models with a similar system of automation and which perfectly feed on domestic-made cartridges. But there is one thing. Civilian weapons are always licked, cleaned and licked again from all sides. Usually the maintenance of weapons for the owner is an entire ceremony, in the army it is a necessity, and if a person is forced to do something, then most often he does it badly. Do not forget that many are accustomed to the AK, which tolerates the most barbaric attitude towards them, you will have to watch out for the new weapon.

Despite the fact that the first small batch of new machines has already been transferred to the Ukrainian army, it cannot be excluded that even after the allocation of funds for the construction of a plant for the production of a new machine gun and ammunition plant, something will really be built. Whatever one may say, the situation in the country is very unstable and one has to be a very risky person in order to allocate funds, and not small ones, for quite large projects. 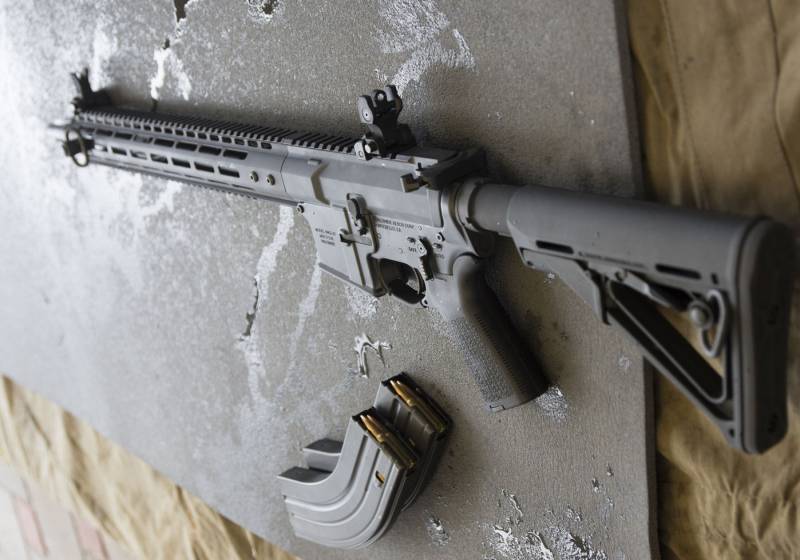 If, nevertheless, the plants will be built, it is not known how the production of the new machine gun will be organized, whether it will be completely Ukrainian weapons or whether it will simply be assembled from foreign component modules. If we are talking about the last option, then in principle nothing is needed to build; it is enough just to select a few large rooms.

In general, it is strange that in the presence of its own developments, and quite interesting ones, Ukroboronprom decides to produce something under another's license. In any case, it is too early to draw any specific conclusions on this cooperation, for the time being we can only assume and continue monitoring.