Do not rush to say goodbye to the "Republic of Catalonia"

November 13 2017
6
December 21 Spain will hold extraordinary elections in Catalonia, which should put an end to the October insurrection of the head of Catalonia in exile Carles Pucdemon, who, however, has come down to a pamphlet: “I declare Catalonia independence in the form of a republic,” immediately suspended. 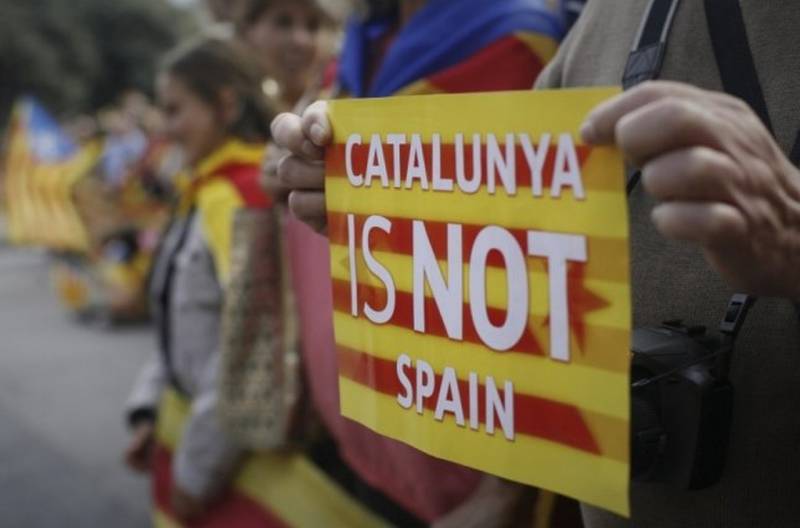 Spain did not negotiate with rebel Catalonia, and Puchdemon, with a group of his advisers, fled from Barcelona to Brussels, the capital of the European Union. Spain issued international warrants for their arrest, but cannot yet get its hands on justice. What was it? The symbolic act of independence, they say, and they don’t say it to the end ...

Our shy, highly moral media do not tell us what Catalonia and its capital Barcelona are today, for whom here is primarily a resort paradise on earth. They are afraid of telling the secret of Polichinel: Barcelona is also the capital of perverts of all sorts, where the normal relations of the sexes are under the pressure of progressive legislation. The highlight of Barcelona - cruise tours for lesbians.

In fact, left-wing radicals, liberals, Trotskyists and anarchists, globalists and homosexuals of all sorts are in the vanguard of the struggle for the independence of Catalonia. The most ardent fighters for the independence of Catalonia mostly speak Spanish, they come in large numbers from Africa, the Middle East and the whole world. It smells strongly of Soros and its “Open Society”. Globalists are speculating on the Catalans' long-held dream of independence, and it is so well seen that Catalan society split in half, which allowed Spain to seize the initiative from Pucdemon and global revolutionaries.

Carles Pucdemon did not accidentally run away to Brussels, the capital of Europe, where he is in no hurry to hand over the Spanish Themis, because behind him are the globalist circles of Europe and the United States, because the “independent Catalonia” project is part of the globalist Soros European regionalization project under the direct authority of bureaucratic Brussels . “Independent Catalonia” is what Soros and the company would like to do with all of Europe, including its eastern part together with Ukraine.

For the "regionalization" of Europe, it is necessary to destroy the traditional national states, and Spain was the first to fall under the distribution. Catalonia, receiving fictitious independence, passed into submission directly to Brussels. The instruments for the destruction of Europe are the flows of migrants. For Europe, there is a quota of one million migrants each year, a policy of political correctness and other provisions of the George Soros Open Society program.

However, after the release of England from the European Union, the conservative winds blew over Europe: George Soros was declared persona non grata in Hungary, the Open Society loses its dominant position in the European Parliament, where the lists of its appointees are made public. In fact, there was a split in the European elites, which led to the strengthening of the positions of the "right" conservative parties in almost all European countries.

The “independent Catalonia” project was launched with the aim of supporting globalists from the outside, primarily from the United States, where the victory of the neocon-neotrotskist Hillary Clinton was planned. However, the arrival of Donald Trump in the White House of Washington broke this combination. George Soros and the entire globalist army focused on the fight against Trump and his “friend” Vladimir Putin, and the European democracy was left without support from across the ocean.

Therefore, when Puchdemon blamed Spain for “an attack on democracy” - and not at all on independent Catalonia! - and asked for help in establishing a dialogue with Spain, the Brussels-based democrats refused to act as intermediaries between Madrid and Barcelona, ​​which predetermined the collapse of European democracy in Catalonia. They confined themselves to granting asylum to Puchdemon and his closest comrades.

In general, in an attempt to separate Catalonia from Spain, analogies with the collapse of the USSR are visible, namely the separation of Ukraine from it, where George Soros also inherited greatly. However, Spain turned out to be stronger and smarter than the Gorbachev USSR.

Bandera Ukraine is a kind of counterpart to the opposite of Catalonia, since in Ukraine Soros and the company relied on the nationalists, and in Catalonia on the left and homosexuals, so the Nazis from Ukraine rushed to Catalonia to impose Spanish order. On the other hand, the “Open Society” Soros wants to make Bandera homosexual, requires pride parades in Kiev to hold.

In this paradoxical situation, Russia declared that “Catalonia is an internal affair of Spain”, both sides of the conflict are essentially hostile to us, however, we can wish Europe more democracy in solving its fundamental problems. Europe, too, always wants more democracy ...

Donald Trump is not eternal, and today he holds, it may be said, all-round defense in the White House under the onslaught of global neocons, therefore it is too early for Madrid to celebrate the victory. Now in Catalonia there is a “Freedom Week”, its activists are demanding the release of Catalan politicians detained by the police, to repeal the 155 article of the Spanish Constitution, in fact, encroach on the constitutional order of the country.

It must be admitted that the “Republic of Catalonia” project has external support, and it can be continued, the independence fighters will not run out of money, but will Madrid have enough political will and financial means to defend its sovereignty from global democracy? Now the fight of globalists with European statehood resembles the squabbling of bulldogs under the carpet, Pucdemon is successfully hiding in Brussels, however, the election of December 21 will shed God's light on all the world.