In the eyes of Russia, Nazarbayev and Atambayev quarreled a hundred million dollars

November 13 2017
28
Stories This conflict has already been in place for a month, but the quarrel between the two presidents does not fade, but maintains its negative dynamics. On Thursday, in the third and final reading, the deputies of the Kyrgyz parliament approved the denunciation (termination) of the “Agreement between the Government of the Kyrgyz Republic and the Government of the Republic of Kazakhstan on the development of economic cooperation in the context of Eurasian economic integration”. According to this agreement, Astana provided Bishkek with a $ 100 million-dollar grant to improve customs operations, sanitary and epidemiological surveillance, compliance with phytosanitary and veterinary measures. 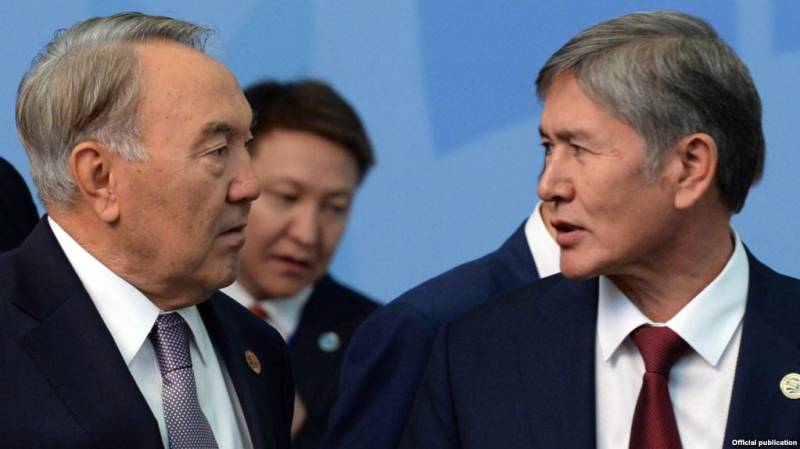 What made the president of Kyrgyzstan get hot?

Speaking at a meeting of the parliament, the Deputy Prime Minister of Kyrgyzstan Duishenbek Zilaliyev noted that the government will now try to find these funds "from the budget and external sources." Zilaliyev explained to the deputies that the denunciation of the agreement was caused by the delay of Kazakhstan in the provision of the promised grant. However, everyone in Kyrgyzstan and outside it was well aware that this initiative of Bishkek is a reaction to the quarrel between the presidents of the two countries.

The reason for her was the meeting at the end of September by the President of Kazakhstan, Nursultan Nazarbayev, with the candidate for the post of the President of Kyrgyzstan, Omurbek Babanov. Babanov in the last 15 of October elections competed with Sooronbay Zheenbekov, a protege of the current Kyrgyz president Almazbek Atambayev.

“I know you for a long time,” Nazarbayev praised Omurbek Babanov in front of the television cameras. - Engaged in business (oil products trading in Kazakhstan and Kyrgyzstan - ed.), Gained experience. Headed the government. If the Kyrgyz people support a person like you, then Kazakhstan will support him at any time. ”

Nazarbayev’s attention to the opposition candidate aroused a storm of indignation among Atambayev. The President of Kyrgyzstan immediately accused his colleague of trying to “influence the choice of the Kyrgyz people,” along the way he walked on the topic of “irremovability” of the government in Kazakhstan, called it oligarchic (by the way, the state of Omurbek Babanov is estimated at $ 1,5 billion) and expressed the wish that Kazakhs following the example of the Kyrgyz "rejuvenated" their power.

Observers say about Almazbek Atambayev that he "starts up with a half-turn." A hot Kyrgyz leader sometimes has to calm his heart with the help of doctors. So it was, for example, last September, after his visit to Ankara. There he refused to follow the “friendly advice” - to close private Turkish schools and universities in Kyrgyzstan, funded by Fethullah Gulen, whom President Recep Erdogan accused of organizing a failed coup d'état.

Shaken health in Turkey, Almazbek Atambayev restored in Moscow, in the Central Clinical Hospital of the Office of the President of Russia. Returning to Bishkek, Atambayev once again made the Kyrgyz “phi” for the Turks - congratulated Cyprus President Nikos Anastasiadis on the 56 anniversary of the independence of the Republic.

He had never done this before, adhering to the Turkish position in the territorial dispute in Cyprus. Moreover, in his congratulations, Atambayev expressed "an interest in the development of friendly relations between Cyprus and Kyrgyzstan" than finally upset the relations between Bishkek and Ankara.

That conflict with Erdogan was largely forced for Atambayev. The fact is that over the long years of work in Kyrgyzstan, the educational structures of Gulen have practically formed a new political elite of the country. Today, graduates of Gülen universities occupy the majority of high government posts, constitute the core of local political and public associations and business structures. The side of these people and took the president of Kyrgyzstan in a dispute with a Turkish counterpart.

Nazarbayev is different. The Kyrgyz president regarded his attention to the opposition candidate as an attack threatening Atambayev’s personal interests. What are they rooted in?

It is known that in post-Soviet Kyrgyzstan, power changed only during local revolutions and coups. Nominated for the presidency of 2011, Almazbek Atambayev promised the country that at the end of his term of office he would provide competitive democratic elections in which he would not participate.

Voluntary refusal from a post is not absolutely refusal of the power. Such examples are familiar to us. The Kyrgyz are aware of them. Last year in a referendum, they voted to expand the powers of the head of government. This laid the foundation for the “castling”, in which Atambayev again became prime minister (he had already headed the government in 2010-2011), and his nominee (Sooronbay Zheenbekov) became president of Kyrgyzstan.

The intervention of Nursultan Nazarbayev could destroy this unpretentious construction. Experts say that only a photo in which the president of Kazakhstan shakes Omurbek Babanov’s hand added three to four percent of the vote to the opposition candidate at once. In Kyrgyzstan, Nursultan Nazarbayev is respected. The economic well-being of neighbors is associated with his name. (According to Nazarbayev, Kyrgyzstan’s GDP is five times less than Almaty’s GDP). The actual inclusion of the Kazakh leader in the Kyrgyz election process would have thwarted all Atambayev’s plans. And he cried.

The first thing Almazbek Atambayev did was to cancel his trip to Sochi to the meeting of the Council of Heads of State of the CIS, citing the possibility of mass riots in the republic. Observers interpreted this demarche as an offer to Moscow to become an arbiter in the conflict of neighbors. However, the Kremlin did not (at least publicly) react to the call of the Kyrgyz president.

But Nazarbayev reacted. Already on October 10, accusing its neighbors of non-compliance with sanitary and veterinary standards, Kazakhstan strengthened customs control and reduced the number of checkpoints on the border with Kyrgyzstan. Soon there arose a multi-kilometer long queue of 500-600 trucks.

It takes up to five days for drivers of heavy trucks to cross the border. This is unacceptable for perishable, above all, dairy products, which Kyrgyzstan supplies to the south of Kazakhstan. The export of "jelly" almost stopped. The vacated niche was immediately filled by Russian business, simultaneously raising local prices by 20-30 percent.

Experts believed that after the election, the situation will return to normal. But the elections have passed, but the “border is” to this day. In early November, at a meeting of CIS heads of government in Tashkent, Kyrgyz Prime Minister Sapar Isakov voiced this problem. He called it "the actual blockade of Kyrgyzstan from the partner of the Eurasian Economic Union (EAEU) - Kazakhstan."

Isakov’s colleagues were sympathetically abandoned, but they did not develop the topic, rightly believing that this dispute concerns, first of all, the Eurasian Union. Here Kyrgyzstan is difficult to count on unconditional support. After all, claims against Bishkek have been expressed for a long time. They did not deal with “jelly”, but with problems on the external border of the EEU — the Kyrgyz-Chinese one.

Through it flow counterfeit comes from China. It turns out, Kazakhstan has put a barrier on this path. After all, in an amicable way, there should be no internal customs borders in the Eurasian Union. However, the lack of discipline of the Kirghiz forced them to take measures to protect the EAEU market from poor quality and even dangerous products for people. This is how it looks in the assessment of the local media and Kazakhstani political scientist Peter Svoik - in the German Deutsche Welle.

Svoik believes that “Russia is in some way interested in having Kazakhstan influence on this issue (observance of the conditions for passing goods to the EAEU market - ed.) On Bishkek”. Therefore, the appeal of the Kyrgyz authorities to the Economic Commission of the EAEU with a complaint against Kazakhstan for violation of the trade rules of the Eurasian Union has no practical perspective.

Bishkek will be reminded that it is he who must comply with the conditions for the movement of goods across the external border of the EAEU. To do this, at a minimum, it is necessary to equip the customs infrastructure, equip sanitary control laboratories and increase the personnel’s responsibility for passing counterfeit goods.

Actually, for these purposes, and allocated funds to Kazakhstan, from which the Kyrgyz parliament so proudly refused last Thursday. In Astana, he was heard. Here is the answer. The Ministry of National Economy of Kazakhstan has developed its own bill of denunciation of the agreement with Kyrgyzstan, providing for the allocation of a grant of $ 100 million. It is assumed that these funds will now go to the development of the social sphere of Kazakhstan.

No matter what they say, but the crisis in the Kazakh-Kyrgyz relations is clearly prolonged. Both sides of the conflict have already felt its negative consequences. The unity of the Eurasian Economic Union is also threatened. In this situation, Moscow cannot simply keep silent. Experts predict that Russia will reconcile the parties after 24 November, when the newly elected president of Kyrgyzstan Sooronbay Jeenbekov will take office. However, the consequences of this crisis will long cloud the atmosphere in the EAEU.

Ctrl Enter
Noticed oshЫbku Highlight text and press. Ctrl + Enter
We are
Atambayev mistakenly stated that Russia did not pay rent in Kant baseRussia's interests in Kyrgyzstan are under threat
Military Reviewin Yandex News
Military Reviewin Google News
28 comments
Information
Dear reader, to leave comments on the publication, you must sign in.