What unites Moldova and PMR?

November 13 2017
12
Over a quarter of a century, to put it mildly, the relationship between Chisinau and Tiraspol is in limbo. Reciprocal reproaches flow like a river, and everyone sees their true truth in the actual cold confrontation. Chisinau accuses Tiraspol of separatism, although at one time it was pro-Romanian Moldavian separatism that led to the fact that the cold war did not break out on the banks of the Dniester anymore, and the severe crack spread between the territories of the united Soviet republic. In fact, Tiraspol still has the same pretensions to Chisinau - the desire of Moldovan elites to pull Moldova in the western (Euro-Atlantic) direction without taking into account the opinion of Transnistrians and with a simultaneous separation from Russia.


Under thirty years of mutual bodding, accusations, loud crying that "the issue will have to be resolved and by force." It is important to note that neither Moldova nor the Pridnestrovskaia Moldavskaia Respublika can frankly boast achievements, primarily in the economic and social spheres, which might look attractive to a neighbor, who actually plays the role of the enemy. Moldova is one of the poorest countries on the European continent.

Several positions of the Moldavian economy as an example of the fact that the declared course on European integration, in fact, is replaced by the stages of oligarchization of the country.

Item # 1: The Moldovan economy is one of the six economies in the world, directly dependent on remittances from abroad by the so-called guest workers. The annual total amount of transfers to Moldova comes to 1,8 billion dollars. This is taking into account the fact that Moldova’s GDP is about 7 billion dollars. This also means that if all the migrant workers, having inflamed their patriotic feelings, wish to return to Moldova, then they will face the phenomenon of a banal lack of jobs. That is why Chisinau does not oppose the departure of the economically active population paying taxes in other countries.

Item # 2: Moldova is a sad leader in terms of the shadow economy in the states of Greater Europe. At 2017, the share of the economic “shadow” exceeded a quarter of total GDP.

Item # 3: Moldovan households annually increase the percentage of products left for their own consumption. The share reached the level of 8%, which is an absolute record among all countries of the European continent. And obviously not reached from a good life. State structures in fact do not give (and cannot give) opportunities for farmers to fully enter the state market, much less participate in the export of goods. Moreover, going out with agricultural products on the domestic market of Moldova is the same as trying to sell seeds in the collective farm sunflower field, offering these seeds to buy to other members of the same collective farm ...

Item # 4: Moldova is one of the few countries in the world whose credit rating is simply refused to be determined by the largest international rating agencies, including Fitch and S&P. The reason: “they do not see the point”, since the Moldovan economy was and remains virtually insolvent, especially after the Russian counter-sanctions.

Is the situation in Transdniestrian Republic better in economic and social terms? The answer to this question is given by the meeting, which took place in the capital of the Republic of Tiraspol. The organizers of the rally from among the leadership of the Transnistrian Communist Party and other opposition forces acting authorities brought people to the streets of the city, who indicated specific demands to the authorities. One of them is to stop the rise in prices in the Transdniestrian Moldavian Republic, which has recently been hurt by Transnistrians in particular. Protesters demanded 40% compensation for wages and pensions, which were eaten up by inflation. Another requirement is the creation of thousands of jobs previously promised by 15 to revive the situation in various sectors of the economy. At the same time, the protesters separately draw attention to the need for further steps to integrate with the Russian Federation, above all, to deepen trade and economic ties, including those of an interregional nature. 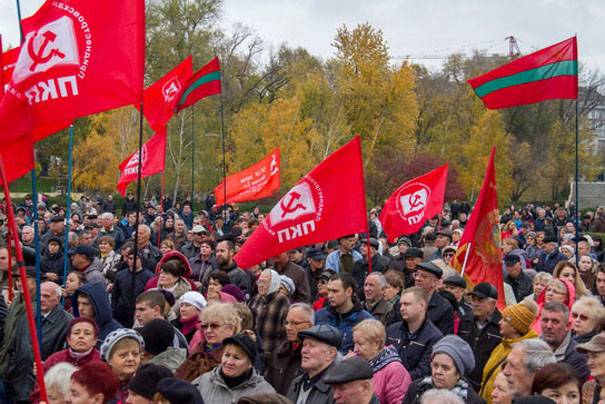 It is noteworthy that the slogans of the Tiraspol rally were supported by the former head of the MRT Yevgeny Shevchuk.

The head of the law enforcement system of Transnistria, Ruslan Mova, who received a letter from the opposition on holding a rally containing the appeal “not to provoke provocations by the supreme authorities,” noted that no one in Tiraspol is going to disperse such rallies, as in the Transdniestrian Republic they respect opinions.

Recall that their meetings are regularly held in Chisinau. And the basic requirements are essentially the same: giving up the policy of confrontation with Russia, creating jobs in one’s own country, giving up the idea of ​​de-neutralizing Moldova (depriving the constitutional status of a neutral state), respecting the rule of law and taking the economy out of shadow schemes and structures.

The sociological monitoring services show that the confrontational ideas of the Moldovan government, statements about the need to “go to NATO”, are not appealing to the main percentage of the Moldovan population.

It turns out that Transnistrian Moldavian Republic and Moldavia (talking about the people), in principle, want the same thing: to live in peace, to quietly develop the economy, with emphasis on its main pillars - agricultural (industrial and processing) enterprises. Everyone wants one thing, but here’s a problem: the situation does not break the deadlock, even though the presidents are at the head of the Moldovan state and at the head of the MRT, who for the first time in many years went to an open dialogue and expressed a desire to improve relations. How to solve a problem, when a small group of people who identify themselves as elites, deliberately does everything so that the confrontation line between Chisinau and Tiraspol is not erased.

In late October, Moldovan President Igor Dodon announced an active campaign to collect signatures for the transition of the Republic of Moldova to the presidential form of government. From the material on Igor Dodon's website:
Across the country, in just the first couple of hours, several thousand signatures were collected. People actively subscribe. They stand for order, responsibility, a strong state and a strong vertical of power. I am sure that we will succeed. Together we win! 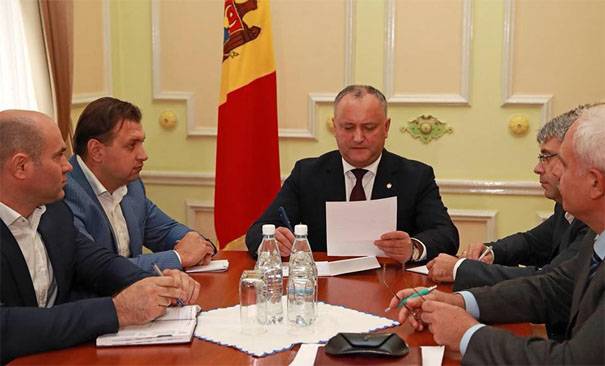 The reason for the destruction and frustration is indicated: the absence of a strong state. Speaking even more openly, it is not even about the absence of a strong state, but about the absence of a state as such. And the state is absent, as the elites have so far tried to isolate themselves solely on their own mercenary components, frankly refusing even to designate dialogue with the population. Dodon decided to go for broke. Despite the monstrous pressure from the parliament and the government, from oligarchic interests, he ventured to authorize a direct dialogue with the residents of Transnistria. The first step is a dialogue with residents of the border areas for the implementation of tasks related to trade, economic and social contacts.

Igor Dodon:
Considering the numerous appeals of Moldovans from the areas adjacent to the Dniester River, held a working meeting with officials from the presidential office on opening public receivers in order to establish a direct dialogue with residents of cities and villages, including the settlements of Transnistria.

The activities of public reception offices are designed to eliminate unnecessary bureaucratic obstacles, to increase the efficiency and efficiency of the Presidential Administration in providing assistance to residents of both banks of the Dniester.

At the first stage, public receptions are scheduled to open in Rezina, in s. Koshnitsa and s. Varnitsa. I do not exclude that, as a continuation of this work, such reception rooms will be opened in most regions of the Republic of Moldova.

Parliamentary and governmental circles of Moldova immediately accused Dodon of “playing in the interests of Russia”. An interesting “cinema” is obtained: if the president declares the need for a cross-border dialogue between the inhabitants of the Republic of Moldova and Transnistrian Moldavian Republic, is this a “game in the interests of Russia”? It turns out that the pro-oligarchic Kishinev elite itself describes that such a dialogue is not in its interests. And if the Moldovan political elites are not in favor of a dialogue, then they are for the continuation of the confrontation that the Moldovan economy has been drowning in recent years, enriching only the oligarchic circles mentioned and leaving Moldova as a gray zone in the center of the European continent. Perhaps these same circles are too sure of their own unsinkability ...

The result is an interesting picture: on both banks of the Dniester, rally for economic development, for dialogue, for Eurasian integration, for the creation of jobs. The requirements are simple and intelligible. But is there a single force capable of drawing lessons from this protest and realizing the wishes of ordinary citizens?

Ctrl Enter
Noticed oshЫbku Highlight text and press. Ctrl + Enter
We are
Armed Forces of Transnistria: 23 of the year since its foundationRussian peacekeepers again want to "demobilize" from Transnistria
Military Reviewin Yandex News
Military Reviewin Google News
12 comments
Information
Dear reader, to leave comments on the publication, you must to register.