Sturmgever and stamping. The truth about the Kalashnikov machine (Part of 2) 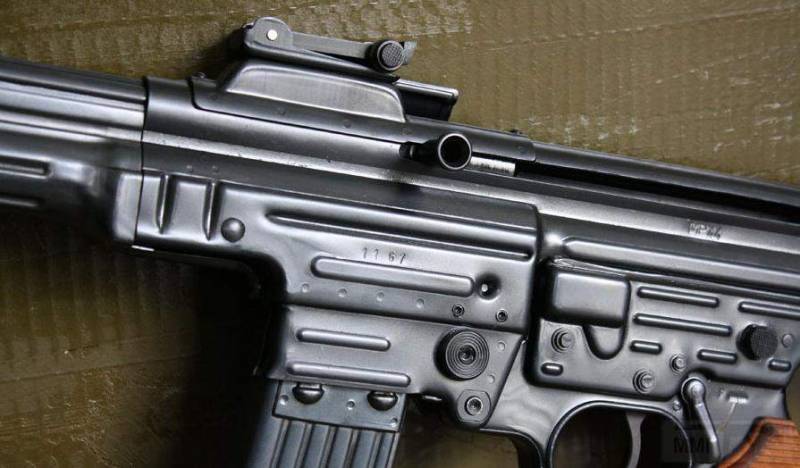 In the receiver, figuratively speaking, housed the heart weapons - its automation, what ensured the reliability of its work.
M.T. Kalashnikov. "Notes designer gunsmith"

In the production of Stg-44, low-carbon, relatively thin steel 0,8-0,9 mm thick was used. Hence, a large number of stiffeners and stamps on its details, which increase the rigidity of the structure, and on the aesthetic side give a kind of predatory, awesome charm to the weapon as a whole.

We will not do a detailed and high-quality analysis of the Sturmgeverov "punching" lapses. We confine ourselves to two visual facts, especially since they had a solution in the Kalashnikov assault rifle.

The main detail of the sturgevever is a milled gate box, 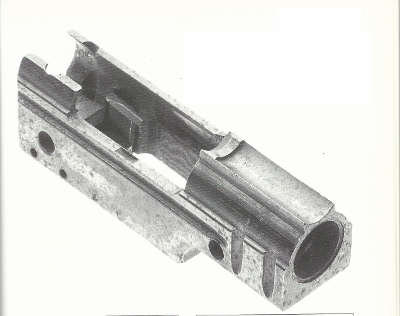 clad in sheet metal casing and bonded to it with spot welding.

The task of the box, in addition to reliable locking, is to ensure the basing of the magazine for reliable feeding of the cartridge into the chamber. Directly on the casing attached sighting device. And on the Mkb-42 (h), and on the STG-44 there were attempts to install removable riflescopes: one and a half ZF-41 and four-time ZF-4. 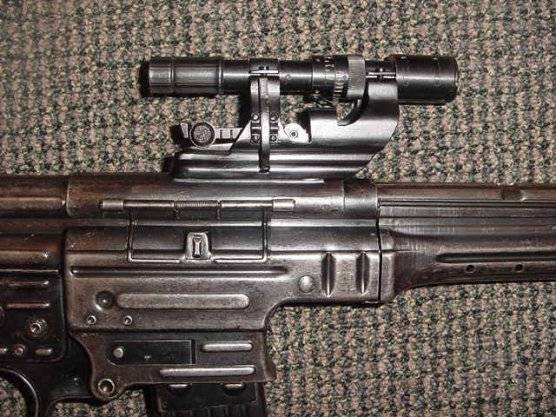 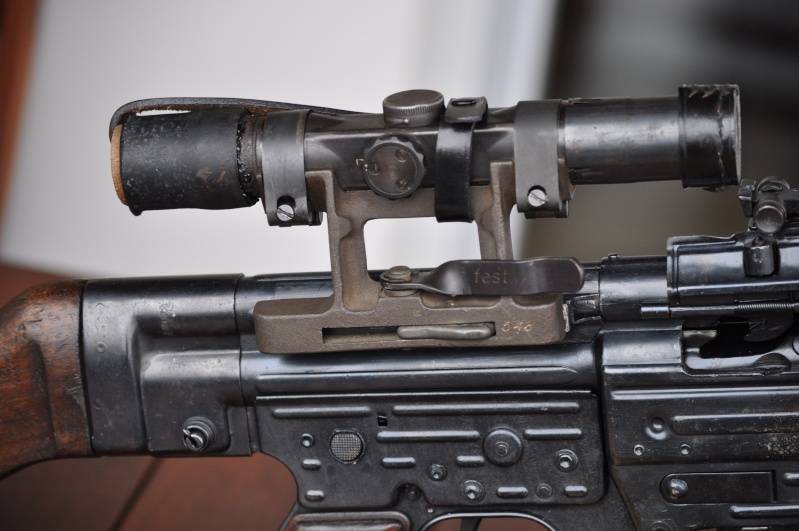 Both attempts were unsuccessful. This is due to the very "punching" of the casing, which did not provide the necessary rigidity, because of which, after several dozen shots or throwing the weapon on the floor, it was necessary to shoot it in a new way. So you can grunt as much as you like in optics on a sturmgevere, in real combat it was not used. Although it was technically possible to ensure the rigidity of the mounting of the optical sight, it was possible if its bracket was attached to the gate box, the truth for this might have been to increase it in size and weight. A significant positive moment in the optics of the Sturmgever is that it allows you to simultaneously use both sights - optical and open. This commonplace truth, which can cost a soldier life, was completely forgotten (or did not go to school) by our modern and not by our designers.

The second fact is connected with the fastening of the store in the bolt box, but at first some more from stories. When the Wehrmacht’s Oberst Friedrich Kittel’s weapons department developed the concept of weapons for an intermediate cartridge, it was supposed to replace them with submachine guns, rifles, carbines and light machine guns. The fact that the Sturmgever couldn’t be used to replace machine guns according to the intensity of the fire became clear when it was too late to drink Borjomi. But there is one interesting point. A machine gun or a bipod is required for shooting by machine guns, especially if the weight of the weapon exceeds five kilograms. So the use of the store as a stop is a fact. 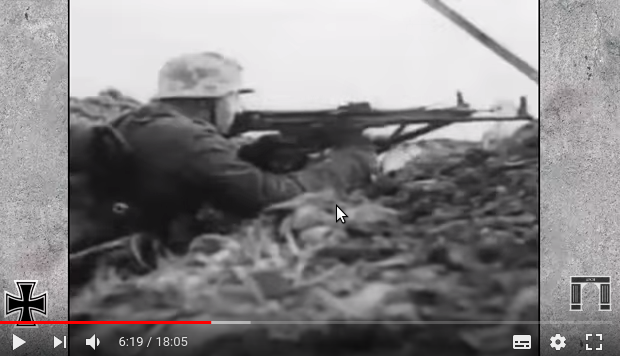 As a result - the store's chat 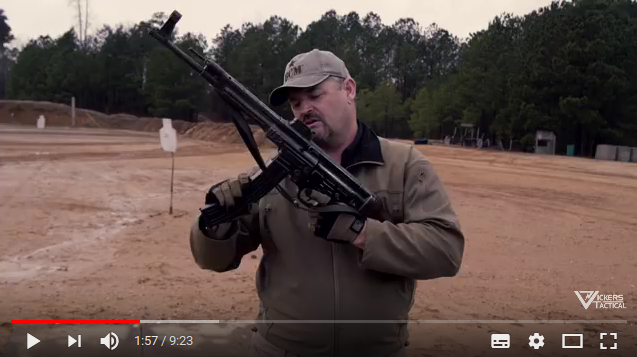 due to the deformation of the metal on the store and the receiving window. 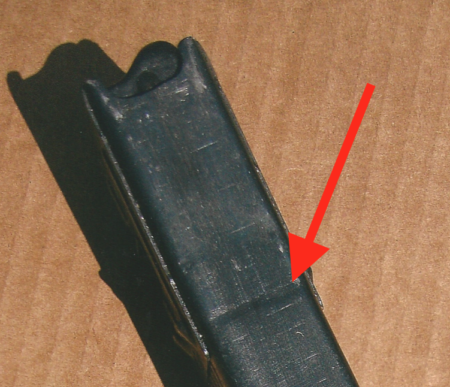 There is no substantial official information about the reliability of the Sturmgever, except for factory and field tests, where it has proved not to be brilliant. But there is a way to get a reliable idea about this issue. A couple of words from the theory of statistics. In order to understand what soup is cooked from, you do not need to eat the whole pan. One ladle is enough. We will interrogate such a ladle of confident users of the Sturmgever, they will tell us themselves. How? Very simple. There is such a person - Artem Drabkin, who created the site I remember, and on this site there are memories, including these same users. I found four, here are their opinions.

... In 1943, we received a new weapon - automatic carbines - storm troopers. We in the regiment carried out their army tests. Our battalion was the first to be fully equipped with assault rifles. This is a wonderful weapon that gave an incredible increase in combat capabilities! They had short ammunition, so that more ammunition could be taken. With her, each person became almost like a light machine gun. At first they had childhood diseases, but they were fixed. At first, we seized machine guns from us, but at the end of 1943, under Kolpino, we found that with these rifles, but without machine guns, we cannot do it in defense and very quickly put the machine guns back. So in the platoon were machine guns and assault rifles. We had no other weapons.

When I was captured, I had a sturmgever, a modern weapon, but he refused after three shots - sand fell.

We were armed by that time already with assault rifles 43, 15 (?) Of cartridges in the store. I think the Russians copied their Kalashnikovs from this rifle: they superficially look like twins. Very similar.
...
We were armed with the 43 assault rifle quite recently; we still didn’t have time to get used to the new weapon. I jerked the shutter, forgetting - from lack of sleep or whether God knows from what - that it is already charged. And the rifle wedged.

At first I had MP-38. Later there was a Sturmgever, it appeared in 1944. Even non-commissioned officers did not have it.
Etc.
Yes, it was a good weapon. I think that after the war these weapons were used in the Bundeswehr. His cartridges were a little smaller.

As you can see, in a random sample, half of the feedback responses are. The conclusion from this makes everyone for himself. It is obvious to me and simply confirms the own analysis of the design of the Sturmgever and the conclusion of General V.G. Fedorov: "The German automatic rifle does not deserve special attention from the point of view of its constructive qualities." Fans recommend to conduct a similar analysis on the site regarding the assessment of the use of the Soviet German captured weapons. Conclusions will be curious.

In the meantime, to summarize, one can sing the praises about the superiority of the German “stamping” 1942 of the year over the Soviet one in the 1949 year, but this very stamping was the source of the second problem of a stormtrooper - low reliability (the first is the lack of cartridges that no more than 2000 pieces were released) on one trunk). Americans, by the way, came to this conclusion in 1945 year. From the conclusion of the US arms department:

However, when trying to create with mass methods a light and precise weapon that possesses substantial firepower, the Germans faced problems that seriously limited the effectiveness of the Sturmgewehr assault rifle. Cheap stamped parts, of which it is largely composed, are easily subjected to deformation and chipping, which leads to frequent seizures. Despite the stated possibility of firing in automatic and semi-automatic modes, the rifle does not withstand continuous fire in automatic mode, which forced the leadership of the German army to issue official directives, ordering the troops to use it only in semi-automatic mode. In exceptional cases, soldiers are allowed to fire in fully automatic mode in short bursts of 2-3 shots. The possibility of re-using parts from serviceable rifles was neglected (interchangeability was not provided. - Author's note), and the general design hinted that in case of impossibility to use a weapon as intended, the soldier should have just thrown it away. The ability to fire in automatic mode is responsible for a substantial part of the weight of the weapon, which reaches 12 pounds with a full magazine. Since this opportunity cannot be fully exploited, this extra weight puts Sturmgewehr at a disadvantage compared to the US Army carbine, which is almost 50% lighter. The receiver, frame, gas chamber, housing and target frame are made of extruded steel. Since the trigger is fully assembled on the rivets, it is not dismountable; if repair is required, it is replaced entirely. Only the piston rod, bolt, hammer, barrel, gas cylinder, nut on the barrel and the magazine are machined. The stock is made of cheap, roughly treated wood and during the repair process creates difficulties in comparison with automatic machines with a folding stock.
.