November 11 2017
52
On Friday, British Minister of Defense Gavin Williamson met with his American counterpart James Mattis in the British capital. About the results of the meeting, Williamson called London the closest partner of Washington in confronting the "Russian aggression."

From the battles in the trenches of the First World War to the confrontation of Russian aggression and the battle with the "Islamic State" * (IG *), today the United Kingdom has been the closest partner of the United States throughout the last century
- cites the words of Williamson in a communiqué circulated by the British Ministry of Defense. 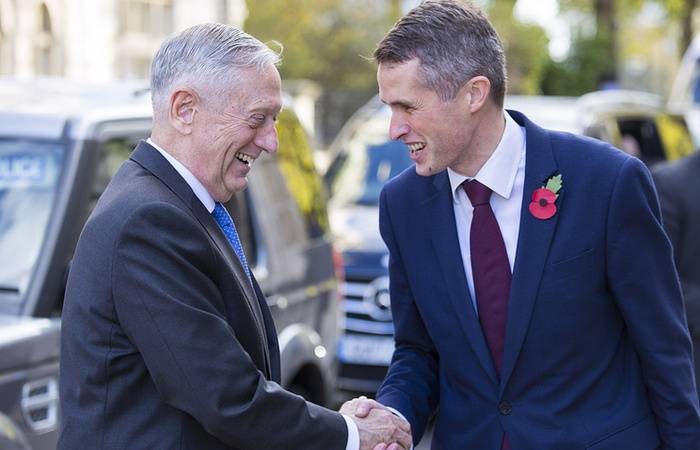 Today, our countries interact in everything from (military) operations and intelligence to innovation, and this meeting is an opportunity to continue strengthening our special relationship
- he added.

At the meeting, the defense ministers discussed the situation in Syria, noting that "although the IG * is close to defeat in Iraq and Syria, it continues to cause concern to Britain and the United States." In this regard, the British Defense Ministry confirmed its support for the international coalition of forces led by the United States, which conducts operations in Iraq and Syria.

Both (the minister) also discussed the increasing assertiveness that comes from the Kremlin as the UK stands shoulder to shoulder with the US and its NATO allies, leading a forward-based tactical group in Estonia and directing soldiers to the US-led military formation in Poland
- noted in the communique.

The head of the Foreign Affairs Committee of the Federation Council, Konstantin Kosachev, on the eve expressed the opinion that it is necessary to give a clear assessment of the ongoing demagogy of a number of countries, including the United States, about the "aggression" of Russia. According to the senator, at present, the "aggression" of the Russian Federation for individual states becomes a very advantageous reason to take opponents beyond the framework of international law and even morality, TASS reports.

Ctrl Enter
Noticed oshЫbku Highlight text and press. Ctrl + Enter
We are
Williamson: British Air Force will continue to attack the positions of the IG *Pentagon chief refused to meet with Poltorak
52 comments
Information
Dear reader, to leave comments on the publication, you must to register.