November 14 2017
54
The universal patrol ship of the Arctic zone of the ice class of the 23550 project was developed by the specialists of the Almaz Central Marine Design Bureau. It is a project of fundamentally new ships combining the qualities of an icebreaker, tugboat and patrol ship. The ship can be used in all navigation areas, from the Arctic to the tropical seas, while it is able to overcome the ice thickness to 1,5 meters. Currently, the construction of two ships of this type is planned, the first of them, "Ivan Papanin", has already been laid and is being built at the "Admiralty Shipyards".


As the general director of the Admiralty Shipyards, Alexander Buzakov, told RIA journalistsNews”, The first multipurpose ice-class patrol ship“ Ivan Papanin ”will be launched in the 2019 year, the transfer of the ship to the customer (Russian Navy) is planned for the 2020 year. Buzakov also told reporters that the laying of the second ship of the “Nikolai Zubkov” series of the same 23550 project is likely to take place in the 2019 year, the ship’s deadline is the 2022 year. The contract for the construction of a series of two patrol ships of the Arctic zone was signed on 25 on April 2016.

The Arctic class patrol vessel 23550 is designed to protect and monitor water resources in the Arctic; support and support of support vessels; convoy and towing to the port of the detained vessels; transportation of special freights; participation in rescue operations at sea; In addition, the ship can be used for independent artillery strikes against sea, coastal and air targets. According to the developers, the new ship will be able to effectively solve tasks in the Arctic zone, both as part of groups (detachments) of warships, and independently, and the patrol vessel will be able to carry out escort functions in the Arctic communications. 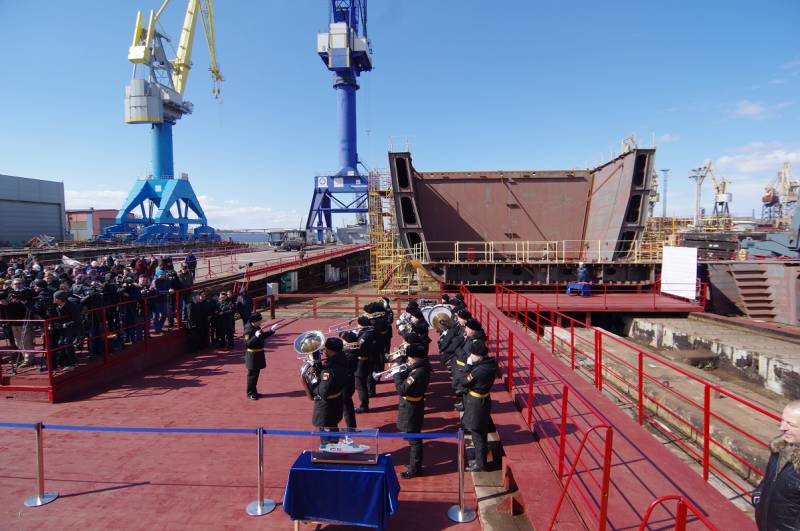 Bookmark of the 23550 “Ivan Papanin” multifunctional ice class patrol ship, 17.04.2017, photo: admship.ru
The 23550 project is undoubtedly unique to Russia and, in general, has practically no analogues in the world. Today only Norway has something of the kind, we are talking about Svalbard-type ice-class patrol ships that are in service with the Norwegian coast guard. This ship can also be used as a patrolman and is currently one of the largest ships in service with the Norwegian Navy. The ship is armed with an 57-mm Bofors automatic artillery mount and can carry one helicopter on board — the NH-90 or Lynx.

Exactly the Russian patrol ship of the Arctic zone will surpass Svalbard in terms of displacement (more than 2000 tons), size, armament and ability to work in ice. The Norwegian icebreaker is able to overcome ice fields up to a meter thick, while the 23550 project will be able to move in ice with a 1,5 meter thick ice (as noted by the general director of the Admiralty Shipyards, Alexander Buzakov, this parameter will be 2 meters). The development of Russian engineers seems to be more multifunctional, and the presence on board of an icebreaker of various weapons makes it a reliable means of protecting the Arctic water region.

The main tactical and technical characteristics of the ship project 23550, which are presented in press releases of the company "Admiralty Shipyards", are the following: displacement - 8500 tons; length - about 110 meters; width - about 20 meters; draft - 6 meters; maximum travel speed - 16 knots; crew / extra crew - approximately 60 / 50 people; autonomy of swimming - 60 days, navigation area - unlimited. There will be special equipment on board the ship, which is represented by a powerful towing winch of the order of 80 tons and two cargo electro-hydraulic cranes, each of which will have a carrying capacity of 28 tons. 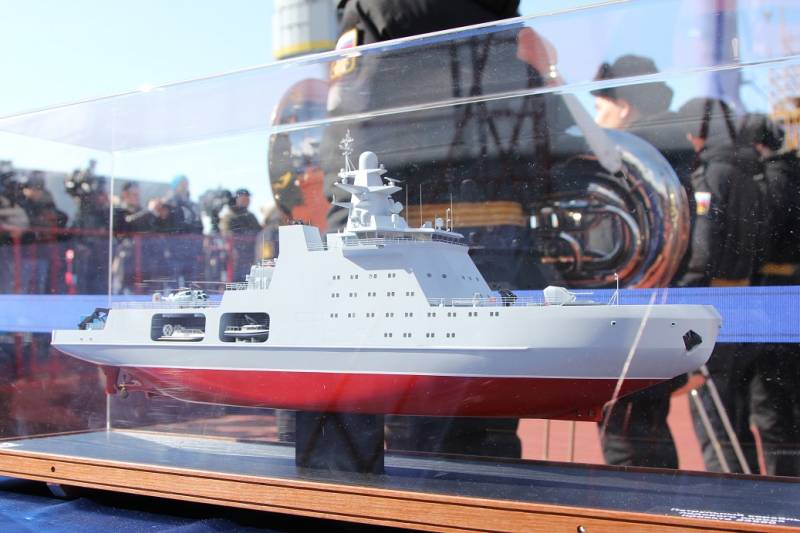 Model of the 23550 project ship, photo: admship.ru
The armament of the ship will be the automatic 76,2-mm AK-176MA artillery. Additionally, the ship will have a hangar and a landing pad to accommodate the Ka-27 anti-submarine or search and rescue helicopter. Also on board will be located two high-speed boats of the Raptor type, which can carry small arms on board and carry paratroopers to the 20. It is planned that unmanned aerial vehicles will also be based on the icebreaker.

The AK-76,2MA 176-mm artillery mounts is the latest modification of the artillery system adopted to date as early as 1979. Her successful ground tests were completed in the first quarter of 2017. Compared with the previous modifications, the upgraded AK-176MA installation more than doubled the accuracy of drive targeting, doubled the accuracy of firing, significantly increased the target pointing speed, while its mass decreased to 9 tons. According to the press service of the Arsenal Machine-Building Plant (St. Petersburg), the Russian Navy will receive a modern shipboard 76,2-mm gun mount that will be comparable to foreign analogues, and in a number of parameters will be able to surpass them. In total, up to 2020, the fleet will receive 22 of such upgraded gun mounts, which will appear mainly on ships of the near-sea zone.

Most likely, on board the ship project 23550 can be placed and rocket weapons. In particular, Club-K - container complex rocket weaponswhich is located in standard sea containers, is a modification of the Caliber missile system. A total of 2x4 vertical launchers, located at the stern of the ship. Due to the presence of missile weapons, the Russian “combat icebreaker” will be able not only to “punch” corridors for the passage of civilian ships and ensure the stability and safety of cargo transportation, but also, if necessary, destroy the violators of the Russian maritime borders. In fairness, it should be noted that officially the presence of missile weapons on board the icebreaker has not been confirmed. But indirectly, this is indicated by numerous renders, layouts and handouts, which were shown at various exhibitions. Also about this, again indirectly, are the words of the commander-in-chief of the Russian Navy, Admiral Vladimir Korolev, who said that the ship’s armament may vary depending on the tasks to be accomplished. 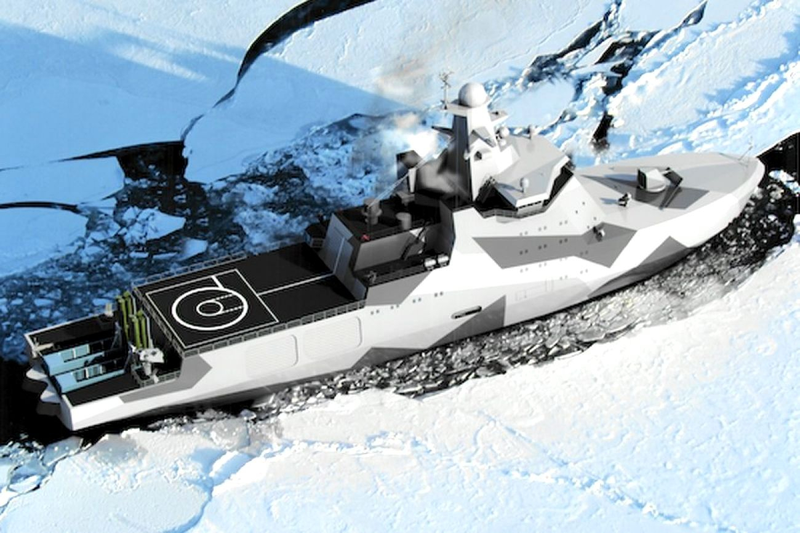 According to the commander of the naval fleet Admiral Vladimir Korolev of Russia, a patrol ship of the Arctic zone of project 23550 was specially designed by order of the fleet, taking into account the increased presence of the Russian Navy in the Arctic zone. This presence is a guarantee of the safety of the marine activities of our country in the Northern Sea Route zone, as well as in the polar regions. The admiral emphasized that this is not about any aggressive actions in the Arctic, but about the ability of the Russian fleet to eliminate any possible threats that may arise in this strategic area that is important for our country. The admiral also emphasized the fact that the new patrol ship will be the first military ship, which was purposefully built to solve various complex problems in the Arctic. The armament of the ship of project 23550 will vary for the solution of certain tasks (built on a modular basis). Of course, the main task of the new ships of this project will be to ensure the actions of groups and units in the Arctic seas. Along with this, the ship will be able to perform separate search and rescue functions and solve the tasks of escorting support vessels. This is its uniqueness.

Ctrl Enter
Noticed oshЫbku Highlight text and press. Ctrl + Enter
We are
Russian Navy will receive universal ships for the ArcticLaid the keel of the first Soviet-era icebreaker with a capacity of 25 megawatts
54 comments
Information
Dear reader, to leave comments on the publication, you must to register.