Commander of the working regiment 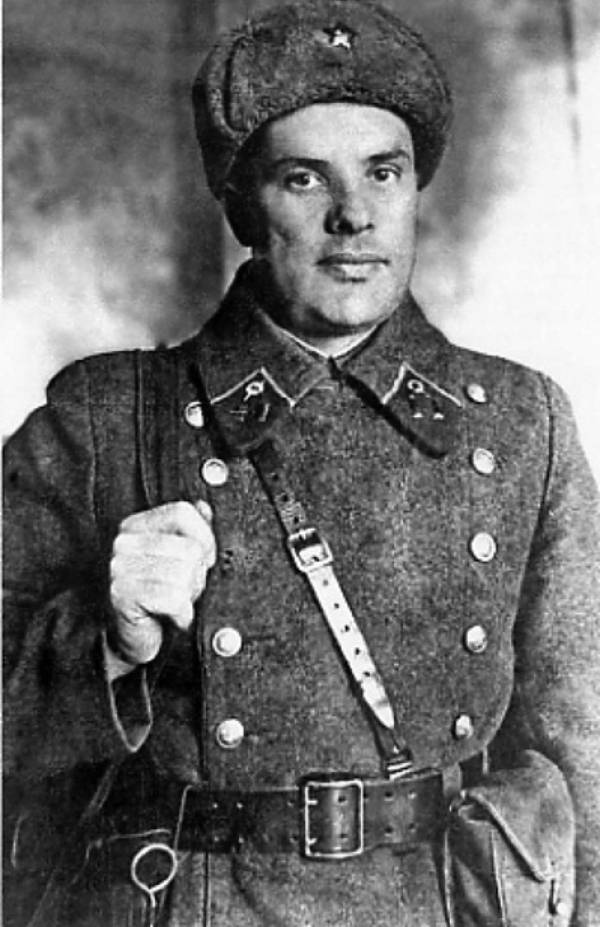 In September 2016, another name was added to the list of Heroes of the Russian Federation. He was Major General Anatoly Gorshkov, who was awarded the high rank posthumously. However, should not be looked for in recent the news mention of a successful special operation in which the general distinguished himself. Numerous exploits of this man are over 70 years old. The defense of Moscow, the leadership of the partisan movement, the rescue of the Yugoslav leader Josip Broz Tito, the fulfillment of a secret diplomatic mission - for each of these events, one could safely assign a Hero. But the circumstances were such that historical justice triumphed only decades later.

DAY FIRST COULD BE THE LAST

On October 3, 1941, the Germans took Oryol. From him to ours armory the capital - 180 kilometers. By the time the enemy approached Tula, only a small part of the regular troops were in the city. Under these conditions, on October 23, 1941, the city defense committee decided to form the Tula workers regiment, which was headed by 33-year-old state security captain Anatoly Gorshkov - the only military man in its composition.

The first drill review of the new military formation took place in the evening of October 26. In the ranks were hung with grenades, incendiary bottles, entwined with 900 machine-gun belts of workers, miners and employees, clutching various assorted rifles in their hands, collected in all factory storerooms and utility rooms - from lebel to three-line. And only two PPShs on the regiment, one - at Gorshkov.

In this composition, the workers' regiment, together with the NKVD regiment, took up defensive positions in the most dangerous direction — on Orlovskoye Highway.

The offensive began on October 30 at 7.00. In a decisive throw on Tula and further to Moscow, more than 300 were thrown tanks and 100 thousand armed to the teeth soldiers and officers of the Wehrmacht. However, all attacks, despite the frantic onslaught, were repelled. It came to hand-to-hand fights. Over the entire day of the battle, 31 tanks were shot down and many infantry destroyed. The Nazis only managed to make a dent for 300 - 400 meters in the line of defense of the working regiment, but the militia did not let them go further.

This was perhaps the most difficult and decisive day of defense. Drogni then the defenders of Tula - and it is not known how events would develop further. And the first day could be the last. But the workers' regiment under the command of Gorshkov, a handful of soldiers and commanders of the 260 division, a few calculations of anti-aircraft gunners, gunners and soldiers of the NKVD regiment blocked the enemy's way to Moscow. The whole burden of the first 30 battle of October, 1941, fell on them.

Thanks to the time won, reinforcements began to approach the city’s defenders. They began to accumulate forces not only for defense, but also for the offensive. 6 – 8 November was an offensive operation, in which, along with several infantry divisions and a tank brigade, workers also took an active part. From this period, the enemy was no longer able to capture the city of Russian gunsmiths and move further to Moscow.

At the end of November 1941, Captain Gorshkov surrendered the regiment to a new commander, Major Baranov, and returned to the NKVD Office for the Tula Region, where he organized and transferred guerrilla groups and reconnaissance and sabotage groups to the enemy’s rear.

The list of Heroes of the Soviet Union and Russia is replenished with another last name of a courageous warrior. 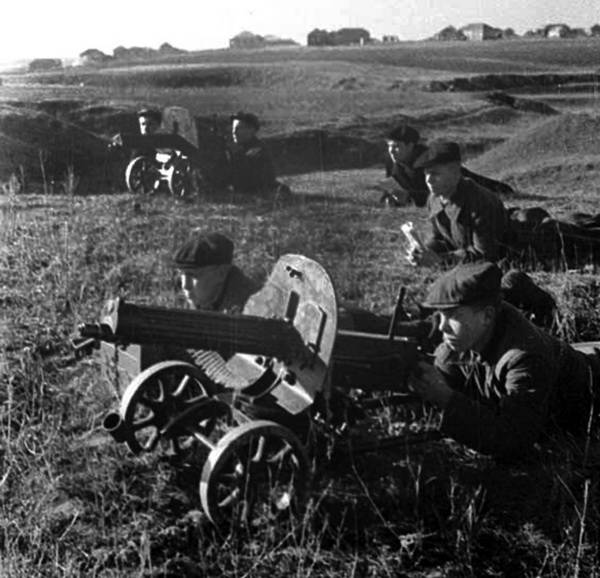 At the beginning of 1942, Anatoly Petrovich was appointed to the post of deputy chief of staff of the partisan movement of the Bryansk Front. He repeatedly flew to the rear of the enemy to directly lead major operations of the partisans, restore communications and unite the partisan detachments.

In his biography of that period there is another bright episode. They developed and successfully organized a unique, as they would call today, humanitarian operation to withdraw tens of thousands of civilians from their entourage: women, old people and children who were threatened with inevitable death for helping partisans.

A peculiar crown of Anatoly Petrovich’s partisan career was the parade of partisan glory, which took place in the liberated Eagle on September 19 1943, which was already received by Major General Gorshkov.

After the expulsion of the invaders from the USSR, the Pots in 1944 were again in the rear of the enemy - this time in the territory of Yugoslavia occupied by the fascists. He was appointed deputy chief of the Soviet military mission, which assisted the Yugoslav People’s Liberation Army (NOAJ) in the fight against the German fascist troops. This is a separate, little-known, but no less exciting page in the biography of the general.

Aware of the growing power of NOAJ, the Hitlerite command more than once tried to decapitate its leadership, led by Marshal Tito. The Nazis planned to inflict a sudden raid from the air, combining it with the onset of large ground forces, to seize the headquarters and Josip Broz Tito himself, a photo of which was given to each of the paratroopers commanded by Otto Skorzeny. They had a special task regarding the Soviet mission under the code name "Moscow": the Russians were outlawed, and the saboteurs were ordered to destroy them mercilessly.

An unequal fierce battle ensued. Broz Tito, along with Lieutenant-General Korneev, Major-General Gorshkov and other comrades in cave tunnels, cable slopes and mountain paths who accompanied him to the Soviet military mission, headed for the reserve command post. However, all the ways were cut by the enemy. The leadership of the mission insisted on a breakthrough by the combined forces, which ultimately led to success, and the command of the NOAJ led by Marshal Tito was saved.

In connection with the events of that period described in the biography of Anatoly Gorshkov, there are two little-known facts to the general public. For his Yugoslav mission, Major General Gorshkov became a knight of the Order of the Partisan Star of the I degree and was awarded the title of People’s Hero of Yugoslavia. And in 1964, he again had to secretly visit this Balkan country, where he met again with Josip Broz Tito, who trusted him. The purpose of the secret mission was to attempt to smooth out the contradictions that existed between countries that arose in the first post-war years.

From December 1944, Anatoly Petrovich worked in the Main Directorate of the NKVD of the USSR to combat banditry, then he was appointed Commissar of Internal Affairs of the Kabardian ASSR. From 1948 year - in the reserve of the Ministry of Internal Affairs of the USSR. For many years he worked on the construction of important objects of the defense complex of the country, led a great public work in the international commission of the Soviet Committee of War Veterans.

Objective evidence of Anatoly Gorshkov’s merit to the Fatherland is the Order of Lenin, the October Revolution, Kutuzov II, the Patriotic War, I, the Red Star, the Badge of Honor, three orders of the Red Banner and numerous medals.

At the beginning of September last year in the apartment of Lyudmila Anatolyevna Loktionova, daughter of Anatoly Petrovich, a telephone call rang. The caller asked whether Lyudmila Anatolyevna 8 of September could come to Tula without explaining the reasons for the invitation. On the appointed day, a car arrived, and with full honors the woman was taken to the Tula Suvorov Military School, which had just been built, where many veterans, military men, Suvorovs and guests gathered. But still the purpose of the trip was unknown, and the guest was guessing. And only when President of Russia Vladimir Putin presented her with the star of the Hero of Russia, with which her father was awarded, she understood everything.

The reader, of course, raises the question - why were such significant feats of Anatoly Gorshkov not marked with a high rank earlier? We will not speculate, especially since the hero himself has never spoken about this. It is much more important to know modern history, which preceded the signing of the decree of the President of Russia Vladimir Putin on conferring the title of Hero of the Russian Federation to Anatoly Petrovich Gorshkov.
In the life of every person there are events that can be called the moment of truth. For Major-General of the Reserve of the FSB of Russia Vladimir Lebedev, this event was the assignment of the title of Hero to Anatoly Gorshkov.

It all began like this. January 18 The 1977 of the Year in Tula Drama Theater was to host a ceremonial meeting dedicated to giving Tula the title of Hero City. Leonid Brezhnev, General Secretary of the Central Committee of the CPSU, arrived in the city of gunsmiths. Before heading to the presidium meeting, he asked:

- Are there any living heroes of the Soviet Union for Tula?

- And who will reward? - the general secretary asks again.

Vasily Zhavoronkov, who was the first secretary of the VKP (b) regional committee and chairman of the city defense committee during the defense days of Tula and Anatoly Gorshkov, the first commander of the Tula working regiment, was brought to him.

- Tomorrow and hand over! - said Brezhnev.

The witness of the conversation was a young operative Lebedev. However, on the night of January 19, the Secretary General’s decision changed, and the title of Hero of the Soviet Union was given only to Zhavoronkov, who certainly deserved it.

Thus began the long-term struggle for the restoration of historical justice against one of the eminent sons of the Fatherland. Already being the head of the UFSB of Russia in the Tula Region, Lebedev repeatedly went to various instances with a proposal to award the title of Hero of the Russian Federation to Anatoly Gorshkov. However, for various reasons this did not happen.

So the moment of truth has come. And the list of Heroes of the Soviet Union and Russia was replenished with one more name of a courageous warrior, a talented organizer and a remarkable person, together with his comrades who defended Moscow on the Tula frontiers.

Ctrl Enter
Noticed oshЫbku Highlight text and press. Ctrl + Enter
We are
Belgrade modelDiplomats of the People's Commissariat of Defense: on the eve and during the war
Military Reviewin Yandex News
Military Reviewin Google News
13 comments
Information
Dear reader, to leave comments on the publication, you must sign in.