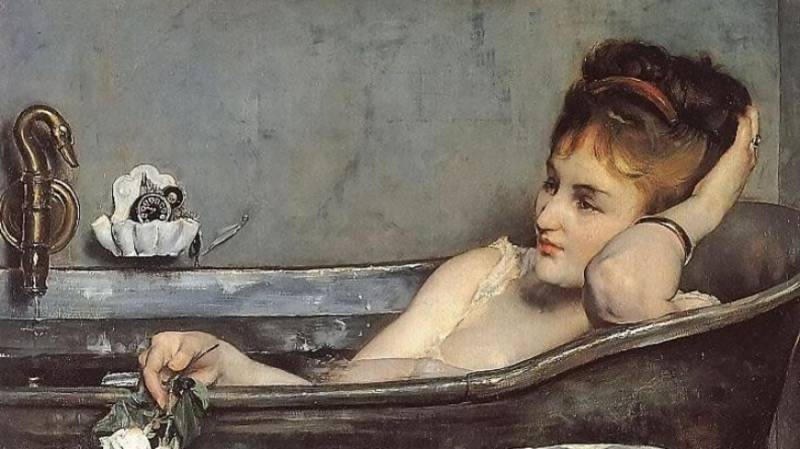 "It is necessary, it is necessary to wash in the mornings and evenings, and unclean chimney sweeps - shame and disgrace!". Since childhood, we have been taught that cleanliness is a guarantee of health. And in Russia, the bath was always held in high esteem, unlike in Europe, which for this reason was nicknamed unwashed. As you know, medieval Europeans neglected personal hygiene, and some were even proud of having washed only two or even once in their life.

People could wash in dirty water, often the whole family, and behind it the servants took turns washing in the same water. The Queen of Spain, Isabella of Castile, recognized that she had only washed twice in her entire life - at birth and on her wedding day. And Louis XIV also washed only two times in his life - and then on the advice of doctors. However, his washing was terrified and he didn’t do it. Russian ambassadors wrote that their majesty "stinks like a wild beast." And Pope Clement V died of dysentery.

Who are the "pearls of God"

The fact is that the Catholic Church forbade any ablutions except those that occur during baptism and before the wedding. It was believed that when immersed in hot water, the pores open through which water enters the body, which then will not find a way out. Thus, the body allegedly becomes vulnerable to infections. A bath - the heirs of the Roman term were considered the abode of debauchery. The church believed that a person should care more about the purity of the soul than the purity of the body. Ablution is often perceived as a medical procedure, after which people very often got sick.

It was also impossible to wash because it was possible to wash off the holy water, which I had touched at baptism. As a result, people did not wash for years, or even did not know the water at all. Lice were called "pearls of God" and considered a sign of holiness. 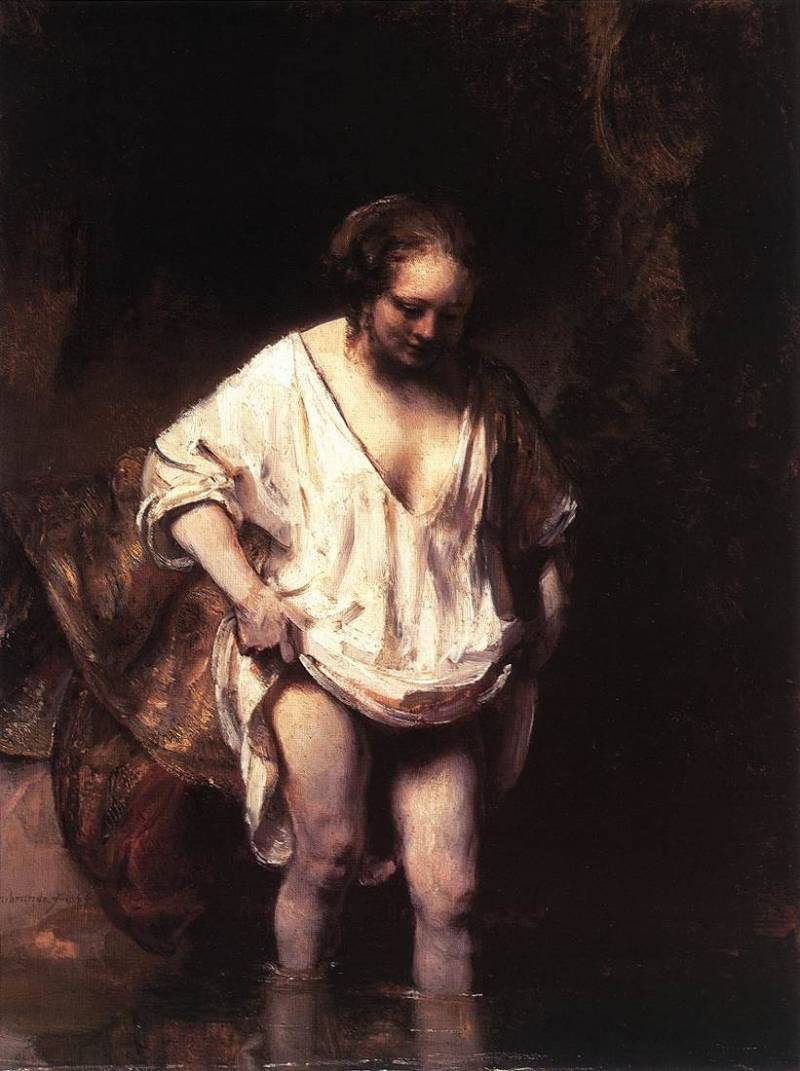 Rembrandt "A young woman bathing in a creek." 1654

Where did the phrase "money does not smell"

Unlike Europe, in Russia, the bath has always been held in high esteem. For the Slavs, the bath had not only hygienic, but also deep sacral meaning. The people believed that all sins would be washed away, therefore, once or even twice a week, they would go to the bathhouse. By the way, Dmitri the impostor did not like a bath, for which he was considered non-Russian. The Russians themselves in Europe were considered perverts because they went to the bath "too often."

But in ancient Rome, hygiene was lifted to unimaginable heights. Roman baths were visited daily. It was a separate culture. By the way, they housed public toilet rooms, where people communicated calmly. “Money does not smell!” - this catch phrase was uttered for the first time by the emperor Vespasian, when his son reproached him for imposing a tax on the toilets, while these places, in his opinion, should have remained free.

But what about Versailles? ..

But in Medieval Europe there were no toilets at all. Only the highest nobility. It is said that the French royal court periodically moved from castle to castle because there was literally nothing to breathe there. Lack of toilets absolutely no one confused. Even at Versailles there was not a single latrine place. The long corridors were covered with heavy curtains, behind which everybody was in need. It was then that the spirits gained the most popularity. Persistent aromas were designed to stifle the stench that came from human bodies.

Meanwhile, Louis XIV himself had a closet. As historians tell, he could sit on it and simultaneously receive guests. By the way, the first public toilet there appeared only in the XIX century. And it was intended only for men. In Russia, latrines appeared under Peter I.

According to the description of many guests of Paris, among whom was the great Leonardo da Vinci, there was a terrible stench on the streets. It got to the point that, in the absence of toilets, the chamber pot was easily poured out of the window directly onto the street. It was then that wide-brimmed hats appeared, which were not only a tribute to fashion, but also a common necessity. Since, due to the lack of sewage, the contents of the night pots poured directly from the windows. At the end of the 13th century, a law was passed in Paris, which read: “When pouring out a chamber pot from a window, you need to shout:“ Caution! Water!".

In the XIII century appeared underwear. This event has further strengthened the consciousness that you can and not wash. The clothes were very expensive, so it was quite expensive to wash them, but it was much easier to wash the underwear. Know, by the way wore silk underwear. The reason for its popularity is simple. There were no parasites in slippery matter, simply because they had nothing to cling to. 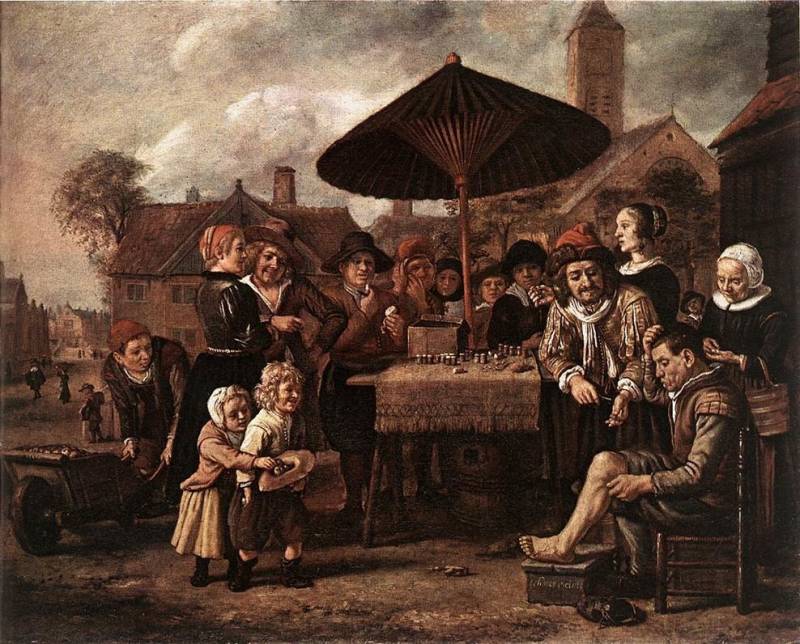 "For from childhood they did not enter the water"

In medieval Europe, clean, healthy teeth were considered a sign of low origin. Noble ladies were proud of bad teeth. Representatives of the nobility, who by nature got healthy white teeth, usually embarrassed them and tried to smile less often so as not to demonstrate their “shame”.

People are so unaccustomed to water procedures that Dr. F.E. Biltsu in the popular textbook of medicine of the late XIX century had to persuade people to wash. “There are people who, in truth, do not dare to swim in a river or in a bath, since they have never entered the water since childhood. This fear is groundless, - wrote Bilz in the book “New Natural Treatment”. “After the fifth or sixth bath you can get used to this ...”.

Ctrl Enter
Noticed oshЫbku Highlight text and press. Ctrl + Enter
We are
Chernobyl notebook. Part of 3Father told
53 comments
Information
Dear reader, to leave comments on the publication, you must to register.