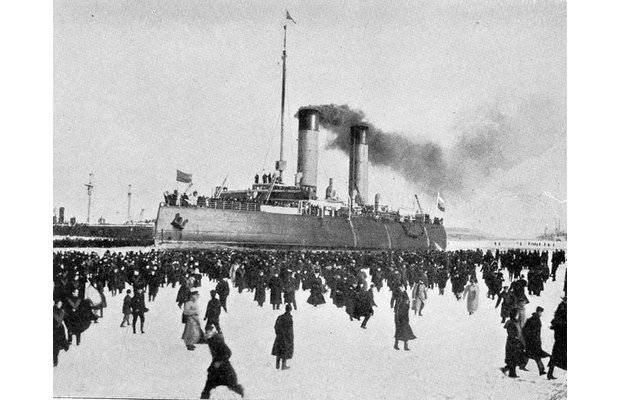 The launch of the world's largest icebreaker "Yermak", named after the legendary ataman Yermak Timofeevich, was preceded by a great job, done, first of all, by Vice-Admiral Stepan Makarov.

He submitted a note to the Maritime Ministry with a program for the development of the Arctic Ocean using icebreakers as early as January 1897, and was refused. Hoping for the support of famous geographers and hydrographs, he made a presentation in the Geographical Society, also to no avail.

Unwilling to give up, Makarov made a report at the Academy of Sciences, and then he was expected to succeed - the loud approval of the academic meeting and even the publication of the report in a separate brochure.

Academician Peter Semenov-Tien-Shansky supported him, and Dmitri Mendeleev wrote to Makarov: “In my opinion, your thought is brilliant and sooner or later will inevitably be fulfilled and developed into a matter of great importance - not only scientific and geographical, but also living practice” .

The support helped, and in November 1897, Finance Minister Sergei Witte reported to Nicholas II about allocating 3 million rubles for the construction of the first icebreaker. The project of the ship was developed by British engineers with the participation of Makarov. As the witnesses joked, Makarov "swept off the beard" all the most important components of the ship - so carefully he delved into the drawings and details of the construction of the icebreaker. 17 (29) October 1898, the launch of the ship on the water.

In February 1899, the icebreaker Yermak set off on its first voyage from the English Newcastle slipways to Kronstadt. 3 of March at the "Yermak" Russian flag was raised, and 4 of March, breaking the ice ridges in the Gulf of Finland, the icebreaker arrived in the port of Kronstadt. The entire population of the city came to the pier to meet the ship.

The local newspaper Kotlin wrote about this event: "In each of those present, there was an involuntary feeling of pride for us Russians."

Already in the first year of operation, Yermak took part in an operation to rescue fishermen who were carried away on an ice floe to the open sea and who had run into the rocks at the island of Gogland, the battleship Admiral General Apraksin. During the Russo-Japanese War, he opened the way for Rear Admiral Nikolai Nebogatov’s squadron to the Far East, withdrawing it from the port of Lubawa.

During the First World War, the icebreaker carried out ice pilotage of ships in the Gulf of Finland. In 1918, "Ermak" saved the combat core of the Baltic fleet, navigating ships in winter under severe ice conditions from Revel to Helsingfors, and in the spring to Kronstadt.

During World War II, in October 1941, he took part in the evacuation of the Soviet naval base of the Hanko peninsula and the islands of the Gulf of Finland, escorted ships to bombard enemy positions, and took submarines to combat positions. After the war, the icebreaker returned to peaceful life and was in operation until the 1963 year.

It is important that the strong and powerful "Yermak" served the cause of creation, protection and peaceful construction in our Fatherland.