Russian military advisers are training the fighters of the Syrian army

November 10 2017
24
Military experts from Russia conduct fire training sessions with Syrian army soldiers at the training ground near Damascus. Arriving at the ground servicemen undergo a course of a young soldier. They reinforce in practice the knowledge that they gained in theoretical classes in classes.

Syrian fighters who have undergone extensive training at the training center in Latakia will soon go to the combat zone - to the south-east of the country. Over the past month, more than 600 graduates of the training center went to war with terrorists
- A Russian military adviser told reporters. 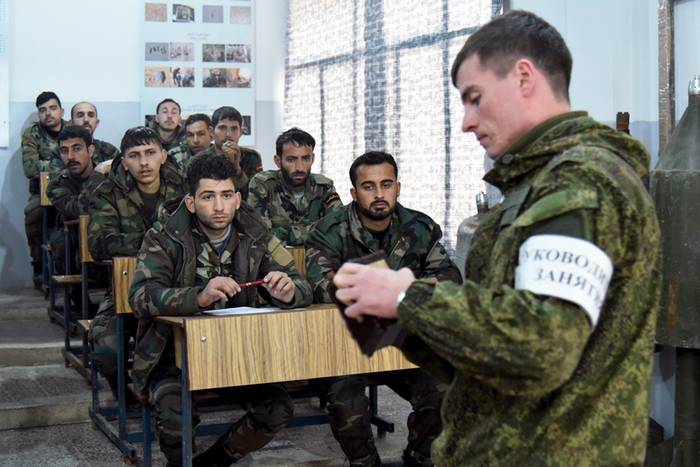 Today at this test site advisers of the Armed Forces of the Russian Federation held a fire training session. The shooting was [conducted] from an 120-mm mortar, automatic mounted grenade launcher and anti-tank grenade launcher. At the moment, the Syrian army soldiers coped with the task, and all the tasks were completed
- he said.

They explain everything in an intelligible way, there are no questions. When we go out on shooting, we know what to do and how. And now we rush into battle
- he noted, passes RIA News

Ctrl Enter
Noticed oshЫbku Highlight text and press. Ctrl + Enter
We are
Reports from the militia of New Russia for 10 September 2014 of the yearCuban "Black Wasps"
Military Reviewin Yandex News
Military Reviewin Google News
24 comments
Information
Dear reader, to leave comments on the publication, you must sign in.