Are there limits to the influence of Russia?

November 13 2017
20
Dimitar Bechev, a well-known political expert, devoted his new analytical article to the growing influence of Russia in the Balkans. In his opinion, the growing military power of Russia promises "consequences" for the security system of individual members of the NATO alliance and the entire alliance. 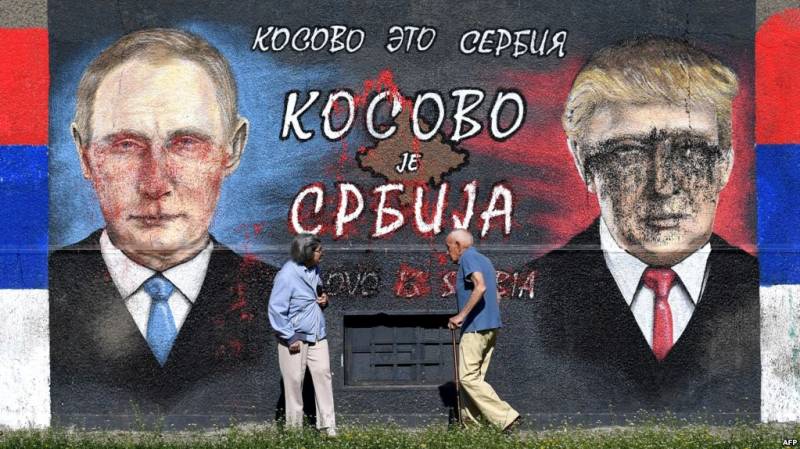 Dimitar Bechev is a researcher at the Center for Slavic, Eurasian, and Eastern European Studies at the University of North Carolina and a freelancer at the Atlantic Council. In his new article for "The American Interest" He notes that in the games that Russia leads, it is rather building a strategy on the use of opportunities, that is, it is an opportunist, rather than acting as a puppeteer, pulling puppet strings. At the same time, if we touch South-Eastern Europe, it should be noted: Moscow’s increased military power means “far-reaching consequences” for the security of NATO members, whose borders pass through the Black Sea, as well as for all of NATO.

Russia's influence in the Balkans is “real” and “easy to observe.” Both before and after the Ukrainian crisis, this influence affects the region in a variety of ways. Russian oil and gas companies, Gazprom, Gazprom Neft and LUKoil still play a huge role in local energy markets, despite the local “resistance” they have, and the tightening of European legislation aimed at encouraging competition and diversifying supplies. The “cult of Vladimir Putin,” the author notes, and solemn statements about the “rebirth of Russia on the world stage” are regularly made headlines in the press.

Russia is putting pressure on both Europe and America - on two guarantors of the order of security in the region. Intense political competition encompasses a vast arena. Despite hopes of relieving tensions and even some kind of “grand deal” with Russia, which for some reason are “advertised” by politicians on both sides of the Atlantic, the upcoming political contest is not expected to end. Here it is important to avoid “lazy thinking”, the author points out, and it is important to discern the perspectives of the “Russian challenge” and clarify its limits.

There is no return to the cold war, says Bechev. In Southeastern Europe, there are neither blocs nor any alliances that would oppose each other. And this already means dissimilarity with the recent Soviet past. Moreover, Russia has neither permanent allies, nor a coordinated ideology that would be supported abroad and which could be “exported”. Moscow is not able to create a basis for economic integration, for example, to expand the Eurasian Economic Union in the Balkans by joining Serbia, Republika Srpska, Macedonia or anyone else. Even the “best friends” of Moscow in the region are economically not towards Moscow, but towards the European Union, recalls the analyst. These same "friends" continue to pursue "positive relations with NATO and the United States," he points out.

Russia, in turn, is improving its fighting skills in this arena, without, however, trying to “establish its hegemony,” the expert believes. A certain very “ambitious” enterprise would prove to be prohibitively expensive for Moscow. The Kremlin would not have received "returns" from this kind of "investment."

Of course, there is some similarity with the cold war. And yet “we are not witnessing the“ Back to the Future ”scenario, the analyst believes. Returns to the era of geopolitics "big game" no. Even in the 19th and the beginning of the 20th century, Russia had a much greater influence in the Balkans in comparison with the present day thanks to its constant military intervention and the very structure of Europe at that time. But in those years, Russia "by no means" was an important economic factor. In our days, the author continues, Russia, on the contrary, uses a “much more efficient instrument” in the form of energy enterprises and in the form of financial investments in the region. Whether it is the South Stream gas pipeline or sanctions against Turkey in 2015, the economy plays a central role in Russia's relations with South-Eastern Europe.

A broader context deserves special attention here: “an unprecedented degree of interdependence and border permeability in Europe after the 1989 of the year”. Tighter connections were formed between societies, financial institutions, firms, government agencies, the media, and so on, not to mention the Internet, which greatly contributed to the development of Russia's ability to influence events in the context of "soft power."

In the Balkans, Russia, according to the expert, has the following goal: “to undermine and destroy existing institutions and rules introduced by the West”. Bechev also emphasizes the “fact”: Russia “does not act alone.” She always had "supporters and fellow travelers." They "cooperate with Russia, promoting their own political and economic interests." It is noteworthy that some of these Russian partners were previously considered pro-Western. Some examples: Milorad Dodik from Republika Srpska, Turkish President Tayyip Erdogan and Nikola Gruevsky in Macedonia. Others, however, moved in the opposite direction, rejecting Russia and integrating more fully with the West (Milo Zhukanovich in Montenegro). Russia's policy, therefore, can be based only on opportunities (be opportunistic).

The “footprint” of Russia in Southeastern Europe, which increased dramatically in the 2000s, became more noticeable only recently. This happened "thanks to a confrontational turn in relations between Moscow and the West." This is due to many factors, including the "desire of Putin's regime for internal legitimacy before the fact of a stagnant economy and a reduction in public confidence in the system." In addition, the Kremlin seeks to “uphold Russian interests in a growing multipolar, but uncertain world,” characterized by the “chronic indisposition” of the European Union. Because of the "mechanics of power politics" or because of the "internal factors", Russia is even ready to "challenge America and its allies." Moscow is eager to become an "international compiler" of the agenda, and not those who dance to someone else's tune. Fears of Western plots of “color revolutions” and “Maidan” within Russia itself, writes Bechev, form “foreign policy thinking of Putin and his inner circle.”

Moscow operates in other regions. However, its "military intervention in Syria" has not yet received recognition in the Middle East. In the United States, the question of Russia's alleged interference in elections and cyber espionage is still acute.

As for post-communist Eastern and Central Europe, including the former Yugoslavia, it is “an obvious goal” for Putin. The same with Turkey: Moscow has the means to take advantage of Ankara, destroying its relations with the United States and the European Union. Western sanctions and a sharp drop in oil prices weakened the Kremlin, but he still knows how to play influence games and how to exploit weaknesses and opportunities on the periphery of Europe.

And it cannot be said that the Kremlin is seizing the opportunity ineptly. Across Europe, there are enough people who want to join his game: they want to enlist the support of Russia to achieve their goals. This behavior is “not unique to Southeast Europe, where historical ties with Russia, admittedly, play a role. ” Therefore, Putin "has his followers" in Hungary, the Czech Republic, Italy, Austria and, not least, in Germany. Regardless of the political climate, there will always be players who want to do business with Russia, Bechev concludes.

Can the current Russia "undermine the inside" of the European Union, starting the game with "relatively vulnerable south-eastern states"? Probably not. First, the Kremlin does not seem to have a consistent model that is “exported” outside the post-Soviet space. Neither the “managed democracy” nor the “sovereign democracy” of the first two periods of Putin’s rule, nor the later theses on conservative values ​​and religion, nor the statement about Russia as a “unique civilization opposing global liberalism” does not work These ideas have many supporters throughout the European Union, from Belgrade to Ankara, from Sofia to Budapest. All these “dysfunctional” democracies and retreats to authoritarian politics are “home-grown diseases”, and not the results of the “sinister Muscovite” activities, D. Bechev ironically.

Nevertheless, “Putinization” is a threat, he said. Therefore, you need to clearly find out who the "real Putinizers." More importantly, the following: Russia, apparently, does not have economic resources for expensive “ideological crusades”. Yes, the European Union may be depressed when faced with a series of existential crises, but it still has “charm” thanks to its market, significant financial transfers and, to a lesser extent, the strength of its fundamentals.

The only question is that for the European Union, where it has always been difficult for Member States to “speak with one voice” in relation to Russia, and for the United States it is difficult to reconcile the “right balance” between the containment of Moscow and its involvement in its orbit.

In the meantime, Southeastern Europe will sail "over the dark waters" of this political contest. For the most part, the expert believes, the states of the region will still bow to the West, but will keep the doors open for Putin. The owner of the Kremlin "would be stupid" not to use this situation. However, the tango dance together.

The analyst, we note, highlighted not only the economic weakness of Russia, which prevents it from “reigning” in any region, and even in the world, but also the weakness of the EU and the USA: they lack the “single voice” they would talk to Moscow . That is why, using the political weakness of the West, the “sinister Muscovite” is advancing on the world stage, and Russia's influence is growing every year. No wonder Bechev recognizes the threat of "Putinization".

Observed and commented on Oleg Chuvakin
- especially for topwar.ru
Ctrl Enter
Noticed oshЫbku Highlight text and press. Ctrl + Enter
We are
Situational analysis of the death of the MH17 flight (Malaysian Boeing 777), made on the basis of engineering analysis from 15.08.2014Strangulation: the context, conduct and consequences of the American naval blockade of China
20 comments
Information
Dear reader, to leave comments on the publication, you must to register.