The first batch of helicopters Mi-XNUMHUB transferred to the troops

November 10 2017
14
Press office the main defense department reports that the first shipments of the newest combat helicopter Mi-28UB to the Russian Aerospace Forces have been made. The report said that the representatives of the military department received the first batch of these rotary-wing machines at the manufacturer in Rostov-on-Don. 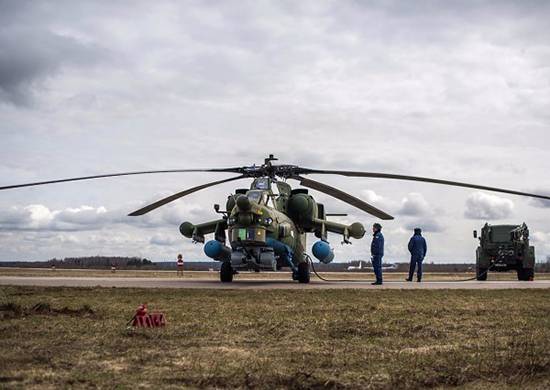 From the material of the press service of the Russian Ministry of Defense:
During the reception, representatives of engineeringaviation services and flight crews carried out control checks of the operation of aircraft in various modes on the ground and in the air.

It is reported that in the coming days, a pair of Mi-28UB helicopters will be deployed in the Tver region. There is a center for the combat use and retraining of the flight personnel of army aviation.

Mi-28UB helicopters are delivered to the troops on the basis of a contract previously concluded by the main defense department of the country and Russian Helicopters JSC. The government contract was signed at the time by the Deputy Minister of Defense Yuri Borisov and the general director of the company Alexander Mikheev.

Mi-28UB has dual controls, improved ergonomic characteristics of the cockpit of the crew commander and pilot-operator. This scheme allows us to accelerate the retraining of pilots of army aviation while maintaining the combat potential of the machine.