November 10 2017
57
The long-range air-to-air missile K-37 / Р-37, known today as RVV-BD, was created by experts of the Vimpel State Machine-Building Design Bureau named after I.I. Toropov, who specializes in the development of various aviation weapons. Nowadays, this design bureau is part of the Tactical Missiles Corporation. The RVV-BD missile was officially put into service in the 2014 year and today it has the maximum launch range among all air-to-air guided missiles in the world.


At one time, one of the outstanding achievements of the Vympel design team was the creation of the first Russian long-range air-to-air guided missile P-33. The rocket was specially designed for arming the MiG-31 interceptor fighter. It was adopted by the Soviet Army 6 in May 1981 of the year and is used in the armed forces of our country to this day, helping to strengthen the defense capability of the state and participating in combat duty to protect the airspace of the Russian Federation. The P-33 rocket (K-33, according to the NATO AA-9 Amos codification) ensures the defeat of various air targets flying at speeds up to 3 000 km / h at the maximum distance to 160 km.

Most of the constructive technical solutions implemented in the P-33 rocket were fulfilled at the level of inventions and strings allowing for the modification of the product in the future. The design bureau employees actively used the potential laid down in the long-range missile design, which allows the creation of new long-range air-to-air missiles for various aircraft carriers. New samples of such weapons equipped with more advanced electronic digital equipment and propulsion systems, modern battery-powered power supplies and powerful combat units. One of the new missiles of the Vympel design bureau was the RVV-BD rocket, which was officially put into service in 2014 and sent to mass production. The rocket became a worthy successor to the Р-33, inheriting from it not only some elements of the external appearance and size, but also the best qualities. The new rocket fits well into its niche and can be used on all types of MiG-31 interceptor fighter (B, BS, BM), as well as other modern MiG and Su fighters. 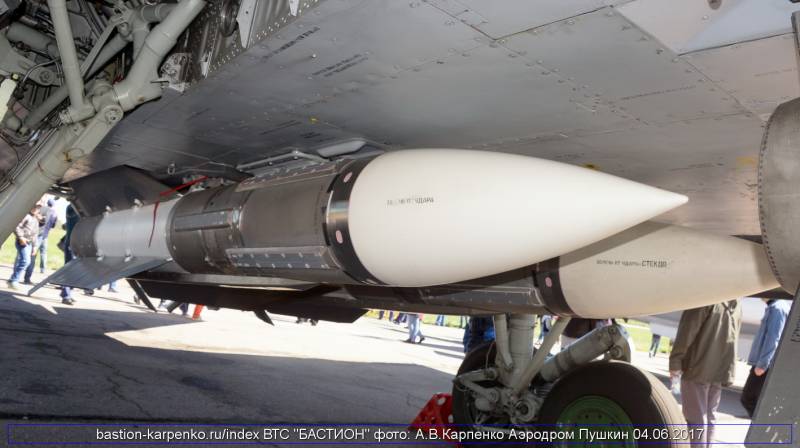 Rocket R-33
Work on the new rocket started at the beginning of the 1980-ies after the adoption of the P-33 rocket. The development of a more sophisticated rocket similar to the P-33 (K-33) rocket for arming the MiG-31M interceptor fighter was launched by Vimpel 8 XB on April 1983 after the appearance of the corresponding decree of the USSR Council of Ministers. In the same year, the conceptual design of the rocket, which received the designation K-37, was protected. The "K" index in the name means the weapon system that is under development. The tests of the rocket started in the 1988 year, when 10 autonomous ballistic missile launches without a control system were performed. In 1989, the 4 launch was also performed, software missiles without a guidance system took part in the tests — they flew under the control of an autopilot according to a given program. In the same year, tests took place on the long-range missile with a guidance system, a total 2 launch.

For the first time, a new development of domestic engineers was presented in public as part of the Minsk show of the new aviation equipment, which was held in March 1992. Missiles were demonstrated on the ventral suspension of the MiG-31M interceptors (6 missiles on AKU-610 holders under the aircraft fuselage). Even then, it was noted that the missile adopted many of the features of its predecessor - the R-33 / K-33 missile. In April 1994, Russian President Boris Nikolayevich Yeltsin congratulated the creators of the new missile on the successful destruction of an air target at a record distance of 304 km.

Further tests of the rocket continued until the 1997 year. This year, most likely due to the violation of cooperation with Ukrainian enterprises that were involved in the creation of guidance systems for the new rocket, it was decided to develop a guidance system using exclusively Russian components. Such a situation imposed on the difficult economic situation of the country significantly slowed down the work on creating a new rocket, which in the process of development managed to transform into a RVV-BD rocket, which is almost the complete analog of the P-37 rocket. According to the NATO codification, the RVV-BD missile is known as AA-13 ARROW (Strela). As an export version, it was first demonstrated at the MAKS-2011 air show. 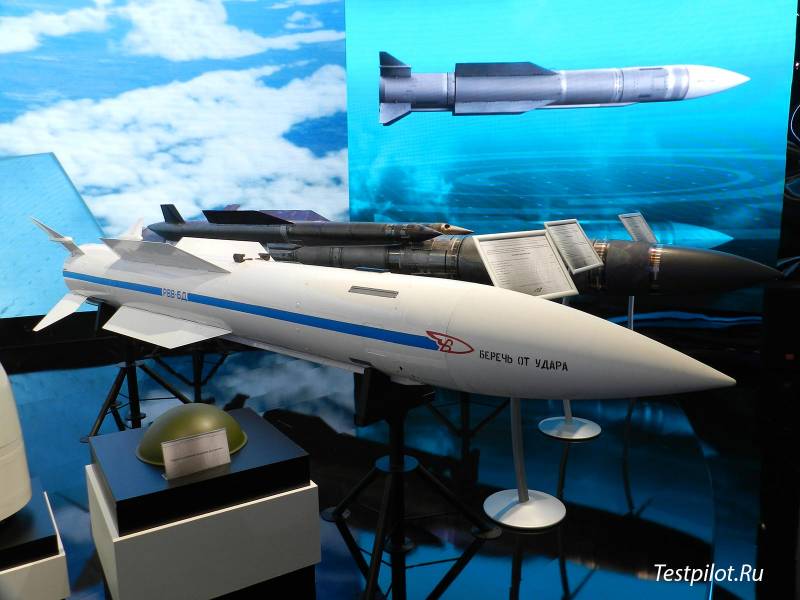 According to the developer, the RVV-BD rocket is a long-range air-to-air guided missile. It is designed to hit various air targets (aircraft, cruise missile, helicopter) at any time of the day, at all angles, including in the conditions of electronic countermeasures (REB) from the enemy, against the backdrop of the earth and water surfaces, including multichannel firing on a shot-and-forget target. The announced launch range for the export version is 200 km, the warhead weight is 60 kg.

The RVV-BD missile target guidance system is inertial with radio correction and active radar homing, which is activated in the final part of the rocket’s flight path. As the propulsion system used dual-mode solid fuel engine. Radar active proximity sensors and contact sensors of the target are used as an explosive device. The warhead of the missile is high-explosive. The suspension of the RVV-BD rocket on the carrier aircraft is carried out with the aid of an aircraft ejection device; two models, AKU-410-1 or AKU-620, are used.

Rocket K-37 was performed according to the normal aerodynamic configuration with a wing of small elongation, but with a large chord. The rocket stabilizers are in the folded position until launch. Compared to the K-37, the RVV-BD rocket is smaller in size, in particular, a shortened head compartment with a radio transparent fairing. The length of the rocket has become less by 140 mm. At the same time, when placed on an aircraft carrier, the RVV-BD guided missile, in contrast to the K-37, consists only of the upper stabilizer wheels. 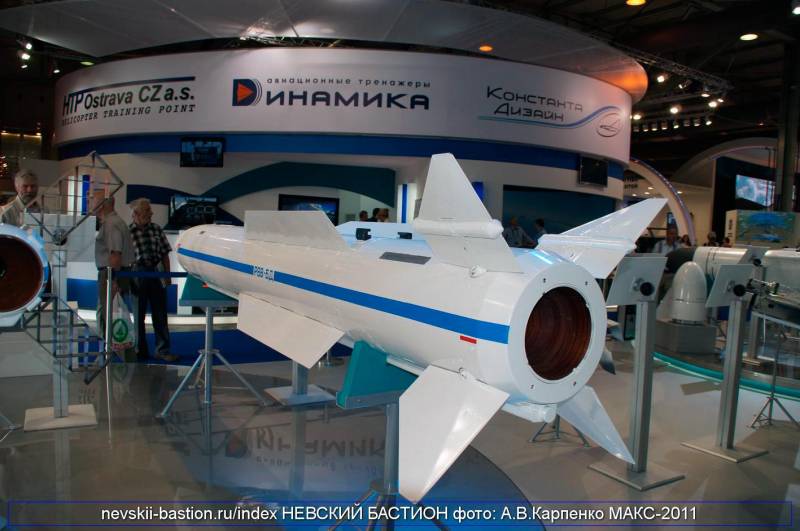 The designated service life of the RVV-BD rocket is 8 years. The assigned resource for making an unlimited number of take-offs from the runways with a concrete coating is 50 flight hours (20 take-offs from metal and unpaved runways). The time of continuous operation of the equipment of the rocket in flight while under the aircraft carrier is 3 hours.

According to experts, RVV-BD missiles are intended primarily for hitting enemy long-range cruise missiles, as well as their direct carrier aircraft, at long range. Due to the design features that are required to ensure a huge missile flight range, it has less maneuverability capabilities than short-range and medium-range missiles. At the same time, its maneuverability is significantly better than that of its predecessor - the P-33 rocket (overload of the targets hit - 4g). The use of missiles RVV-DB can at least significantly disorganize the enemy, disrupt the military formations of aviation. The use of such missiles significantly expands the capabilities of the Russian military aviation, allowing you to successfully hit enemy cruise missiles from a long distance, as well as providing the possibility of hitting DRLO aircraft and air command posts located at a considerable distance from the front line and covered by enemy fighters.

It is clear that the effective range of such a missile at targets of the fighter class is significantly lower than the stated maximum values, but in any case it significantly exceeds the range of existing medium-range air-to-air missiles that exist today. The range of capture of the active homing head of the RVV-BD missile targets with an effective reflective surface 5 m 2 is estimated at 40 km. 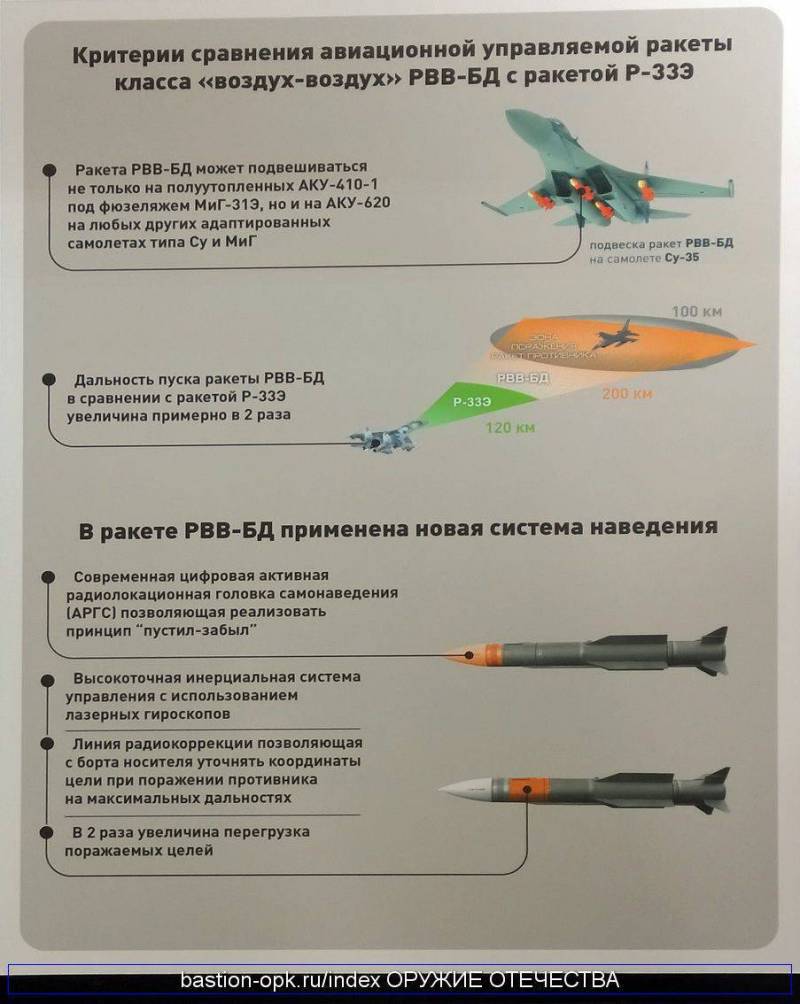