"Persian check" pulled out: Abu Kemal almost under the control of the CAA. Washington tightens the "game" 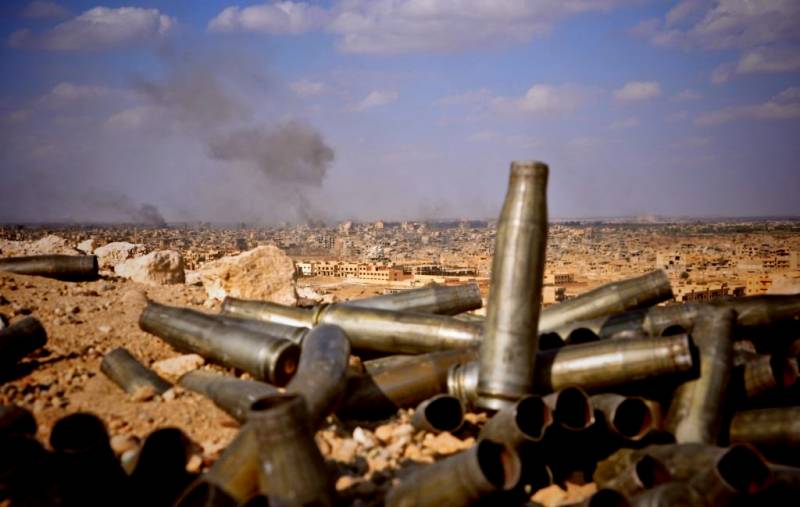 The development of a large-scale offensive by the Syrian Arab army to the last remaining stronghold of the paramilitary wing of ISIL (banned in the Russian Federation), the city of Abu Kemal, reached a "turning point": after all, a day ago anonymous war correspondents handed over to Russian news agencies tactically important news that the city is partially taken under fire control. Initially, it was assumed that the talk was about the entry of a strategically important city into the range of artillery (as a last resort mortar) batteries of the Syrian Arab Army, as well as supporting it with Hezbollah batteries and Iraqi militias Hashd al-Shaabi, advancing along the Iraqi border with Hamim side and T2 station. Nevertheless, thanks to the powerful air support from the Russian Navy and the Russian Aerospace Forces, the friendly units made a much more significant throw, reaching the western approaches to Abu-Kemal.

For example, if you look at a regularly updated western tactical online map of the Syrian theater of operations (syria.liveuamap.com), you can notice that the front line between the CAA and ISIS is just 1500 — 2000 m from Abu Kemal: advanced pseudo-haliphat strong points deployed in the vicinity of the city are already easily shot through with anti-tank missile systems 82-mm mortar and small-arms weapons. This says only one thing: in the next couple of days Abu-Kemal will be cleaned of the terrorist organization, and the tactical “wing” of the IG, located on the west bank of the Euphrates, will be in a tactical boiler bounded by T-2 station, Euphrates and Makhkan. More than 3 weeks of the offensive “throw” of the CAA still strengthened us in the opinion that the channels established by the US SDF and MTR did not bring them any results in advancing in the direction of Abu Kemal: the front line between Kurdish units and the IG, as before takes place in the area of ​​Kahara. It is also known that to assault the positions of terrorists on the southern approaches to the city, Lebanese units of Hezbollah united with the Iraqi groups Harakat Nudjaba and Kataib Hezbollah in the area of ​​the Iraqi border town of Wadi Malihah.

As a result, the cunning plan of the US Armed Forces command in Syria to establish strategic control over the southern borders of the ATS was completely failed: the possibility of breaking through the tactical "corridor" from Abu Kemal to the At-Tanf military base, while simultaneously taking control of the Syrian-Iraqi and Syrian-Jordanian border, already excluded. The ground “corridor” for the interaction of the Lebanese units of Hezbollah and the IRGC with Iraqi militia was not just preserved, but significantly expanded (from 70 to 160 km, from the territories controlled by At-Tanf to the channel of the Euphrates), which allows to exclude the possible attack of Kurdish formations supported by the US. Consequently, Moscow, Damascus and Tehran will be able to dictate their conditions to the West on the final redistribution of territory on the entire west bank of the Euphrates, up to the Jebel Ansari mountain ranges. Under the Washington remains only the eastern coast of the Euphrates, including the northern territories of Syria, controlled by the "Syrian democratic forces." In other words, the Western coalition receives only rich deposits of hydrocarbons in the form of Al-Amar oil fields, as well as the highly controversial territory of Syrian Kurdistan, which under favorable geostrategic circumstances may be subject to a general offensive from the armed forces of Turkey and / or Syria.

Moscow, on the contrary, retains control over the Khmeimim air base and the logistics support point of the Navy Tartus on the east coast of the Mediterranean Sea for many years. This will enable diesel-electric submarines of the Black Sea Fleet of Russia, as well as MAPL North fleetoperating in the Mediterranean Sea, replenishment of ammunition in the course of possible conflicts in the Near-Asian region is almost unhindered; at the same time, there will be no need for constant passage through the Bosphorus and Dardanelles. Equally important, our submarines and surface warships will be able to use the “A2 / AD” aerospace zone, established by the S-300B4 / S-400 divisions right up to the central part of Cyprus, to evade anti-submarine aviation NATO Naval Forces: we have a kind of security zone over the Eastern Mediterranean.

The Islamic Republic of Iran also has a large enough sum, which has the opportunity to build a developed military-industrial infrastructure in Syria, as well as to deploy all the necessary electronic intelligence equipment to monitor the movements of the AOI. Numerous missile brigades of operational-tactical missile systems can also be placed here to maintain a tighter conditional fire control of Israel with the use of less expensive short-range ballistic missiles.

However, as you already understood, the above-described alignment does not suit the Jewish masonic lodges of Washington, London and Brussels, as well as the leadership of Israel. For this reason, the “Big Game” in the South Asian region will be continued, but not in the borders of the Syrian theater of operations alone, but with the coverage of the entire Arabian Peninsula and the Persian Gulf. A striking proof of this is the situation with the accusations that official Riyadh and Washington recently put forward against Tehran. We are talking about Iran’s accusations of supplying the Ansar Allah Yemeni People’s Liberation Movement (consisting mainly of Tehran-supported Shiite Zeidites) operational tactical ballistic missiles with a range from 500 to 1000 km, with which the rebels have the ability to strike at numerous support points. the points of NE of Saudi Arabia. The last attempt of such a blow was made on November 4 2017 of the International Airport of Riyadh, located more than 750 km from the territory controlled by the Huthits.

Used ballistic missile "Burqan-2H". Naturally, the choice of an international “air port” in the vicinity of Riyadh cannot be considered a fully adequate decision of the command of the Ansar Allah missile units, because the initiation of a heavy high-explosive warhead could lead to the death of hundreds of innocent people, who arrive in Saudi Arabia or leave it. Obviously, a single OTBR was easily destroyed by the ERINT interceptor missile of the Patriot PAC-3 anti-missile system, but imagine what would have happened in the event of a massive missile strike ... No comment.

The infrastructure of the King Faisal naval base located off the coast of the Red Sea, in particular, its runway, 3250 meters long, could be a much more adequate choice of Yemeni missilemen for an attack. . In particular, almost every massive missile and air strike of the “Arabian coalition” falls on civilian targets in Yemen, which leads to dozens or even hundreds of deaths. Despite the fact that the numerous Elbrus and Dots hussite rocket attacks on Arabian military facilities carried out over the last 3 of the year did not cause Tehran to be accused of providing missile weapons and OTB drawings, by the wonderful coincidence of circumstances it caused crazy resonance, and the ensuing anti-Iranian rhetoric in both Riyadh and Washington. Obviously, this reaction is not accidental, but depends on the state of affairs of Washington and pro-American forces in matters of domination in the Syrian theater, and here things are very bad.

As a result, the Pentagon, together with the defense structures of Israel and Saudi Arabia, in the foreseeable future will try to maximize the ambitions of Iran and Russia both in the Middle East and in the whole of Front Asia. It is well known that both Hel Haavir and the Saudi Air Force have the most numerous tactical fleets in the region, represented mainly by 4 + / ++ predominantly multi-purpose strike fighters from recent times (5) supplied by the Israeli Air Force F-35I "Adir" ). The total number of serviceable machines exceeds 750 - 800 machines, among which the most advanced are F-15SA, F-15I, F-16I, EF-2000 "Typhoon", F-35I, etc. These machines are capable of using a rather formidable high-precision weapon of the 21st century — ultra-sized planning “smart” bombs “Spice-250 / 1000 and 2000” that have an effective dispersion surface ranging from 0,01 to 0,07 м2; Standard subtle tactical RCs of the JASSM-ER family can also be used. The massive use of this weapon can noticeably undermine the defensive potential of even the dense and network-centered, adapted air defense of Iran. However, neither the AUG of the United States Naval Forces, nor the Israeli Air Force or the SA will attempt direct military aggression against Iran, despite the type and objectives of the ballistic missiles launched by the Hussites.

The fact is that “Kuzkin's mother”, which Tehran will certainly show to the “Arab coalition”, the Jewish state and the command of the US armed forces will deprive all of the above “players” (from the UAE to Kuwait) of the military infrastructure and on the Persian Gulf coast, in the depths of the Arabian peninsulas and even on the Mediterranean coast. Hundreds of units of medium-range ballistic missiles Qadr, Shahab and Sajil will overcome any conceivable and inconceivable missile defense system based on Arrow-2 / 3, Patriot PAC-3 and THAAD. Washington will instantly lose the AN / FPS-132 Block V missile attack warning system being built by the radar, which is designed to reduce the strike capabilities of the Strategic Missile Forces of Russia and China.

It is worth noting that this station is being built for the needs of the US global national missile defense system under the guise of the 1,1 billionth Qatari-American contract, supposedly intended to control aerospace over the Islamic Republic of Iran. At the same time, even the layman knows that the Iranian Armed Forces missile brigades of Iran will use exclusively low-altitude cruise missiles of the Qadir, Meshkat and Nasr-e Basir types to crush the air bases and other Qatar defense facilities. The effectiveness of the meter radar MNS AN / FPS-132 Block V against these targets is zero. Moreover, the Americans will lose the command center of the ADOC (Air and Missile Defense Operations Center) integrated command center system under construction in Qatar under a similar (but already 7,3 billion) contract.

At the time of the completion of work on our today's material, most of Abu Kemal was completely cleansed by the forces of the CAA, Hezbollah, the IRGC units and the Iraqi militia. For the White House, these events are an extremely serious blow, inflicted primarily on the inexorably sliding down the rating of President Donald Trump. There is no doubt that in order to remedy such a "pale" situation, an attempt will be made to provoke an escalation situation both in the Donbas and in the SAR. We will talk about Donbass in our next reviews, in the course of the emergence of new front-line reports from the military personnel of NM LDNR and political reports from the capital of “Square”. As for the Syrian theater of war, the most likely next step could be an attempt to involve the Syrian Arab Army and Hezbollah-controlled Tehran in numerous local clashes with the main pro-Arabian / pro-Turkish group, the Syrian Free Army. In other words, in this indirect confrontation, the Arabian-Iranian conflict will be expressed, which will play a huge role for Washington in destabilizing the SAR, and the metamorphoses created in these clashes can be an excellent reason for the SDF to intervene, with all the ensuing consequences, which we will continue to monitor.

Ctrl Enter
Noticed oshЫbku Highlight text and press. Ctrl + Enter
We are
Situational analysis of the death of the MH17 flight (Malaysian Boeing 777), made on the basis of engineering analysis from 15.08.2014Reports from the militia of New Russia for 27-28 September 2014 of the year
Military Reviewin Yandex News
Military Reviewin Google News
17 comments
Information
Dear reader, to leave comments on the publication, you must to register.