Heavy "Cargo": the death and the search for the minesweeper T-403

November 10 2017
11
The minesweeper “Gruz” was a modest workhorse of the Black Sea all the way up to his death fleetas they say, "plowman of the sea." But the work that these ships did was hard to overestimate, especially when the kriegsmarine were bombarded with sea mines. And, given that the unusual tasks fell on the shoulders of these inconspicuous ships during the war, they are worth more than just a mention.


The future minesweeper "Gruz" was laid at the Sevastopol Marine Plant (soon GCC No. 201 named after Sergo Ordzhonikidze) in March 1934. It was built on the project 3 (type "land mines"), the first Soviet project base minesweepers, originating in the 1930 year. A whole team of designers, G. Verakso, L. Dikovich, F. Muragin, worked on the future base minesweeper.

The works were carried out taking into account the experience of creating minesweepers of a pre-revolutionary type of “Klyuz”, so that the first pancake would not come out lumpy. But, of course, in comparison with the senior colleague in the 3 project, the “Explosive” type had more advanced trawling armament (two paravan-trawls, Schulz’s 1 trawl, 1’s snake-like trawl), reinforced artillery (100-mm B-24, 2 or B-3 trawl 12,7 45-mm machine gun, 21-mm gun 37-K, 20-mm anti-aircraft gun), was installed anti-submarine armament in the form of depth bombs (about 27) and bomb spreaders, and also installed devices for receiving and setting mines (from 30 to XNUMX ). 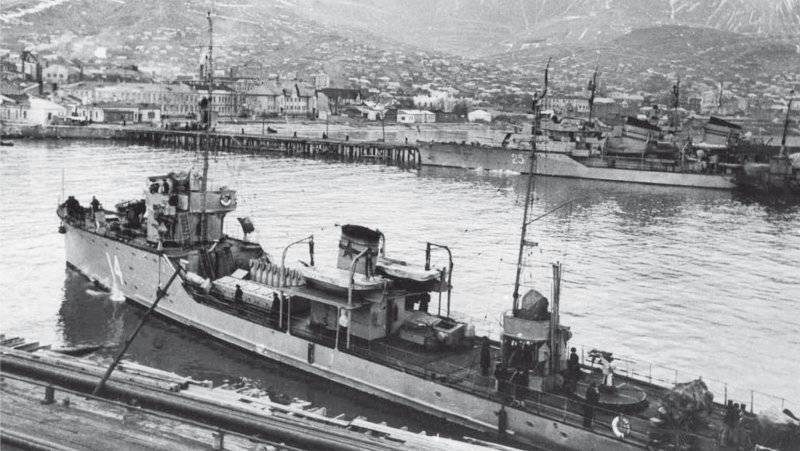 Minesweeper Shield of the same type with “Cargo” in Novorossiysk

Later, the 3 project became the prototype for the creation of a whole series of base minesweepers for the Soviet Navy — the 53, 53У and 58 project. It was at the Sevastopol plant that the 4 minesweeper of the 3 project (Т-401 - Т-404) was built.

Gruz launched the 21 on September 1935, the flag was raised in the 37 year, and in the 1939 the minesweeper was assigned the tactical number T-403 (BTSCH-403). Since July, the 1940 of the T-403 has been used as an experienced vehicle for testing new mine-control methods and systems.

From the very first days of the war, BGT-403 "Cargo", like all its 3 brothers, born on CVD No. 201, "Tral", "Minrep" and "Shield", took an active part in minefield fences at Odessa, Anapa, Novorossiysk, in the Danube Delta and so on. In addition, minesweepers were used to cover the operations of large forces. Of course, not counting their main function of trawling mines and carrying watch at Sevastopol. Soon the minesweepers set a new task - escorting transports.

But after Odessa, Sevastopol fell, despite all the efforts of the Red Army and Red Navy men. The fleet went to the ports of the Caucasus, where he performed the old and increasing number of new tasks. Finally, the enemy was stopped on the frontiers of Novorossiysk, and soon the legendary bridgehead “Malaya Zemlya” was formed, which quickly proved to the Nazis that it was only a dream to move south along the Black Sea coast. 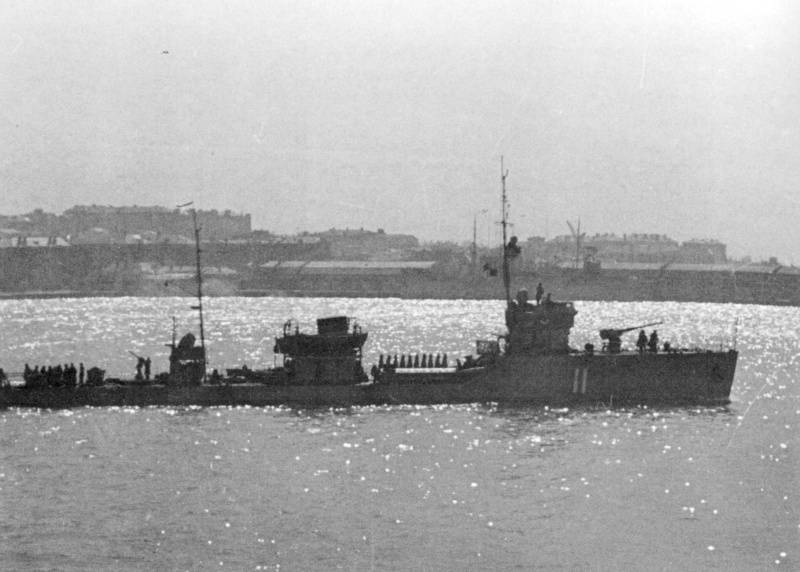 The entire severity and, consequently, the danger of evacuating the wounded, the transfer of fresh troops, provisions and ammunition needed for the bridgehead fell on the Black Sea Fleet. True, there were attempts to supply the landing party with food and ammunition with the help of aviation. But either our Air Force simply could not break through to the desired discharge point, or the dumped supplies fell into the sea, and sometimes worse, they fell to the enemy.

In the very first month of the existence of “Malaya Zemlya”, T-403 “Gruz” was included in the group of ships connecting the “continent” and the bridgehead. 27 February 1943, another group of ships headed towards Myskhako. The minesweeper T-403 was loaded with ammunition, food and had armed fighters on its board before 250-270. The ship anchored in the 3,5 cable from the Myskhak shore at a depth of 15 meters.

In 23: 25 the ship was attacked by a group of torpedo boats of the 1 flotilla of the cornette-captain George Christiansen. There was a roll up to 30 degrees on the left side and trim aft with the flow of water into the feed compartments. The explosion dissolved some sheets of plating up to 15 cm apart, but the edges of these sheets were curved upwards. Trawl, crane, 45-mm and 37-mm anti-aircraft gun thrown overboard.

To level the list, the commander ordered the group of fighters with cargo to go to starboard. Despite all the efforts, the water continued to flow into the feed rooms. A landing craft and a schooner came up to transfer the remaining fighters on the dying ship. As a result of the evacuation of personnel roll began to increase rapidly. The struggle for the survival of the ship continued until midnight. The words of the dying minesweeper flew on the air - “send tugs”. But the effort was in vain. After midnight, the sinker of the minesweeper “Cargo” disappeared under dark night water.

So ended one историяand another began. A few months ago, publications appeared in the press with loud enough headlines telling how the cargo minesweeper Lost was discovered earlier. And interspersed in the text - "finally", "after a long search," etc. - I was even more surprised, because it looked, to put it mildly, incorrectly.

Firstly, it was quite logical to ask what was the long search at the depth of 15 meters less than a kilometer from the coast? But let's leave these disputes to divers and divers. 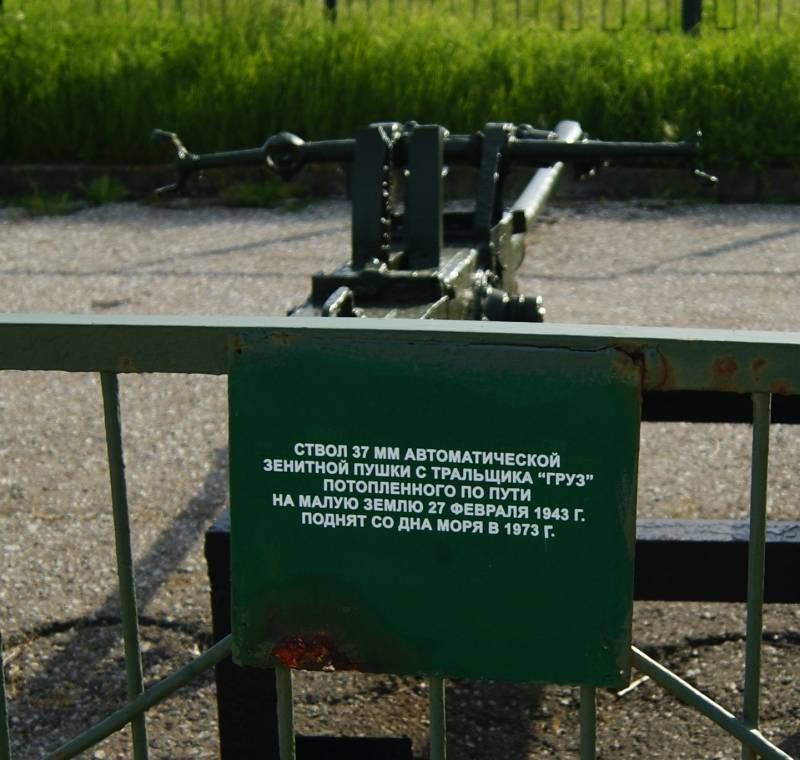 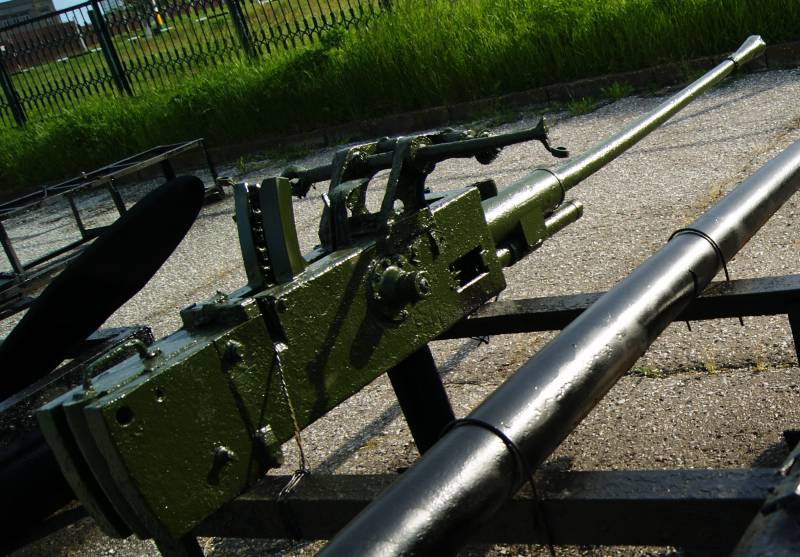 Secondly, and most importantly, the 37-mm automatic anti-aircraft gun, thrown overboard on the tragic February night of 43, safely stands in the memorial exposition "Weapon and military equipment of the Great Patriotic War 1941-45 '. The gun was lifted up right in the 1973 year! Along with the gun, the ship’s bark with the inscription “Cargo” was also raised. 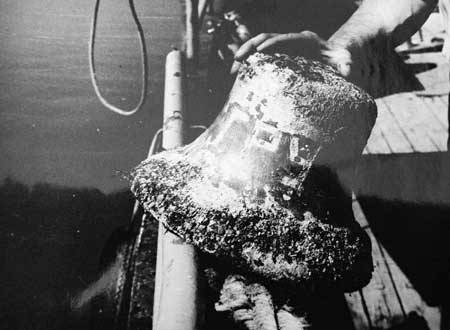 Thirdly, on the site of Novorossiysk company “RTK Diver” in the section of wreck diving (diving on wrecks) is listed as an object among many and T-403 “Cargo”.

Therefore, the only reasons why the word “discovered” can somehow appear here can only be the fact of the complete destruction of the hull and dispersal of its parts, as well as the dashing 90s. After all, it was then that there was almost no one to preserve the history of the war, and of his own country as a whole, but nobody remembered about the coordinates of some minesweeper and those divers who raised the gun, martens and other war artifacts. 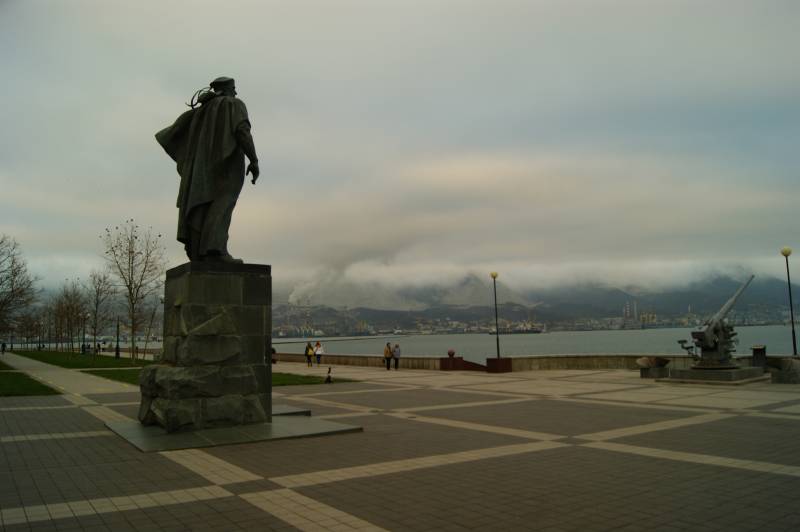 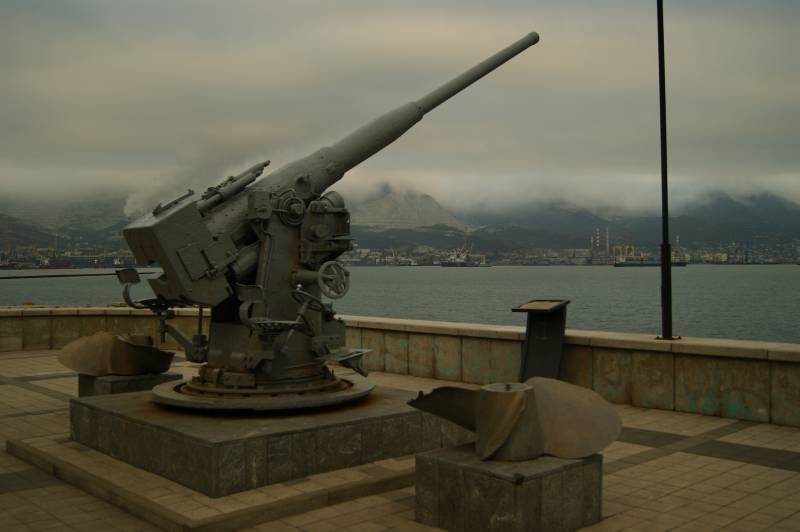 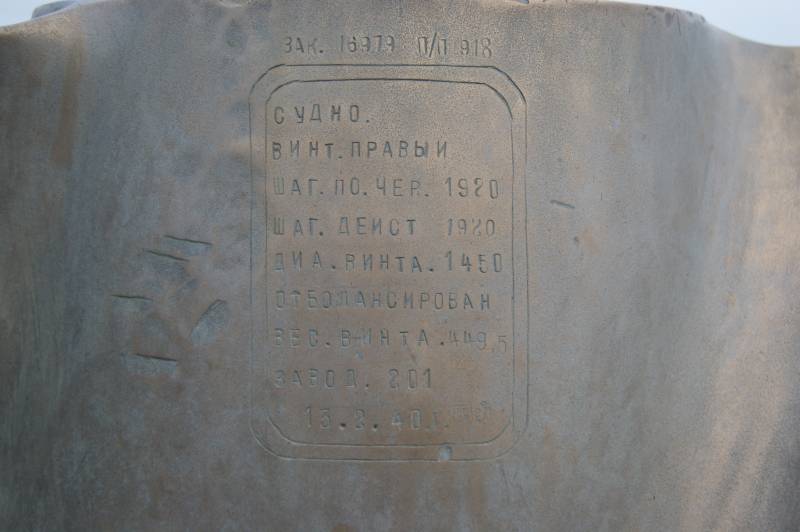 One way or another, the “missing” minesweeper was “found”. And they did not just find, but also lifted the X-NUMX-mm gun B-100 from the sunken T-24 “Gruz” and installed it in front of the monument to the “Unknown Sailor” in Novorossiysk. This instrument, which has also become a monument, is of particular value in the sense that there was practically nothing left of the entire series of minesweepers of the 403 project, except for memories and photos. So this is perhaps the only opportunity to touch the material history of a whole series of the first basic sweepers in the Union, the modest "plowmen of the sea" who forged the great Victory. 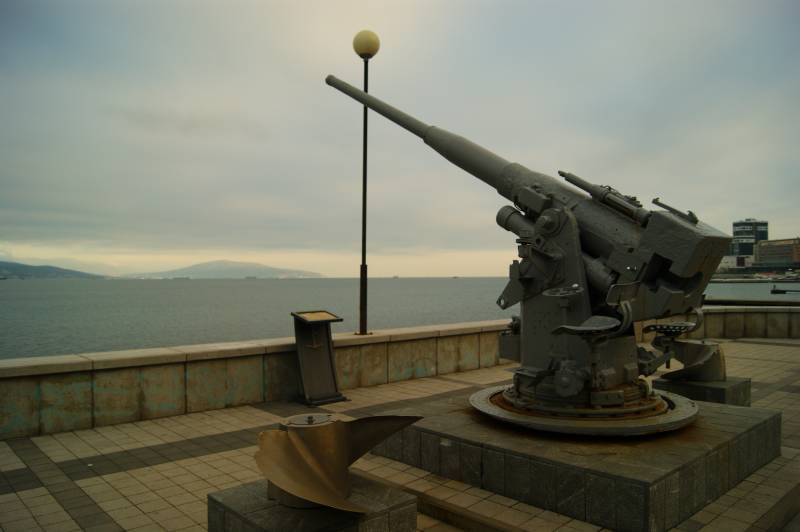 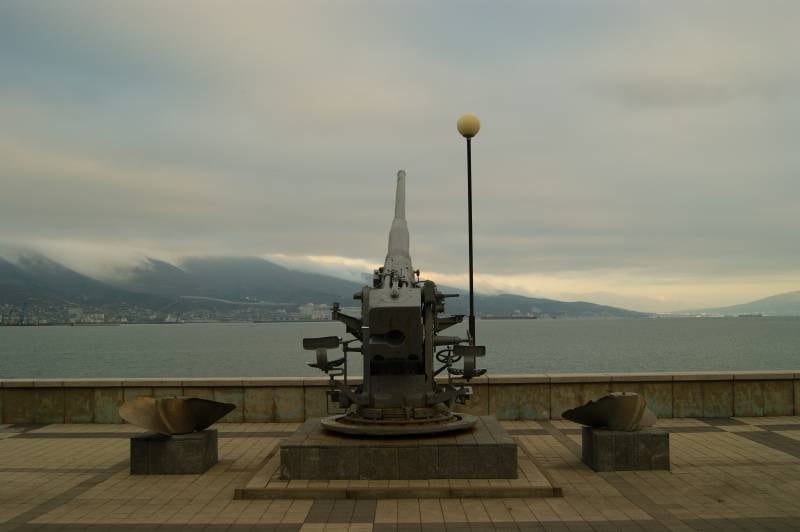