And the knight's trumpet sings,
Glade echoed them and the sky,
Visits lowered riders,
And the shafts are attached to the shells;
Here the horses raced, and finally
A fighter came close to the fighter.
("Palamon and Arsit") 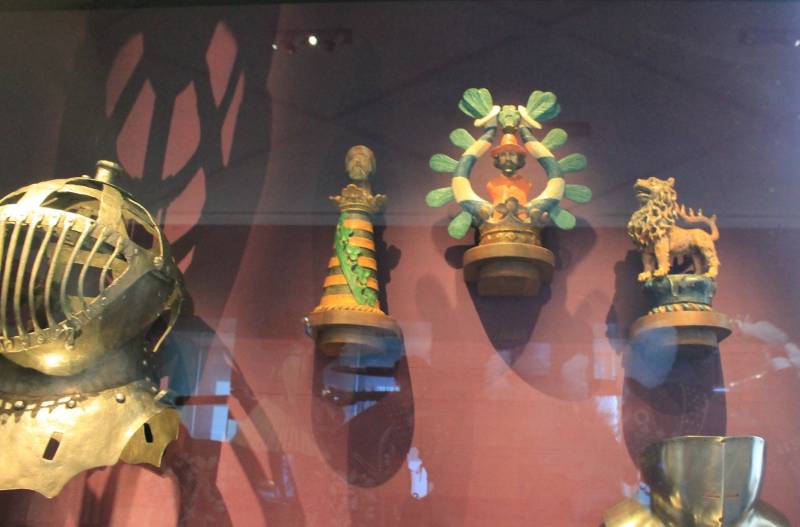 Helmet jewelery (see photo on the left), designed for mace combat, presented in Armory ward of Dresden. As you can see, in this case they differ in helmet-mounted jewelry for tophelm helmets, primarily in that they are small in size and are attached to the very top of the helmet, where there is a metal pin for this.

By the beginning of the 15th century, a completely new form of the two riders' spear match was born in Germany, immediately gaining great popularity — rennen or “racing”. Vendalen Beheim reports that he invented the Albrecht-August bout, Margrave of Brandenburg, and he also became its popularizer. The essence of the competition was to knock an opponent out of his opponent with an accurate strike, which immediately showed the success or failure of the fight. But the main innovation of the battle was that its participants really had to jump around the lists. In the previous Geshtech contest, the horsemen immediately after the collision upset their horses and then returned to the “start” place, where they corrected the ammunition and received new spears. That is, there was a pause between the collisions. Now the riders, confronted, continued moving, changing places, new spears were handed to them “on the move”, after which they again attacked each other, and all this was happening at a fast pace. There could be several such clashes, which, of course, increased the entertainment of such a tournament. 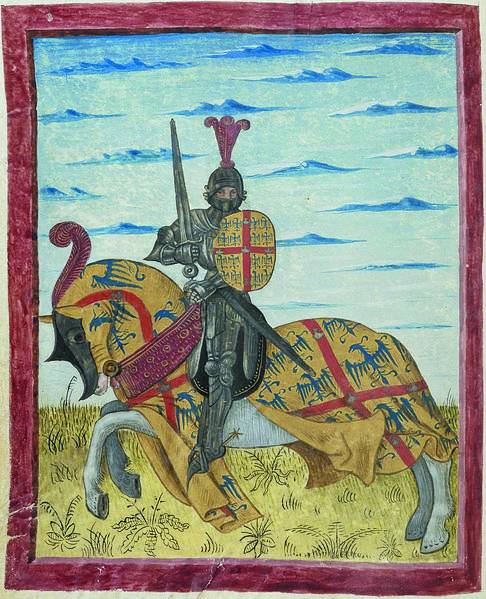 Accordingly, the special armor rentsoyg was created under it, borrowing its form from the gothic armor of the XV century. The helmet for this contest was a salad without a visor, but with a viewing slot. Since the helmet-mounted ornaments were uncomfortable to fasten, we confined ourselves to the feather sultan. The protective cap under the salad remained the same as that of the “toad head”. The breastplate of the breastplate, like that of the SteikhTseig armor, was supplied with a spear hook, and at the back had a spear bracket. But the cuirass was additionally screwed to her metal chin, which covered the entire lower part of the face. Hip protection served plate armor, "skirt", attached to the cuirass, was used only at the very beginning. 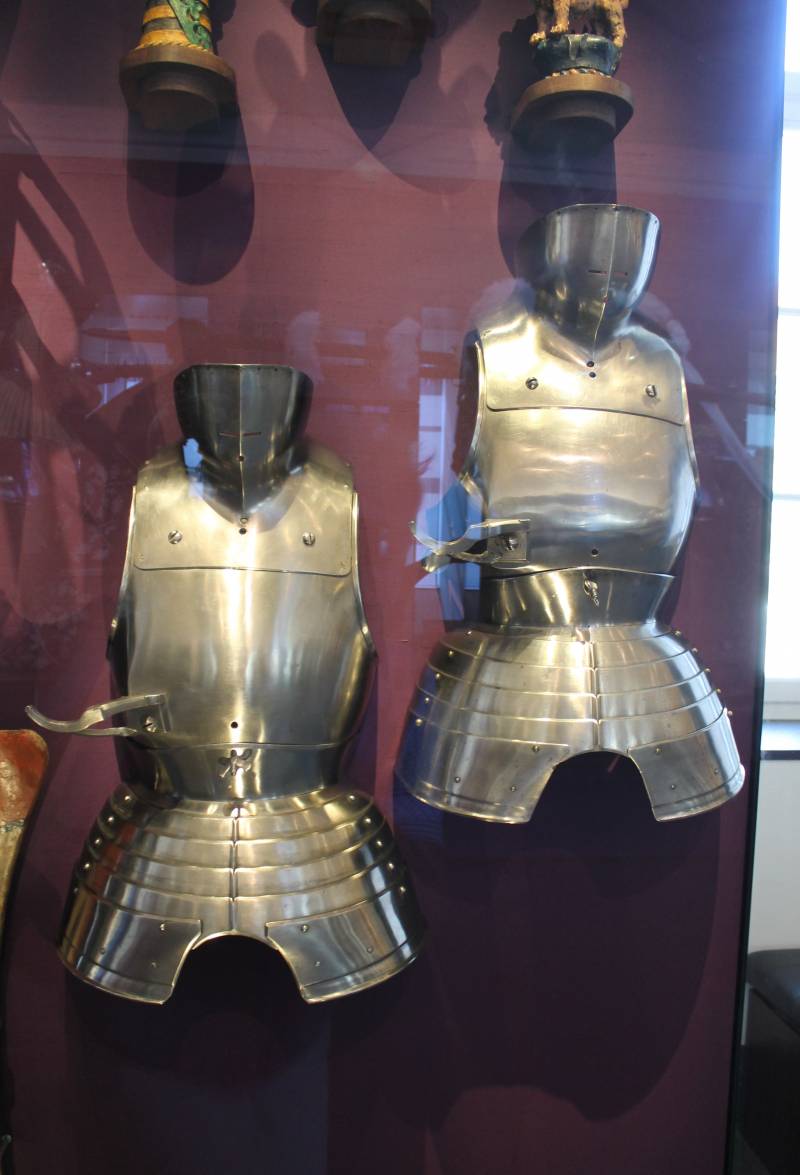 Renntsoyg demanded himself and a special tarcha, called renntarc. It was also made of wood and covered with leather, painted black and with iron trim on the edges. This shield tightly adjoined to the cuirass, repeating its shape and the shape of the left shoulder pad. The size of the renntarcha depended on which version of the tournament it was intended for. For “accurate” rennen and Bundrennen, he had a height from belt to neck, and in the so-called “hard” rennene - from the very middle of the thigh and to the viewing slot on the helmet. That is, it was a rather thick wooden plate, profiled under the armor of a knight. From above, the painted wood was covered with fabric with painted on it or embroidered heraldic emblems of its owner. 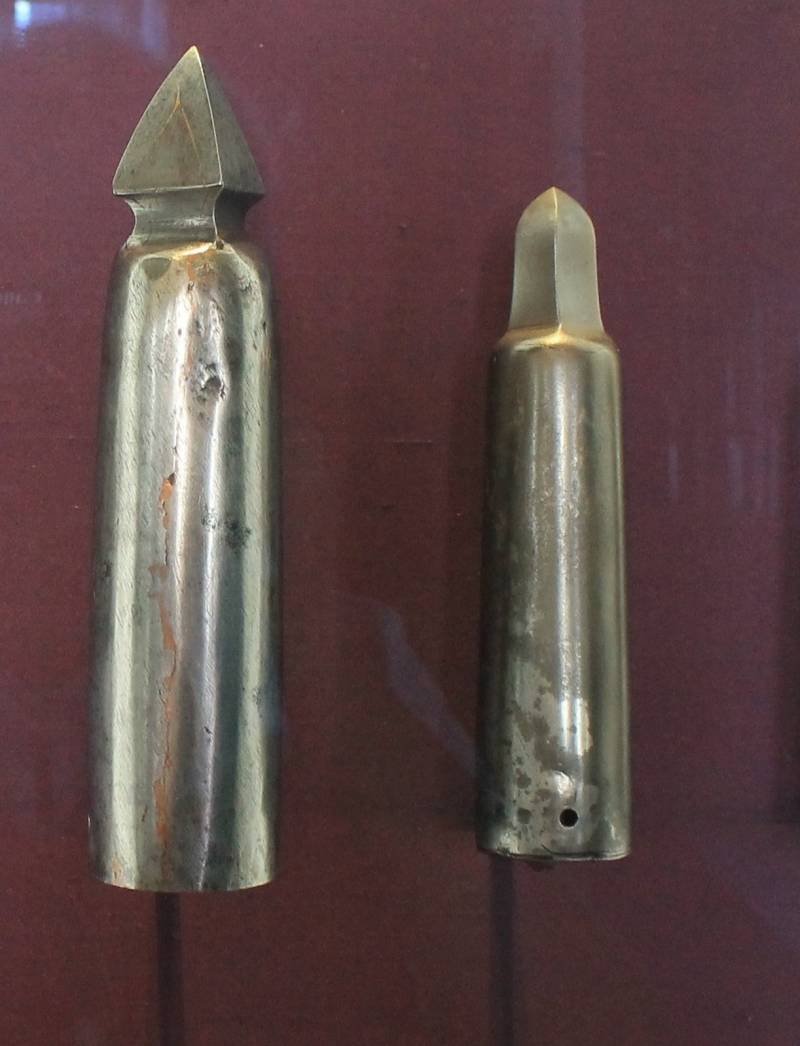 The spear for horse attack in rennen also became different - it is easier for the copies used in the tournament before. It was about 380 cm long, 7 cm diameter and about 14 kg weight. But the tip was set on him sharp, not crown! True, the length of the tip was small, that is, it could not penetrate deep into the target. The shape of the protective disk on the spear shaft has also changed. Now it was a funnel-shaped flap. Moreover, its size constantly increased in such a way that, over time, it not only covered the rider’s entire right hand from shoulder to wrist, but also part of the chest. 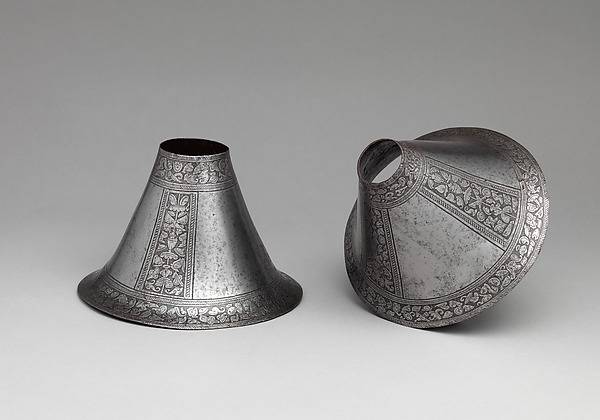 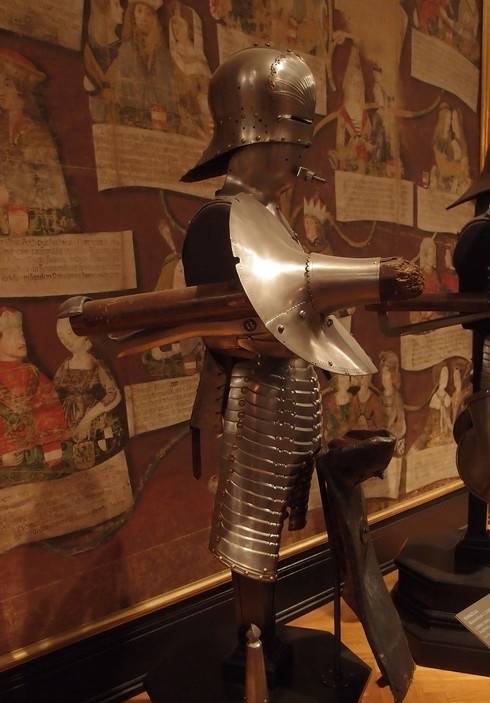 Armor for armor rentsoyg. (The Imperial Hunting and Arms Chamber of Vienna)

In the XV and XVI centuries. the so-called “field tournaments” were also imitating the real battle. The rules were simple: horse knights were divided into two equal in number squad and fought at the lists, lined up in two lines. Participating in this kind of competition, the knights, as a rule, put on the same armor as the war. The difference between the tournament and the combat option was only that they were attached to the plate with the chin, which reached the viewing slot of the helmet-salad. 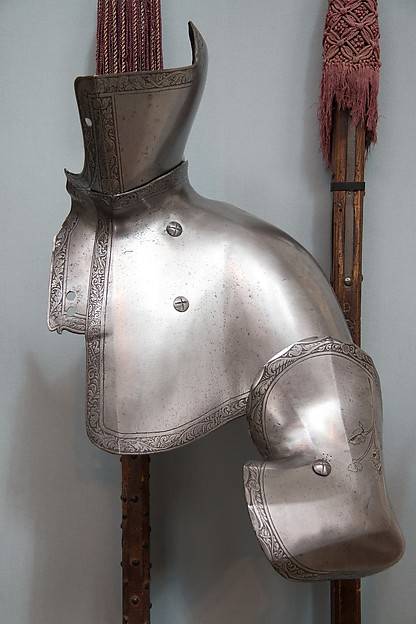 In addition, the tournament participant had the right to attach to his armor also other additional protective plates. For example - a solid-forged plate on the entire left shoulder of the shoulder strap along with the chin, or the grand guard. Tournament armor differed from combat, except that it had a hole for mounting screws. The rider’s armament was a traditional tournament spear, very similar to a combat lance, but only slightly shorter in length and larger in diameter, and with an elongated tip. 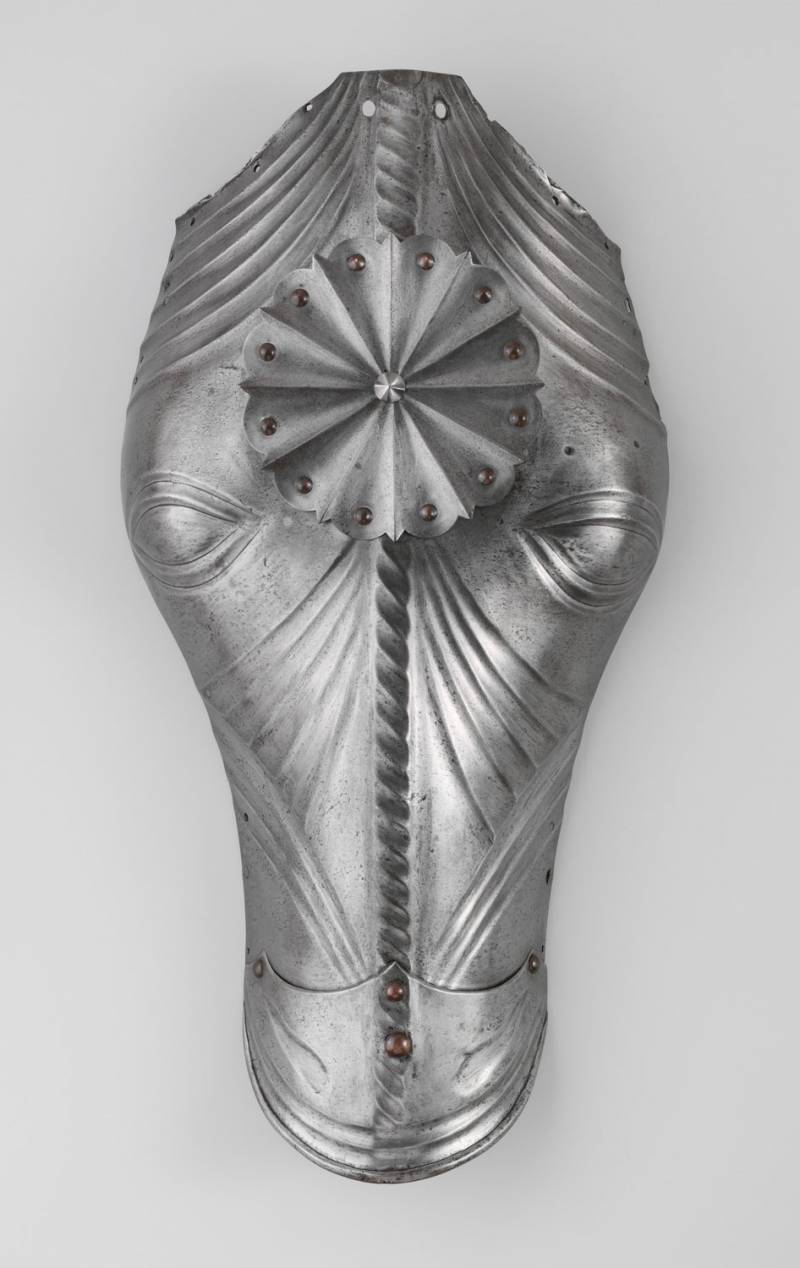 Naturally, horse equipment for tournaments also had its own characteristics. For example, the difference was observed in the form of saddles. Many of the saddles, besides being richly decorated, had high front bows, which made the rider no longer needed armor to protect the belly and legs. The reins could be the simplest of ordinary raw hemp ropes, but at the same time they were sheathed with different ribbons of the same color as the horse blanket. If during the battle the bit was torn, the rider controlled the horse with a spear. 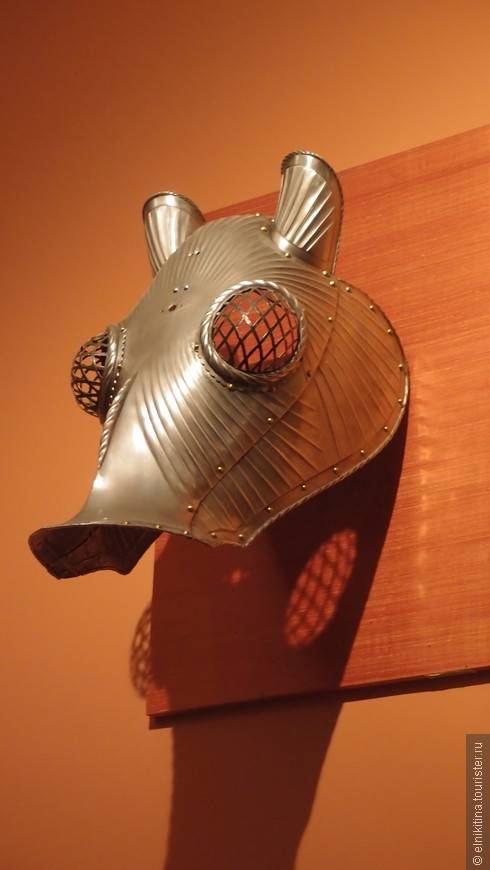 Headrest with protective eye flaps. (The Imperial Hunting and Arms Chamber of Vienna)

The horses were covered with two-layer leather-skinned canvas, the first layer, and linen fabric - the second. The muzzle was usually covered with a metal headrest, and very often such a headrest was “blind”, that is, it had no slits for the eyes. In the same cases, if any, they were protected by bulging eye-flaps. Interestingly, the earliest image of such a blind forehead refers to the 1367 year. 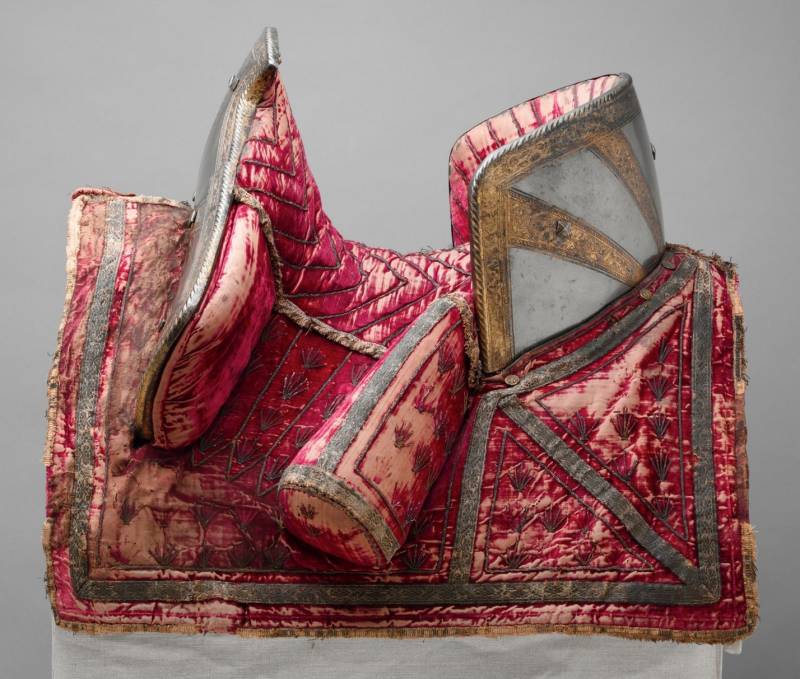 Saddle and stirrups from the Dresden Armory. As you can see, the front bow of this saddle, by the way, like the back one, is reinforced with metal plates with engraving and blackening. It is clear that it is beautiful, but such a plate was also a good additional protection for the rider. 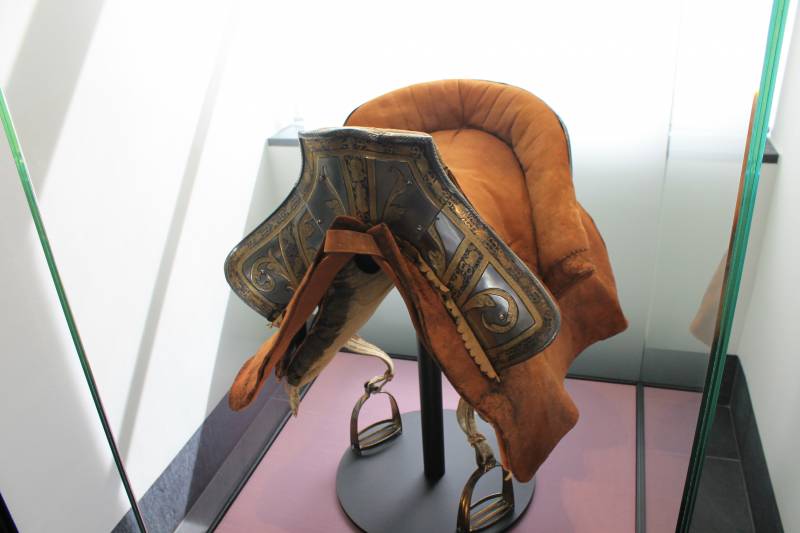 But this saddle is known to have been made by the famous German gunsmith Anton Peffenhauser from Augsburg after 1591 of the year. (Dresden Armory)

Well, now let's try to go deeper into the tournament science even more and consider different types of the same tournament battle, as well as the characteristic features of the armor that were intended for them. The same Geshtech, for example, had a number of interesting varieties - well, like, for example, hockey is divided into hockey, puck and hockey. So-called “high saddles” Geshtech, “General German Geshtech” and, finally, “Geshtech bound in armor” also appeared. 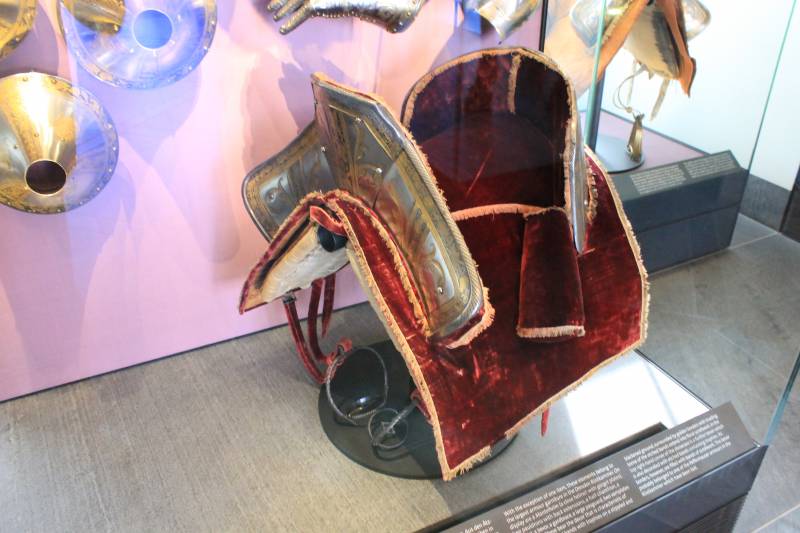 Another saddle by Peffenhauser. (Dresden Armory)

Here, for example, the tournament "high saddles." This name alone suggests that the rider had to sit in a high saddle, like that used in battles. Wooden front bows at the same time not only protected the rider's legs from the front, but also covered his stomach to his chest. The saddle seemed to embrace the rider, so that he could not fall out of it. However, they fought in it on spears, not on maces, while it was necessary to break their spear on the enemy's shield. It was the safest variant of the tournament duel, as the rider could not fall from his horse. 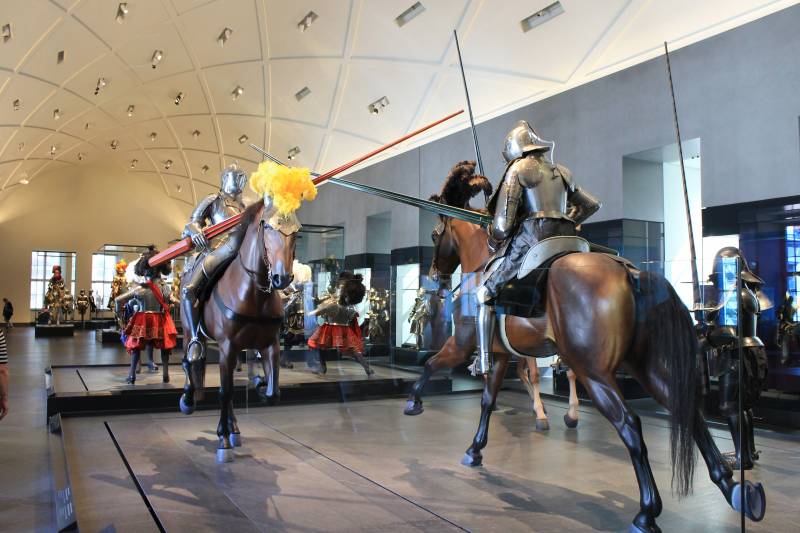 Participants in the "field tournament" in the so-called "Saxon tournament armor." They differed from all the others by simple polishing and the absence of decorations, as well as by the characteristic fastening of the helmet to the back of the cuirass. (Dresden Armory)

On the contrary, in the “General German Geshtech” the saddle was designed in such a way that it had no back bows at all. It was necessary to strike the enemy with a spear so that he flew out of the saddle. In this case, the knight's legs were unprotected, while the horse had a huge breastplate made of coarse linen, filled with straw. Why was this necessary? But why: these fights did not provide for a separation barrier, so a two-head-to-head collision could have the most disastrous consequences.

Geshteh "clad in armor" from the previous types of competitions differed only in that the riders' legs were, as before, covered with metal, that is, it was closer to the "good old times" than the two previous ones.

Italian geshtech with a barrier was safer in all respects. Therefore, by the way, in this case deaf headbands were not used, but were used with lattice or “perforated” convex eye flaps.

The varieties of rennen were just as varied ...