November 16 2017
109
It may very well be that a soldier will soon be sent to war, among other things luggage, having a plastic bag in his hand weighing no more than five kilograms. There will be four rising plastic pipes, each of which will contain an 750-gram (the weight of the Russian offensive grenade 1914) a grenade with a charge of explosive CL-20, which is X times more powerful than TNT. That is, 20 grams of warhead in this grenade will be equal to two kilograms of this standard explosive for today. Housing made of plastic or paper derived from waste. The fragments are made of pressed wood or molded basalt - this is already done, moreover, even basalt fiber is made. So the level of environmental friendliness of such ammunition will be the highest! At the head there is a portable video camera, and behind the small jet engine and cruise control rudder, and the transmission of commands is carried out by wires of magnesium alloy wire and burned after use. The firing range is in the range from 100 to 50 meters, that is, it is a peculiar analog of the 1500-mm mortar of the last war, but incomparably more powerful. 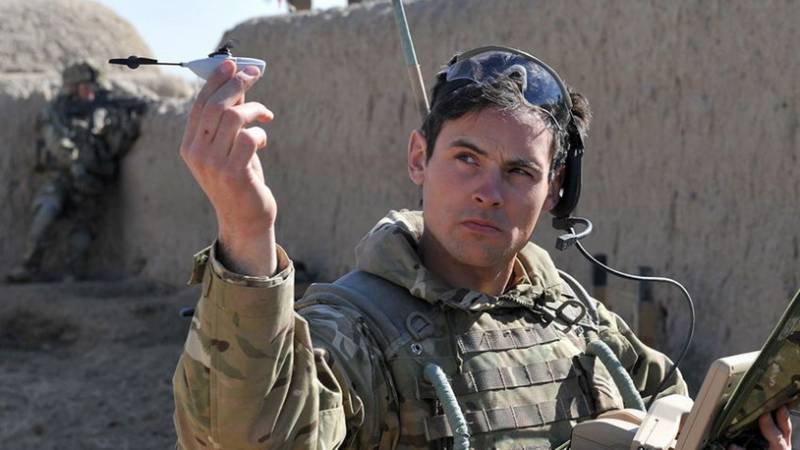 Speaking of drones ... Here is one of these miniature drones. True, his blades are not sharp. But this is still ...

The “suitcase” itself is also a base plate, and potassium nitrate is pressed into the plastic from which it is made, so if it is set on fire with a special red button, it will burn all without a trace. Guidance is carried out from the control panel with a joystick and is controlled by the display screen. Additional communication with the drone is possible, so it will be very difficult to hide from such ammunition. It is possible to shoot them according to the principle - one grenade - one enemy and in this case neither the helmet nor the most modern bulletproof vest will save him with a direct hit. Or - one grenade - several opponents, since the radius of destruction by shrapnel - 25 meters allows for action on the areal target. That is, one fighter armed with one such “suitcase” will be able to guaranteedly destroy or incapacitate at least four enemy fighters! This is more than enough for a unit of 10 people! Moreover, transport drones can quickly replenish their ammunition.

And this is despite the fact that all the same drones will be able to provide fire support to their subunits, dropping cylindrical mines that are screwed into the ground and containing a television system or ... a missile system or self-exploding. Naturally, the query system "friend or foe". Breaking through the chain of such mines will be extremely difficult, since their part protruding above the surface of the earth can be well disguised. Each mine can again have its own operator or the simplest “brain” connected to motion sensors. Moreover, you can drop them in the deep rear of the enemy. For example, by the road. However, in Western Europe, lattice fences were installed along the roads, which would prevent a shot from the missile complex. However, the shelling of vehicles on the road in the rear of the automatic weapons the thing is very unpleasant, because even today one killed soldier is a serious loss.

Of course, all such and similar combat systems will require considerable expenses. However, it is on this path that the developed countries will be able to get real military advantages over the less developed ones in the fight against international terrorism and for the purity of the environment!

So, what other small arms do you need for a soldier who has such weapons in his hands? Only a pistol or a submachine gun in case of a completely unexpected attack. And what could it be? Well, let's say, a pistol or a submachine gun that shoots bullets in the shape of a ... ring! Imagine for a moment that we cut the usual bullet in half, turned the resulting part into a plane and bent this plane into a ring. Depending on how we bend it, we will have a ring with either a tapered outer surface or a smooth one. Well, if smooth outside, then the cone will be inside. In any case, the edge of such a ring on one side will be dull, but on the other - very sharp! And it will still be a bullet with all its properties. 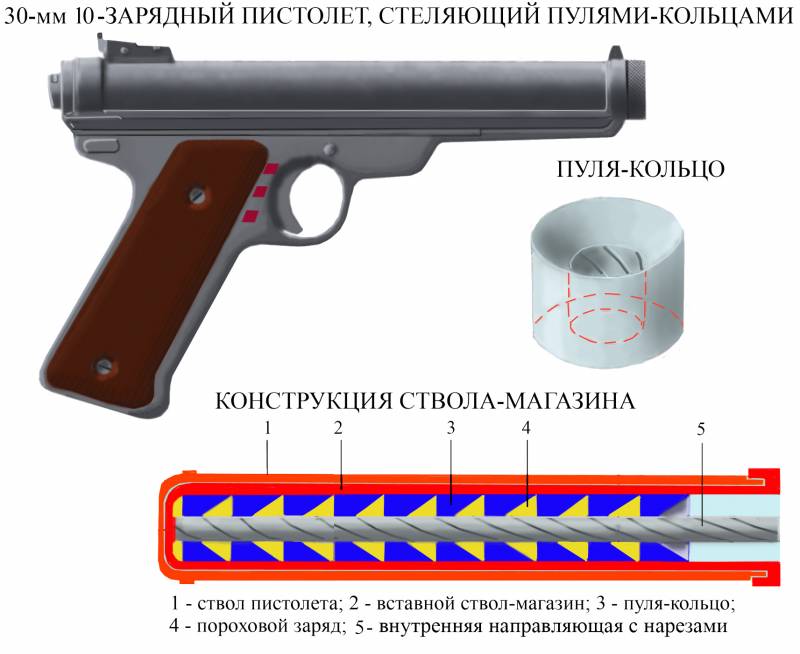 Let's look at the picture with the 30-mm 10-charging pistol presented on it, which shoots just such bullets. Again, there are no moving parts in it, except for the “mobile phone” in the handle and the touch trigger. The magazine is also a barrel and chamber. Inside the trunk of the store there is a rifled guide on which bullet rings are put one after the other, with the powder charges and initiator chips located between them in the recesses in the bullets themselves. The outer shell of bullets is smooth, as well as the surface of the barrel-shop.

Since the distance from the muzzle of each bullet is different, all the warheads are also different, “numbered”, of different power, which ensures the stability of the ballistic characteristics. When fired, the microwave radiation of the control “cell phone” in the handle initiates the desired chip, and the latter ignites the propellant charge. The bullet slides through the cuts and, unwinding, flies out of the barrel. Due to its caliber and sharp edge such bullets can cause very serious damage. In addition, they will not give bounce, as in contact with the sloping surface of its edge, it will simply tighten and stand perpendicular to it. We must not forget about the purely psychological effects of weapons of this caliber: it will be enough to look at the hole in the barrel so that the arms go up by themselves! Moreover, it can be either a pistol or a submachine gun with an ammunition in 30 shots, designed exclusively for self-defense, as well as ... police and special forces, for example, bank guards. 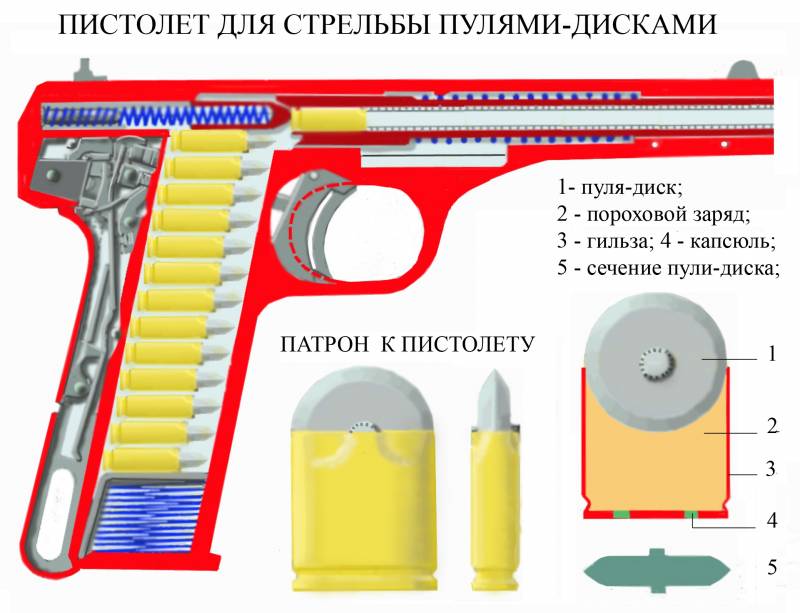 Even more original is the fundamentally new ammunition for small arms, the bullet of which has the shape of a disk with a sharp cutting edge. It consists of a flat brass sleeve and a steel bullet in the form of a flat or rhomboid disk in cross section, through the middle of which passes a tompak gear gear jutting onto 2 mm on each side of the disk having a thickness of 5 mm. Thus, the total thickness of the "bullet-disk", that is, the "vertical caliber", will be 9-mm, as in modern pistols and submachine guns.

The barrel for this bullet has a corresponding cross-section of the bore, but its “highlight” is the arrangement of vertical grooves for the passage of gear gears. On the one hand, the groove has a serrated cut, on the other hand it is completely smooth. When fired, the gas pressure causes the bullet-disk to move forward and, on the one hand, scroll along the serrated groove and slide along the opposite smooth wall! Thus, the disk begins to rotate, like a regular round bullet, and becomes a flywheel-gyroscope. You can use and smooth protrusions without cutting, which will occur already during the movement of the bullet in the barrel. Experiments are needed here to find out what is best. 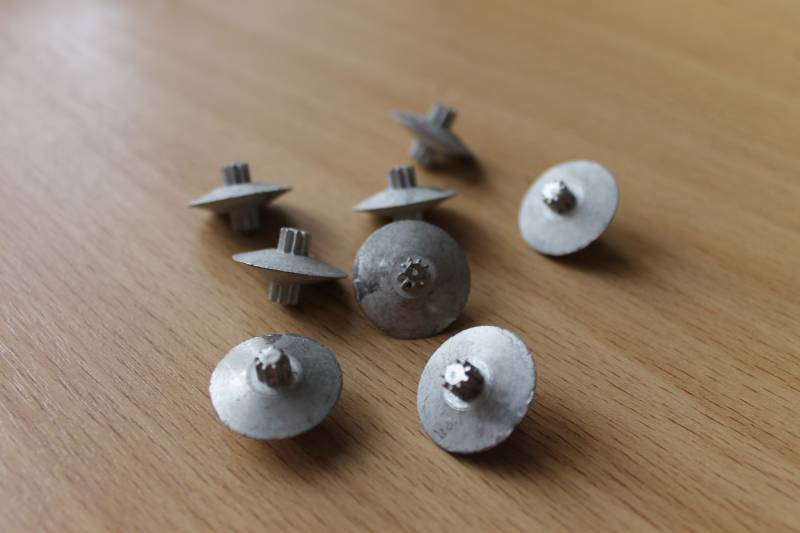 Here they are - "the most dangerous bullets in the world."

The peculiarity of the movement of such a "flywheel" is that with a sudden deceleration (the well-known effect of a child's top or whirligig!), It begins to move in a chaotic manner. That is, if it hits the object, it will “lead” such a bullet from the trajectory, and it will inflict an extremely heavy defeat on it. The sharp cutting edge contributes to the defeat of the protective equipment of Kevlar threads and also causes cutting damage to soft tissue. The diameter of the bullet can be 20-mm for a pistol, and for submachine guns 20, 30 and even 40-mm! The production of such bullets will not be difficult - it is stamping and knurling. And the number of parts - just 2, facilitates their assembly on the conveyor. The sleeve is a traditional brass flat without rim, which facilitates its extraction and filling of small arms stores with such ammunition. It is necessary to pay attention to the psychological moment. Such a weapon is unusual, naturally, that rumor and the media immediately spread the most incredible rumors about it, and it will be many years before it becomes familiar to everyone. Until then, people will be frightened of only a flat trunk with a cross-shaped hole that is aimed at them! The barrel itself can be made by stamping from the two halves openable for cleaning. That is, the design of the parts of such weapons is traditional.