November 10 2017
10
During World War I, several warring armies encountered a shortage of necessary weapons, which, among other things, led to the appearance of original pneumatic tools. Subsequently, they succeeded in replacing them with full-fledged powder artillery, but the principle itself was not forgotten. In the future, attempts have been repeatedly made to create new pneumatic guns or grenade launchers. One of these samples was created in Italy in 1930 year.


Unfortunately, very little is known about the Italian pneumatic grenade launcher. In addition, only two high-quality photos of this product have been preserved. As a result, the origin, technical features and characteristics of the sample remain unknown. Moreover, история not even kept the official name of the grenade launcher. It is known that the project has not progressed beyond testing. However, the available information allows us to make an approximate picture, as well as make some assumptions about the reasons for the refusal of the military. 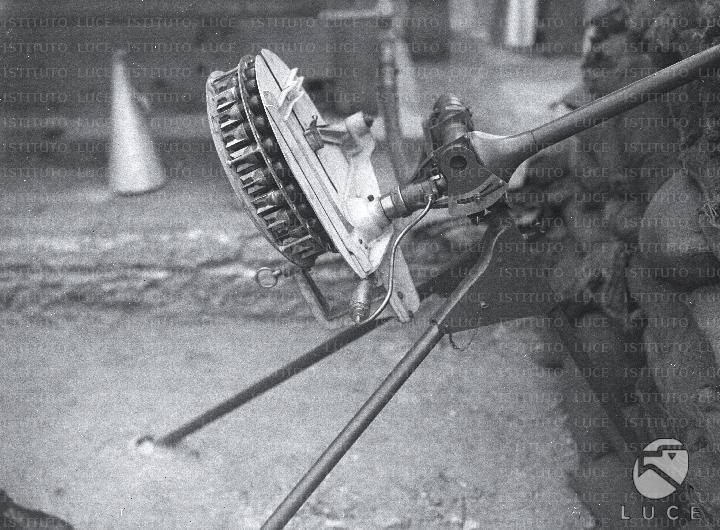 An experienced grenade launcher in a combat position. The perforated part of the barrel remained behind the scenes.

On April 15, 1930, comparative tests of several promising models of infantry weapons took place at one of the training grounds near the Italian city of Tivoli. Representatives armory companies and armies tested a number of rifles, submachine guns, etc. on the shooting range. In addition, the original pneumatic grenade launcher was presented during these tests. Most of the samples presented were small in size, and these weapons were displayed on a regular table. A much larger grenade launcher was deployed in a combat fashion, and also covered from a conventional enemy with sandbags.

What kind of design bureau has developed a promising grenade launcher - is unknown. Details of the test results in April 1930 are also missing. At the same time it is known that the project has not advanced further inspections at the site. For one reason or another, the Italian military was not interested in such weapons. At the same time, several samples shown in the framework of the demonstration tests, managed to reach mass production and operation in the army.

The surviving photos show in some detail the construction of the grenade launcher, and also reveal some features of its operation. In particular, this allows you to make certain assumptions about both the characteristic features of the design and the combat capabilities of the product.

Due to the large size, the pneumatic grenade launcher was deployed near the pavilion located at the shooting range. At the end wall of the building there was a massive gas cylinder with all the accompanying means. Not far from it was the actual grenade launcher. The tank for compressed gas and weapons were connected by a flexible hose. Before the grenade launcher laid sandbags, imitating the real firing position.

Italian pneumatic grenade launcher arr. 1930 was an easel. The body of this gun was placed on a tripod machine, borrowed from one of the serial machine guns. Such a machine had one front and two rear tubular supports, at the top connected by means of a metal block with fastenings for weapons. The design of the machine provides free guidance of weapons in two planes.

The grenade launcher itself had a very interesting design and was distinguished by specific contours, as well as the absence of some usual details. In fact, it consisted of a trunk equipped with a set of fixings, systems for installing the magazine and simple pneumatic devices. The receiver of the traditional appearance was missing. Despite this, the grenade launcher could solve the tasks.

Apparently, the grenade launcher was supposed to use existing ammunition borrowed from one of the serial systems. As a projectile for it could be proposed grenade SR2, created together with a rifle grenade launcher Tromboncino M28. This product had a body with rounded head and tail parts, between which there was a cylindrical section. The tail of the grenade had an X-shaped plumage. The SR2 grenade had a caliber of 38,5 mm and weighed 160 g. It carried an explosive charge, driven by a percussion fuse. In order to avoid a premature explosion, the fuse was blocked during transportation by a check with a ring. 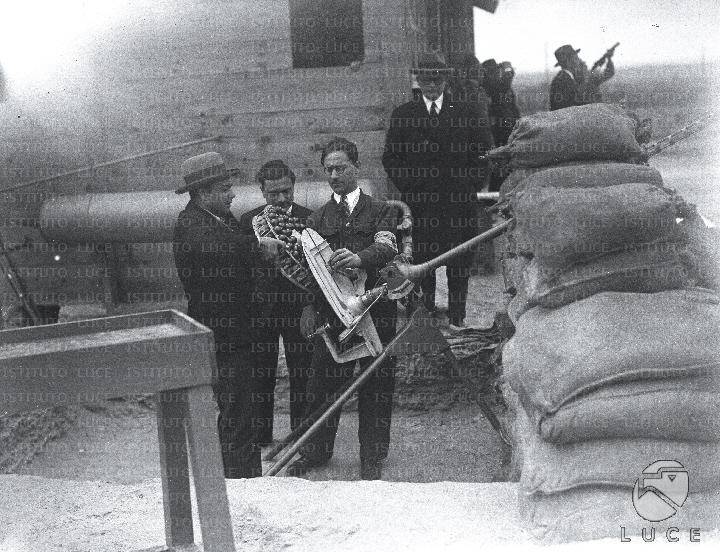 The process of installing the store, you can see the original placement of ammunition. In the background - a large cylinder for compressed gas

Known assumptions about the use of other ammunition. So, instead of the SR2 grenade, a similarly externally 45-mm shot for the Brixia Modello 35 system could be used, but this version most likely does not correspond to reality. As far as we know, a grenade caliber 45 mm was created a few years after the pneumatic grenade launcher - when it was already abandoned.

The largest part of the pneumatic grenade launcher was the 38,5 mm caliber barrel. The use of compressed gas has led to the need to increase the relative length of the barrel to indicators that can provide the required acceleration of grenades. In the muzzle of the long barrel several large side windows were provided. In the breech, near the rear end, there was a device for fixing on the machine. In its composition there was a curved conical front part and several rear struts. The upper strut had a hole for the installation of the axis, providing a vertical pickup.

On the left, on the means of mounting the barrel, there was a fitting for connecting the hose from a tank with compressed gas. Below it, on the right side of the trunk, there was a place to install a curved metal tube that provided gas supply to the mechanisms of the store.

Italian engineers have proposed an interesting version of the system of ammunition. Directly on the breech of the trunk was placed the support of the store, which had a complex curved shape and cross-section in the form of a corner. The upper part, consisting of a pair of units placed at an angle, served as a support for the magazine cover disk. It consisted of two halves, fastened by several force elements. The lower part of the support went under the store, where one of the pneumatic devices was placed on it. Also attached to it is an L-shaped part with a clip holding the store in its place.

Grenades in the amount of several dozen pieces were proposed to be placed in the original store. This device was a round pallet with a solid bottom and a light fence at the side with a central axis. Such a store with shots arbitrarily placed in it should be placed behind the grenade disc and fixed in the working position with the help of the bottom screw clamp. Apparently, no means of delivering grenades to the line for unloading were used. Ammunition type SR2 had to go down solely due to gravity.

How exactly was organized the supply of grenades in the chamber - is unknown. It can be assumed that the lower pneumatic cylinder was connected with the mechanism that picked up the grenade from the magazine and pushed it into the barrel. However, there are still questions about how to lock the barrel before firing. Probably, the processes of filling and locking were provided by common mechanisms with a common pneumatic drive.

Unfortunately, the preserved photos do not reveal the design of the controls, which makes it difficult to study the appearance of the grenade launcher. Most likely, the trigger mechanism or the combat valve was placed on the left side of the weapon that did not fit into the camera lens.

Based on the available data, it is possible to present the principle of operation of the Italian pneumatic grenade launcher mod. 1930 d. After deploying a gun to a position and connecting it to a gas cylinder, it was necessary to put the magazine in its place and hold it in the working position. The machine-tripod machine-gun design provided free guidance in the required direction, although the presence of a gas supply hose could significantly reduce the permissible horizontal pickup angles.

Interacting with the authorities, the calculation was to ensure the dispatch of one of the grenades into the chamber, followed by locking the barrel. The flow of gas under pressure into the space behind the ammunition led to its acceleration. A relatively long barrel allowed us to obtain acceptable indicators of the initial velocity with limited capabilities of the pneumatic system. There is reason to believe that such acceleration provided a firing range, at least, no worse than that of the Tromboncino M28 rifle grenade launcher. How exactly a grenade launcher could fire - single-handed with automatic reloading or bursts - is unknown.

The exact characteristics of the pilot airgun remain unknown. One can only assume that the 160-gram high-explosive frag grenade could have developed a significant speed and, at an optimum angle of elevation, could fly up to a distance of several hundred meters. In terms of its power, the ammunition could not be compared with the shots of other artillery systems of the time, but under certain circumstances it was of interest.

As far as is known, the Italian pneumatic grenade launcher, developed and presented in 1930, passed some tests, and soon its history ended. Experts familiar with this development, and it is unlikely she was able to receive praise. As a result, the product was not recommended for adoption and mass production.

The reasons for the failure of the grenade launcher are obvious. He had no special advantages, but at the same time he was distinguished by a number of characteristic flaws, the elimination of which was fundamentally impossible. The gun itself was distinguished by its small size and weight, and also showed acceptable firing characteristics. Instead of a powder charge, compressed air was used, which did not unmask the firing position with noise and flash. Actually, this was all the positive aspects of the original system. All its other features could be considered flaws.

From the point of view of firepower, the pneumatic grenade launcher for the SR2 shot should have been seriously inferior to the existing small-caliber mortars. Such weapons surpassed the grenade launcher in terms of the main features of the operation. Mortars were easier, simpler, and also did not need large cylinders and compressors. 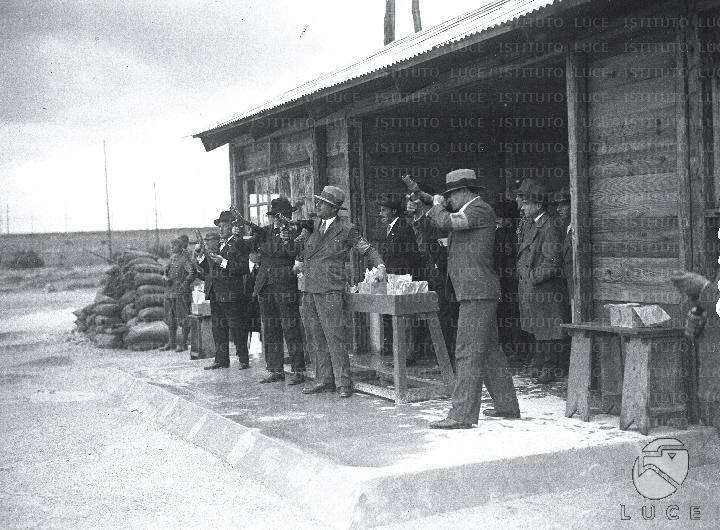 15 firing April 1930 g. On the left you can see the grenade launcher's firing position and its barrel

Thus, in fact, the grenade launcher with the pneumatic principle of throwing shots did not have any real advantages, but it also had a number of serious drawbacks. It is important that it was impossible to get rid of the basic design problems by definition. To simplify production and operation, as well as to mask a new grenade launcher built using pneumatic systems. Such a principle required the use of a set of complex, large and heavy equipment, at a minimum, which impeded the operation of weapons. Alteration of guns for other methods of throwing simply turned out to be impossible.

In its current form, a pneumatic grenade launcher arr. 1930 was not of interest to the army of Italy. Immediately after the test, the project was closed as unnecessary. Probably the only prototype dismantled. Only a few archive photos from 15's April 1930 shooters have survived to our time, including two shots of the assembled grenade launcher and the installation of the magazine.

Under the conditions of the First World War, pneumatic guns, which became widely spread in several warring armies, were an acceptable response to the existing challenges. However, later such a weapon was finally supplanted by gunpowder artillery, which had noticeable advantages over it. Attempts to use the old idea with new technologies did not lead to real results: pneumatic systems again could not show the desired results. As a result, the Italian project grenade launcher arr. 1930 after the test was closed. New light artillery systems had a different look.