In Japan, the tenth litter-class submarine was launched

November 9 2017
26
The Kawasaki Heavy Industries (KHI) plant in Kobe hosted the launching ceremony of the Soryu class naval submarine under construction for the Japanese Self-Defense Forces, reports TSAMTO with reference to Navyrecognition.com. 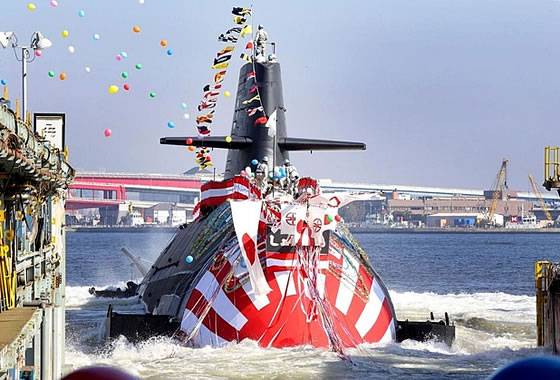 "510" Shoryu "(Shoryu) - 28-I submarine, built at the shipyard Kawasaki Heavy Industries in the postwar period, and 10-I Nasl class" Soryu "(5 built by Kawaski, 5 more - Mitsubishi Heavy Industries)" - says the material.

The boat was laid in January 2015, transferring it the fleet scheduled for March 2018.

It is noted that “equipping with an air-independent power plant allows reducing the visibility of the boat for sonars and being under water for about 14 days, unlike 4-5 days for diesel-electric submarines without a VNEU”. The submarine is also equipped with automated systems and GUS, allowing to increase the efficiency of conducting reconnaissance.

Ctrl Enter
Noticed oshЫbku Highlight text and press. Ctrl + Enter
We are
The main directions of development of the sea self-defense forces of JapanAt the shipyard "Daewoo Shipbuilding", the fourth submarine "Type 214" for the Republic of Korea Navy was launched
Military Reviewin Yandex News
Military Reviewin Google News
26 comments
Information
Dear reader, to leave comments on the publication, you must to register.