November 9 2017
9
The Iraqi Ministry of Defense reported the arrival of another party of three F-16 fighters from the United States at the Balad airbase as part of the contract signed in 2014. According to the ministry, new aircraft will be put into service after the completion of all acceptance procedures.

The company Lockheed Martin 16 December 2014 of the year gave the US Air Force the first two Iraqi-ordered F-16D Fighter Blocks 52 Fighting Falcon for use in training personnel at the Tucson air base (Arison, USA). 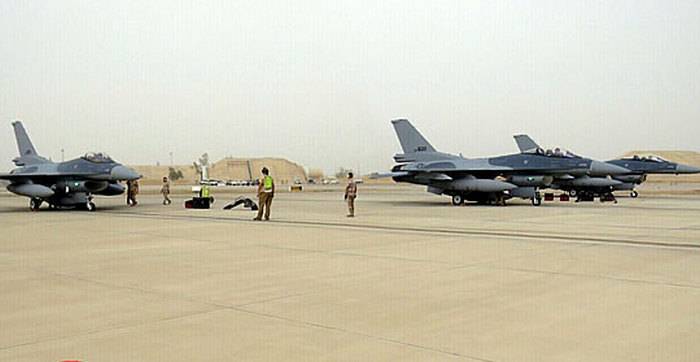 Two aircraft transferred to the Iraqi Air Force were lost in the United States as a result of flight accidents during the training of Iraqi pilots. One of the transferred fighters (bn 1601) crashed 24 June 2015 of the year during an air-refueling exercise. A crash involving the second F-16IQ occurred 5 September 2017. Supposedly, additional planes will be purchased to compensate for the losses.

The United States continues to supply F-16 to the Iraqi Armed Forces amid growing opposition to the central government with Kurdish autonomy. Earlier, the leadership of Iraqi Kurdistan criticized the United States and Baghdad for the use of American weapons against Peshmerga troops, reports TSAMTO.

Ctrl Enter
Noticed oshЫbku Highlight text and press. Ctrl + Enter
We are
Bahrain’s air force will supply X-NUMX Fighter F-16V Viper units worth $ 16 billion.The 20 rating of the largest arms deals, decisions on which were made in 2012
Military Reviewin Yandex News
Military Reviewin Google News
9 comments
Information
Dear reader, to leave comments on the publication, you must to register.