November 9 2017
28
The Syrian army, with the support of the Russian Aerospace Forces, began the liberation of Abu Kemal, the Itria-Hanasser highway has been cleansed of terrorists, reports FAN with reference to Syrian sources. 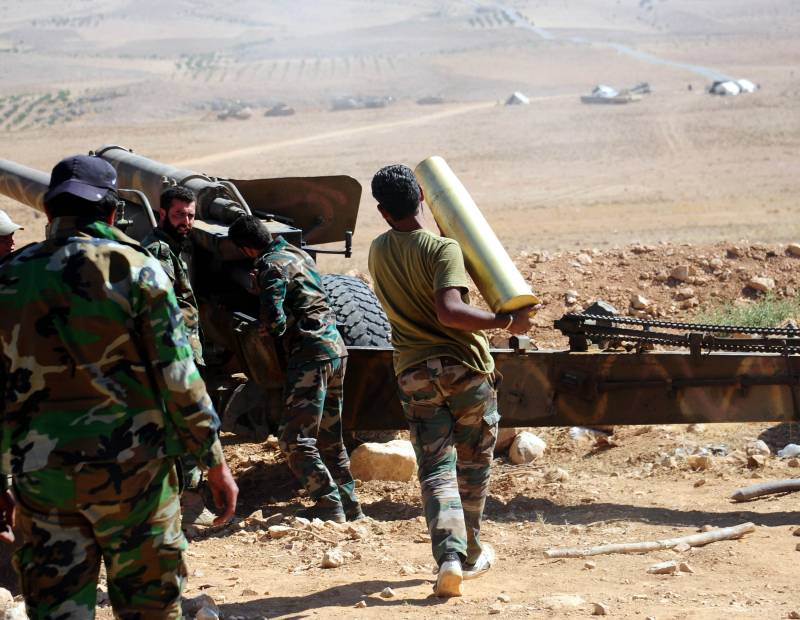 Militants of radical anti-government forces continued to conduct shelling of the Syrian capital. Several civilians in Damascus were seriously injured, including injured children. Government forces fired back at the zones of radical dislocation in the Jobar and Ayn Tarma areas, as well as in the vicinity of Az-Zariqia, Kharasta and Hosh ad-Dawahir settlements. The positions of the militants in the vicinity of settlements Hammuria and Hizza struck the Syrian air force.

The Russian Aerospace Forces conducted a series of attacks on the zones of deployment of the Dzhebkhat al-Nusra terrorists (a group is prohibited in the Russian Federation) in the south of Aleppo province near the city of Hanasser. The Syrian Arab Army (CAA) conducted shelling of the positions of militants of anti-government forces near the settlement of Hayan. The Turkish army conducts artillery shelling of the positions of the Syrian Democratic Forces (SDF) near the village of Jandaris in the north of the province.

Earlier in the day, the news agency Al-Masdar News wrote that he had appointed the commander-in-chief of all units of the Syrian Arab Army (CAA) operating in the province of Deir ez-Zor. The new commander was Mukhkhamed Khaddur, known for his successful counter-offensive against the positions of the IG group (banned in the Russian Federation) on the M-7 highway.

The Russian Aerospace Forces together with the Syrian air forces attacked the zones of deployment of terrorists in the area of ​​the settlement of Al-Quriye (Deir-ez-Zor province). A new batch of military equipment and weapons for the Syrian Democratic Forces (SDF) from the Western coalition arrived in the region.

Government forces with the support of the Russian Aerospace Forces reached the Syrian-Iraqi border. So the CAA and allied forces completely surrounded the IG terrorists in the city of Abu Kemal. At this time, the Syrian Democratic Forces (SDF) were moving towards the settlement of Al-Buseirah, north of Meyadin (Deir ez-Zor province).

One of the local sources in the city of Rakka published on his Facebook page that the fighters of the Syrian Democratic Forces (SDF) are robbing the shops and houses of the administrative center of the region. Previously reported internecine conflicts in the ranks of the Kurdish militia. In the central part of the city, exchanges of fire between the SDF units were recorded. According to local sources, clashes between the Kurds began with controversy around how to divide the property of local residents.

The Syrian Arab Army (CAA) carried out artillery shelling of positions of militants of radical formations in the area of ​​the settlement of Maarakba (Hama province). The Itria-Hanasser highway has been cleansed from the militants of the terrorist coalition. Government forces have thrown the terrorists at An-Nusra 15 kilometers away from the so-called Road of Life.

Ctrl Enter
Noticed oshЫbku Highlight text and press. Ctrl + Enter
We are
Situation in SyriaReports from the militia of New Russia for 13-14 September 2014 of the year
Military Reviewin Yandex News
Military Reviewin Google News
28 comments
Information
Dear reader, to leave comments on the publication, you must to register.