November 10 2017
26
Talk about joining NATO began again in Finland. One of the presidential candidates, Niels Torvalds, calls for joining the North Atlantic Alliance. 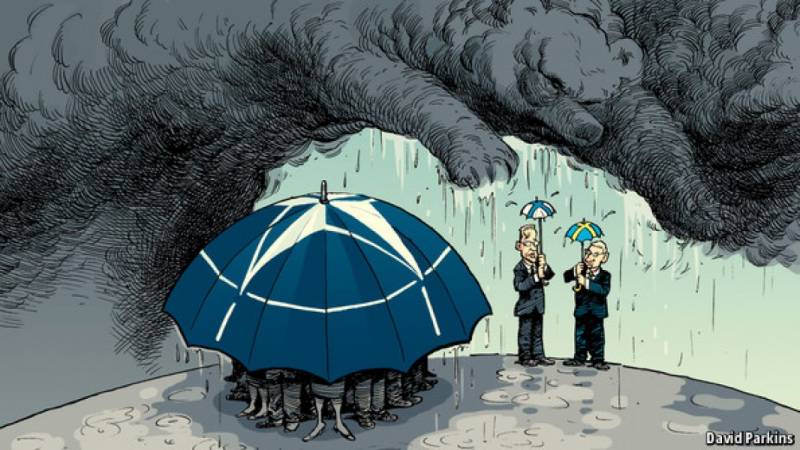 “Fearful of Russia” Finns look to NATO again. Writes about this in the journal "Politico" Reed Standish.

For decades, Finland has "delicately" built relations with Russia, avoiding any steps that could provoke a "sleeping bear," the article notes.

However, now the picture is changing. A well-known diplomat (retired) pushes the country to an obvious risk - that very “threatening beast,” that is, a bear sleeping on the other side of the border.

Hannu Himanen, the Finnish ambassador to Russia before 2016, believes that Finland should join the NATO military alliance. He says: "This country [Finland] deserves open discussion when it comes to foreign and security policy."

Khimanen, who lived for four years in Moscow, convinces his compatriots of the following: it’s time to stop worrying about Russia and start thinking about ensuring our security. To do this, join the Western military alliance.

In a recent book, West or East: Finland and the Return of Geopolitics, Finn criticized domestic leaders, who, he said, avoid outright public debate on foreign policy or are dragging them off. This argument "reinforces the contradictions before the presidential elections, which will be held in January," the article says. And there are signs that Finland is already quite ready for such a debate - not least because one of the candidates supports joining NATO.

Torvalds previously worked in journalism and was a member of the European Parliament. Now he is determined to declare in a loud voice about the “controversial step,” indicates Standish. He is ready to withdraw his homeland "from behind the fence." Finland must become a "true member of the Western military alliance."

“Any discussion of the foreign policy issue in Finland will concern NATO,” Torvalds is sure. “If we do not discuss this now, we will not be able to prepare for this in the future.”

And these are not random words. Finland is slowly drifting towards the NATO membership debate. Voices for the country's entry into the alliance first gained strength "after the annexation of Crimea by Moscow in 2014 and the outbreak of war in Ukraine," writes Standish. Since then, tensions between NATO forces and Russia in the Baltic Sea have only increased. Finland’s neighbors have repeatedly said that their region could be subjected to “regular” aggression on the part of Russia.

And it’s not for nothing that Sweden, the closest military ally of Finland and another non-NATO country, "re-militarized" the remote island of Gotland in the Baltic Sea. This was done for the first time since the end of the Cold War. In addition, Sweden conducted large-scale military exercises with NATO in September.

As for the alliance itself, it deployed four battalion battle groups in Poland, Estonia, Latvia and Lithuania to contain the Russian military machine, the author points out.

Finland, also thinking a lot about defense from its “eastern neighbor,” has invested heavily in defense. Her army is quite large (280.000 people) and is built on a draft basis.

The president in the Finnish state system is not an empty place at all. It is he who, along with the government, is responsible for foreign and defense policy.

And yet, despite heightened security concerns, the public debate on NATO membership cannot be called so broad. The above-mentioned Mr. Himanen attributes this to what he calls the “darkness” of the debatable culture in Finland: when it comes to national security issues, the period is “difficult” stories»Finland with the Soviet Union. After the “two bloody wars with Moscow”, the Finns went through a cold war between East and West, observing a policy of neutrality. This allowed the country to balance integration with Europe and build good relations with Moscow. Such a policy often led to the fact that internal political debates were simply suppressed in Helsinki in order to "satisfy the wishes of a larger neighbor in the east." But after the collapse of the Soviet Union in 1991, Finland “turned sharply” toward the West, joining the European Union and introducing the euro currency.

Alpo Russia, which in 1994 — 1999. served as adviser to the President of Finland, said that at that time NATO membership was discussed. But decision makers believed that they did not need to join the alliance, because the cold war was over, and a new, more secure era had arrived.

Himanen hopes that the current cold relations between Moscow and the West will contribute to more active discussions.

Pekka Haavisto, a Green candidate, said he did not support NATO membership. True, hinting at the openness of this idea, he said that Finland would still have to think about membership if Sweden decided to join the alliance.

Laura Huhtasaari, a right-wing candidate, stands for Finnish independence in defense matters. In an e-mail to the correspondent, she wrote: "At the moment, given the current information, I do not support NATO membership."

The support for the country's entry into NATO among the Finns remains low: about 25% were in favor of this at the end of 2016. At the same time, the number of Finns who have not decided on the issue of joining NATO has increased since the war in Ukraine.

В other material R. Standish indicates that “against the background of concern about Russia,” the Finns are conducting “large-scale military exercises.”

Finland and its neighbor Sweden have focused their defense strategies on neutrality for decades, refusing to participate in major military alliances, reminds the journalist. However, the “annexation of the Crimea and the war in Ukraine in 2014” changed their attitude towards Russia in Northern Europe. Now, watching the “changing environment”, the Finnish Minister of Defense is promoting plans for large-scale military exercises for the 2020 year. And he has already invited to participate in the maneuvers of US forces. Mr Jussi Niinistö said: “In recent years, Finland has been involved in all types of maneuvers. It's time to host your own! ”

Niinistö suggests conducting exercises on Finnish territory. The maneuvers will resemble the Aurora exercises, which took place in Sweden in September, where 19.000 Swedish soldiers were recruited, more than a thousand troops from the United States, France, and the Nordic and Baltic countries. If the plans of the Finnish maneuvers come true, they will become the largest military exercises ever carried out in this country.

“Sweden has stated that it is ready to participate,” said Niinistö.

His statements coincided with the visit of US Secretary of Defense James Mattis to the Finnish capital for a series of bilateral meetings and a two-day summit of the Northern Group (the multilateral defense forum of twelve European countries: Denmark, Estonia, Finland, Germany, Iceland, Latvia, Lithuania, the Netherlands, Norway Poland, Sweden and the United Kingdom).

During discussions of future military exercises and other areas of cooperation at the summit, questions were raised about how to better “respond to Russia's behavior”, which, “besides the war in Ukraine, causes its neighbors to be disturbed by their provocative actions”, including “airspace violations disinformation campaigns and cyber attacks. ” In 2015, the defense ministers of the Northern Group called Russia "the biggest European security issue."

D. Townsend, former Deputy Assistant Secretary of Defense for European and NATO Policy, believes that Mr. Mattis’s visit and meeting with the Northern Group provide a “clear signal” indicating the growing importance of the alliance. “For many years we tried to convince the US Secretary of Defense to go to meetings of the Northern Group,” said Townsend. “And Mattis [in Helsinki] is a sign that now it really matters, and mainly because of the Russians.”

“This is a sign for neighbors, for Russia, and also for the Finnish people, that everything is changing,” added Townsend.

So, Finland, like Sweden, today is increasing defense spending and expanding cooperation with NATO. Both countries have privileged relations with the alliance, including conducting joint military planning and exchanging intelligence. Their armed forces have the technical capabilities to cooperate with NATO.

At the same time, the overwhelming majority of the Finns are not eager to not only join NATO, but even to debate on this topic. The long policy of neutrality has borne fruit: despite the relatively large army, the costs of which are now growing, Finland is used to living in peace with the "bear."

The catalyst for debates about joining NATO can only be a change of sentiment in Sweden: if that state takes a decisive step, then the mood in Finland can also change.