Chicken for Lev Trotsky and his bloody affairs 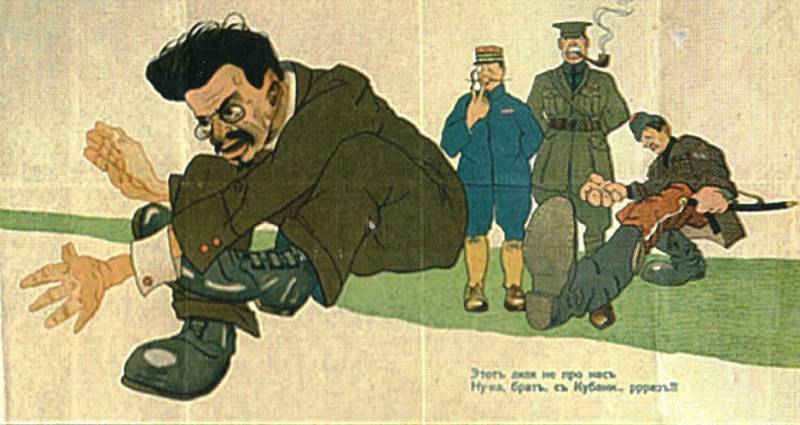 Leon Trotsky (Leyba Bronstein) won himself good laurels in the West. And it was for that. He who shed a lot of human blood during the civil war (he was called “the demon of revolution”), fully paid off with foreign benefactors. And in order to live comfortably after leaving the USSR, he gave the US authorities a unique party archive.

We have such clichés as "Trotskyism" and "work for foreign intelligence" are perceived as bursts of Stalin's paranoia. In fact, everything was much more prosaic ...

Trotsky has been engaged in subversive activity since the beginning of the 20th century. He acted on a couple with Alexander Parvus (Gelfand), a German social democrat and the largest entrepreneur who traded food and weapons. In the 1905 year, Parvus, using his finances and connections, promoted Trotsky as deputy chairman of the St. Petersburg Council (he himself became a member of the executive committee of this body). At the same time, under the auspices of the Council, a “Financial Manifesto” was issued, in which the population of Russia was urged to undermine the Russian ruble in every way.

It is easy to guess in whose interests these people acted. Soon they were arrested and sentenced to exile; but they managed to escape.

In Europe, Trotsky also managed to appear, and with the outbreak of the First World War he was expelled from Paris as a German agent. Maybe not in vain: he, like Lenin, received money from the German General Staff and from the bankers of New York. Trotsky was closely associated with foreign tycoons, in particular through his uncle, Stockholm banker Abram Zhivotovsky, who collaborated with the powerful banking house Kuhn, Loeb & Co. And the head of this house, Jacob Schiff, did a lot for the victory of the revolution in Russia.
In any case, from New York, Trotsky, who had an American passport issued personally by President Woodrow Wilson (with attached visas for entry into Russia), in March 1917-th came to Petrograd and immediately immediately joined the revolution.

The culmination of the career of Trotsky - the post of chairman of the Revolutionary Military Council and Commissar for Military and Naval Affairs, leading the five millionth army. His popularity as a “second leader of the revolution” in those years was enormous, as was the food ration. Trotsky in his train, traveling around the expanses of civil war and terrible famine in the country, daily delivered chicken, oil, fresh greens: the brain of a revolutionary romance needed good nutrition.

And, I must say, the brain responded accordingly: Trotsky dealt with enemies with a special skill. It was he who was the author of the bloody order about “raskazachivanii” - the universal extermination of all the Cossacks who did not support the Soviet government. When the Cossack uprisings began on the Don, the implementation of Trotsky's directives - to burn the insurgent villages, take hostages, shoot every tenth, or even every fifth man - did not help. The demon of the revolution had to rush to the southern front himself, where he arranged for the commandment, accusing him of “criminal red tape”.

Why should the Cossacks be destroyed?

And soon Trotsky issues order No. 100: “The nests of dishonest traitors and traitors must be destroyed. Cains must be exterminated. No mercy for the stanitsas who will resist. " In addition, he telegraphs to his deputy Efraim Sklyansky in Moscow a proposal to consider the use of "asphyxiated gases". As Lev Davidovich said, “the Cossacks are the only part of the Russian nation capable of self-organization. For this reason, they must be destroyed by the polls ... This is a kind of zoological environment, and nothing more ... A cleansing flame must pass through the whole Don and bring fear and almost religious horror on all of them ... Let their last remnants be like evangelical pigs will be dumped into the Black Sea ... "

Trotsky did everything to war dragged on as far as possible. So, in the spring of 1919 of the year, the People's Commissariat of Defense has thrown many of the red units in the direction of the Carpathians - to support the Hungarian Soviet Republic, instead of using them on the front. And what was the value of his idea that the center of the world revolution now needs to be moved from Russia to India, where the corps of 30-40 thousands of horsemen should be thrown.

Benefactor of the company “Nidqvist and Holm”

Later, becoming the People's Commissar of Communications, he made a deal that is very profitable for Western financiers. It was under his leadership that steam locomotives were purchased in Sweden at a factory owned by Nidquist and Holm. The Soviet side ordered 1000 locomotives worth 200 million gold rubles (about a quarter of the country's gold reserves). At the same time, the production capacity of the company did not allow the production of such a number of machines. However, the Swedish company received not only an advance in 7 million Swedish crowns, but also an interest-free loan in 10 million crowns. In other words, the money was paid, but there was no product. Thus, Trotsky also financed the Western democracies ...

Ctrl Enter
Noticed oshЫbku Highlight text and press. Ctrl + Enter
We are
Father toldThe myth of the irreproachable knight of the revolution Trotsky
39 comments
Information
Dear reader, to leave comments on the publication, you must to register.