Sergey Chernyakhovsky: Lenin won because he felt what millions want

November 9 2017
51
From the editors of KM.RU. Talking about the October Revolution, or, if you will, the October Revolution (does not contradict one another) will, of course, be incomplete without a discussion of the phenomenon of Vladimir Ulyanov (Lenin). Genius or villain (“the main political criminal of the twentieth century,” according to Vladimir Zhirinovsky’s terminology), destroyer or creator, creator of “the world's first state of workers and peasants” or bloody executioner - the forerunner of Stalin, Jew and Mason or head of the World International - and this is only few topics for eternal debates about the role of Vladimir Ilyich’s personality in stories. Discussions about him if they are inferior in intensity, then only disputes about Stalin. It is virtually impossible to treat him indifferently, and this means that he left his mark in world history. What is this trail? Everyone has their own opinion. The political scientist Sergey Chernyakhovsky has one. 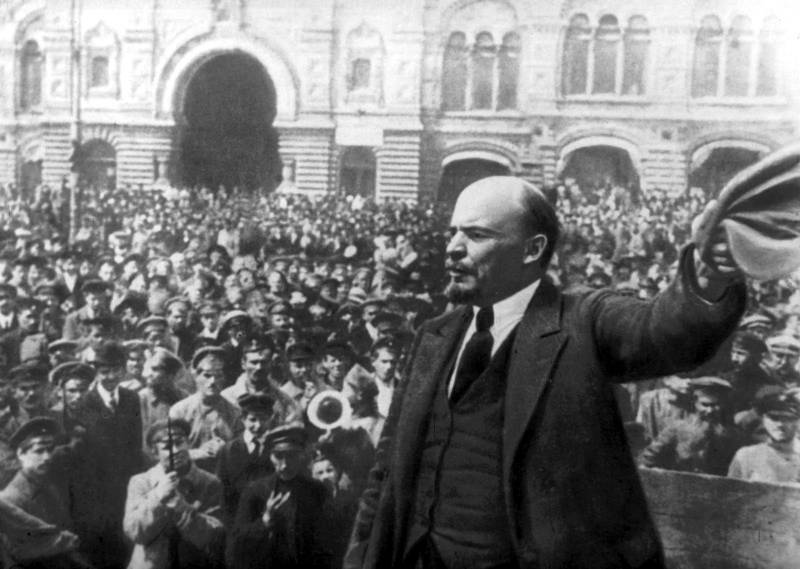 Lenin, of course, is the central figure of October 1917 of the year, although not only him. With all the fluctuations of public opinion, his role and personality and today cause a positive attitude among far more people than a negative one.

Five years ago, 48% of Russian citizens spoke of its positive role in history, 30% spoke about its negative role. At that, only six years ago, the ratio was different: with the plus sign of Lenin, then 40% was evaluated, and with the minus sign - 36%. That is, his figure and role are positively assessed not only by the majority, but by the growing majority of the population, while his opponents are not just a minority, but diminishing.

And all these figures, we note, are obtained in the present era, when not a single memorable date passes without the media filling out the broadcast in one way or another with negative assessments of the role and personality of Vladimir Ilyich.

As for how he is estimated in the world, according to the catalog of the Library of the US Congress, Lenin ranks third among historical figures in the number of monographs devoted to him. Only two people are ahead of him - Marx and Kant. Although, however, it is unlikely to fully reflect the impact that he himself had on the world.
The scale of his personality can hardly be in doubt for anyone who at least partially remains in positions of minimal sobriety of assessments. Hence all the curses in his address.

There are two main accusations against Lenin: the first is “the German spy”, the second is “the destroyer of the Russian traditional way of life”.

The first statement is not only not confirmed by anything intelligible and remains at the level of maxims in the spirit of NTV and Echo of Moscow, but simply absurdly. The role of the spy is too inconsistent with the scale of what was done by him, both of what was destroyed and what was created.

The petty accusation only proves that those who hate him do not have the courage to say why they hate him, just as there are no arguments comparable to the scale of a person’s personality that predetermined the course of the history of the world in the twentieth and most likely in the twenty-first century. For some, he is the people's leader and the largest political theorist, for others he is a hated villain.

If we move away from assessments caused by political sympathies or antipathies, then let's speculate: who is Lenin after all? What did he do and what could he do?

Lenin is undoubtedly the most successful political figure of the twentieth century, and, most likely, of almost the entire history. He caught and realized the trends in the world in his era, took power in a huge country, kept it with fierce resistance from those who are called "overthrown classes", created a new statehood, laid the foundations of the new economy and the new national and world project. And despite the fact that, in reality, he remained in power for a little over four years.

Moreover, he really practically changed the world, because after October 1917, the world could no longer be what it was before. He destroyed the old, obviously outdated, device of the modern world and opened the way for the search and construction of the new. Not only in Russia - all over the world. That is, he was undoubtedly the most successful, and the most ambitious of all political strategists of history.

He created such an effective and professional political organization that it was able to defeat not only direct opponents (the guard structures of the old empire), but also competitors (other political parties of then-Russia that are far from being as amorphous as political parties of modern Russia). It is not even important that this party was able to overthrow the old government and keep the government in its hands, but that this party itself was created as a kind of proto-state structure that could become the backbone of the new statehood after the old one had practically broken up; and as soon as this structure was destroyed in 90, the state itself collapsed.

The electrification plan was adopted in 1920, but electrification becomes a priority of the revolutionary government during the years of the Civil War: in 1918, Lenin accepted the Graftio plan for the construction of the Volkhov hydropower station, and in 1919, they began to build the Kashira power plant. In the spring of 1919, Lenin resumes the abandoned construction of the Shaturskaya TPP ... And the listing of what the 1917 of the year began to build and build after October can be multiplied and multiplied.

Issues of organization of production - this is what was in the center of attention, and what its activities were directed at. To organize a new production meant to make Russia a technically advanced country in the world, not to mention the fact that at the same time working on these tasks, he was able to first repel external military intervention (aggression) of at least 15 powers, including the most powerful, and then force the leaders of the western world who won the World War, to accept the conditions of existence, dictated by the leader of the Russian revolution.

Why did it succeed? What was his strength? In colossal empathy - and social, and historical, and political.

Lenin turned out to be intellectually stronger than Russian liberals and Russian Westernizers, having managed to find the forces and the path that could solve modernization problems without destroying the basic value characteristics of a country's task - to be able to preserve Russia's traditional priority of justice over rationality.

He turned out to be intellectually stronger than the Slavophiles, managing to understand that it is impossible to ensure the preservation of the priorities of justice without combining them with rationality and technocracy.

The land question in general must be solved not by a socialist, but also by a bourgeois revolution. In France, the allotment of land to peasants was carried out by the revolution of 1789-93. and Napoleon.

Theoretically, if the imperial power was responsible and adequate, it could and should have solved this task long before 1917. And even more so the first Provisional Government was to solve this problem immediately after the February revolution. And all the more so the government of Kerensky had to decide it, because the resolution of the agrarian question was the main demand of his party. As he will say later, in October, Lenin: “What is this party that had to be overthrown in order to carry out its program?”

Lenin won because all the time he felt what millions want. He knew that the distribution of land to the peasants was not a socialist revolution, but the most radical development of capitalism in the countryside. But he knew that the Russian peasants wanted it, and therefore it must be done, because its main strength is in their support, and since it is much more progressive than what it was in Russia before.

By the way, even Stolypin, now fashionable, he reproached not so much for the direction of his actions, as for their inconsistency, and wrote that he was leading Russia along a progressive path, but in the most reactionary way.

Why did the Social Revolutionaries and Kerensky fail to resolve the question of the land and execute their own program, but could he? Not only because the first did not have enough determination, but because they always offered to wait. To wait until the elections to the Constituent Assembly are held, which they themselves also delayed as much as possible; wait for it to make the necessary laws; wait until the land cadastre is compiled; to wait for the surveyors to be prepared in the required number, - and so on to infinity.

Lenin knew that to behave this way towards the peasants meant to mock them and arouse their hatred. And he made it easier - he passed a decree in which he declared: “The earth is yours in perpetual use. Buybacks are canceled. Get organized and take it into your own hands. ”

Those who accuse him of enmity towards everything Russian and of destroying the Russian way of life simply cannot clearly say that they mean it, or they mean only the world of the possessing estates and autocratic courtiers, although it is in them This time was already a minimum of Russian.

The Russian world, the Russian way of life and the Russian mentality lived in those who worked - in the peasants, in the workers, in the Russian engineers. And with all the accusations of churches closing down and persecuting priests, it was the alienation of the latter from the Russian people that caused their alienation from them.

It can be said that Lenin broke into this world from the future in order, like Peter the Great, to reintroduce not only Russia, but all of humanity. It is possible with no less reason to assert that this world itself, faced with its own inability to solve its problems, gave birth to and called on Lenin to rise with his help to a new stage of development.

In any case, it is clear that the impact they have on the world and modern civilization is enormous and almost incomparable with the influence of any other politician. Boris Strugatsky once clearly defined the role of Lenin, saying that he practically created a new world.

As long as there are people who scold Lenin, it only means that they fear and hate him. Some - because of fear for the privileges assigned to them, others - because they feel his personal superiority that is unattainable for them.

Hatred of Lenin is only a manifestation of a sense of self-psychological complex-mindedness and envy of those who feel that they are unable to stand on a par with him.

Yes, and also: the first Russian Constitution was given to the people in 1918 after all by Lenin too.

Ctrl Enter
Noticed oshЫbku Highlight text and press. Ctrl + Enter
We are
About Stalin and KhrushchevWhat you didn't want to know about England
Military Reviewin Yandex News
Military Reviewin Google News
51 comment
Information
Dear reader, to leave comments on the publication, you must to register.