Media: Arab coalition has launched a series of attacks on Yemen

November 8 2017
13
The Arab coalition, led by Saudi Arabia, launched a series of strikes against the north of Yemen, killing more than a dozen field commanders of insurgents from the Ansar Allah movement (the Hussites), the Arab satellite television channel said on Wednesday Sky News Arabia


According to the channel, as a result of the attack on the Nahm area east of the capital of Sanaa, 11 rebels, who were involved in the creation of missiles and other weapons, were killed. In addition, coalition planes carried out 12 raids on a rebel military camp in the Hajja province in the north-west of the country, killing 50 people. The city of Saad, which is considered a stronghold of the Hussites, has also been bombarded. 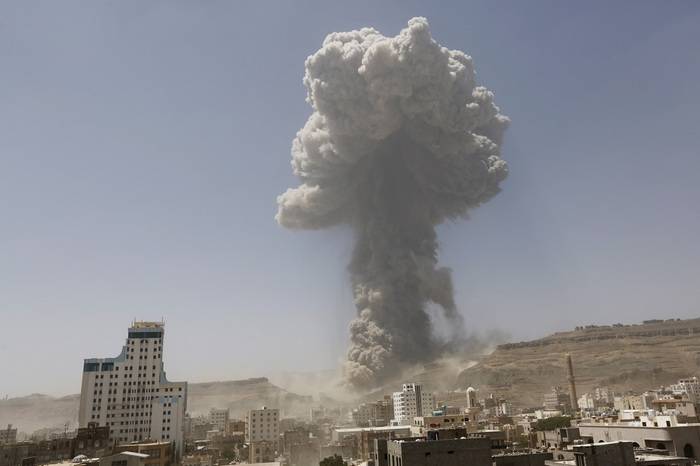 The Arab coalition began intensive bombing of the Hussite positions after a week ago they launched a ballistic missile in the direction of Riyadh. Saudi air defense forces shot down a rocket, its debris fell near the capital's airport, without causing casualties and destruction. There was no disruption to the airport. Hushits said that the launch of the rocket was a response to the massive coalition bombing of Sana'a and other cities in the north of Yemen by the Arab coalition.

Neighboring with Saudi Arabia, Yemen has been steeped in internal conflict since 2014. On the one hand, the Hussites from the Shiite Ansar Alla movement and a part of the army loyal to former President Ali Abdullah Saleh participate in the conflict, and on the other hand government troops and militia loyal to President Abd Rabba Mansur Hadi. Since 2015, the Arab coalition led by Saudi Arabia has been providing military support to pro-government forces. It is believed that the Hussites who control the capital of Yemen and a significant territory of the country, Iran provides covert support, RIA News

Ctrl Enter
Noticed oshЫbku Highlight text and press. Ctrl + Enter
We are
The situation in Syria on Google Earth satellite imagesDetonator of the future cataclysm in the Middle East
Military Reviewin Yandex News
Military Reviewin Google News
13 comments
Information
Dear reader, to leave comments on the publication, you must to register.