Western experts were looking for Putin’s savings offshore, but found the money of their companies

November 9 2017
21
On Sunday, the Süddeutsche Zeitung newspaper from German Bavaria launched a new offshore scandal called the Paradise Dossier. A few months ago, secret newspapers were made available to the newspaper, which documented the activities of dozens of companies and individuals in small countries or in territories with a preferential tax regime - the so-called offshore companies. The participants of the International Consortium of Investigative Journalism (ICIJ), whom the newspaper attracted to the analysis of the materials received, drew an analogy of offshore companies with “paradise territories”. So this unusual name of the new dossier appeared. 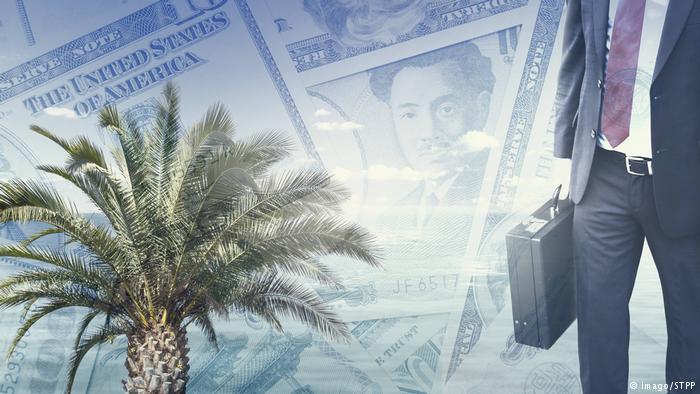 It is impressive. According to the Süddeutsche Zeitung, the dossier was based on a leak of 21, which gives an idea of ​​working in 19 offshore jurisdictions, 13,4 of a million documents. To analyze the information received, the ICIJ consortium attracted journalists from 400 countries around 67. However, working with documents took several months. On Sunday, she began to acquaint the world community.

This is not the first exposure of firms and personalities hiding their money in offshore oases. Last year, the Panama Dossier made a lot of noise. Then more than a million documents for internal use were registered in Panama law firm Mossack Fonseca.

This is how data on 140 offshore accounts of politicians and civil servants, including world leaders, was opened. The Western press excitedly wrote about tax evasion from "representatives of kleptocratic regimes: from Russia and Africa to China." Nobody hid the fact that the leak itself was arranged in order to find “Vladimir Putin’s billions”.

Gossip about his condition appeared shortly after Putin’s Munich speech in 2007. Talked about the amount of the order of 40 billion dollars. For the elections, they tried to present this money to the Russian and world public. However, no one found the accounts of the Russian president. Opened only offshore история in 2 billion dollars worth of famous cellist Sergei Roldugin.

Roldugina media directly associated with the president of Russia. According to the British Guardian, Sergey Roldugin is a close friend of Vladimir Putin. "He introduced Putin to his future wife, Lyudmila, and became the godfather of his eldest daughter, Maria." On this basis, the newspaper concluded that in fact the funds assigned to the musician belong to Vladimir Putin.

Roldugin tried to explain the origin of money. He even told how at his own expense he buys unique musical instruments for the state collection. But no one listened to him. Newspapers still practiced variations on how “Putin's money in offshore is kept in the accounts of nominees” (cited as an example the names of other well-known Russian businessmen), but soon exhausted.

The assumptions about Putin’s money have overshadowed the real facts about the accounts of the President of Ukraine, Petro Poroshenko, the Prime Minister of Iceland, Sigmündür Gunnleigsson (along with a whole group of Icelandic officials, bankers and businessmen, including the Minister of Finance and the Minister of the Interior), British Prime Minister David Cameron and another ten world leaders.

Cameron soon resigned, lost their posts and Icelandic ministers, along with his prime minister. West Methyl in Putin, but actually he burned himself on offshore fraud. The media soon became eager to explain that tax evasion was actually a legitimate action. But government officials cannot use these schemes. The topic was quietly lowered on the brakes.

Offshore money - instead of the European budget

“Paradise dossier” is also trying to connect with the Russian president. All this looks even less convincing than in the Panamanian documents. Russians who came under the distribution (Igor Shuvalov, Arkady and Boris Rotenberg, Oleg Deripaska, Roman Abramovich, Alisher Usmanov, Marina Sechina, Putin's fellow student Nikolai Egorov, and others) are convicted of having registered their own aircraft in offshore. Even Western experts do not consider this a serious violation, but merely a convenient form for using jets.

“Russian footprint” is now cleared at the US Commerce Secretary Wilbur Ross. In the Panama Dossier, there were no American citizens at all. Although in tax evasion even people who were far from business, like Argentinian footballer Lionel Messiah, Hong Kong actor Jackie Chan, Spanish director Pedro Almadovar, and others, were hooked on taxes.

Wilbur Ross, according to Süddeutsche Zeitung, through a network of offshore companies registered in the Cayman Islands, is connected with the UK-registered shipping company Navigator, which in turn fulfills orders from the Russian petrochemical holding Sibur for the transport of liquefied gas.

That's it. They caught the minister on the most serious crime for America today - cooperation with the Russians. Knowing this, the German newspaper was no longer shy and finished off Ross with the headline of the article “Trump's minister makes money on deals with Russia”. At the same time, SZ went through the American president. Let now justifies himself as Roldugin for Putin.

There is another reason for Trump to not relax. The Bavarian newspaper devoted a separate article to the Russian investor Yuri Milner. He had the good fortune to acquire large stakes in social networking sites like Facebook and Twitter. For this transaction, according to the newspaper, Milner took money from VTB Bank and Gazprom, which, as German analysts think, cannot be done without direct support from the Kremlin.

So what awaits Trump now is not just cyberwar and Russian hacker attacks, but Putin’s full control over American social networks. However, this story is not entirely European. Especially against the background of information on tax evasion of companies of the European Union itself. There is a lot of interesting things showing that kleptocracy has taken root not only in “regimes: from Russia and Africa to China”.

Analyzing the “Paradise dossier”, Süddeutsche Zeitung comes to the conclusion that the European Union annually loses 60 billion euros in corporate income taxes due to the fact that international concerns are registered in tax havens - offshore. This is about one-fifth of all corporate tax deductions in the EU.

The newspaper refers to the calculations of the French economist Gabriel Zuckman. He estimated Germany’s losses at 17 billion euros - almost a third of the corporate income tax collected in the country. France could get more tax percent from its companies on 25 than it does now, the UK - on 20 percent.

It is strange that the Bavarian newspaper is surprised by this. After all, global business hasn’t set up tax oases not for enterprising Russians and other Africans and Chinese. By the way, the “Paradise Dossier” again paid little attention to American corporations, but noted a very characteristic detail.

Europeans hide their incomes not on some exotic ocean islands, but directly on their native continent. Germany, for example, loses most of its potential corporate tax revenues (up to about two-thirds) in offshores within the European Union - the Netherlands, Ireland or Luxembourg.

In this connection, the proposal of the Minister of Finance of the Federal Republic of Germany Peter Altmaier, made on Tuesday in Brussels, looks rather strange. According to Deutsche Welle, Altmeier called on his colleagues to settle until the next meeting of EU finance ministers scheduled for December 5, “all the conditions and issues related to the publication of a black list, which countries and territories that do not adhere to basic tax control standards should enter ".

The offer is strange because everyone knows about European offshore without a black list. They began talking about them immediately after the publication of the Panama Dossier, but the matter did not get further. Now the discussion is on the second round. French Finance Minister Bruno Le May even suggested to the International Monetary Fund and the World Bank to stop financial support of states that refused to cooperate internationally in the fight against tax evasion.

However, the Frenchman immediately responded from Luxembourg. The head of the Ministry of Finance Pierre Gramenya objected to a reduction in international investment. “Inclusion in the blacklist will in itself be a rather severe punishment,” noted Gramenya. So, since the decisions in the European Union are taken by consensus, it is unlikely that further progress will be made further talk.

What Europeans really agree on is searching for Vladimir Putin’s billions. They are aggressively sought. But they only find their money, illegally hidden in tax havens - offshore. The publication of the Paradise Dossier documents continues. The press flashed information about the dubious financial operations of US Secretary of State Rex Tillerson, the British Queen Elizabeth II, and other people known to the world. It is becoming more and more interesting ...