Russia ranked first in the world in the number of tanks, infantry fighting vehicles and RZSO

November 8 2017
73
More than 25 thousand units of new armored and automotive equipment, 4 thousand modern models of missile and artillery weapons were delivered to the Armed Forces of the Russian Federation from 2012 to 2017, which allowed Russia to take first place in the world in terms of quantity tanks, infantry fighting vehicles (BMPs) and multiple launch rocket systems (MLRS), said Army Deputy Secretary General Dmitry Bulgakov. 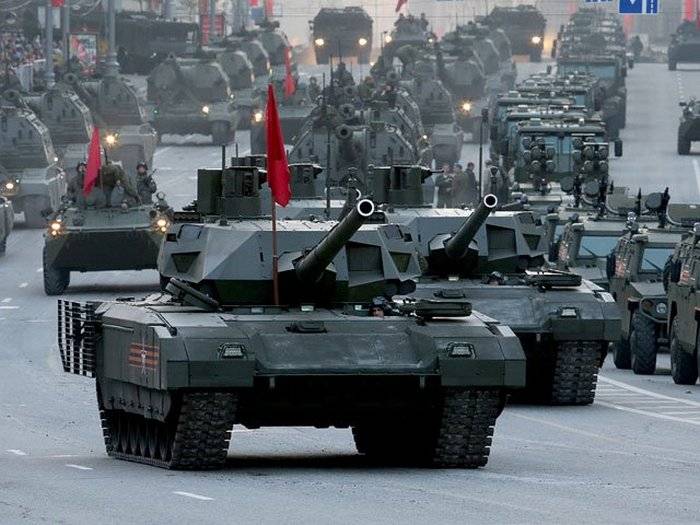 Over the five-year period, from 2012 to 2017 a year, more than 25 thousands of units of armored and motor vehicles and 4 thousands of modern missile and artillery weapons were delivered to the troops, which allowed the Russian Federation to take the first place in the world in the number of tanks, infantry fighting vehicles and RSZO
- Bulgakov said in an interview with the official publication of the Russian Ministry of Defense - the newspaper "Krasnaya Zvezda"

According to him, more than 80 samples of modern technology have been adopted over the years.

I mean rocket and artillery armament, tanks, automobiles, equipment of rear services. Today, the share of modern weapons and military equipment in the fixed nomenclature is already more than 50%
- clarified the army general.

At the same time, Bulgakov noted that the equipment listed by him was ready for use.

The enterprises of the military-industrial complex and the regular repair and restoration bodies, which is also important, brought the level of serviceability of the equipment to 98%. Everything in our army is on the move, everything is ready for use as intended
- He assured.