Everyone urgently hide under the bed!

November 9 2017
13
Recently, the US published a regular annual report on public diplomacy and international broadcasting. The paper focuses on American global influence using “soft power”. Obviously, Washington does not intend to abandon the concept of a "unipolar world." In the meantime, mad lists of “experts” of the channel “RT” are being compiled in the USA, where even notorious Russophobes have been sent. We would not be surprised if near the name of Lindsay Graham there will soon appear the name of his associate John McCain, the famous “friend of Russia”. 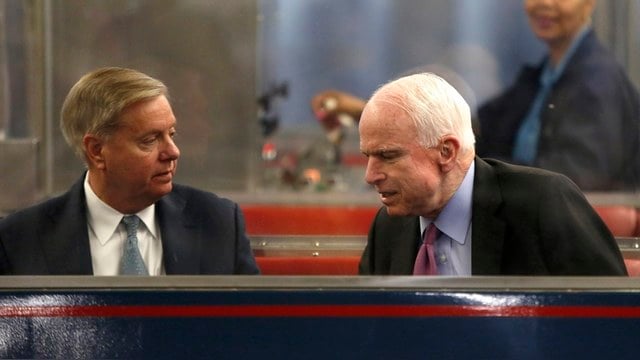 The new report was published by the Public Diplomacy Commission at the US State Department. In the report, as noted "Life", the US public diplomacy is detailed in terms of its transformation into a tool of “soft power”. The wording suggests that Washington still considers public diplomacy as a means to form a unipolar world.

The instruments of public diplomacy in the United States are the institutions of the executive and legislative branches, their programs, the academic community and NGOs. When implementing cultural and educational programs, the political component is an integral part of them, the report indicates.

Public Diplomacy State Department officials understood as a foreign broadcasting, which is responsible for the BBG (Broadcasting Board of Governors US) consular programs, educational and cultural exchanges, assistance programs Europe, Eurasia and Central Asia, and others.

Russia belongs to the Europe and Eurasia group. On the implementation of the respective public diplomacy programs stands "on the ground" 170,7 million Breakdown of funds for the group of countries "Europe and Eurasia" looked at 2016 year as follows: US $ 67,7 million - on the diplomatic and consular programs for public diplomacy, 23,6 million..... USD -. remuneration of persons who are in the US contentment, 27 million -.. money to support funds (program assistance to Europe, Eurasia and Central Asia, funds of economic assistance, emergency operations abroad), and finally to $ 52,34 million.. - on the BBG line.

As indicated by "Life", the US Senate Committee on Appropriations has requested an increase in the future budget "Voice of America" ​​on USD and USD million 33 24 million - «Radio Free Europe / Radio Liberty» ( «Liberty»)..... Senators expressed support for countering “aggressive disinformation and Russian propaganda.” The Senate Committee urges BBG to continue multimedia pressure on Russia.

Against the background of American pressure on RT and Sputnik, the Russian Ministry of Justice has already sent a warning letter to the American media mentioned above: if restrictive measures are applied, Russia will react mirror-like.

Last year, we recall, the aforementioned US Broadcasting Board of Governors spent 750 million dollars to complete its tasks. This is the data for 2016 from the recently published report is no longer the State Department, but the BBG itself. “The only mission is to inform, attract and unite people all over the world in support of freedom and democracy,” this is how the main goal of this government agency was stated in the BBN 2016 report.

Five media structures are accountable to the BBG: Voice of America and Freedom are broadcast to Russia; to Cuba - “Marti”; to Iran - MBN, to North Korea and China - RFA. “These are the main regions where the US faces opposition from national elites, where national elites occupy their own national policy and pursue a policy in the interests of the national state of their state, and not in the interests of America. That is why active American propaganda is being carried out on the territory of these states, ”said Channel One Pavel Danilin, director of the Center for Political Analysis.

Recall that the BBG is funded by the programs of the US Congress, reports to the president, and takes money from the pockets of taxpayers. That is, Americans generously pay for the US Department of State, through its "independent" media, to explain the "party policy" abroad. At the same time, explaining the policy of the other party, that is, serving in the US news on behalf of Russia, is forbidden. This is evidenced by the fact of the prolonged scandal with the Russian channel “RT”, to which Washington puts sticks in the wheels.

Why would the United States need to register "RT" as an "agent of the Russian government"? Why does the US not require appropriate registration from other foreign state media? N. Pisnya tried to answer this question on the Russian service website. "BBC".

According to Margarita Simonyan, RT was demanded to register as an agent of a foreign state, and the US Department of Justice did not confirm this requirement and did not refute it.

In the United States, there is the FARA (Foreign Agents Registration Act), a law passed at the time to combat Nazi propaganda. In 1960, after the Caribbean crisis, it was turned into a tool to control international lobbying. From people and organizations under the control of foreign governments or receiving money from them, the United States requires compulsory registration with the Ministry of Justice as “agents” of foreign states. "The agent of the Kremlin" under this law should mark its materials with a special note: "The product of the agent of a foreign state." Of course, the US government does not require the closure of "RT": press freedom in is protected by the First Amendment.

Precedents with "agents" in stories there are: in 1940, TASS, Pravda and Izvestia newspapers recognized themselves as agents of the Soviet government. The list is not that short: there are fifteen companies listed on the FARA website that were “agents”. There are Intourist, Vneshposyltorg, and Vneshombank. However, the registration of most of them expired in the 1990-s.

Lata Nott, an expert of the Institute of the Newseum, speaks of «RT»: "If we talk about« RT », not all of them are propaganda materials, but they can be traced only one feed angle, there is no criticism of their own government. They lack openness not only with regard to news, but also with regard to the sources of funding. ”

Margarita Simonyan, whose words are "Bi-bi-si", said that in accordance with US law, "RT America" ​​is not a foreign agent, as used by the US commercial organization for its broadcasts. "

A different opinion from the former Director of National Intelligence, James Clapper. He called "RT" the mouthpiece of Russian state propaganda, whose means and leadership are in close proximity to Putin.

Approximately the same is said by experts from Washington think tanks: the Brookings Institute and the Atlantic Council. Since 2013, they have called “RT” one of the most powerful weapons of Russian propaganda.

The activity in the USA of both “RT” and the “Sputnik” channel may be the subject of several investigations about Russia's possible interference in the course of the American elections, which are held by Special Prosecutor Robert Muller III, the Senate and Congress intelligence committees.

What follow inquiries actions, while difficult to judge. In any case, they do not plan to “close” in the USA “RT”. The attack on the throat of the First Amendment is difficult to imagine in the days of the Internet. However, another kind of offensive is already underway, and very active.

In October, 2017, the Twitter company, shot an ad for RT and Sputnik. The decision was made on the grounds that the Russian media allegedly at the request of the Kremlin interfered in the course of American presidential elections, reports "First channel".

The following is also interesting: the money that “RT” and “Sputnik” paid for advertising (almost two million dollars) will not be returned to them. At least, Channel One informs that these funds will be spent "on some research work."

The chief editor of "RT", the chief editor of "Sputnik" Margarita Simonyan says: "We didn’t want to believe to the last that it would be like this, that American social networks, in this case, Twitter, will directly refer to the CIA report in order to hinder us in work, but it happened today. Before that, when someone said that the CIA controls them all, it caused us to smile. Now we no longer smile, this is all, of course, has passed all boundaries and it was not funny. It remains only to regret that Russia will obviously be forced to take retaliatory measures. ”

It got to the point where the European Values ​​Research Center, which is accountable to Soros, released a report listing the names of experts and guests of the channel “RT”, who “give legitimacy to Kremlin propaganda”. The report caused a poisonous smile from experts. Daniel McAdams, executive director of the Ron Paul Institute for Peace and Prosperity, was horrified:

“This, of course, horrified me. It turns out that the conspiracy is much bigger than it seemed. I looked at the names on this list. It turns out that people like Dick Cheney, Joseph Lieberman, Lindsay Graham, Michael Morell are among the so-called “useful idiots” of the Kremlin. Russian agents in the higher echelons of American power, they were found even among the main Russophobes! Horror of some kind, everyone urgently hiding under the bed! I am not going to defend RT and Russia, but I will defend the right of access to different views and ideas. ”

Mcadams in his "horror", we note, the rights to 99 percent. In fact, McCain's buddies are on the list of "propagandists"! It lacks the most distinguished senators. It is strange that the experts of Soros did not include him there. We will give them a hint: in 2013, he publicly, in the Russian press (!), Declared the greatness of the Russian people and even called himself a “pro-Russian” politician. “I believe in the greatness of the Russian people and their desire to live in a society of justice, open opportunities and have a government worthy of their aspirations and sacrifices,” McCain wrote on the website Pravda.ru. He added: “I am not anti-Russian. I am pro-Russian, more pro-Russian than the regime that controls you badly today. ”

Everyone urgently hide under the bed!

Observed and commented on Oleg Chuvakin
- especially for topwar.ru
Ctrl Enter
Noticed oshЫbku Highlight text and press. Ctrl + Enter
We are
Situational analysis of the death of the MH17 flight (Malaysian Boeing 777), made on the basis of engineering analysis from 15.08.2014Strangulation: the context, conduct and consequences of the American naval blockade of China
Military Reviewin Yandex News
Military Reviewin Google News
13 comments
Information
Dear reader, to leave comments on the publication, you must sign in.