November 9 2017
46
Over the past few years, a huge amount of accolades about the Bushmaster ACR machine has appeared. it weapon is an excellent example of the implementation of a modular design that allows not only changing the class of weapons by replacing individual parts, but also changing ammunition in a matter of minutes without special tools.


In general, calling the Bushmaster ACR weapon is not entirely correct. The fact is that such a name is applicable only to the civilian version of this product, and since more people have access to civilian weapons, the name of the weapon has accordingly taken root. The weapon variant for the military has the designation Remington ACR, and initially the machine gun was generally referred to as Magpul Masada ACWS.

Let's try to understand this confusion.

How did the machine Remington ACR (Bushmaster ACR)

It all started with the fact that Magpul decided to improve the design of the M16 to facilitate the maintenance of weapons, but everything grew into a more serious project, at least this version, which was followed in the company. 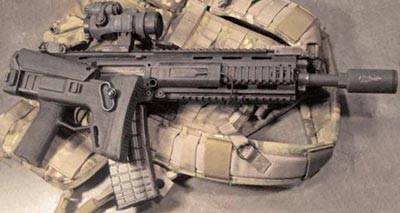 In principle, this can be believed, as each person has come across a situation where the desire to improve something leads to the fact that you begin to understand the imperfection of individual nodes and how easy it is to eliminate other shortcomings that you did not pay attention to before. Do not fit in this stories Only one thing - through 4 a month after the start of the project, a new fully viable product was presented, ready for mass production.

It is possible, and this is only my guess, and not a fact. Magpul already had significant achievements in terms of new weapons, but there was not enough financial resources to complete the work. In this regard, I repeat once again, it may be that the money was taken to update the M16, which is a very promising direction in terms of return on profit, but this money was sent to complete the work on the new machine. And once again I repeat that this is just my guess.

Anyway, after 4 a month after the start of the modernization of the M16, a new Magpul Masada ACWS submachine gun appeared (if you translate an abbreviation, you get something like an “adaptive combat weapon system”). Or rather, not even an automaton, but a whole range of small arms consisting of 2 submachine guns chambered for 5,56x45 with 368, 257 barrel lengths and the designation Carbine and SQB; sniper rifle for the same ammunition with a barrel length of 457 millimeters and the designation SPR; automatic machine chambered for 7,62X39 with the designation AK. A manual machine gun chambered for the 7,62x51 cartridge appeared a bit later, although it can only be called a machine gun within the framework of the national classification of weapons. All this could easily be transformed from one to another with the help of interchangeable modules of which the weapon consists.

In 2008, the full result of the work of the designers of the company Magpul buys a license Bushmaster Firearms International. After a slight modernization of the weapon, which was a transfer of the loading handle, a new weapon appeared on the market under the name known to us - Bushmaster ACR.

In the civilian market there are options for weapons with barrel lengths 318, 268, 406, 457 millimeters. Moreover, the amount of ammunition for which the weapon can be adapted, namely the cartridges 5,56x45, 7,62x39, 6,8x43, 6,5x39, is significantly expanding, at the moment .300 AAS (7,62x35) has also been added to them. Given the popularity of weapons, this list may expand. It goes without saying that for the civilian market all weapons are deprived of the possibility of automatic fire.

Since the weapon very quickly proved that it could not only carry with well-known and credible samples, but also surpass them in certain characteristics, the military became interested in the machine gun. And here begins the confusion in Santa Barbara of American arms companies. The fact is that Bushmaster is part of the Freedom Group holding company, which includes Remington in all its guises. It is the company Remington and engaged in the supply of a modular system ACR in the US Army.

Thus, for the civilian market and for the army, weapons are offered by two different companies and money goes to different wallets, only one wallet in the right pocket, and the other in the left one.

It should be noted that the machine itself is well proven in Afghanistan, that is, with significant temperature drops and not the cleanest conditions.

The design of the machine Remington ACR (Bushmaster ACR)

Returning to the issue of upgrading the M16 for the 4 month, it should be noted separately that the final result can boast of an automation system different from the M16. 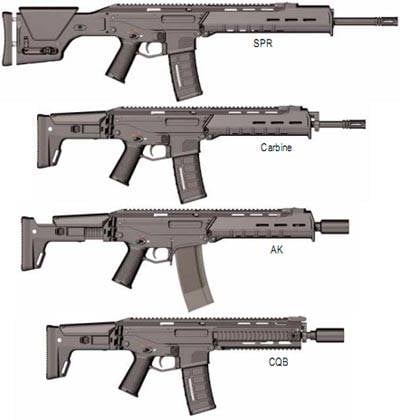 Automation weapons built around the removal of powder gases from the barrel with a short stroke of the gas piston and is virtually identical to that of the AR18. Automatic AR18, as they say, is widely known in narrow circles. Those who are addicted to firearms know the name “Widowing”, which the machine gun received due to its popularity in the IRA.

Despite the fact that the bolt and gas block of the weapon are represented by separate modules, each of them is easily disassembled for repair and maintenance. The same applies to the trigger mechanism.

There is a very interesting fact about the trigger mechanism of this weapon. This is the only element that distinguishes the civilian Bushmaster ACR from the army Remington ACR and is presented as a separate module. That is, in order to obtain military weapons, it is enough to replace only a separate module, which in the case of global hostilities can be useful if there is a shortage of weapons, which is unlikely of course, but still.

The controls are duplicated on both sides. The cocking handle can be installed both on the left and on the right side, or it can even be on both sides. But It is worth noting that during firing the handle moves, unlike all the same M16.

What is really quite useful is the presence of various options for the machine guns, the standard butt, by the way, is folded up and does not interfere with firing from a weapon, although the fire mode switch closes on one side. Given the widespread use of light armored vehicles by the US Army, it becomes unclear how a weapon with a fixed butt can be in service.

If we talk about the modularity and ease of operation of these weapons, then it should be noted that the designers coped with their initial official task - the weapon can be completely disassembled and assembled without additional devices. Even the barrel can be replaced “on the knee”, while at medium distances it will not be necessary to shoot the weapon - the deviations will be minor, even though the aiming devices are located on the receiver and forearm.

A separate "chip" of this machine is that its mechanisms can work without lubrication, but the manufacturer does not recommend to abandon the lubricant at all, it just needs a minimum. This is achieved thanks to the special coating of individual elements of weapons, which in principle is not new, and each manufacturer has its own composition and its own patented names with approximately the same performance characteristics as a result.

Often, you can find information about the incredible accuracy of this machine, comparable to the accuracy of a self-loading sniper rifle. Conversely, there is no secret in this, such a result is achieved by fitted details of the mechanisms of the weapon, and most importantly thanks to a high-quality trunk, whose channel is chrome-plated. It is even stated that the thickness of the chromium layer is three times thicker than that of the M4, which, in theory, should have a positive effect on durability. Speaking in numbers, this is the 0,5-1 corner minute by single shots. But these are the numbers that give the owners of these weapons, the manufacturer does not say anything about it.

Pros and cons of the Remington ACR (Bushmaster ACR)

The main advantage of this machine is its high resource and stable characteristics for each weapon, which is rarely found in any mass-produced product. The ability to adapt to specific needs, and most importantly to various ammunition, is also an indisputable plus. The “omnivorous nature” of weapons for ammunition from different manufacturers, ease of maintenance - all this is and should be present in any weapon, but for some reason the presence of this should be singled out separately as a virtue, and not as a matter of fact.

The main disadvantage of this machine is its cost. Of course, for each individual module, you can distinguish individual negative aspects, but the beauty of modularity is that if something is not pleasant or not comfortable, then this part simply changes to another and as a result you can assemble a weapon not only suitable for specific tasks, but also fully appropriate personal preferences arrow. 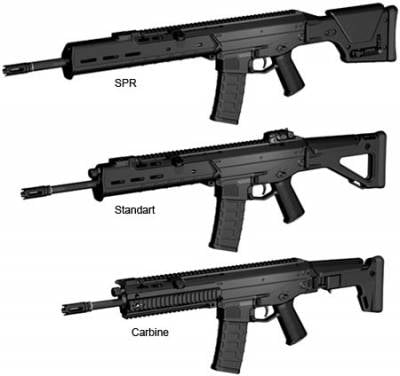 In the conclusion of the article about the Bushmaster ACR or Remington ACR machine, one cannot but touch upon the topic of pricing. It is very doubtful that in production this weapon will be twice as expensive as other common production models, and indeed it’s obviously not phenomenal, but just a little higher than in some other models. Despite this, the price tag of the machine is not at all slightly higher than that of the M4.

If we draw any conclusions on the design of the weapon, then we can say that there is nothing supernova in it, just the weapon is made qualitatively, not from scrap metal, with high accuracy and normal quality control.

It is impossible not to touch on the topic of modularity of weapons. For some reason, for most people, even the possibility of changing the trunk is absolutely unnecessary for the machine. And indeed, no one will carry with them interchangeable trunks of various lengths, much less change a long barrel to a shorter one when on the move, when you enter the room, for greater maneuverability. It is even doubtful that someone will change the same barrel immediately before the fighting, adapting the weapon for a particular situation. The main advantage of the modular system is that weapons are much cheaper in mass production. 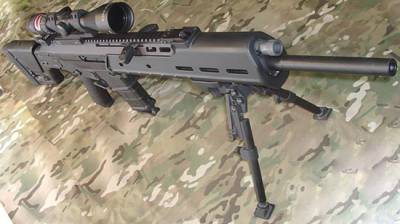 Not least, and quick repair in field conditions, when of two, sometimes different, weapons with different breakdowns, you can assemble one complete, and you do not need to be for this master-gunsmith.

Even training in the maintenance of weapons, which is not fundamentally different from each other, is an indisputable plus of a modular system.
So modularity is not a huge amount of various unnecessary additions from the fact that money has nowhere to go. Modularity in a firearm is the ability to count and save money.