And we warned. A new non-nuclear strategic deterrence system has been created in Russia 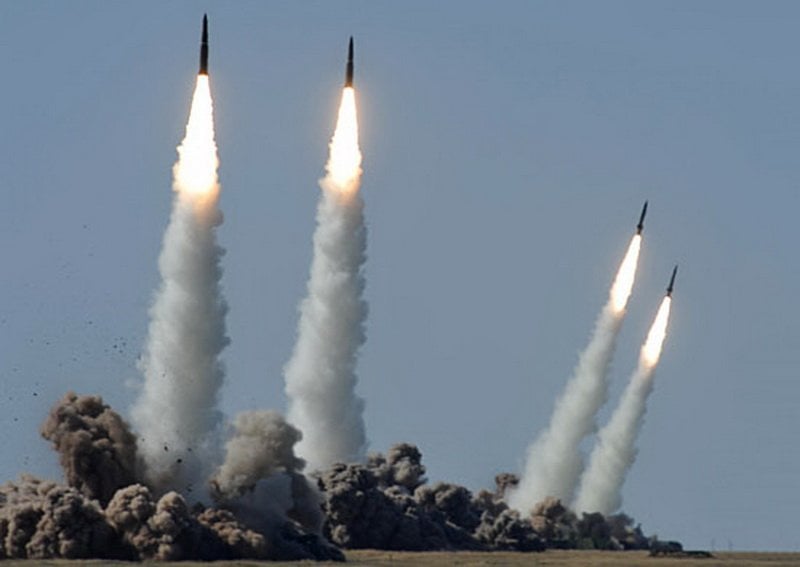 Yes, 7 in November 2017 of the Year "Lenin" in the person of the Chief of the General Staff of the Armed Forces of the Russian Federation Valery Gerasimov announced a revolution in the defense system of our country! So, exactly 100 years after the social revolution, we got a revolution in the army.

I will not intrigue. Yesterday, the head of the General Staff of the Armed Forces of the Russian Federation announced the creation of a full-fledged group of high-precision weaponsable to use missiles at a distance of 4000 kilometers. This was reported by Interfax-AVN.

"Formed controls and special units that plan the use of high-precision long-range weapons and the preparation of flight missions of all types of cruise missiles".

The fact that our missiles have repeatedly demonstrated their capabilities in applying them to targets in Syria is well known to all. The rush after the next launch of rockets from any carrier in Russia is long gone. On the contrary, the majority of Russians would be very surprised if such a launch took place in a non-standard mode. You quickly get used to good things.

In a short period of time, which was given to our defense and military personnel, Russia has managed to create what most of the states only dream of today. The head of the General Staff in his speech even called the deadline for such a task: 5 years! "Over the past five years, a breakthrough has been made in equipping the armed forces with long-range precision weapons."

What is really done in such a short time? Why is this event really akin to revolution? And what is this system that allows you to solve problems not only with the use of nuclear weapons, but also with conventional high-precision weapons. How does this happen in Syria?

In fact, we received a new format of military relations with our neighbors. If earlier, before the official statement of the representative of the Ministry of Defense of the Russian Federation, most military analysts and specialists referred to the presence of nuclear deterrence in Russia, today we can safely say about the emergence of a non-nuclear deterrence system!

What elements did this system come from? Enemy spies will ask to postpone the pen, I will not say anything new. In fact, the elements of this system have long been known to most readers of the Military Review. Who has not heard of the Iskander-M operational tactical missile system? Maybe for someone of a curiosity, Caliber, sea-based missile systems? Or maybe we did not write about the new X-101 cruise missiles that are used by our "strategists"?

As you can see, every element of this system is known. Moreover, each element was repeatedly checked. This happened during the "classical" tests, and during the military conflict in Syria. But the system only consists of elements. And the presence of these notorious elements does not mean the creation of a coherent system.

And it is here that something pops up that our specialists didn’t particularly extend to yesterday. Weapons, however good they are, require respect for oneself. And modern weapons also require the creation of many services that will actually send these weapons to the right place.

This is what Valery Gerasimov said. For specialists, one phrase is enough: "... the hardware-software complexes for planning, information support and the preparation of combat data were adopted for supply." Simply put, Russian precision weapons now have no less modern means of control. And this is a completely different level.

I foresee the skepticism of some readers who, according to the old worn-out scheme, will now begin to talk about the quantity of such weapons. Any specialist has repeatedly come across such skeptics. "Well, yes. We created it ... so what? There are no such weapons in Tmutarakansk! There are still old Soviet guns (Tanks, planes, rockets ...)! "Isn't that a familiar picture?

I agree about "Tmutarakansk". Why are there X-101 rockets? In the taiga, where there are almost ten thousand kilometers in a straight line to the likely enemy? Nobody ever saw strategic bombers at the local airfield. Yes, and do not fit such an aircraft on takeoff.

The answer sounded again in the speech of General Gerasimov. Over the past 5 years, "... serial deliveries of Iskander-M tactical missile systems, submarines and surface ships with the Caliber missile system were launched, and the modernization of Far aviation under the use of the new X-101 cruise missile. "I specifically focus readers on" serial "! These are not piece products.

And for those who are good news increase vitality, I will inform one more figure. For a complete set of "healthy lifestyle" from HE. More precisely, personally from the chief of the General Staff. "As a result, the number of land-based, sea-based and airborne carriers increased by more than 12 times, and high-precision cruise missiles - more than 30 times."

The usual kind of speech of one of the leaders of the Armed Forces of Russia. The military is not at all inclined to lyrics. Accurately, briefly and without too much pathos, he reported on the creation of an almost new “shield” for our country. It seems to be a common thing. On that stand. And in fact...

The emergence of a new shield from Russia is fundamentally changing the balance of power in Europe and Asia. We talked at various sites about containment systems. We have long warned about the possibility of an asymmetric response to the encroachment of the block. It remains only to congratulate our Western "partners" and recall the words of V. I. Lenin with which I began this article ...