November 8 2017
14
Recently, we are waiting for the holidays with some concern. For some reason, holidays are always activated inadequate. Be it revolutionaries with pans, nationalists of all stripes, radicals of a religious nature. Even some nudists or homosexuals. 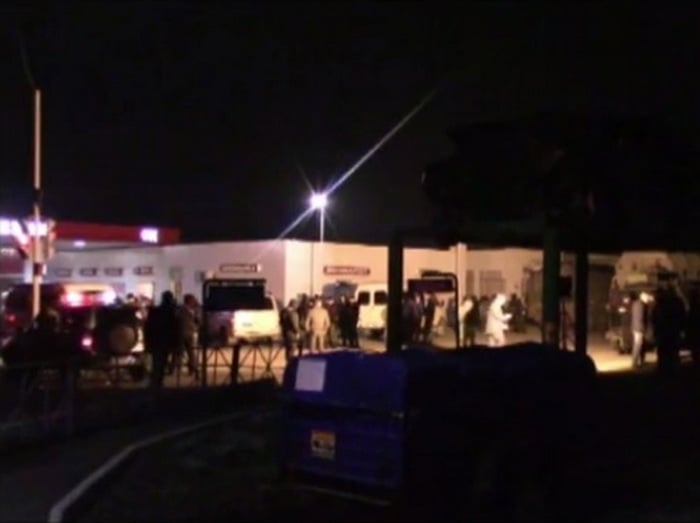 Do not give us a rest. In the huge mass of good people there is always someone who is very bad when the rest is good. The past holidays were no exception. They brought grief to several Russian families. Sons, husbands, fathers died. Died worthily. Like men. But grief from the awareness of this has not diminished. Grief is always grief.

Most Russians in the kaleidoscope of past events did not even notice the strange battle that took place on November 5 at a traffic police post in Ingushetia. We were much more "fun" to watch the "revolution", which began on November 5 and successfully ended with the detention of two or three hundred morons with knives, firecrackers and traumatic weapons on the same day.

Probably, this fight would not even become the property of the federal media, if not for "full stuffing."

Reportedly news agencies, everything was there. From an attack on a stationary post and a shootout with police officers to self-detonation of a suicide bomber and blocking militants by special forces. With the natural removal of militants from the face of the earth.

Some media outlets, especially those that are not very popular and readable, but have a regular audience, have suggested that the activation of terrorists in Ingushetia is a response to the defeat of ISIS in Syria and Iraq. Moreover, this topic is being discussed quite actively.

And there is a certain logic in this, oddly enough.

We once wrote about the possibility of the return of militants from Syria to their countries. This problem is really serious. But, it is solved by our special services quite well.

We do not have accurate information about those who participated on the side of the militants in Syria. But this does not mean that those who need it do not have such data, which is quite logical and reasonable.

What are these assumptions based on? How are Syria and the North Caucasus connected?

This question has a very logical answer. To understand the situation, it is enough to know the basics of the ideology of ISIS *.

According to these postulates, all the territories of the planet on which Muslims live, automatically fall under the authority of the caliphate. Such territories are called vilayats.

Naturally, the North Caucasus is one such vilayat. In particular, Ingushetia. We have not for nothing focused attention on the fact that the opposition is going to terrorists who try to "dissolve" among their own people and "disappear."

But in the light of the actions undertaken and carried out on an ongoing basis by the actions of the special services and the police, the version of “returnees” looks very doubtful.

But another version, which is also voiced by some media, really deserves attention. This is a version of "asleep action movies." That is, about those who wanted to go to Syria and Iraq, but by virtue of the order from above stayed at home. For sabotage and other terrorist acts on the orders of the caliphate. As for these “dormice”, today the head of the special services not only in the Caucasus has a headache. But more about that below.

It is this version, in our opinion, that explains much better the events that took place on the DPS post. There are not so many videos about the attack on the net. But they are. And we carefully studied these materials. As reported by officials of the incident. To be honest, inconsistencies are like mosquito larvae in a summer pond.

First of all, one should pay attention to the fact that quite professional police officers were at the post and, judging by the organization of the service, they were well aware of the possibility of an attack. It was simply impossible to destroy such a DPS outfit by the forces that the terrorists had at their disposal.

Further, during the most exchange of fire among the police there was no panic. It was a battle of soldiers who know what they are doing and understand that their death can be overtaken at any moment. Clear, no fuss actions, teams of commanders, professional ammunition consumption. Many things speak precisely about well-trained fighters in the DPS. And fighters who have combat experience. Without specifying where, most importantly, he had the place to be.

At first glance, the actions of a suicide bomber look even more incomprehensible. 4-5 machine guns, which in the event of a successful attack would have been terrorists, were worth the loss of a suicide bomber? Were this man's many months of preparation for death? What is the result of his self-explosion? Destroyed DPS checkpoint? Well, is not it nonsense?

Some of the readers now may recall the intimidation of the population and security forces by such acts of terrorism. Should the police get scared now? Also a funny version. especially in the light of the fight that we saw on the video. Such intimidation ...

And now some unexpected version for some. Fighting as a DPS is just an accident, which happened due to the fact that the DPS outfit actually served. Actually checked passing cars and those who were in them. And this was the cause of the clashes.

The "live mine" was carrying a "support group" to carry out some serious terrorist attack in a crowded place or at some important facility. It is in this version that the puzzle begins to take shape. Here and the beginning of a shootout in a deliberately losing place. Here and the death of the employee who was engaged in inspecting a car or checking documents of passengers. Even the suicide bombing of a suicide bomber fits into the general logic.

Squeezed by the fight and understanding that there are no options for saving the “living mine”, the militants decide to use it on the spot. Therefore, the penetration of the post itself, in the hope of the fighters who fight from there, is quite logical.

We often overlook the feat of others. So what if a policeman died in a shootout with bandits? He knew the risks. He knew that working for the police was dangerous. And the fact that this DPS officer may have saved many lives of ordinary Russians, we prefer not to know. We will not be so scared.

But be that as it may, the danger of these "awakened" terrorists, who often do not even realize that they are terrorists, exists. In particular - in the North Caucasus, more precisely, in its individual parts. And Ingushetia is, in our opinion, for a reason.

In the Chechen Republic today it is impossible to imagine hothouse conditions for terrorists. Despite everything: relief, “offended” from past times and so on. Kadyrov is holding the region tough, there is nothing to say.

In Chechnya, or in Dagestan today, it is difficult to imagine a more or less long existence of gangster formations. The leadership of the republics and power structures are not just well able to find and find gangsters. This is a systematic elimination, which is successfully happening.

Ingushetia, the smallest in size and population of the republic of the federation. 3628 square kilometers and less than half a million inhabitants. Density 132 person per square. km Higher than in Dagestan, higher than in the Chechen Republic (90 people / sq. Km).

But do not forget that in the south the border of Ingushetia coincides with the state border of Russia. And on the other side is Georgia. With all the ensuing perspectives.

The same can be said about the Karachay-Cherkess Republic. The same region, the same border with Georgia. 14 thousand square meters. km the territory where 466 lives thousands of people. The population density of 32 people / sq. km

It makes sense to look at these republics in the light of what is happening in Syria.

We have already talked about the so-called peripheral vilayat. It is difficult to say how justified the opinion, but there is information that the role of the peripheral wilayas in the system built by the Islamists has always been high.

It is known that the vilayats, they are the Russian republics of the North Caucasus, Tatarstan and Bashkiria, served as a source of replenishment of ISIL * human reserves in the Middle East. It is possible that, apart from recruiting, they were assigned another function. What - a red herring or redirected strikes, now is difficult to say.

But the methods of actions of terrorists in Ingushetia showed that they are not self-taught from among the youth, treated by the relevant "shepherds", but quite trained fighters. And the practice is purely "Syrian" - a suicide bomber plus an assault group. In Syria, it was precisely such groups that were used very successfully and universally.

It is obvious that not all participants of terrorist and bandit formations of the notorious "Caucasus Emirate" honored with their participation the Syrian sands. And they made up some kind of "reserve for a rainy day."

"Black Day" if not, then it is about to. On the way. The central vilayats in Syria go under the control of Syria under the blows of the Russian Aksad and the Assad army.

Not everything is smooth in Iraq either. The Kurds, supported by the Western allies, are also gradually taking their toll.

The leadership of the LIH * reluctantly, in order not to stop the flow of money and people, it is necessary to show their strength. Any way.

So the activation on the periphery, after the "success" of ISIS * in Aleppo, Mosul, Raqqa, Deir-ez-Zor is quite natural and understandable.

Blood is the same mover for a terrorist organization as money or ammunition. And, in order to have the second and third components, it is necessary to shed the first. And, preferably, as efficiently as possible and intimidating.

It is not surprising that the movements began in the North Caucasus. Here, the half-dead from among the “warriors of light” of past times remained, and (whatever you say) the practice of guerrilla warfare was well established and worked out at one time.

The first signal or not, but it is obvious that the North Caucasus needs to pay increased attention to our special services.

* ISIS is a terrorist organization banned in the Russian Federation.

Ctrl Enter
Noticed oshЫbku Highlight text and press. Ctrl + Enter
We are
Terrorist activity in Ingushetia does not decreaseResults of the week. "It's just the flu all together are sick, and one by one go crazy!"
Military Reviewin Yandex News
Military Reviewin Google News
14 comments
Information
Dear reader, to leave comments on the publication, you must to register.