November 8 2017
7
In addition to the construction of submarines for new projects, the Soviet shipbuilding industry gradually mastered the creation of surface combatants. The firstborn of the Soviet-era surface shipbuilding was a series of Uragan-type patrol ships, the project of which was developed in Leningrad. These were small ships with a displacement of 500 – 600 tons, armed with two 102-mm and four 45-mm guns (they were later replaced by more modern 37-mm guns and DShK). The Hurricanes had a 12,7-mm three-tube torpedo tube and depth bomb bombers.

In total, in 1927–1935. According to this project, 18 watchmen were built in three series that were slightly different from each other. The Andre Marty plant also took part in their construction. In October 1927, the SKR “Storm” and “Flurry” of the 1st series, which became part of the Black Sea in 1932, were laid at the enterprise fleet. They served the whole war. In May 1944, the Storm received a torpedo from the German U-9 submarine, its stern was torn off, and was subsequently repaired. In the late 40s - early 50s. both TFRs were disposed of.

In addition, for the needs of the Far East, the plant in the 1932 year laid two watchdog II series - "Thunder" and "Burun." Each section was sent to Vladivostok at the shipbuilding “Dalzavod”, where they were re-mortgaged and completed.

The manual appreciated the efforts of the Nikolaev shipbuilders: February 25 1932. The plant named Andre Marty was awarded the Order of the Red Banner of Labor under the number 208.

Following the small displacement of the guard, it is expected that the turn of the larger ships has come. They were the leaders of the destroyers of the project 1 type "Leningrad". The leader of the destroyers - a subclass of ships, formed during the First World War. With different variations, depending on the naval school of a given country, the leader is an enlarged squadron destroyer. 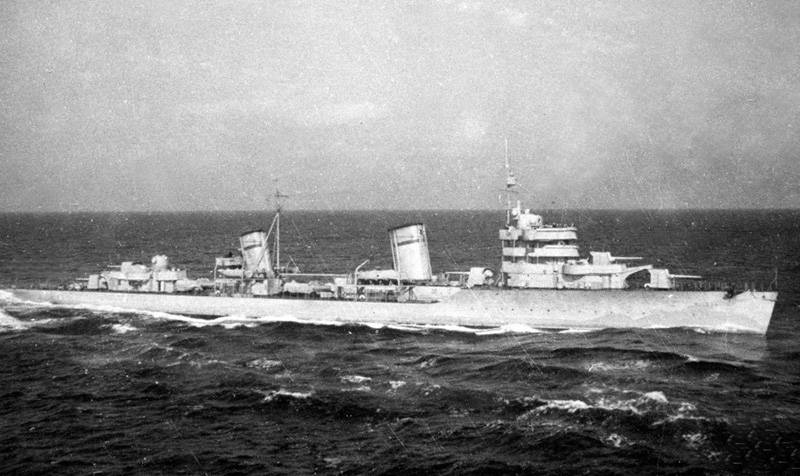 Leaders had to play the role of flagships in the flotilla of conventional destroyers, to have not only a larger displacement, but also reinforced weapons. If necessary, they could be used as hunters for "standard" destroyers. The Soviet Union was not an exception in this field. Moreover, the fleet of a potential enemy on the Black Sea - the Kingdom of Romania - at the beginning of the 1930s. was to be replenished with two large destroyers, against which the Noviki, inherited from the Russian Empire, were, in the opinion of Soviet sailors, somewhat weak.

The draft of the new leaders of the destroyers was considered at a meeting of the Revolutionary Military Council in August 1930 and approved in June 1932. Originally it was planned to build 6 series ships - two for the Baltic, the Black Sea and the Northern fleets. Construction of the head leader "Leningrad" began at the Shipyard named after Zhdanov.

Two Black Sea leaders, named “Moscow” and “Kharkov”, were laid out in October 1932, at the Andrew Marty plant. These were quite large ships with a standard displacement of more than 2 thousand tons. Three turbo gear units with a total power of 66 ths. Hp allowed to develop speed in the 43 node on running trials. The armament looked powerful enough for that time: five 130-mm guns, two 76-mm guns, four 37-mm anti-aircraft guns and four 12,7-mm machine guns. The leaders had torpedo armament (two four-pipe 533-mm vehicles), and could also take on board mine barriers.

“Kharkov” was launched in September 1934, “Moscow” in October. In 1938, both ships became part of the Black Sea Fleet. The fighting career of leaders in the years of the Great Patriotic War took shape in different ways. The leader "Moscow" was killed 26 June 1941 g. During the raid of the strike group of Soviet ships to Constanza. According to one of the versions, it was blown up on a mine of the Romanian barrier, on the other - it was mistakenly torpedoed by a Soviet submarine U-206, which was mistaken for being a Romanian destroyer. The leader "Moscow" was discovered in 2011 at a depth of 45 m - its body was broken in half as a result of a powerful explosion.

The fate of Kharkov is also tragic. During a raid operation on the Crimean coast, together with destroyers "Ruthless" and "Capable" on October 6, 1943, "Kharkov" was subjected to repeated raids by the German aviation. After receiving a few bombs, he sank. Both destroyers were sunk.

As a result of the operation of the leaders of the destroyers of the 1 project, a number of shortcomings were identified: a weak hull, a strong vibration, and insufficient seaworthiness. In part, these imperfections were corrected in the leaders of the next - 38 project. In January, 1935 was founded at the André Martí plant by “Baku” and “Tiflis” (later “Tbilisi”). After a year and a half of construction, hull elements were transported to Komsomolsk-on-Amur, where they continued to be completed with the subsequent entry into service of the Pacific Fleet. 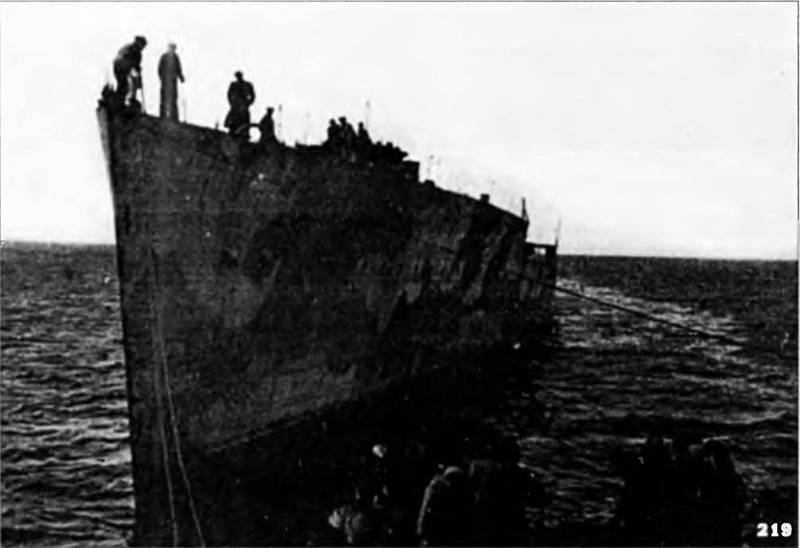 Towing the “Yerevan” leader from Nikolaev to Sevastopol, August 1941

Finishing the story about the leaders of the destroyers built at the plant of Andre Marti, it is worth mentioning the ships of the 48 project, created not without the influence of the famous leader “Tashkent” built in Italy for the Soviet Union. At the end of 30's as part of the implementation of the Big Fleet program in Nikolaev, the leaders of the destroyers "Kiev" and "Yerevan" were laid at the plant named after Andre Marty. By the beginning of World War II, they remained unfinished - “Yerevan” was urgently launched on the eighth day of the war. Subsequently, they were towed from the left Nikolaev and 1941 – 1945. stood in Batumi. After the war, for a number of reasons, they were abandoned.

The First World War showed the great effectiveness of underwater mine-barriers, especially since the naval forces of Soviet Russia after the end of the Civil War actually did not have such ships. The fleet development program, adopted in 1926, envisaged the construction of six submarines - minelayers of three each in the Baltic and Black Sea fleets. According to the project, the submarine with a displacement of 1000 / 1300 tons, in addition to the six bow 533-mm torpedo tubes, should have two stern mine tubes in which the anchor mines 20 were placed. 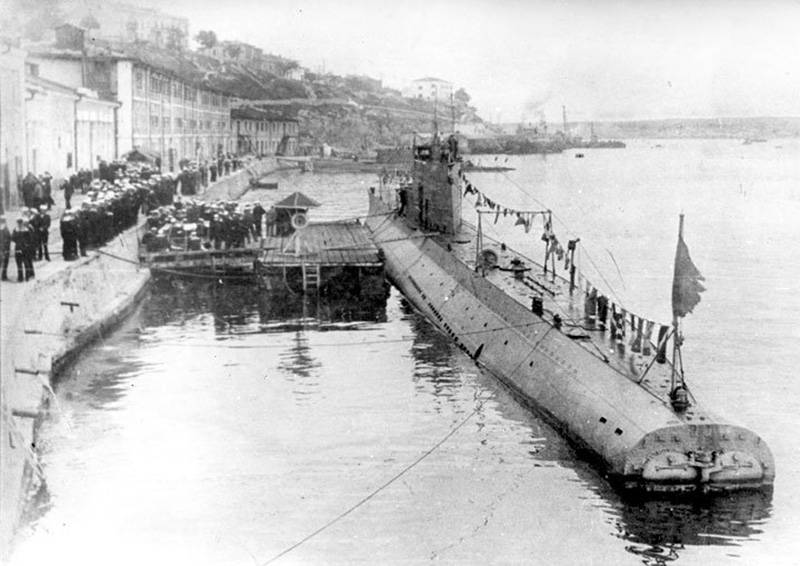 In the spring of 1930, the Garibaldiets L-4, Chartist, L-5 Carbonaria L-6, which were commissioned to the fleet in October 1933, were laid at the André Martí plant. The need to strengthen the naval forces in the Pacific and the insufficient shipbuilding capacities of this region prompted the Soviet leadership to build submarines in Nikolaev, and then section by section along the railway line to ship them to the Far East. In 1934, the André Martí plant began construction of underwater minelayers of the series II bis L-10 Menzhynets, L-11 Sverdlovets, L-12 Molotovts for these purposes. We finished building these ships in the Far East. 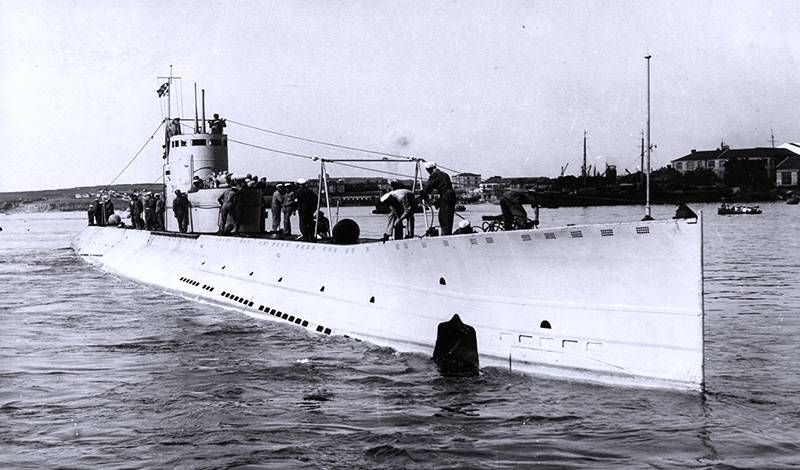 Following them in 1935, the L-15, L-16 and L-17 were laid on a more advanced project, which provided for a mixed riveted-welded hull design and was distinguished by greater adaptability. All of these boats also entered service in the Pacific Fleet. In 1938, the construction of the last series of underwater minelayers of the “L” (“Leninets”) type was started, which was the most advanced from a technical point of view. L-23 and L-24 joined the Black Sea Fleet during the war, the L-25 remained unfinished and died in December 1944, while towing. Of the Black Sea "Leninists" during the war, L-6, L-23 and L-24 were killed.

The need to strengthen its naval presence in the Far East required transportation to the Pacific Ocean and assembling on-site ships of various classes. As for submarines, due to the size and complexity of transportation, instead of the submarines of the “L” and “U” projects, it was necessary to create a small-displacement submarine that could be transferred to the Far East without disassembling into compartments. So, in 1930, it began, and in 1932, the design of the submarine of the sixth series of the type “M”, nicknamed “Baby”, was completed. These were small ships with a surface displacement from 158 to 210 tons (depending on the series) and an underwater displacement of 200 – 258 tons. The boats were armed with a 45-mm cannon and two 533-mm torpedo tubes. 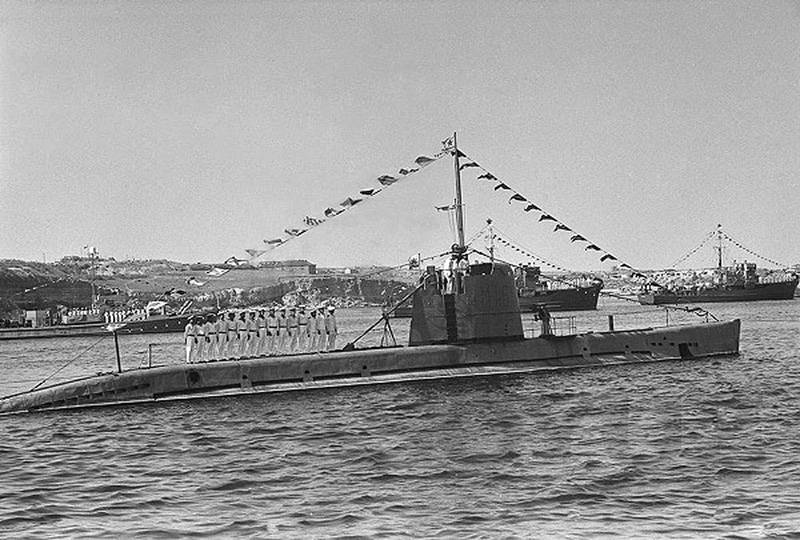 The construction of the “Baby” of the VI series unfolded in Nikolaev at the plants named after Andre Marty (20 units) and the name 61 of the Commune (10 units). The first six ships were built traditionally with the help of riveting, but then it was decided to move to a more advanced method of assembly - electric welding. Of all the “Tiny” VI series, built in 1932 – 1934. all but two (M-51 and M-52) were shipped by rail to the Far East.

The submarines of the series VI bis were a further improvement of the “Baby”. They had a higher surface and underwater speed, they could dive faster. Of those built in 1933 – 1934. in the Black Sea, six boats were sent to the Pacific Fleet, and two were left for the Black Sea Fleet.

Since the projects VI and VI bis did not completely satisfy the military, "Babies" decided to thoroughly rework and improve. So in 1934, project XII appeared. Submarines had a slightly increased displacement and size, the hull was made all-welded. It was the most massive pre-war series "Baby". In total, starting from the 1937 year, it was built on all 45 fleets of submarines (of which six were built at the Andre Marti plant).

Author:
Denis Brig
Articles from this series:
CSY: recovery after the Civil War
CSY: the first years of Soviet power
CSY: development and decline at the beginning of the 20th century

Ctrl Enter
Noticed oshЫbku Highlight text and press. Ctrl + Enter
We are
Coastal Warships: Modern Approach"Svetlana". History of creation
7 comments
Information
Dear reader, to leave comments on the publication, you must to register.