November 8 2017
2
Saudi Arabia threatened Iran with serious consequences for the “act of war”. The reason was the rocket - a modification of the Soviet "Scud", released from Yemen and shot down near the Saudi capital Riyadh. Tehran denies having to do with the attack. But the Saudis reserve the right to "respond to Iran at the appropriate time in an appropriate manner." Should we expect a direct conflict? 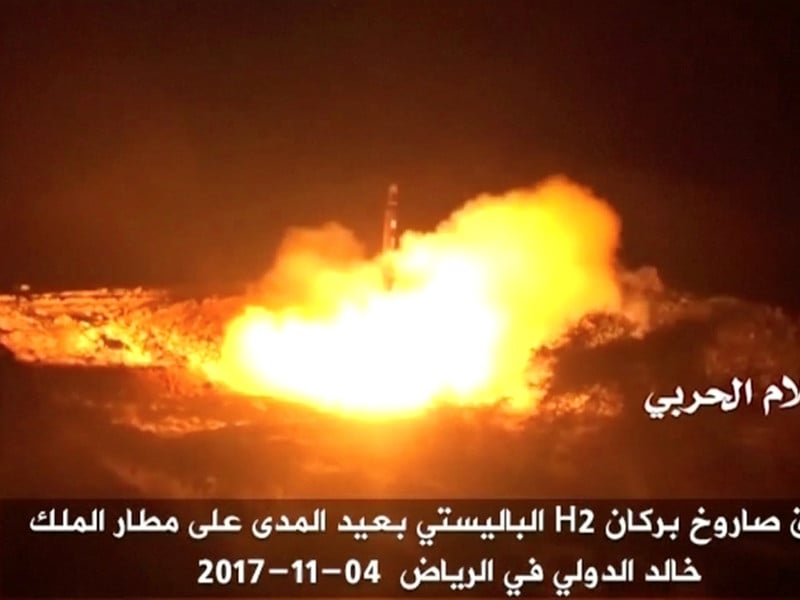 "Our friendly advice is to immediately stop the attacks on the innocent and defenseless people of Yemen, throwing off a barrage of useless accusations." Thus, the official representative of the Iranian Foreign Ministry, Bahram Ghasemi, responded to the accusations of the “act of aggression” by the Saudis of the Iranians.

Iran denies that it has anything to do with the rocket attack on Saudi territory from positions in Yemen. It became known yesterday that a ballistic missile was fired in the direction of the capital of Saudi Arabia, Riyadh. The Saudi Defense Ministry said that the Kingdom’s air defense hit a Burkan-1 rocket near King Khalid’s airport, 35 km north of the capital. Yemeni Shiite Hussite rebels, who claimed responsibility for the launch, say the missile hit the target.

What the Saudis blamed Iran

Representatives of the Arab coalition led by Saudi Arabia in Yemen accused Iran not only of providing ballistic missiles to Yemeni Hussites.

Coalition spokesman, Saudi colonel Turki al-Maliki said: Iran has provided Shiite rebels with “all kinds of weapons, From UAVs to lethal weapons. The Burkan-1 ballistic missiles are also “made in Iran,” according to the Saudi military. According to the coalition, Iranian experts transferred the technology of launching rockets to the Housits. Moreover, Iranian military experts directly participated in the launch of these missiles on targets in Saudi Arabia, state authorities say.

The Saudis reserve the right to respond to this attack "at the appropriate time and in the necessary way." “We have already heard that, on the basis of the 51 article of the UN Charter, Saudi Arabia has the right to a military response to Iran,” said Boris Dolgov, senior researcher at the Center for Arab and Islamic Studies at the Institute of Oriental Studies of the Russian Academy of Sciences. Article 51 of the UN Charter guarantees the right of member states to individual or collective defense in the event of an attack.

In the meantime, the command of the Arab coalition announced the closure of all airports and ports of Yemen.

The current armed conflict in Yemen has been going on since 2014. On the one hand, the troops of the ousted Sunni President Abd-Rabbu Mansour Hadi, supported by Saudi Arabia, and the Saudi Gulf Cooperation Council led by the Saudis are participating in the war. On the other hand, the Shiite Hussite Movement (or Ansar Allah), which enjoys the political support of the leading Shiite country, Iran, is operating. "Tehran denies military support for the Hussite movement, but openly supports the Houthis diplomatically and politically, supplying humanitarian supplies," Dolgov points out. The third party to the conflict is the Yemeni "branch" of the "Islamic State *" and the Ansar al-Sharia coalition associated with Al-Qaida.

“The recent events, especially the shelling of Saudi Arabia from the territory of Yemen, have obviously aggravated both the situation in the region as a whole and the relations between Saudi Arabia and Iran,” stated Boris Dolgov. But, the expert points out, the beginning of this confrontation should be counted from the 2014 year, when the Saudis directly intervened in the internal conflict in Yemen.

The air strikes that the Saud-led coalition methodically inflicted “led literally to a humanitarian catastrophe in Yemen,” believes Dolgov. “More than 20 thousands of civilians died. The infrastructure is destroyed (including water supply and water treatment plants), which led to an epidemic of cholera, which also claimed thousands of lives, ”the source indicates.

In Saudi Arabia, they have already beaten with modified "Scuds"

The participation of Saudi Arabia in the Yemeni campaign provoked a response from the Hussite rebels. The expert recalls: “The shelling of Saudi territory began. The current rocket attack is not the first such incident. Earlier, two oil refineries were destroyed in Saudi Arabia. ”

We are talking about the attack that took place at the end of July this year. Hussite troops launched a missile attack on the oil refinery near the town of Yanbu, located in 1 thousand km from the Saudi-Yemeni border.

Arab media reported that the Hussites launched the Burkan-2 ballistic missile. This weaponry is actually part of the Soviet military legacy. Burkan is a modification of the Soviet tactical missile system (OTRK) 9K72 Elbrus. OTRK consists of single-stage P-17 ballistic missiles, in the NATO Scud B classification. In 1970, the Elbrus were actively exported, including to the Democratic People’s Republic of Yemen (Southern Yemen), orienting to the USSR. Iran bought these complexes through Libya.

The Burkan-1 rocket, which the Hussites demonstrated in 2016, recalls the Iranian Shehab-2, which is also the North Korean Hwason-6.

For the first time, Burkan was used in April last year to strike the Saudi King Fahd airbase. The second blow to the refinery this summer confirmed that Saudi Arabia’s air defenses could not neutralize missiles built on obsolete Soviet designs.

Hushits are active against Saudi Arabia and "on the ground." “There were incidents when Hussite troops penetrated into the territory of Saudi Arabia, fired at border posts, attacked convoys,” indicates Dolgov.

But is it possible not a mediated, but a direct collision between Iran and Saudi Arabia? What are the strengths of rival regional powers and what could be the “battleground”?

From the point of view of manpower, Iran is significantly gaining, as pointed out in a conversation with the newspaper VIEW Director of the Center for the Study of the Middle East and Central Asia, reserve colonel Semen Bagdasarov.

The number of Iranian armed forces, including the Islamic Revolution Guards Corps (IRGC) - from 600 to 900 thousands of people, plus a significant mobilization resource, in particular the Basij militia. "The militia, organizationally subordinate to the IRGC, can put several million people," - adds the source.

The number of royal armed forces of Saudi Arabia, along with the National Guard and paramilitary forces - about 220 thousand people.

It should be noted that the kingdom ranks fourth in the world in terms of military spending (Russia is in third place after the United States and China). According to SIPRI on the 2017 year, the Saudis are spending 63,7 billion dollars in defense, or 10% of gross domestic product. In the same ranking, Iran is in 19-th place with 12,3 billion of declared military spending, or 3% of GDP.

“Iran has a lot of tanks, aviation, including its own production - which the Saudis do not have, ”Bagdasarov points out. According to open sources, the Iranian army is armed with more than 1,6 thousand tanks, including 150 Iranian-made Zulfikar tanks (created on the basis of T-72 components and American M48 and M60), as well as about 480 T-72 tanks . The number of combat aircraft is estimated at 300 units, including the Soviet MiG-29, Su-24 and Su-25. Speaking of air defense, let us recall the successful tests of the S-300 anti-aircraft missile systems delivered by Russia. “We also mention missile forces. So, Shahab-3 missiles have a flight range of up to two thousand kilometers, ”Bagdasarov added.

According to experts, the Saudi army has about 450 American tanks M1A2 Abrams (plus about the same BMN M2 Bradley, as well as about 2000 BTR and armored vehicles). The kingdom's air force has more than 260 combat aircraft (152 F-15, 81 Tornado and 32 Eurofighters are known). About 60 of Dongfeng-2 ballistic missiles with a range of up to 2,5 thousand km are bought from China.

The battlefield is Syria?

Military experts and Orientalists doubt that Saudi Arabia and Iran will reach the stage at which they will begin an exchange of missile strikes through the Persian Gulf and the main oil transportation channel - the Strait of Hormuz, active operations of the fleets, the landing of assault forces, etc. the arena of hostilities is obviously unprofitable for both countries - both the Saudis (second place in terms of reserves of black gold) and Iran (fourth place).

“I don’t think that Saudi Arabia will nevertheless go to an open military conflict with Iran, since Iran has a considerable military potential,” Dolgov points out. “The conflict is not in the interests of Saudi Arabia, since it may develop and not in favor of Riyadh (although the United States is behind the kingdom, there are American military advisers in the country).” “We should not assume that Saudi Arabia will directly attack Iran,” agrees Bagdasarov. In this case, the expert indicates:

"We can assume that a direct military clash is possible on the territory of Syria, more precisely, in the southern regions of this country adjacent to the borders with Jordan and Iraq."

The source pointed out that both Syrian government forces, the Lebanese Shiite group Hezbollah (cooperating with Damascus, but traditionally oriented on Tehran), and the pro-Iranian Shiite formations created in Syria itself are now seeking control over this region. On the other side of the front, part of the Syrian opposition is closely linked to Saudi Arabia — these groups are represented by an “E-riad group” or “High Negotiating Committee”.

Another vulnerable area, according to Bagdasarov, is the Raqqi area. "Recently, Ali Iran’s senior foreign affairs adviser Ali Akbar Velayati, in Lebanon, said they would“ liberate Raqqa ”- which the Syrian Democratic Forces recently took,” the expert recalled. - And Saudi Arabia has already expressed support for the restoration of Raqqah, has allocated funds for this, humanitarian aid from the VTS and the Kurdish “Federation of Northern Syria”. Here is a direct indication of a possible collision. ”

Boris Dolgov believes that we can expect a further escalation of the situation around Yemen - the closure by the Saudis of Yemeni ports, perhaps some sabotage actions - while continuing political demarches like a recent statement.