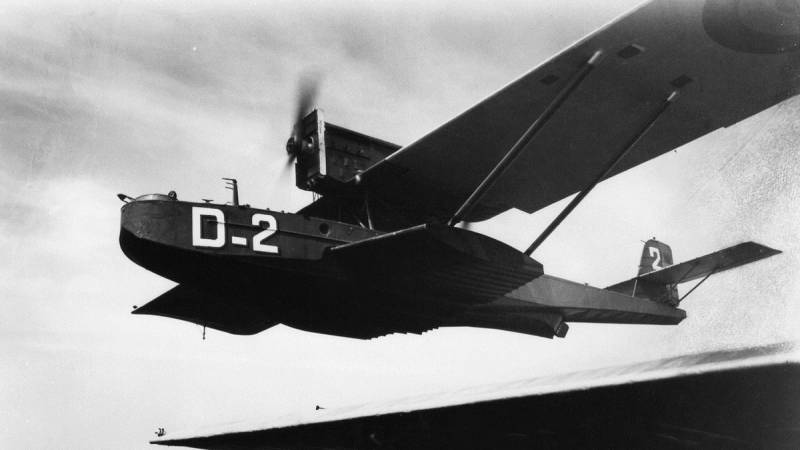 Exactly 95 years ago, 6 November 1922, for the first time, a seaplane Dornier Do-J took to the air, aka “Val”, that is, “Whale”. Since the Versailles Treaty forbade Germany to build large aircraft that could be used as bombers, German aircraft designer and entrepreneur Claudio Dornier moved production to Italy. It was there that the first "Kit" was built and tested, and then its serial production began.

Do-J turned out to be very successful, perhaps it was the best heavy 1920's flying boat in the world. It was distinguished by good stability, ease of operation, high durability, reliability and durability. Due to the all-metal construction, some "whales" flew for more than 20 years, "winding" many millions of kilometers, which would have been unthinkable if Dornier, following the example of most of his contemporaries, designed a simpler and cheaper wooden machine.

Before 1933, the Do-J was produced in Italy, and then, due to the refusal of Hitler's power to come to power from the Versailles restrictions, production was moved to Germany, simultaneously changing the index to Do-16. But the name remains the same. Total order was built 250 "whales". It would seem that not so much (the plane was considered quite expensive), but the popularity and popularity of these machines significantly exceeded their circulation. Military and civilian Do-J variants have been used in many countries. In addition to Italy and Germany, they wore emblems of the USSR, Spain, Portugal, Japan, Chile, Argentina, Brazil, Colombia, Norway, Finland, Sweden, Yugoslavia, the Netherlands and Uruguay.

In this case, the aircraft were made under the requirements of specific customers, and therefore the “Whale” had more than a dozen modifications, sometimes very different from each other. The engines, equipment, armaments, gas tank volumes, etc., changed. Some cars were equipped with passenger compartments or cargo holds (on the then heavy seaplanes, cargo compartments were called “ship-by-ship”), for which we had to seriously rearrange the nose of the fuselage.

The flat and durable bottom of the boat, made of thick aluminum sheets, gave the "whales" the opportunity to act not only from the water, but also from snow and ice, which led to their widespread use in the Arctic. Up until the beginning of World War II, the Soviet Do-J carried cargo over the tundra and carried out ice reconnaissance in the Arctic Ocean, ensuring the functioning of the Northern Sea Route. The plane, born in hot Italy, turned out to be a real polar explorer. In addition to 26 such hydroplanes, purchased in 1926-29 from the Dornier company, in the USSR six more were built - with the Soviet M-17 engines.

In addition to Italy, Germany and the Soviet Union, "Wali" were produced under license in Holland, Spain and Japan, however, the Japanese made only two aircraft in the civilian version. The Spanish Do-Js who survived the civil war served the longest, the last of which were written off in the 1950 year. On the screen saver - one of these machines in flight, taken from the cabin of another plane.

Side section of the military version of the Do-J fuselage with the English Roll-Royce Eagle engines. 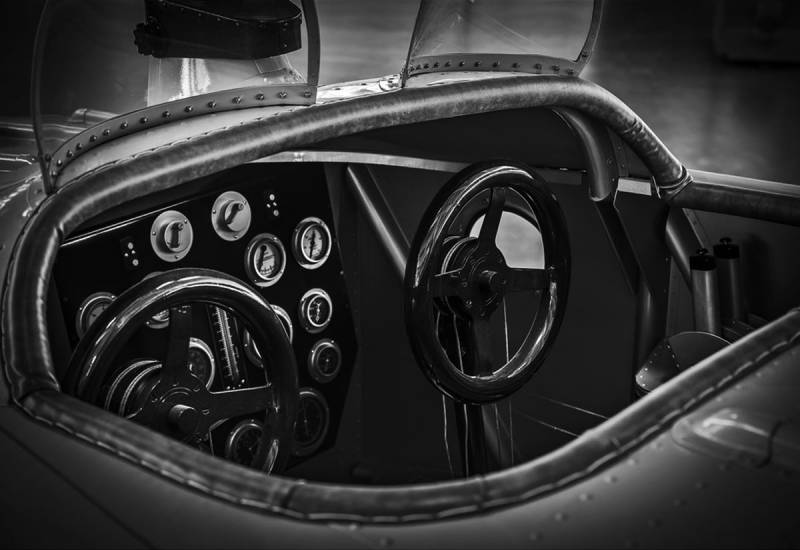 Pilot cabin Do-J looked pretty laconic, in the style of its time. The control was dual, so that the pilots could alternately rest, since the duration of the flights was sometimes many hours.

Argentine Do-J on a detachable chassis for towing on the ground. Interestingly, the main wheels are made floating, so that after the plane rolls into the water, they do not have to be taken from the bottom. 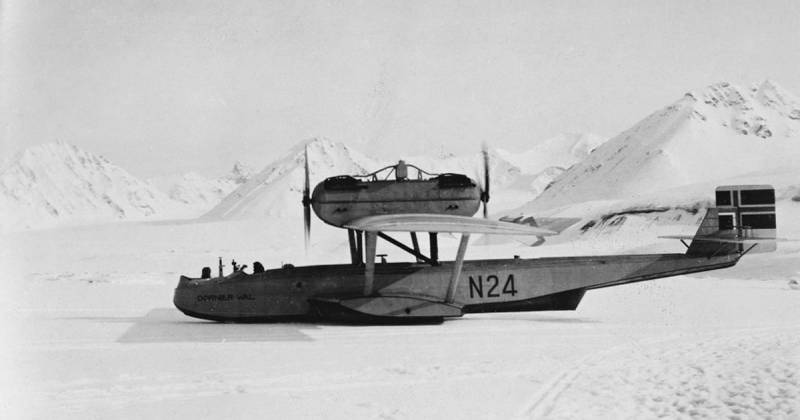 Norwegian Do-J taxis in the snow.

Brazilian Do-J Atlantis, equipped with a passenger compartment, with the pilot cabin shifted back. 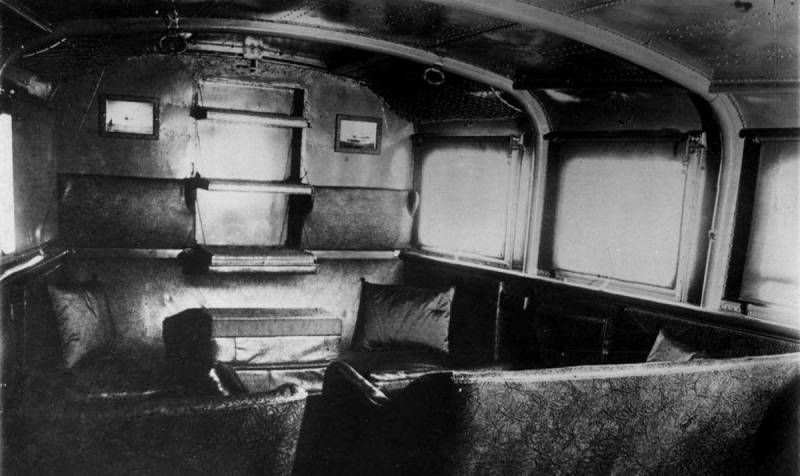 Interior Do-J. A vertical ladder is visible on the back wall to exit to the "deck", that is, on the roof of the fuselage. For obvious reasons, there were no ordinary doors in the sides. 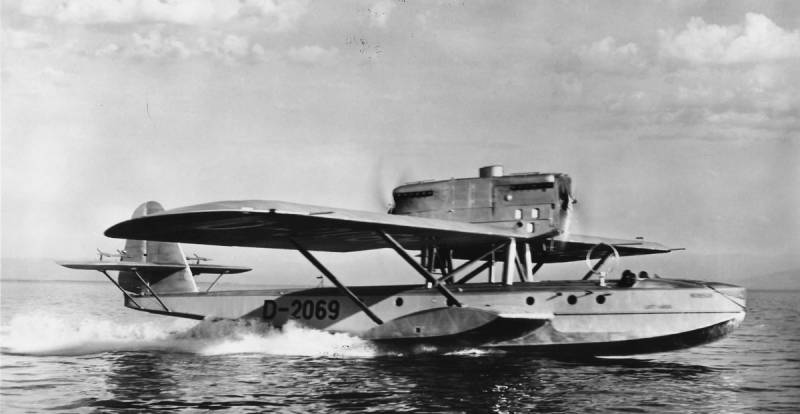 Do-J with a radio compass and modified tail tails scatter before take-off.

Another passenger version of the Do-J.

Late modification of the flying boat (sometimes called it “Superval”) with two passenger compartments and a closed cockpit. 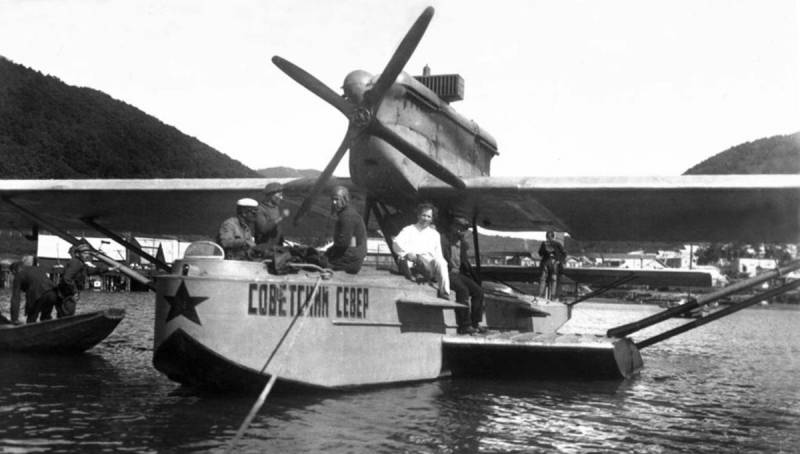 Dornier "Soviet North" on the coast of the White Sea. 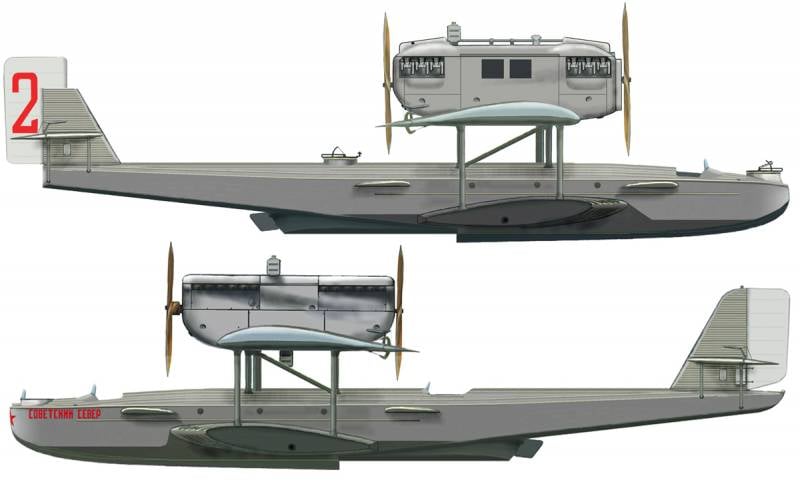 Above is the Soviet military version of the Do-J, with machine gun turrets and Lorraine-Dietrich motors. Such aircraft were used until 1937 on the Black Sea and Baltic fleets as long-range scouts.

Below is a civilian (converted from the military) Do-J of Soviet production with M-17 engines, which was used by the Main Directorate of the Northern Sea Route for ice reconnaissance.