To eat is served, gentlemen!

November 8 2017
95
In Moscow, the food was over, and citizens turned to nutria meat: an anti-crisis dish has been served in restaurants since last November. Beautiful women from Russia are doing interesting actions that discredit NATO troops. Russian soldiers come into unsuccessful contacts with aliens, which is why they turn into stones. Read the Western press!


In the 2017, the Western press is multiplying sensational reports about the vigorous activity of some “Russians,” including military personnel, as well as “CIA investigations,” whose agents managed to figure out the mysterious events and solve all the mysteries of the atmosphere. Such fakes and absurd publications is becoming more and more. It is clear that the new wave of the Cold War leads to the most perverse propaganda. It is hard to imagine that the European or American man in the Russian clashes with the newcomers believes in clashes. Or does he believe?

Popular British newspaper "Express" in February, 2017 of the year told the general public about the “attack” of Russian soldiers: Russian army soldiers attacked UFOs and even managed to shoot down a flying saucer (in the screenshots you can see footage from the video: those very soldiers and those aliens). 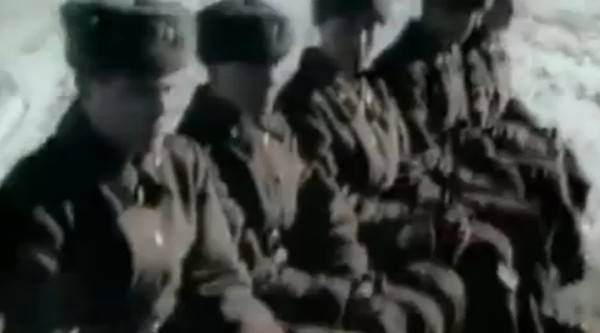 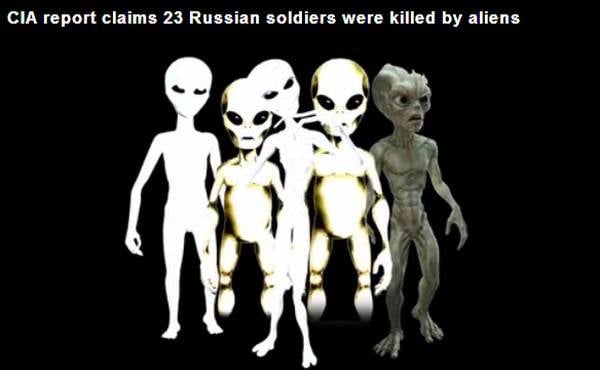 As the correspondent John Austin told, the Russian military shot down a UFO, before the “surviving aliens” went to the counterattack and killed the soldiers.

This sensational information came to the editor directly from the "declassified report of the CIA." In total, according to the CIA, aliens were killed "23 Russian soldier." The aliens chose petrification as a way to destroy enemy enemy manpower: all 23 soldiers “were turned into stones by aliens”. First, the aliens themselves "turned into a light ball."

The CIA document, according to the publication, "was buried among thousands of declassified files." And only later hit the Internet with the permission of the intelligence agency.

The report was created by 27 March 1993. In fact, its original is a “translation of the CIA” by the Ukrainian newspaper “Ternopol Evening”.

This newspaper informed readers that after Mikhail Gorbachev lost power in 1991, many KGB materials "found their way to the CIA." The “250-page dossier” about the Russian soldiers attacking an unidentified flying object also got here. The dossier was accompanied by "photographs and eyewitness accounts."

The paper states that a “flying saucer” appeared over the military unit participating in the maneuvers in Siberia. One soldier opened fire on her and shot her down. It is reported that “five undersized humanoids with large heads and large black eyes” emerged from the downed plate.

Survived two soldiers. They also described that the five creatures “merged into a brilliant white spherical glowing ball, which boomed and hissed”. Then the ball exploded, and, as stated by eyewitnesses, the 23 soldier, who cordoned off the object, "was turned into stones."

Two survived only because they did not fall into the circle of light.

The CIA report says that, according to "KGB data," the remains of "petrified soldiers" were transported "to a secret research institution near Moscow."

Experts believe that the energy source, unknown to earthlings, "instantly changed the structure of living organisms of soldiers, turning them into a substance whose molecular structure is no different from limestone."

A CIA spokesman said this was “a very dangerous case,” because “aliens possess such weapons and technologies that go beyond all of our ideas. ”

The document does not explain why the CIA took an article in a Ukrainian newspaper as a basis. It is also curious that the Canadian weekly digest is called as a source of information.News of the world. " This "source" was famous in those years for "fictional" publications.

The UFO site and the YouTube Lionsground channel unanimously warn: "You should be wary of CIA publications on the Internet, as this may be misinformation."

However, not only the CIA trades in such things.

Deborah Haines in the influential newspaper «The Times» brought the February statement by Estonian foreign intelligence boss Mikk Marran (Mikk Marran). According to him, the Russians can arrange provocations for NATO troops, who will be stationed in the territory of Eastern Europe in accordance with the new agreement on the rotation of forces.

However, both Great Britain and Estonia taught their soldiers "for months" to resist the perfidy of the Russians.

Marran pointed out that the purpose of the "provocation" is to discredit the plans of the North Atlantic Alliance to strengthen its eastern border. According to The Times, the methods used by Russians for military NATO members are searching for compromising materials in social networks and arranging “honey traps”. The latter means sending by the Kremlin secret services abroad beautiful women, whose future path splits: the beauty can either “enlist” or arrange special “provocations” in the interests of the “Russian special services”.

The article explains that the NATO military, of course, will not sit still: they will have to travel from their military units "to the cities." There they can go to the pub. And in these conditions there is a high probability of “provocation fights” and “traditional honey traps”.

Therefore, the British and Estonian military in advance looked over all the versions of Russian tactics and, accordingly, prepared eight hundred British soldiers for deployment in Estonia. According to the authorities, "spy games in the style of the Cold War" should be avoided.

Since then, we note, the “Russian beauties”, entangled by the Kremlin networks of gullible NATO members, have not been reported. It must be that all eight hundred warriors of the alliance were successfully recruited and took the oath on the Internet to Putin himself.

But there were other messages. For example, the press of the Netherlands told how starving Russian people turned to nutria meat. Burgers with nutria successfully served in the capital of Russia "chefs". About this in November 2016 year wrote edition "De Volkskrant" (attaching an appropriate photo of the rodent). 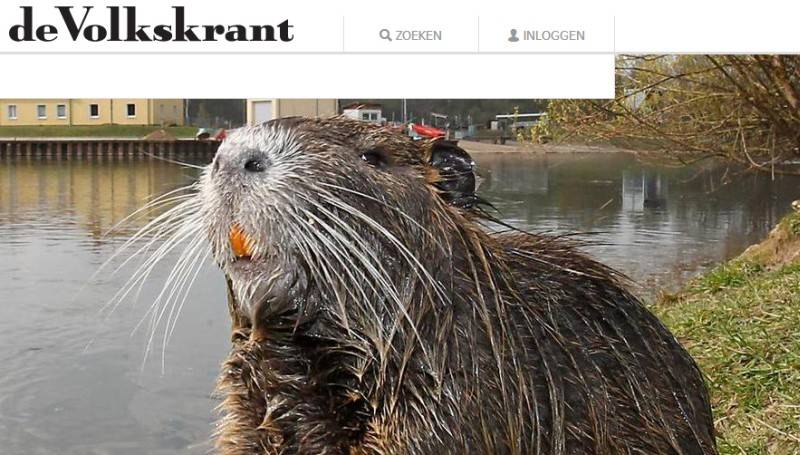 According to the “data” of this newspaper, a restaurant is open in Moscow, where burgers are served on the table. Inside the "pie" - nutria meat. Such food is supposedly a desperate step of the government: after all, the Russian people lack meat. The cause of the famine is the Kremlin’s response to Western sanctions: because of the counter sanctions, the Russian people remained practically without food. However, the way out was found: “cooks” prepared “old national dish” with meat of “rats” (nutria rats are named in the original material).

Essays on “rat meat” and other delusional essays about Russia are periodically printed in the leading newspapers of the Netherlands - “a country that is often presented as one of the leaders in the world press freedom ratings,” reminds Kornilov. “With enviable regularity, the Dutch media generate propaganda horror stories about Russia, frightening with their primitiveness and one-sidedness,” he adds.

“De Volkskrant” is not a yellow newspaper, but one of the leading publications of the Dutch establishment, the columnist indicates.

“A huge article was devoted, it would seem, to a completely harmless reason: a restaurant of southern Russian cuisine was opened in Moscow, in which many delicacies were served, including nutria meat. All would be fine, but the newspaper carried a loud headline on the front page: “Russia is switching to a rat” (yes, that was called nutria a rat). And constantly led to the idea that after Russia, in response to the "Crimean sanctions," responded to the West with grocery counter-sanctions, the Moscow middle class began to feel a terrible need for meat. That is now crushing, poor, "rat". "

Why do we need this new wave of crazy anti-Russian propaganda?

To maintain the image of the enemy and successful arms trade.

Dutch journalist Eric van de Beck, who visited Russia to attend the conference of the European Association for Journalism Education, held at the Faculty of Journalism of Moscow State University, notes that Russia is being demonized in his country and in the West. This is simply beneficial to NATO and arms dealers:

“Of course, they should think twice before invading Russia, because Russia is not Iraq. Simply, it is beneficial for the growth of the arms trade. This is beneficial for NATO. Because they need the presence of the enemy, and Russia is the most convenient candidate for this. ”

Obviously, we note, the Russians will soon eat all the nutria and go over to the meat of foreigners. The Dutch press must warn NATO and alien soldiers: they will be eaten first. Hungry Russian beauties have already left for Estonia.

Observed and commented on Oleg Chuvakin
- especially for topwar.ru
Ctrl Enter
Noticed oshЫbku Highlight text and press. Ctrl + Enter
We are
Results of the week. “In our cooperative, the board is always agreed”Syria: Americans scare themselves, and Asma Asad buys chairs
95 comments
Information
Dear reader, to leave comments on the publication, you must to register.