"It is above the mountain Alesha" ... 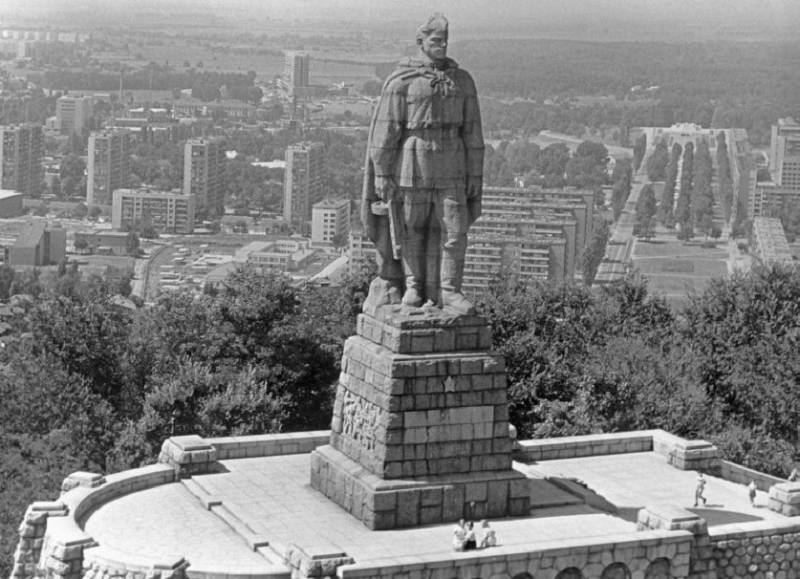 60 years ago, on November 5, 1957, in the city of Plovdiv, on the Bunardzhik Hill (Liberators' Hill), the grand opening of the 11-meter monument to the Soviet soldier took place.

The idea of ​​perpetuating the feat of the liberator army has been discussed in Bulgaria since 1948. Moreover, this initiative was not even the authorities, but the Bulgarian people. The people who met the Red Army with flowers in September 1944 of the year.

9 May 1948 was created a special public committee, whose task was to create a monument to the Soviet liberators in Bulgaria. At the same time, the first stone of the future memorial was laid. The place on the high hill was not chosen by chance - so that the monument could be seen from anywhere in the city.

A year later, an all-Bulgarian competition was held, at which a project called “Red Bogatyr” won. After some improvements and revisions, it was he who was destined to become that monument, sung in the Soviet song.

In 1954, the memorial was actually built. Its opening took place on the eve of the 40 anniversary of the Great October Socialist Revolution. Giant Soviet warrior looks at the Bulgarian city from the 6-meter pedestal. On the pedestal are two bas-reliefs: “The Soviet army beats the enemy” and “The people meet the liberators”. Climb to the figure of a soldier can be the stairs, consisting of one hundred steps.

Indeed, “Alyosha” became the embodiment of the image of all those Alekseev, Ivanov, Pavlov, Sergeev, Alexandrov and others, many and many, who died in battle with the Nazis.

However, fortunately, the man from whom Alyosha was sculpted survived the war and lived a long, fruitful life. This is the ordinary consolidated company of the Third Ukrainian Front, Aleksey Ivanovich Skurlatov. He served as the shooter of the 10-th separate ski battalion of the 922 rifle regiment. In one of the battles he was seriously wounded. He was even mistaken for a dead man, but by a miracle he survived. After that, he was transferred to the communications operators. Restored the telephone line between Sofia and Plovdiv. There Skurlatov met Metodi Vitanov, who worked at the telephone exchange and was an active member of the Bulgarian Resistance. These two fighters became friends.

It was Vitanov who gave the sculptors who worked on the creation of the monument, a photo of Skurlatov. Inspired by the image of a handsome guy, they immortalized him in stone. Moreover, Aleksey himself didn’t even know about it for a long time.

In 1962, the Soviet composer Eduard Kolmanovsky visited Bulgaria. He also visited Plovdiv, where, of course, he saw a magnificent monument. He had the idea to create a song dedicated to the fighters who liberated the brotherly country from the fascists.

The famous poet Konstantin Vanshenkin supported the idea and wrote poems for the song. In 1967, it was performed by the legendary ensemble of the Soviet Army named after Aleksandrov - just at the foot of the monument. The following year, it sounded at the 9th World Festival of Youth and Students, which was held in Sofia. Soon the song was translated into Bulgarian. She was picked up by Bulgarian singers - Margret Nikolova, Georgi Kordov, Biser Kirov and even Bedros Kirkorov.

This song became the hymn of Plovdiv. It sounded every morning, broadcast by the radio station of the city.

When Alexey Skurlatov, who lived in Altai, heard the song “Alyosha” on the radio, he joked: “Maybe it's about me? I was there. ” But the USSR authorities were looking for the person from whom the sculpture was created. Finally, they found and sent photos of him to Metodi Vitanov, who immediately recognized his friend.

... The black times of the collapse of the Socialist camp and the waves of "velvet revolutions" came. Anti-fascist heroes were declared “Soviet occupiers”. In 1989, the song “Alyosha” ceased to be the hymn of Plovdiv, and the monument itself was under threat.

They tried to demolish it three times - in 1989, 1993 and 1996. And three times the public of the city did not allow it. Live chains were organized around Alyosha, and the girls, as in a song, still gave him flowers.

In the year 1996, after another attempt to demolish, the Supreme Court of Bulgaria decided that this sculpture, as a monument to the Second World War, could not be destroyed. However, this does not mean that the danger to the monument has passed. He was repeatedly desecrated, put insulting Nazi inscriptions.

So, in March, 2017, when the vandals mocked the monument, the Russian Foreign Ministry sent a note of protest demanding to investigate the incident, but in July someone's dirty little hands again messed up. Unfortunately, such unconsciousness takes place not only in Bulgaria ...

3 November 2013, Alexey Skurlatov passed away. He was 91 year ... And the monument, which the inhabitants defended in a difficult struggle, still towers over the Bulgarian city, in the liberation of which he participated. And on Victory Day he will be brought flowers again.

"It is above the mountain Alesha" ...