Norway is one of the countries participating in the development of the F-35 fighter. To date, the Norwegian Ministry of Defense has ordered the assembly of 52 aircraft, some of which can be equipped with a braking parachute. At the same time, the first fighters arriving in Norway do not have parachute capsules. 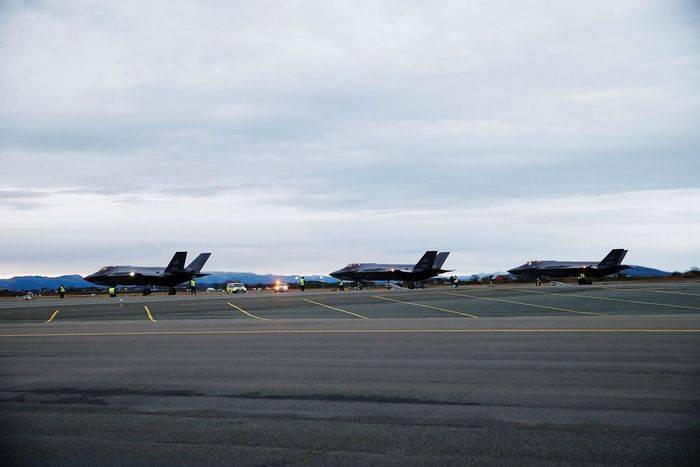 F-35 fighters at Earland Air Base.

The first three F-35A fighters for the Norwegian Air Force arrived from Fort Worth airfield (Texas) on their own. The planes took off in 6: 35 Norwegian time and arrived at Orland airbase around 15: 30. The three aircraft that received the onboard numbers AM-8, AM-9 and AM-10, will soon become part of the 338 squadron 138-th wing of the Norwegian Air Force, currently equipped with F-16 fighter jets.
On 10 November, the Norwegian Air Force planned an official ceremony to receive new fighters. In this case, the full staffing of the squadron with F-35 aircraft and its entry into combat duty are scheduled for 2019 year.

Lockheed Martin F-35 Lightning II - a family of fifth-generation fighter-bombers. As part of the F-35 program, it is planned to assemble about 3000 fighter-bombers, of which more than 2000 will be purchased by the US Department of Defense, another thousand units will be sold to countries participating in the development of the aircraft (Australia, Great Britain, Denmark, Italy, Canada, the Netherlands, Norway and Turkey), as well as countries that joined the procurement program later (Israel and Japan), reports "Warspot"

Ctrl Enter
Noticed oshЫbku Highlight text and press. Ctrl + Enter
We are
Do the Norwegians know the Russian proverb "cat scraping its ridge"?Accurate air discharge
173 comments
Information
Dear reader, to leave comments on the publication, you must to register.