Why Sobchak, Poklonskaya and Kadyrov want to bury Lenin 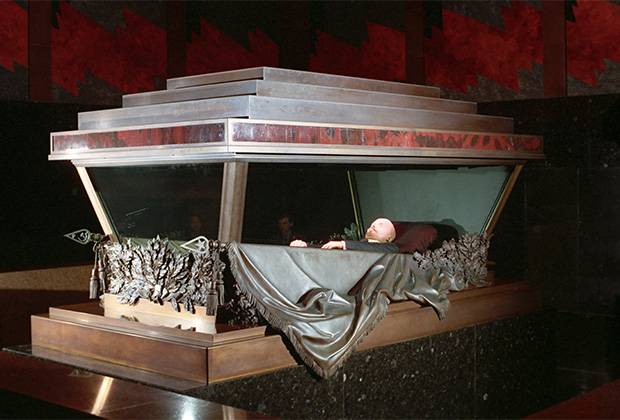 K. Sobchak, N. Poklonskaya and R. Kadyrov opposed Vladimir Lenin, proposing to remove the leader of the world and Russian revolution from Red Square. Obviously, this is due to two factors. First, the public needs to be blown up again, to divert from more pressing, serious problems that cause all of humanity and Russia to be corroded.


Secondly, after the 1985 counterrevolution - 1993. in Russia, “new nobles” —the masters of the country who seized people's property and power — matured and took shape. And they want to remove the symbols of Soviet civilization remaining in the Russian Federation, including the Mausoleum, in abundance. They believe that they took revenge. The first wave of de-Sovietization, under the cover of de-Stalinization, and in fact, de-Russification and Russophobia, took place back in 1990 - 2000-s. We saw a similar, but more terrible picture in the Baltic States, where the dwarf Nazi regimes were born, in Ukraine, where it came to civil war, in Georgia, in the republics of Central Asia. Trying to get rid of the "damned Soviet past," in the republics of the former Soviet Union (in fact, Great Russia, the Russian Empire), it is extremely harsh somewhere, like in Georgia, the Baltic States and Ukraine, gently, somewhat, in fact, encourages to all Russian people stories, language and culture.

State Duma Deputy Natalya Poklonskaya said: “To look at a corpse in the center of the capital is at least inhumane and not human. Is finding the dead as an exhibit for mass viewing can bring joy and bright feelings to someone's hearts? If the decision on burial is made, it means that a new stage in the development of our Motherland will come, with the page of the past turned over and the willingness to go further, remembering the lessons of history. ”

She was supported by the head of the Chechen Republic, Ramzan Kadyrov: “I am personally convinced that it is enough to stare at Lenin’s corpse. And it is high time to bury the leader of the revolution — this is both rational and humane. A whole research institute is working on the body of Lenin. Near his body is on duty round the clock security. It is wrong that in the heart of Russia, on Red Square, there is a coffin with a dead man. If the decision to bury Lenin’s body is made, it will be the most accurate from a historical point of view. In this case, the decision on the disposal should not be selective. Both the body of Lenin and the Naib of Imam Shamil Hadji Murad, whose head is still kept in the Museum of St. Petersburg, must be turned over to the earth. ”

On the one hand, This is a distraction of the public from the real, fundamental problems that are again facing Russia and the Russian people. In a similar situation, Russia was already 100 years ago. There is already a terrible and bloody world war on the planet. It has already killed hundreds of thousands of people, millions of people were injured and became refugees. Entire states were destroyed - Libya, Iraq, Syria, Yemen, Afghanistan. Next in line are the new states. The masters of the West again, as in 1914 and 1941. they unleashed a global slaughter to hide their managerial mistakes, set religion, civilization, countries, nations and cultures together, go into the shadows, and then on the ruins of the old world get all the gesheft.

Russia is already a participant in this war. We are fighting in Syria. Shoot Russian cities in the Ukraine-Ukraine. In the ancient Russian capital, Kiev, a bloody, gangster-oligarchic regime established itself that unleashed a civil war, Russians were set against the Russians, who were told that they were “Ukrainians”. This regime serves the masters of the West, fulfilling the role of a “ram”, which must draw the rest of Russian civilization into an endless, exhausting slaughter. Meanwhile, the United States, NATO, and the West are preparing military bridgeheads in the Baltic States, Scandinavia, Poland and Romania, and already in Ukraine for throwing into the rest of Russia. The signal should be the “Russian Maidan”, an attempt by the oligarchy and the Westernizers to “negotiate” with the West by surrendering the Crimea, Kaliningrad, the Kuriles, and the nuclear arsenal.

At the same time, in Russia itself, as well as at the beginning of the 20th, the core issues were ripe and over-ripe. Their essence is To be or not to be. Russian civilization, Russian superethnos need a goal of being. We cannot simply exist, slide into empty consumption, leading to the complete degeneration of human essence, like Western societies. If materialism and a consumer society prevail in Russia, hedonism (in fact, a society of extermination and self-destruction), there will be no Russia-Russia and a Rus-superethnos. In the genetic code, the program-matrix of the Russian super-ethnos, social justice, truth and ethics of conscience (participation in the highest truth and justice) are laid. Hence all the other issues and problems - the consistent destruction of the education and health care systems, demography, physical and mental degradation of the nation, the issue of property (justice), the need for new industrialization, a breakthrough into the future with a new titanic program of space exploration, the question of relations with the West - we “Junior partner” to run errands, semi-colony reservation, with a fading great nation or an independent civilization and superpower, etc.

On the other hand, we see the will of three representatives of the “new nobility” of Russia. Ksenia Sobchak is a typical representative of the ultra-liberal wing of the Russian Westernizers-liberals and the new bourgeoisie. They owned all the power in 1990-2000-s. Sobchak, Gaidar, Chubais, Yeltsin plundered (privatized) the country, the government and the national wealth. Lost almost all positions on foreign policy lines. They brought tremendous wealth — they could have spent more than one shock five-year plan, making Russia one of the most prosperous countries in the world. Destroyed the best education in the world. Under their rule, millions of Russian people died out, even more were not born (the so-called depopulation, in fact, the extinction of the superethnos). The national economy was turned into a "pipe economy". The overwhelming majority of the people were put on the brink of survival. The greatest culture in the world is successfully dumped in a cesspool. You can list for a very long time. This is a topic for the modern history of Russia - the volume of unpunished crimes and the betrayal of a great nation and state.

Now, this “new nobility” detachment, against the background of world war and the reluctance of the “power wing” of the Russian top to finally bend before the masters of the West, wants to launch a new wave of de-Sovietisation (at the same time, de-Russification, because the Russians are the “genetic scum”). That is, to cause a sharp split in Russian society against the backdrop of the outbreak of world war. It should be remembered that our people are based on workers and peasants, and after a total stupor of the people in 1990-2000-s, there is now a rollback. More and more people are beginning to understand and appreciate the achievements of October, the Soviet civilization and the mighty Soviet Union. To recall that then a society of justice was built for all, and not just a narrow circle of “chosen ones,” a society of service and creation, where there is no place for parasitizing a narrow social stratum over the masses. That then we were a superpower, we had the best armed forces in the world, the best education in the world, we were the most reading nation in the world. People, having devoured the “charms” of capitalism, the consumer society and the pursuit of pleasures with the gradual abandonment of humanity, seeing the gradual introduction of “monetary relations” in kindergartens, schools, universities, medical institutions, begin to realize that in the USSR people were really protected.

Another squad of the current “new nobility” is the new monarchists, Nicholas the Second's fan club, like N. Poklonskaya. They are immersed in the myth of the crunch of the French roll. Ostensibly, the Russian Empire was the most prosperous and spiritual nation in the world. But evil red commissars (bribed by the Kaiser or American bankers) came and crushed the great empire. They slaughtered the best part of the society - aristocrats, noblemen, officers, clergy, intellectuals, junkers, gymnasium students, etc. It remains only "genetic trash". The Bolsheviks built a "prison of nations" and there they rotted out and destroyed the rest of the best people of Russia, the rest of the people turned into "hereditary slaves." In general, the myth on the myth.

These gentlemen fiercely hate the Soviet past, in this they are similar to Western liberals. They want to destroy all traces of the Soviet civilization, in fact, to destroy the highest achievements of the Russian people. What this road leads to, we see very well in Ukraine-Ukraine. Neo-Nazi Bandera is the next level of neo-monarchists. In their fierce hatred of everything Soviet, they will destroy all the best Russian. There will be "the economy of the pipe" - with the king drove agricultural raw materials, now - hydrocarbons, metals, timber, again grain, diamonds. People will try to drive in churches and mosques, with the total fall of the spirituality of society - against the background of strip clubs, army of prostitutes, drug addicts, organized crime, abomination, flourishing on TV, etc. The contenders are ready. Part of the Russian elite rush, receives noble titles, various awards. He is preparing for the Renaissance, where the "nobles" have their own separate, elite neighborhoods, villages, schools for children, etc.

Another detachment, represented by the head of Chechnya R. Kadyrov, is ethnocracy. It flourishes with every weakening of the empire. For ethnocracy, social justice, the Soviet project is death. Her path is an archaic, an attempt to drive a person into the dense past, into neo-feudalism and even deeper into primitiveness. We can again see the most vivid examples on the fragments of the USSR. In almost all the republics of the USSR, which gained independence in the 1991 year, nationalism flourished, right up to the most cave forms. In the Baltics, these are the Nazi regimes, in Turkestan - Islamization, de-Sovietisation, de-Russification, with the power of the new khans and bais. And the hatred of the Russian (Soviet) "invaders" who led these margins from the tribal and feudal relations to common prosperity, within the framework of a single multinational Russian civilization. Hatred of a common development project aimed at all people, not excluding their racial, national, tribal, religious or socio-economic basis. All the problems of separatist Bantustans are blamed on Russians and Soviet ones. Like, looted, occupied, destroyed, forced to abandon the national and religious identity.

In general, the policy of ethnocracy leads to a new collapse of the Russian civilization into “independent” Bantustans. ” Hence, the problem of the Russian language in Tatarstan, etc. The enemies of the Russian people "need to rock the boat," push the Russians against the Tatars and other ethnic groups. All this we have already passed, it is enough to read the history of the Civil War. The national question is one of the doors to inferno, to darkness and the sea of ​​blood.

The new Soviet society of service and creation, social justice, destroyed the archaic, the desire to become a caste of "chosen", "new nobles" ruling "genetic scum". Hence the hatred of the current "elected" to Lenin, Stalin, the Soviet project as a whole and the desire to bury them once and for all.

Ctrl Enter
Noticed a mistake Highlight text and press. Ctrl + Enter
We are
Project "ZZ". Sobchak and the front "dissatisfied." The people are "tired" from PutinResults of the week. "Well, do not change me because of every idiot!"
373 comments
Information
Dear reader, to leave comments on the publication, you must to register.