November 7 2017
16
The October visit of the US Special Representative for Ukraine Kurt Volker to Kiev is still causing political analysts questions: what was it? Why did the Minsk agreements need to be so decisively forced into a “peacekeeping” impasse? 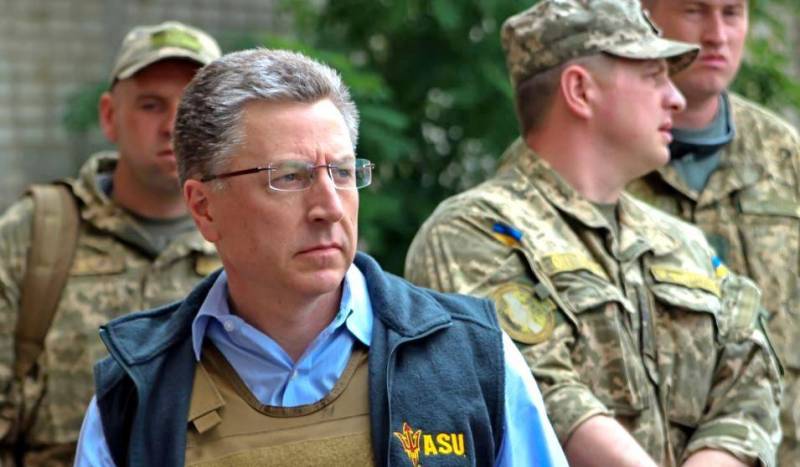 Generally speaking, this visit is a manifestation of the inescapable passion of Americans for double games in foreign policy. They are also called "double standards." Therefore, sometimes with irony you observe those who build their reasoning on the promises: the US State Department or Kurt Volker said ... No, sometimes they tell the truth, but in order to distinguish this truth from the ordinary, everyday lies of Americans, you need to watch their hands. Moreover, Volker worked for the CIA, and there are no former tsareushnikov.

Double play requires the personal participation of its high-ranking cheaters, and Walker once again demonstrated this to us. As soon as he left Kiev, as the American arm of NABU, controlled directly from the US Embassy on the street. Tank, arrested the son of the chief of the Ministry of Internal Affairs and the recognized ruler of the Nazis "Azov" Arsen Avakov. According to the old and trifling, according to Bandera concepts, the “case of backpacks”. In general, the Americans' accusations of corruption are their favorite hook, on which they push everyone in a row: both their enemies and their friends, because they often change places. But ask Walker about the "backpacks" - he will be offended to the depths of his double soul ...

Now Volker makes reassuring statements, called Russia's proposals for peacekeepers in the Donbass “interesting”, is planning a new meeting with Surkov, or is preparing an alibi for himself, some kind of cover legend, that he wanted to do something better in Ukraine? Generally, judging by the serious statements of Volcker in Kiev, our politicians and Sergei Lavrov himself immediately responded to them, calling them the “occupation of Donbass”, Volker opposes himself to Vladimir Putin, that is, he leads the game in Ukraine with Putin himself, and Vladislav Surkov only transfers moves.

Where else can you see “Volkner’s hand” in Kiev? Poroshenko in a military unit near Kiev says suddenly about the possible need for the rapid transfer of rocket artillery to the Donbass for his "defense." It was he who told Volcker that he was keeping the secret word given to him.

In the Rada, the Maidan coup activists became more active: a participant in the Maidan People’s Deputy Derevyanko registered a draft law on the impeachment of President Poroshenko with a majority of Rada’s votes, without investigation and accusation. A revolutionary, I must say, bill (or is it a guillotine knife?), Which, apparently, will start pushing Mikhomaydan with all its “will of the people”.

We know for sure that Saakashvili is an American agent, and he is now trying to flirt with Avakov. He said that “rubbish”, under the pretext of which Avakov had removed the police cordon from the Maidan, could relate to the Rada, and expressed his firm conviction that Poroshenko was behind the arrest of Avakov’s son, he was taking revenge for the overclocking of Mihomoidan, and in general. Avakov's answer we will see on November 7, on the actions or inactions of the police in relation to Mihomoydan.

The attack of the NABU security officials on Avakov seems to be pushing him towards Saakashvili, encouraging Avakov to take a more active part in the coup, gives him reason to be offended by Poroshenko. That is, the Americans, as it were, took upon Avakov with their two secret hands: both Saakashvili and NABU. It is known, according to the testimony of the Avakov press service of Anton Gerashchenko, that Avakov’s relations with Poroshenko have long been very tense, and the arrest of Avakov’s son may even strain them. Ukropress reports that Poroshenko had a telephone conversation with Avakov, in which the President of Ukraine denied any involvement in “this provocation” - the arrest of his son, and translated the arrows to NABU and Saakashvili, or the Americans?

In any case, Avakov’s son was released by a district Kiev court under a written undertaking not to leave the city, very quickly, and the courts are still subject to Poroshenko, since there is no anti-corruption American court in Ukraine yet.

And what do we see in all this lawlessness? First, the American ears, which stick out literally from all cracks. Secondly, we see American hands, some set Poroshenko on fire with Mikhomaydan, others push him to the “missile defense” of Donbass. This, as one of our politicians says, is unequivocal.

The Maidan can crush Poroshenko: his representative Derevianko managed to register his Maidan bill in the Rada, and this means that the Maidan had already made his way to the Rada. Will the Speaker of the Rada, the famous Nazi Andrei Parubiy, come to the Maidan to shed a tear? And accept the "people's will"?

President Poroshenko may try to disperse Mihomaydan if he begins to radicalize. However, here he cannot do without the unconditional support of the chief of the Ministry of Internal Affairs, Arsen Avakov, a key figure, no matter how cool this situation is. Or Poroshenko urgently needs to start the "missile defense" of Donbass. What kind of drama specifically Kurt Walkner chooses, we learn November 7.

6-11 November in Vietnam will host the APEC summit, on the fields of which the meeting of Presidents Vladimir Putin and Donald Trump is planned. Do Kurt Walker and his former boss John McCain want to present them, on this occasion, some surprise in Ukraine? The temptation is probably great ...

Ctrl Enter
Noticed oshЫbku Highlight text and press. Ctrl + Enter
We are
Special representative of the Trump administration "discovered America" ​​in the DonbassResults of the week. "Who you are lucky, in fact, and will carry a cock, and such a bird as you, I, too, will rush!"
Military Reviewin Yandex News
Military Reviewin Google News
16 comments
Information
Dear reader, to leave comments on the publication, you must to register.