German politics on the pause button

November 8 2017
4
The elections to the German Bundestag in September created political turbulence in the country, in which the new government is formed not so much by the proximity of the programs and objectives of the parties claiming to run the country, but by simple arithmetic counting of the votes of these parties in the Bundestag to get a parliamentary majority. Thus, an unusual configuration in the German policy was formed from the block of conservative parties of the CDU / CSU, the FDP liberals and the alliance of diverse groups united under the slogans of nature protection and state control of the environment - Soyuz-90 / Green. 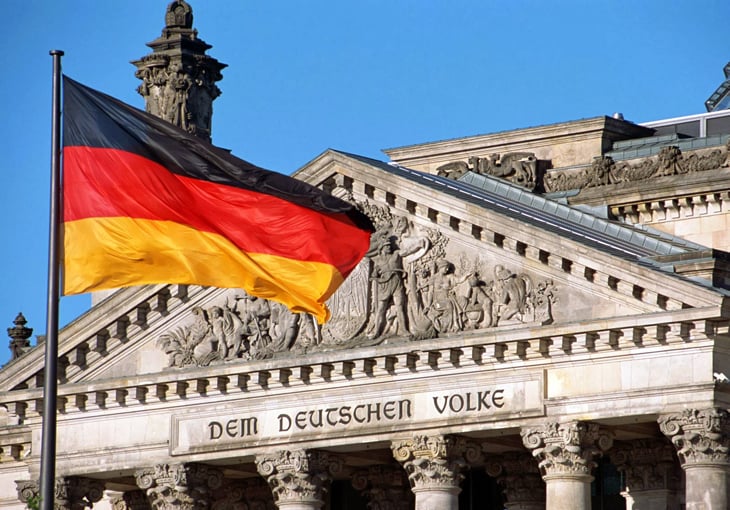 When there is no agreement in comrades

Experts from the very beginning expressed doubt about the viability of such a coalition, but German Chancellor Angela Merkel reassured the Germans. She declared her readiness to search for compromises and promised in December to present the country with a new coalition government. Merkel believed it.

The events that followed seemed to confirm the correctness of the chancellor. For example, at the first meeting of the new Bundestag, which dealt with organizational issues, deputies of the parties that declared to the ruling coalition voted jointly. They were able to hold their representatives on key posts in the parliament and unanimously besiege the nominee “Alternatives for Germany”, who tried to get the post of vice-speaker.

At this agreement in the new coalition has exhausted itself. Apart from agreeing to put in brackets of the negotiations on the formation of the government all the acute issues and insurmountable contradictions so far. It happened on Friday, November 3, when the parties managed to adopt a joint document on the problems of Germany’s foreign policy and security.

It ignored such important foreign policy issues as the conflict in Ukraine and sanctions against Russia. This is one of the most controversial positions in the coalition. The Bavarian CSU and FDP liberals are in favor of lifting the sanctions. Green and Christian Democrats insist on their preservation.

So far, they agreed that they had fixed their desire to “have good relations with Russia,” and expressed their readiness for dialogue while unconditionally respecting “international law and the unity of the West.” That of this verbal construction will turn out, it remains only to guess. After all, the Green in the coalition is being punished the post of Minister of Foreign Affairs, and with it the opportunity to pursue its line in formulating the foreign policy of Germany. And not only.

At party consultations on the formation of the government, small parties sharply criticize, for example, the construction of the Nord Stream-2 gas pipeline. The representative of the 90 / Green Party Oliver Krisher stated that “the project is slowing down renewable energies and is a stumbling block for Europe ... it increases dependence on autocratic President Putin”.

Liberals from the FDP adhere to a similar position. True, they focus on the growing dependence of the European Union on Russian energy resources and the desire to work out a common European energy policy. That is, to a greater degree take into account the interests of those who oppose the construction of the gas pipeline of the Baltic countries and Eastern Europe.

The mood of the younger coalition members was even passed down to Christian Democrats. The representative of the CDU, Norbert Röttgen, who previously headed the Bundestag Committee on Foreign Policy, unexpectedly stated that the construction of the second line of the gas pipeline “should be considered on the basis of the interests of not individual enterprises and, moreover, not private individuals”.

Röttgen seemed to have forgotten that the government of Angela Merkel had already expressed support for the Nord Stream-2 gas pipeline project. So this is not at all a private matter of “individual enterprises”, but a new opportunity for Germany to receive cheap pipeline gas and then distribute it across EU countries, turning into an energy hub of the alliance.

The case of Röttgen shows that in search of a compromise with junior partners in a possible alliance, the Christian Democrats and their Bavarian partners can strongly retreat from their program goals. And then, as they say, the tail will start to control the dog. The plans and goals of small parties will become a fact of practical policy of the German government.

Liberals and Greens understand this very well and insist on their own. After all, the choice of senior members of a possible coalition is small: either form a government from this party combination, or go to new parliamentary elections, the result of which may become even more uncertain.

As a result, the range of controversial issues remains unchanged. In addition to the problems already mentioned in relations with Russia, there are quite a lot of issues on the internal German agenda. Disagreements are caused by spending on defense and arms exports, public investment and tax distribution, attitudes to the problem of migrants and reduction of carbon dioxide emissions into the atmosphere, etc.

In particular, “Greens” insist on a complete “rejection of coal” and the gradual withdrawal from circulation of all 148 coal-fired power plants in Germany, and 20 of the dirtiest of them - to close immediately. Equally categorical junior partners in the coalition and on other controversial issues.

This prompted the chairman of the CSU deputies group, Alexander Dobrindt, to state in the Bild newspaper that the “Greens” provoke a failure of the coalition agreement, show “lack of interest in forming a government”. Dobrindt should add to what was said: now the term of swearing in the new cabinet of ministers of the Federal Republic of Germany will go beyond the September forecast of Angela Merkel. It is unlikely that for the remainder of the year the parties will have time to agree on all disputed issues, conclude a coalition agreement, approve it at their congresses, and then form a government.

With the prefixes "Acting"

Today in Germany, a practically incompetent cabinet. He, in fact, put on the button "pause". First of all, because from the 24 of October Angela Merkel herself got the prefix "acting". The Bundestag has so far only instructed her to form a government. With the same consoles work together with. Chancellor Ministers of the Social Democratic Party. They have already lost the right to any initiative and are quietly waiting for their replacement.

Wolfgang Schäuble replaced the position - the political heavyweight of the Christian Democrats, the long-term Minister of Finance of the Federal Republic of Germany and the right hand of Angela Merkel. Now he stood at the head of the Bundestag. Meanwhile, Schäuble defined not only the financial policy of Germany. His word was weighty for the entire European Union. He was the initiator of the EU anti-crisis programs, measures to strengthen the euro and reduce the debt burden in the countries of the alliance.

Now this niche of German politics is empty. The other important not only for the Germans, but also for all Europeans leverage influence of the German government on Europe weakened. We can observe this by the example of Ukraine. The “Norman format” has quietly collapsed here. The initiative passed to the representative of the American president.

Not everything in his actions correlates with the interests of Europeans. At least, the course towards the supply of lethal weapons and the aggravation of the Ukrainian conflict, Europe definitely does not need. She, and especially Germany, is quite satisfied with the existing weakening of Russia by sanctions. War with the Russians in the plans of the Europeans today is not included.

On this account, of course, there is no single position. Poland, for example, would not refuse to war with Russia by someone else’s hands. Warsaw is now splattering with initiatives. In the midst of an election campaign to the Bundestag, Polish leaders demanded reparation from Germany for the losses of Poland during the Second World War.

Then, contrary to the position of Germany, the Polish government supported the expansion of the American military presence in the region. Finally, the leader of the ruling conservative party Law and Justice, Jaroslaw Kaczynski, announced a new Polish policy of “returning sovereignty from Brussels to Warsaw,” which already threatens the very foundations of the Union.

Demarche Kaczynski was provoked by the criticism of Poland for its refusal to accept refugees, for the destruction of democratic institutions (the government subjugated the media and the courts). Not least, the position of the Polish politician was influenced by the insufficient, according to Kaczynski, financing of Poland from the European budget.

The Germans, occupied with internal problems, were still forced to answer. On the air of the TV channel ZDF, it was done by the Minister of Defense of Germany, Ursula von der Lyayen. “We must support a healthy democratic resistance of the younger generation in Poland,” said von der Lyayen, opposing the current Polish government to the opposition. “Our task is to maintain discourse, to argue with Poland and Hungary.”

You can add a comma to this list with half a dozen EU countries who are dissatisfied with the decisive word of Germany in the alliance. When this word died down, at the proscenium of European politics, people from states not so long ago attributed by Angela Merkel to “second-rate countries” became more active. Now they have decided to emphasize their own significance.

So the Poles snapped at the remark von der Lyayen. Polish Foreign Minister Witold Vashchikovsky was delighted: "We caught the German politicians trying to interfere in the internal affairs of Poland." No one answered the statement of Vashchikovsky in Germany.

In Berlin, now is not up to Poland. Here negotiations on the establishment of the ruling coalition are stalled. The end of this is not yet visible, which to some extent destabilizes the situation both in Germany and in Europe as a whole. After all, the entire European Union was taken hostage by the ambitions of the German parties, who unexpectedly received the opportunity to occupy the power offices. The German government crisis is no good to him.

Ctrl Enter
Noticed oshЫbku Highlight text and press. Ctrl + Enter
We are
"Jamaica" without Usain BoltThe collapse of the CDU / CSU coalition and the end of Merkel's career
Military Reviewin Yandex News
Military Reviewin Google News
4 comments
Information
Dear reader, to leave comments on the publication, you must to register.